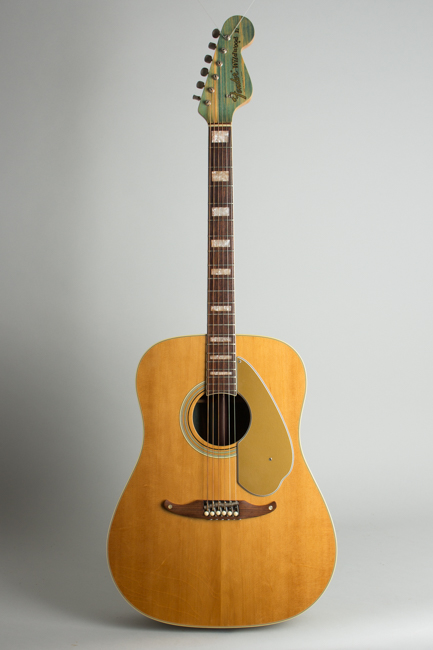 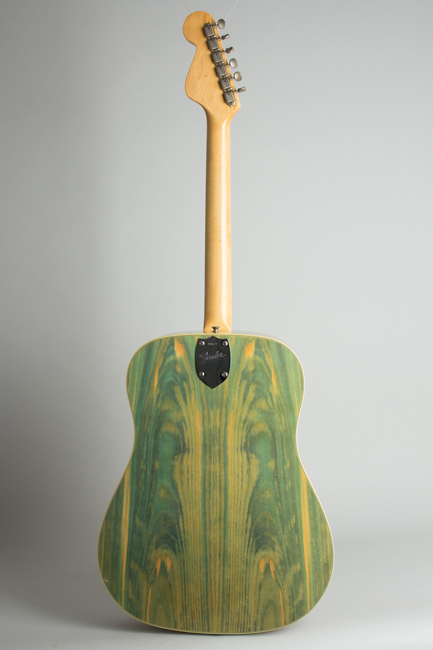 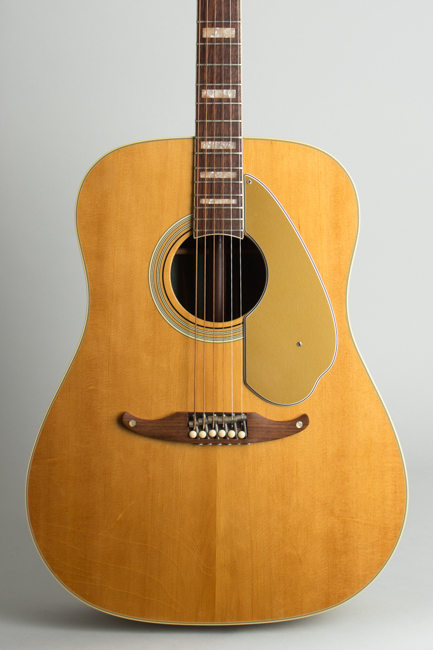 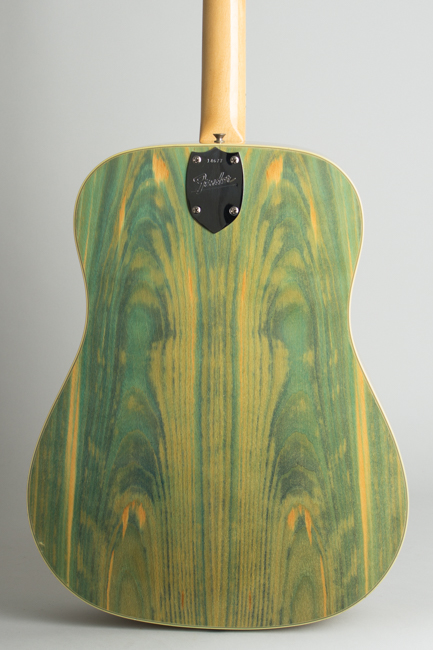 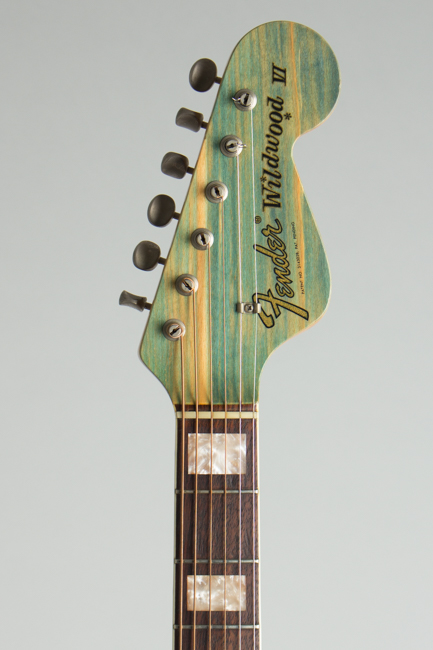 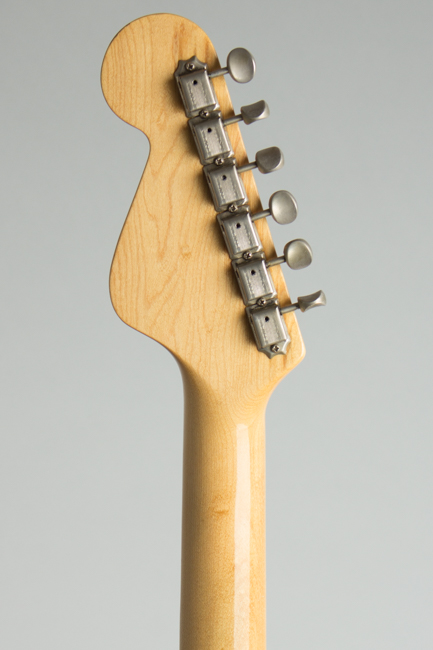 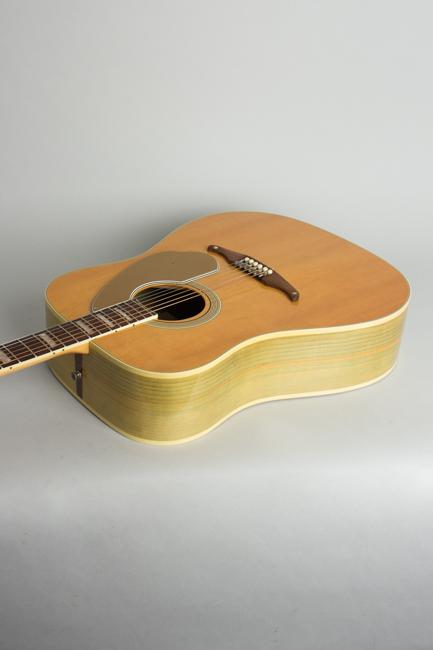 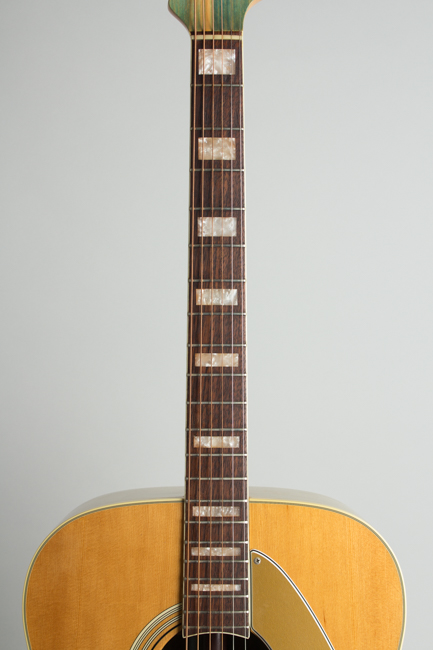 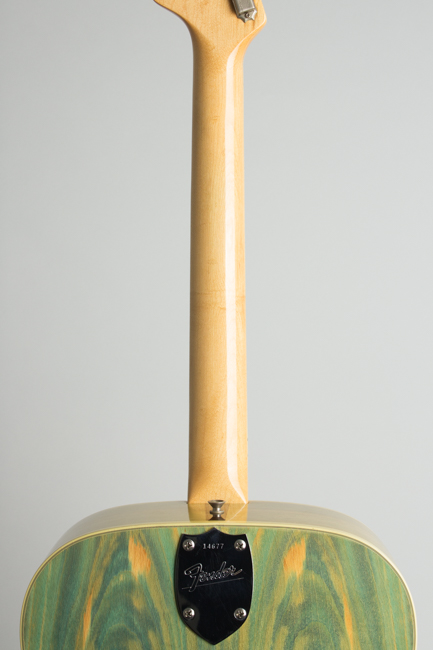 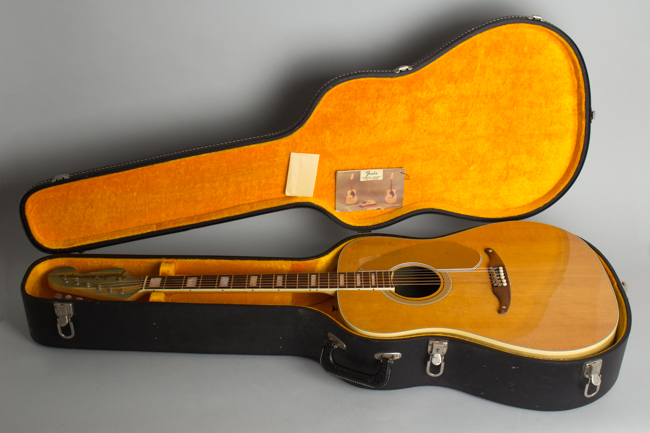 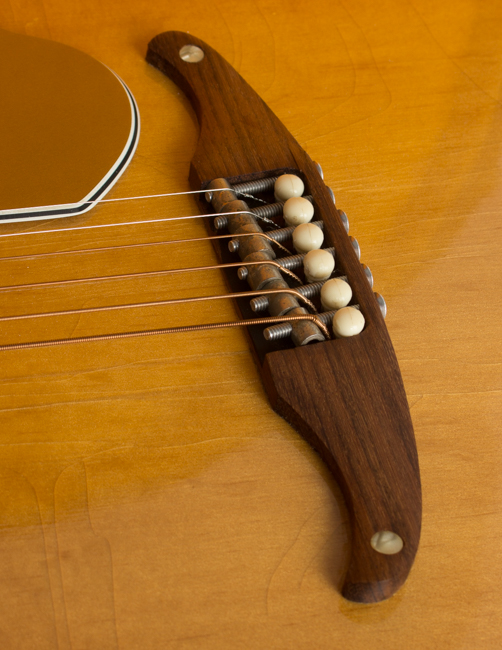 In the later 1960s CBS/Fender were more open to experiment than some would give them credit for. A number of interesting instruments emerged from this period, and this Wildwood VI flat-top is a prime example. The line of acoustic flat-tops with Fender electric style necks that Leo Fender and Roger Rossmeisel had cooked up in 1963 had been doing OK, but had not converted many players away from traditional Martins and Gibsons. Suppose they were dressed up in a "wild" new finish nobody else had? The result was the Wildwood series, one of the odder chapters in Fender history.

Sometime before 1966, Rossmeisel apparently became aware of a Danish inventor who developed a way to inject dye into the roots of growing beech trees to color the wood prior to harvesting. You could then make a guitar out of the uniquely color grained wood, of which each piece was different!

This "Wildwood" idea was eagerly embraced at Fender; oddly, perhaps, it was not applied to the company's highly successful solid-bodies, but the new semi acoustic Coronado series and, most famously, the flat-tops. The top-line Kingman acoustic was the model selected and a number were built using the different colored woods CBS purchased, and given a new Wildwood model name. Fender initially assigned Roman numerals to identify each variant; the first line featured six different colors hence models noted as I-VI. By 1968 this was reduced to three color choices.

This blue/green-hued Fender "Wildwood VI", like other Fender acoustic guitars of the time, uses basically the same neck as Fender electrics bolted to a huge solid block inside the acoustic guitar body. The maple neck has a bound, block inlaid rosewood fingerboard with the familiar single-sided headstock and truss rod adjusted at the heel. They are functionally the same but not interchangeable with solid-body necks.

A thick cylindrical "resonator bar" inside the body connects the neck block to the tail block of the guitar. This was intended to deflect string tension from the top, supposedly allowing it to be built lighter. This feature has been called the "Broomstick" by players, and the entire Fender flat-top line is sometimes referred to with that word! Although the Wildwood timbers are often described as veneers, this guitar is built with SOLID dyed beech back and sides, with a pronounced grain pattern.

The serial numbers on these are spotty and do not follow the standard Fender series; the flat-top acoustics use a different shaped neckplate. This guitar is labeled a Wildwood VI on the matching colored headstock and has the older Pre-CBS style Kluson tuners on the lacquer finished bound neck. These features indicate it was likely assembled between late 1966 and mid-1968, even though apparently not actually sold until 1971! By that year the entire acoustic guitar line was discontinued, and it's not much of a stretch to think this guitar sat in stock for several years before finding a buyer.

Today this is a guitar that just has to make most folks smile; if not then you're taking things too seriously! The greenish back and sides have a slightly psychedelic look, and really scream "1960s" even more than your typical and now timeless Fender solid-bodies. Fender acoustics were feathered by a number of prominent performers in the later 1960s, even if now largely forgotten. The Wildwood was the top of the line, listing at $385 (without case) and priced higher than all but the most expensive solid-bodies. Many Nashville performers used them at the time, or at least posed with them. Charlie Pride played a green Wildwood like this onstage during the late 1960s but this is most memorably the EXACT model Elvis played in the film "CLAMBAKE"! Hey that's endorsement enough for us!

This guitar is simply stunningly well-preserved, both cosmetically and structurally, and 100% original. It shows virtually no play wear, just some minor lacquer checking to the top and a few tiny handling marks here and there. It is also the best playing and sounding one we have heard in many years, with a surprisingly deep and powerful tone. It shows no signs of the folding inward and attendant top/bridge distress that many 1960s Fender acoustics have suffered from.

This Wildwood VI is housed in its original yellow-lined Victoria HSC, also spectacularly intact still with the little color warranty booklet in the pocket. The first owner sent in the warranty card in August 1971 and notated a lot of information inside the front cover; unfortunately he did this in red pen and over the last 49 years that ink leeched into the paper leaving the front cover now somewhat discolored. Still cool to have, the cherry on top of this off-kilter and slightly head-spinning piece of CBS/Fender history. "The most exciting and compelling instruments in the guitar world today" Fender claimed, and who are we to dispute it? Excellent + Condition.
×