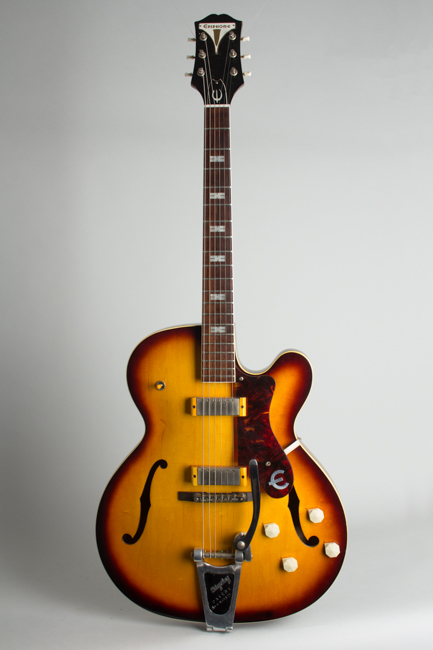 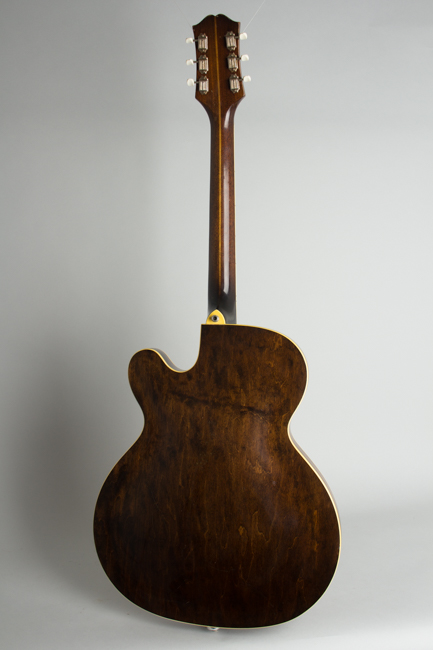 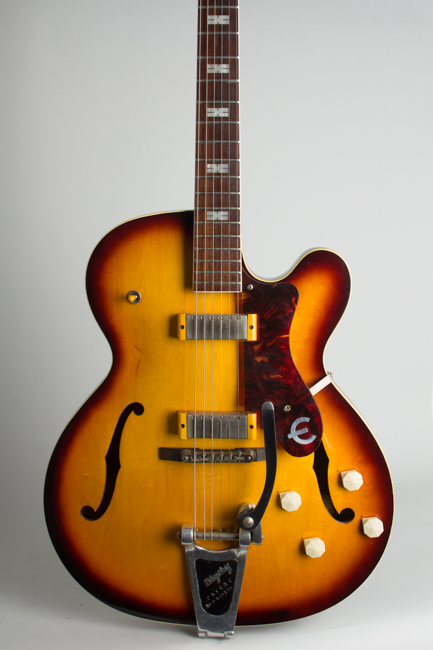 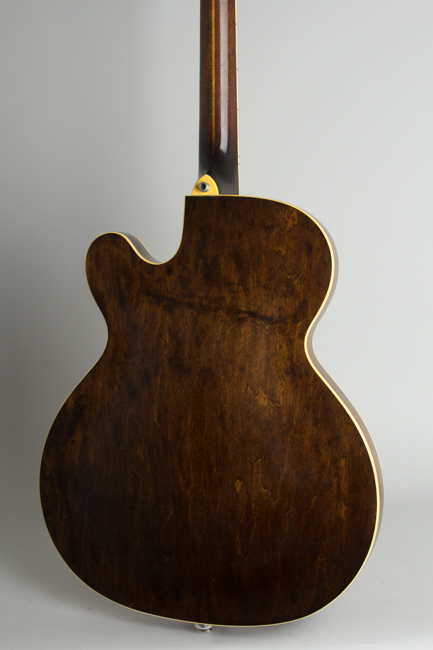 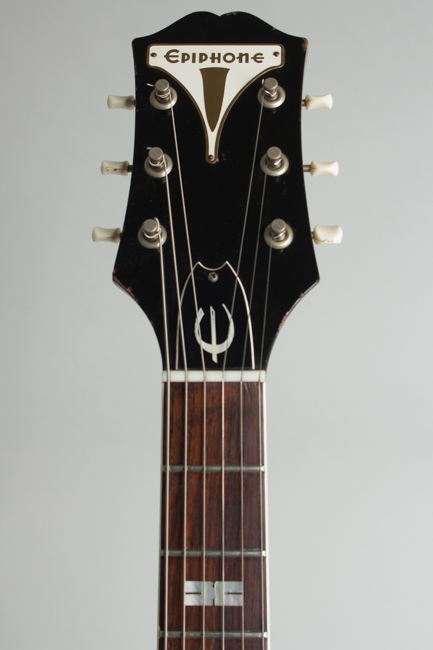 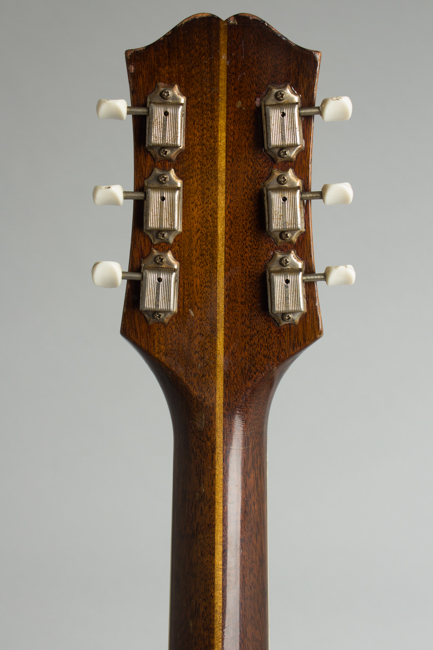 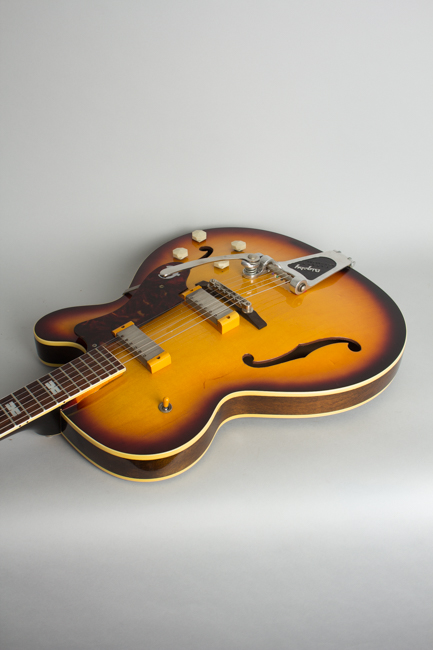 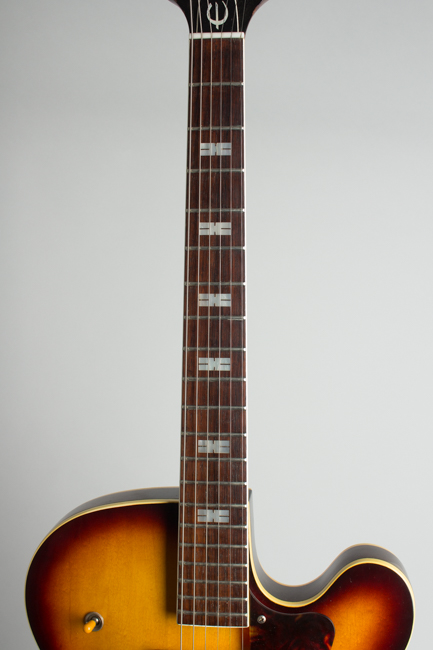 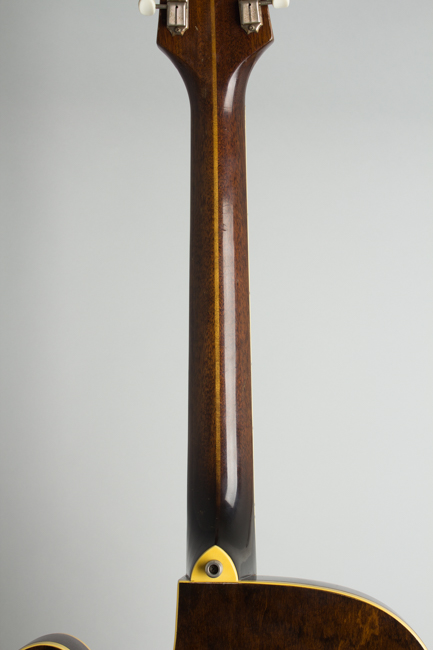 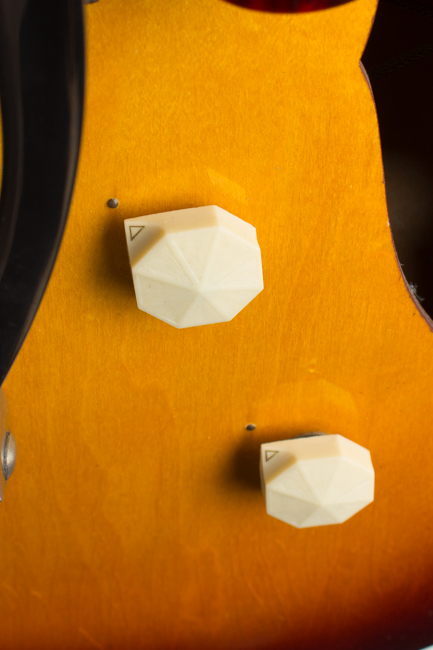 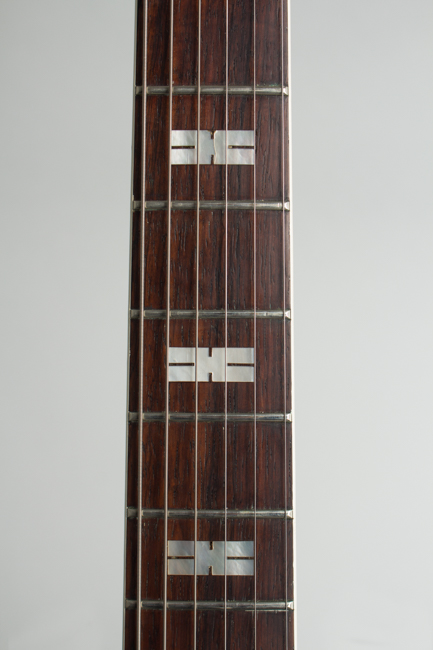 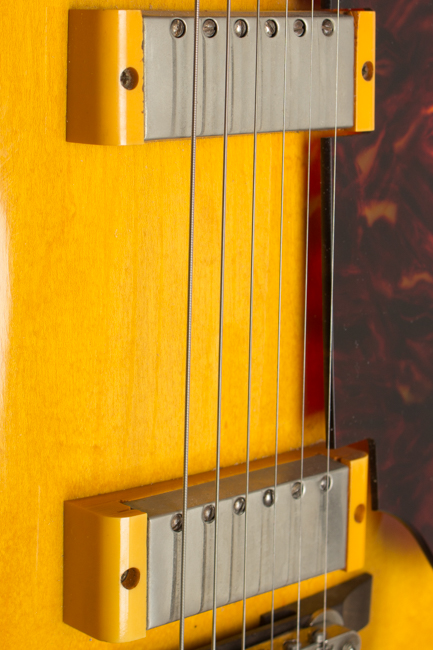 This interesting thin-rimmed hollow body guitar is one of the earlier Epiphone-branded instruments made in Kalamazoo, as Gibson was re-starting the defunct brand they had purchased in 1957. The first-generation Zephyr is a fairly rare instrument built only from 1959 into 1964 and one of the less well known Gibson-made Epiphone models. Available figures indicate just over 100 of these shipped in 1960, the second production year. Samples of the new Epiphone line had been first shown at the July 1958 NAMM show, but orders were scarce and production slow to get up to speed.

This Zephyr was a midline model in the 1960 Kalamazoo Epiphone line, roughly the professional equivalent to the ES-175D although with very different specs. The Zephyr has a distinctive set of features and does not play or sound like any other Gibson-made guitar from this era. It is built on an unusually wide but thin-rimmed fully hollow body, combined with a long 25 1/2" scale neck. Gibson's ES-350T and Byrdland are 17" wide and fully hollow, but have short 23 3/8" scale necks. The budget ES-125TDC is smaller at 16" wide, with a 24 3/4" scale.

This Zephyr is built on a 17 3/8" wide but only 1 7/8 inch deep single cutaway all-maple body; from the front it looks like an older Epiphone shape but that company never built thin-body guitars. The single-bound body has a ambered yellow/brown sunburst on the top and dark mahogany finished back and sides. The serial number on the blue label inside is part of a distinct but short-lived A-series started for the new Epiphones, discontinued in 1961 as they were absorbed into the new Gibson number series.

The laminated mahogany neck has a V profile unlike anything Gibson was doing in the late 1950's; it is actually an old Epiphone archtop blank from years earlier repurposed. Older Epiphone parts sent up to Kalamazoo were used on these new models as long as they lasted. The rosewood fingerboard is inlaid with small segmented blocks and bound. The neck is fitted with a Gibson truss rod under the new plastic "E" logo cover. The headstock had a metal logo plate pinned to the face that Epiphone had been using on electrics since the 1930s, with Kluson Deluxe tuners typical of Gibson. The elevated tortoise celluloid pickguard has an "E" epsilon logo on the lower corner.

As is typical for a mid-line instrument, all hardware is nickel-plated. The most interesting feature is a set of original "New York" pickups inherited from the old Epiphone stock. These look like a sort of humbucker with the small poles on one edge, but are solidly single coil under their metal covers. They offer a unique sound, fairly microphonic but brighter than anything from Gibson in 1960 with a snarly edge when overdriven. They are controlled by the standard Gibson 4-knob, one switch electronics rig topped off with white pointer knobs, a type used by Epiphone since the 1940s.

The E-312T Zephyr listed at $245 in 1960, without the case. The instrument has a sort of "feeling your way" aspect about it, and as it turned out the new Epiphones that would be the most successful in the 1960s were essentially the re-branded Gibson models like the Casino/ES-330, not the ones that recalled the earlier New York models.

These early Zephyrs are fairly rare; this is the first one we have ever had. Even many veteran players have never tried one. The large thin body is fairly comfortable once one gets used to it, and the pickups while rather non-Gibson in sound have their own charms. This one has an added Bigsby and makes a great Rockabilly guitar, a blind alley in Gibson history perhaps but an entertaining one at that.

This is a nice clean guitar overall, showing some light play wear but no signs of heavy use. The finish has some small dings and scuffs but really that's about it. It remains largely original except for the added later Bigsby tailpiece and a repro Tune-O-Matic bridge; the original trapeze tailpiece and an aluminum Bigsby bridge are included. The strap buttons are not original; the one at the heel would also be a later addition. The truss rod cover is a '60s Epiphone piece, but appears a bit later than the guitar. The frets show some minimal wear, but nothing to affect playability. This is a lovely instrument, a bit unusual in feel and sound but a cool piece and excellent player if you dig the vibe! Overall Excellent Condition.
×