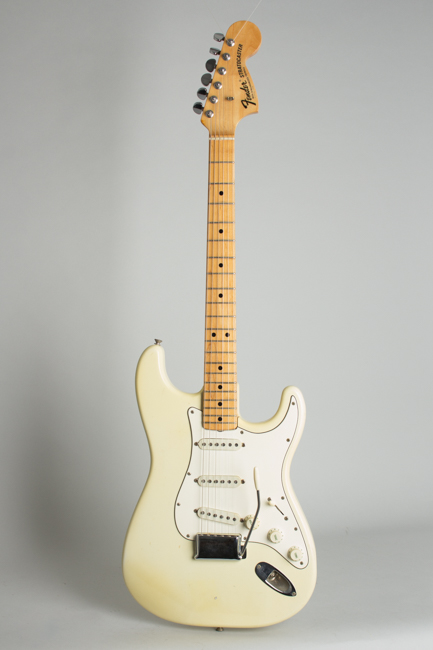 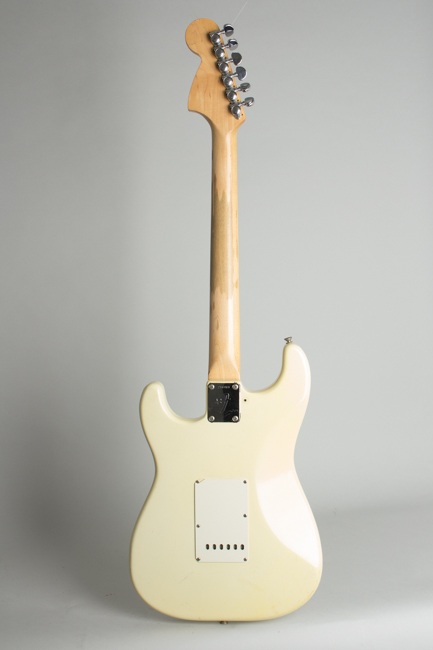 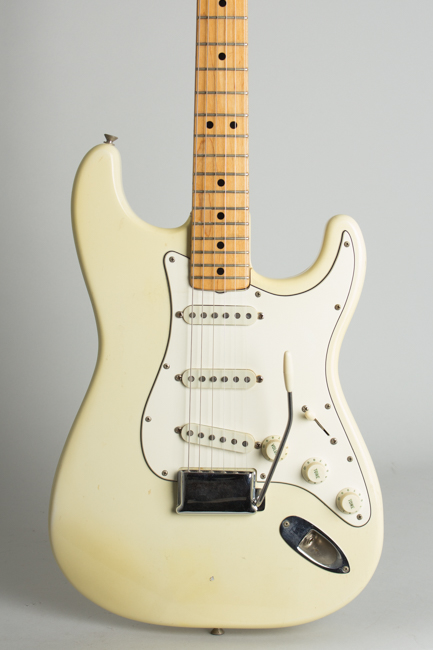 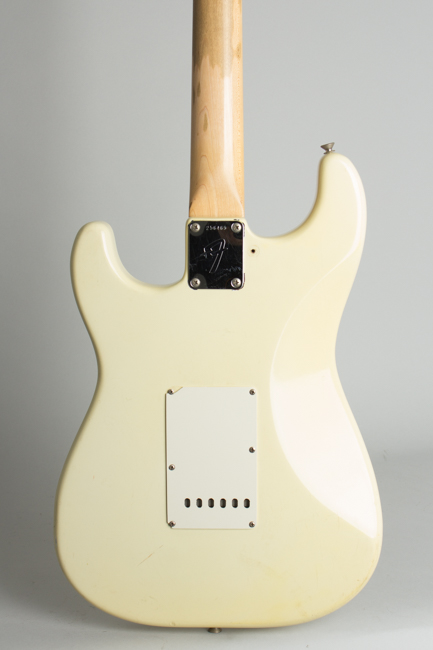 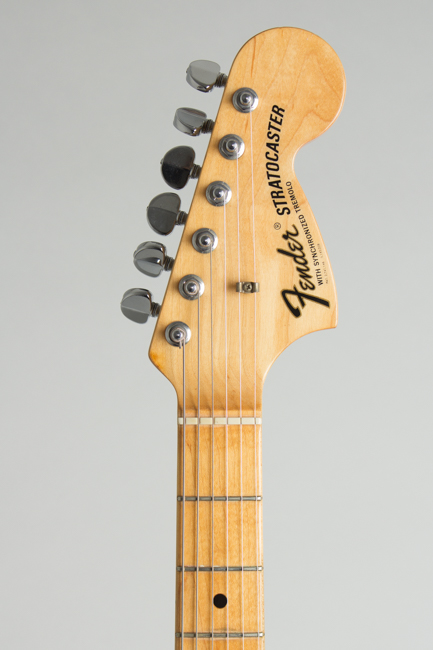 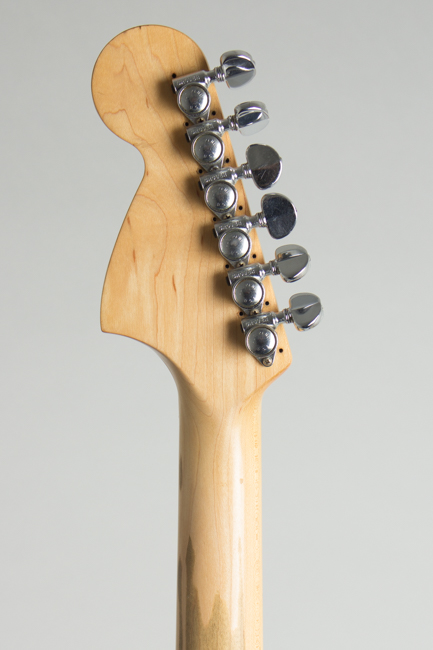 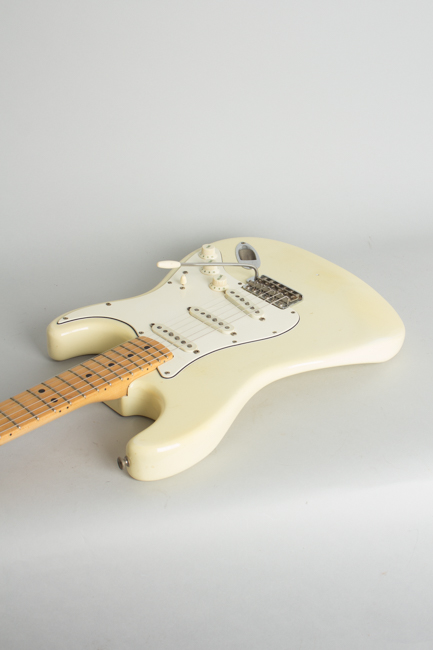 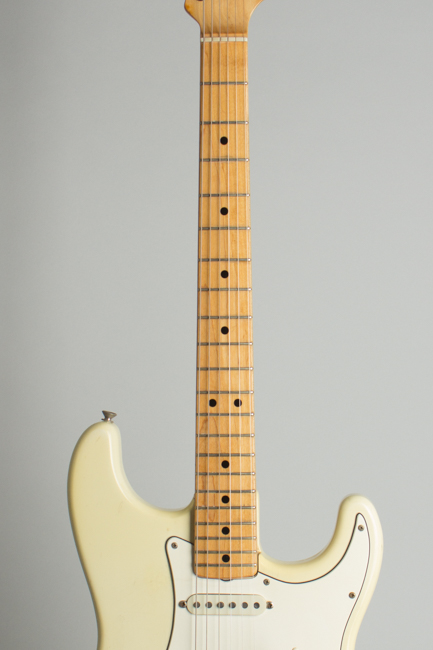 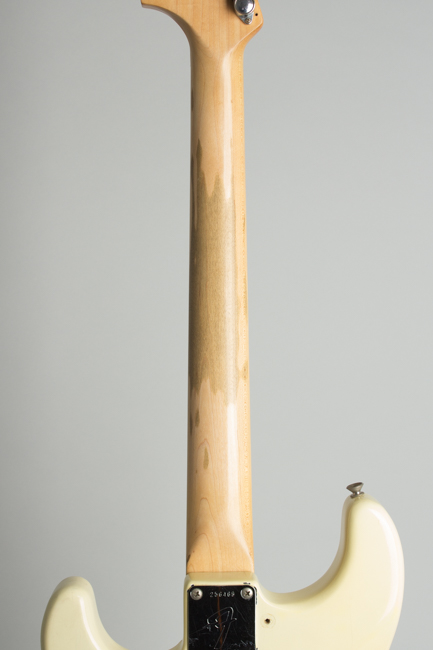 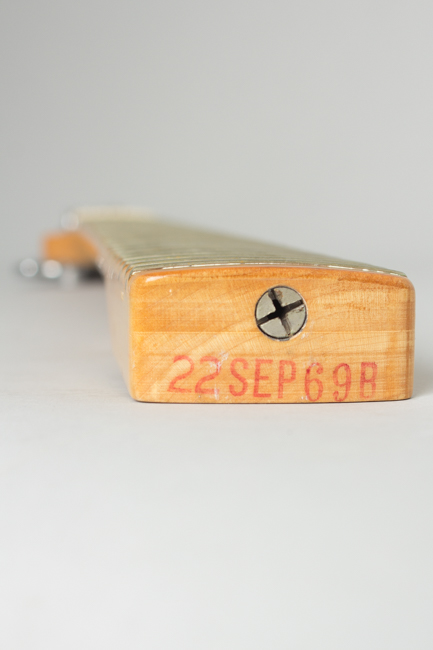 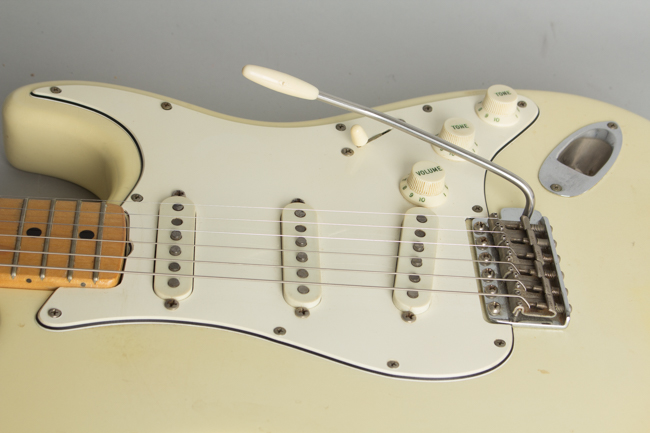 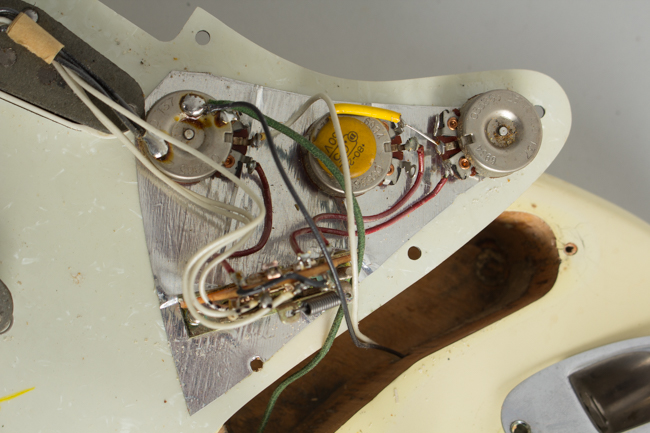 There are a million guitar stories out there; this Stratocaster has a weird one but it is not the first like it we have seen. It was sold to a teenage Jimi Hendrix fan in the northeast around late 1969 or '70 (he recalls the earlier date) out of a local music shop as brand new and all original, a custom color Olympic White Strat straight from Fullerton. It WAS a brand new Stratocaster, BUT the body had already been refinished from sunburst to a gleaming white hue in a decidedly more local setting. While unusual, it was not unheard of at the time for local shops to alter product to make a sale.

The finish is lacquer, cleanly applied and somewhat thinner than what Fender was starting to use at the time. The color is good, and without a heavy clear lacquer overcoat has remained true white instead of yellowing as many have. There is a bit of light "orange peel" effect on some surfaces, indicating the buffing process was not as thorough as it might have been. This work was probably done in a local car shop; they had the proper paints and spray equipment and this was the source of most older refins not "home brew" at the time! After spraying they had to re-route the pickup, control cavities, neck pocket, trem pocket, and even the jack cup a bit as the lacquer was likely pooled in these areas enough to make re-assembly difficult. Some original sunburst can still be seen in a few spots, it is possible that it was not fully stripped before the white coat went on.

The rest of the guitar had remained as it arrived from Fullerton sometime in fall 1969, all hardware was left intact. A few years later that same young player took the typical '70s step of adding Grover Rotomatics to the guitar in place of the Fender "F" tuners. The guitar was neatly refretted by Boston luthier Jim Mouradian many years later. The original owner happily played it over several generations believing it was, as he had been told, an original Olympic White Stratocaster just like many played by Jimi.

Apart from the finish the guitar IS a typical "Hendrix era" Strat, showing the transitional features seen at this specific time, when the instruments were changing from the "Leo" style into the slicker '70s CBS look. Jimi Hendrix, the ultimate avatar of the Stratocaster, mostly played then-new models built at this time; that has given these guitars a special appeal in the ensuing years. While no longer truly Pre-CBS in feel, these end-of-the-'60s Strats still hold a strong fascination for many players, redolent of what many feel was a special time in music and cultural history.

The one-piece maple neck is dated September 1969, and that finish was not altered. It has the earliest type of Poly finish, not as thick as the later 1970s versions and with the decal under the poly overcoat on the large headstock. This neck feels more natural than the later 1970s "Thick Skin" Strats, with necks that feel like they were dipped in Polyester. The white plastic pickguard has a pearloid underside, an oddity again typical of this exact time period.

The majority of the internals have been altered; all pots are matching, dated to the 34th week of 1969. The grey-bobbin pickups are leaded with plastic-coated wire instead of the earlier cloth-covered variety, the original masking tape on the wires is still in place. The switch was changed to a 5-way some time back. Most solder joints remain original, except those related to the switch change and what was necessitated long before by the refinish.

This guitar plays very well and sounds great, with the classic Strat quack one would expect. Despite its checkered past it has survived the years better than some, even considering the early finish work and other indignities. At least it escaped getting enormous jumbo frets, humbucker routs, locking trems, and other pitfalls of the '70s and '80s. It is simply a cool Strat (if not all-original) that feels great with a killer (if partially rueful) story behind it.

This Stratocaster remains in fine playing condition; it has been well-loved and cared for since that fateful "original" purchase. There are some small dings and dents to the body finish -- one right in the middle of the top -- but no major loss. The back of the neck is worn down to the wood mostly around the middle area. The frets are in very good condition; the crown is a bit flatter than the original style and there are some small pulls visible in the maple fingerboard from the refret with some light finish touch up.

The Grover tuners are cleanly mounted but the holes were fairly well enlarged so it would need to be doweled up and re-drilled to re-mount original style tuners. For some reason there is an extra strap button hole on the back above the neckplate, an odd place for a strap button but it was tried! Two corners are cracked on the original backplate. The bridge saddles have some light corrosion but nothing that gets in the way of function. The trem works well and even the arm remains original. The original case is unfortunately long gone; it is housed in a later tweed re-issue HSC. Overall Excellent - Condition.
×