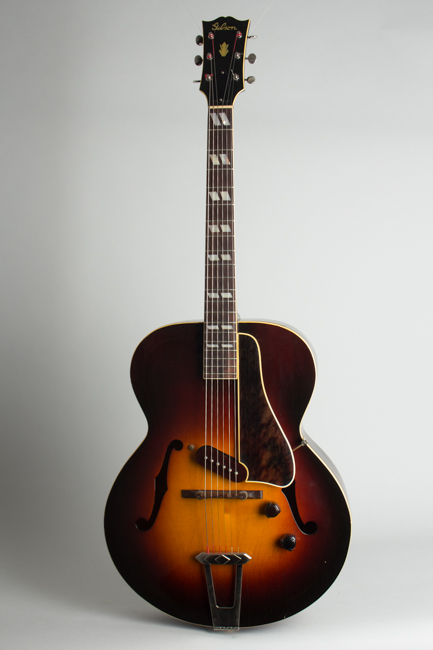 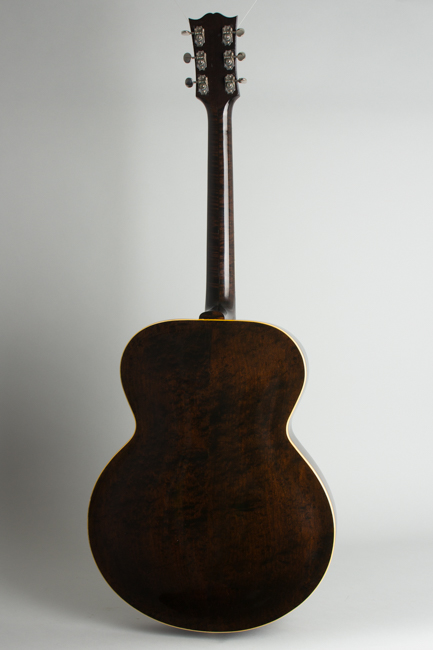 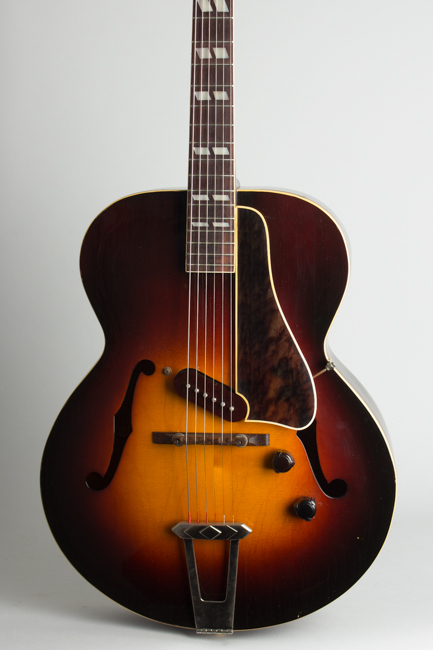 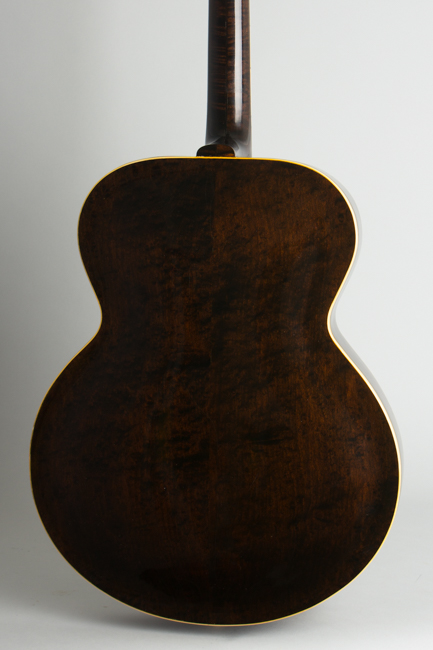 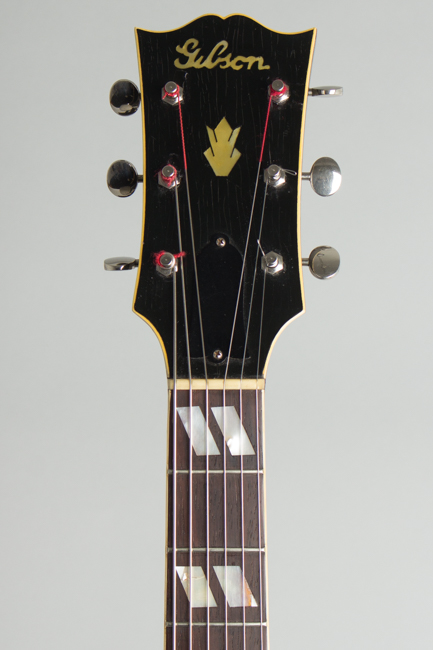 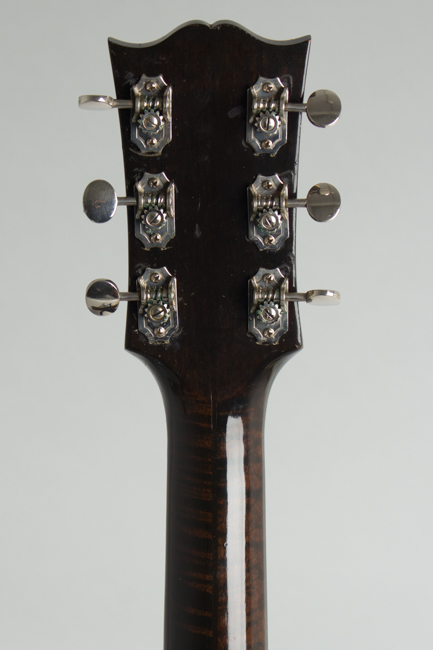 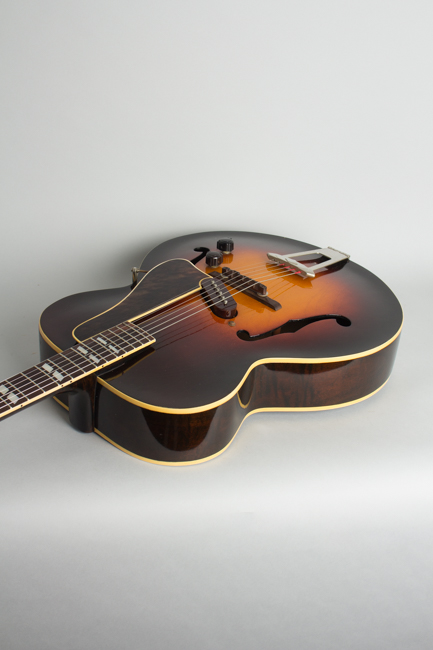 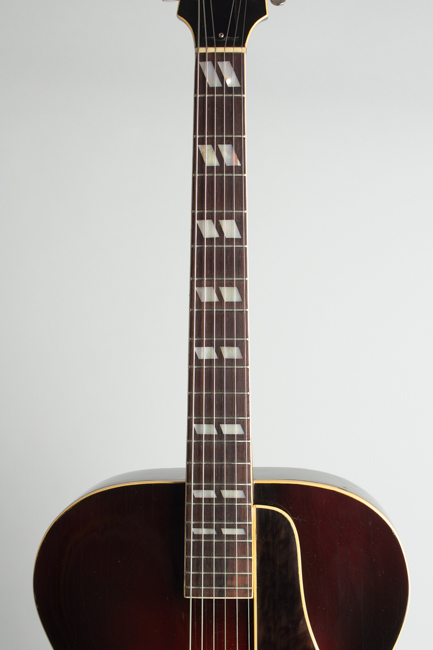 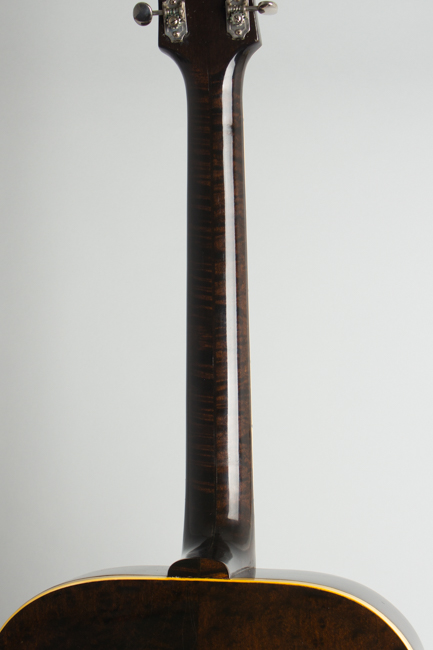 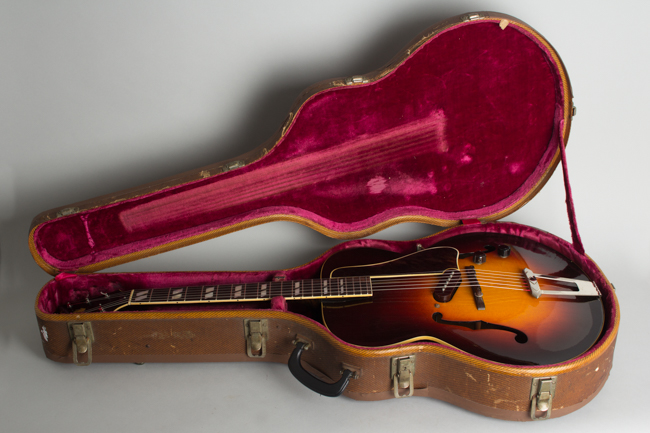 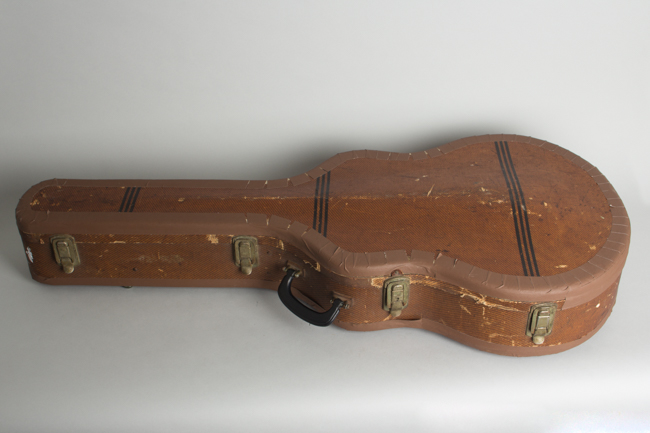 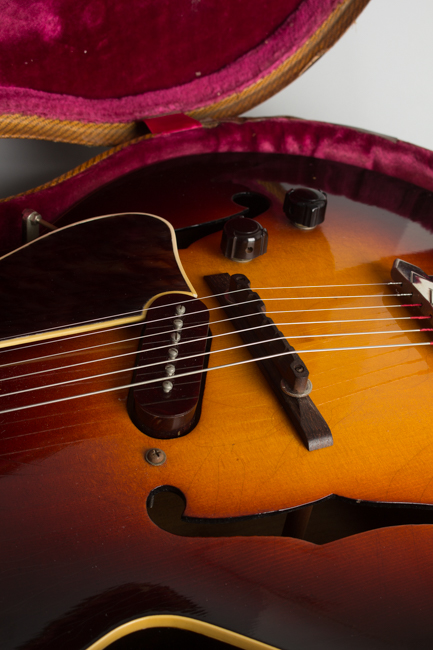 This lovely instrument is a Gibson ES-300 from 1940-41, the company's top of the line electric Spanish guitar at the time. In 1940 Gibson engineers began replacing the bar magnet pickup they had been using for the past 5 years with a flurry of new designs, one of which is featured on this instrument. Unfortunately that pickup was just then being played into immortality by Charlie Christian (whose name it has borne since) so in hindsight this move has seemed like an historical mistake. The pickups Gibson introduced in 1940-41 were more modern and efficient, but never caught on with players and none were brought back to market after WWII.

The initial ES-300 introduced in 1940 was a perhaps an over engineered solution to the initial reaction many players had to the electric guitar -- it sounded too different from the acoustic, with an unwelcome twanginess or woofiness. Of course, soon enough in the post-WWII era the world happily embraced the electric sound, but in 1939 it was still controversial and many players (and the bandleaders paying guitar players) felt it was too "far out" of the character of the instrument.

Gibson's first ES-300 was fitted with an enormous pickup with a very long coil diagonally spanning the entire face of the instrument under the strings. The idea was to pick up the notes in a comparative harmonic frequency range to where they sounded. Unfortunately this cumbersome idea looked and sounded odd to players used to the electric guitar, while failing to convert acoustic purists. The first ES-300 was replaced in a matter of months by this more conventional version, with a more practical shorter version of the same pickup mounted at an angle by the bridge giving a more concentrated and twangier tone. In this it oddly prefigures Leo Fender's Telecaster design!

The pickup itself ES-300 is still a unique unit, a rounded-end coil housed in a tortoise celluloid shell, with height adjustment screws at each end and individually adjustable pole pieces-an idea just poached from Epiphone. Interestingly enough in 1940 Epiphone built all their electrics with the single pickup in the bridge position, and in this case it looks like Gibson was imitating their closest competitor. The ES-300 pickup was only used on this Spanish model and contemporary high-end lap steels. It is an indirect ancestor of the familiar post-war P-90 used by Gibson for decades, but has quite different construction with its coil fully enclosed in Celluloid.

Apart from this signature pickup, the 1940 ES-300 is a fairly conventional Gibson arch top, most similar to the acoustic L-7. It is a classy and high-quality guitar, the finest dedicated electric of its day. A lovely Gibson sunburst finish highlights the carved spruce top; the figured maple back and sides are somewhat obscured by an overall dark shaded lacquer. The neck is shaded dark as well, and all edges are single bound in white Celluloid.

The 3-piece laminated maple neck has a bound rosewood fingerboard with split parallelogram inlay. The scale length is Gibson's longest at 25 1/2" giving the guitar an extra resonance factor. The elegant bound headstock carries a pearl script Gibson logo and the "crown" inlay that went on to grace many postwar Gibson classics. The tuners are early openback individual Klusons with metal buttons; the adjustable rosewood bridge, "diamond" tailpiece, radio style knobs and bound tortoise celluloid pickguard are typical Gibson appointments of the time.

The factory order number stamped on the lower back is 1406F-5 indicating this guitar was built in 1940, while the serial number suggests it was not shipped until mid-1941. This second ES-300 also had a sadly short shelf life of less than two years, discontinued after US entry into the war stopped electric guitar development in its tracks. While exact figures are hard to come by it appears only 200 or fewer were ever shipped.

This is an earlier pattern "second generation" ES-300, with a fully carved spruce top supported by soundposts running to the back (the pickup location interferes with the typical Gibson bracing pattern). The combination of this structure with the fat-sounding single coil pickup mounted by the bridge gives the guitar a very unique tone, fiercer than many but more feedback resistant than most similar early hollowbody guitars. Even 80 years later there has never been another Gibson electric like this one, a full-body archtop with a raunchy soul!

This guitar remains in very fine condition, albeit with some restoration mostly due to the propensity of Celluloid Nitrate to deteriorate over time. The original pickup rests in the case pocket, a victim of severe nitrate gassing from its tortoise-colored shell. It has been replaced with a splendid exact reproduction made by Jason Lollar, who does this sort of thing better than anyone on earth. This unit both sounds and looks just as it should, a testament to this coil-and-wire wizard's fanatical dedication to doing things exactly right. The instrument is also fitted with an exact reproduction pickguard, made using the original binding -- again the original is included but also suffering from minor Celluloid disintegration and not useable.

Apart from these substitutions, the guitar is very clean and nicely original. The original tuners have been restored and there are some small scars to the headstock as a result, and some checking on the face. Apart from this, the body shows some small wear marks, dings, and dents here and there, but overall you'd be hard pressed to find many Gibsons of this period in cleaner shape. The original lacquer still shines with a showroom patina, just like it did in 1941!

The instrument has been very neatly refretted with the correct style wire and plays extremely well. The sound is brighter and hotter than many pre-war electrics; the pickup has some of the character of its P-90 descendants and the overall effect is not unlike an arch-top Les Paul Junior! This rare ES-300 is a lovely instrument and a fascinating piece of early Gibson electric guitar history, housed in a well-worn (the edges have been taped) but still solidly preserved tweed OHSC. Excellent + Condition.
×