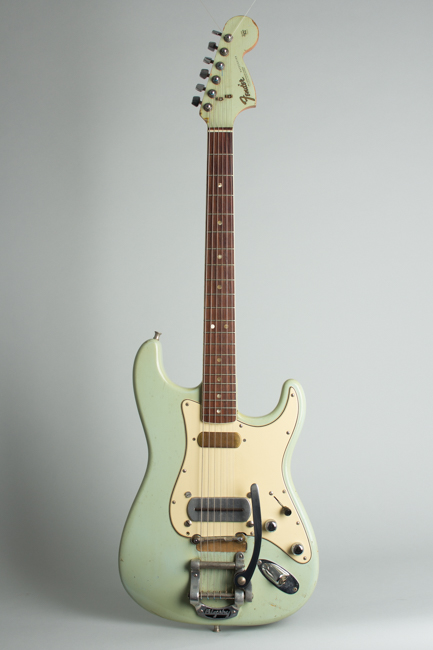 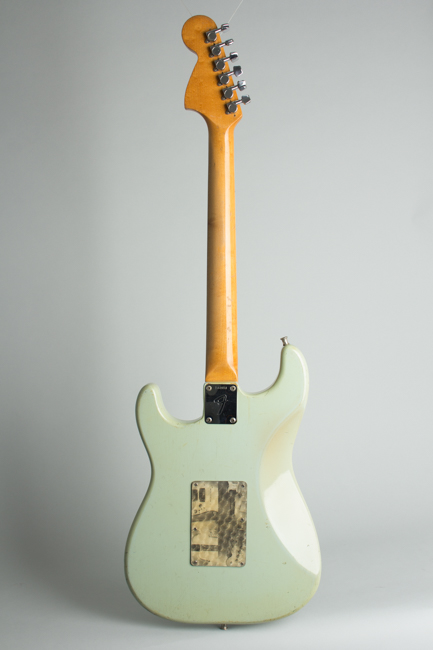 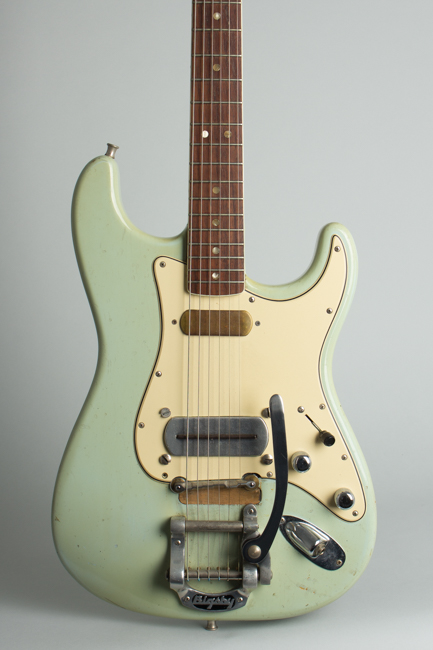 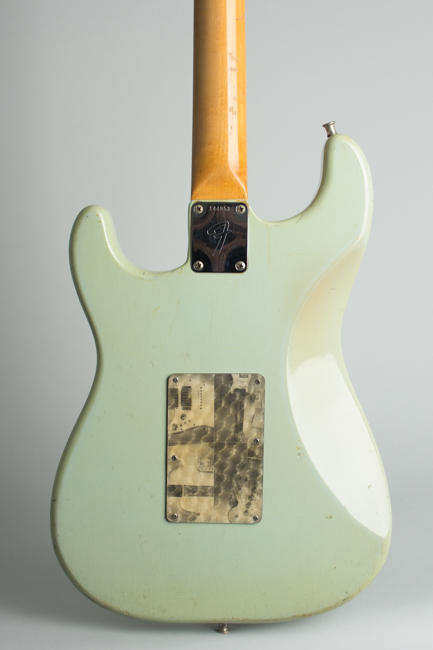 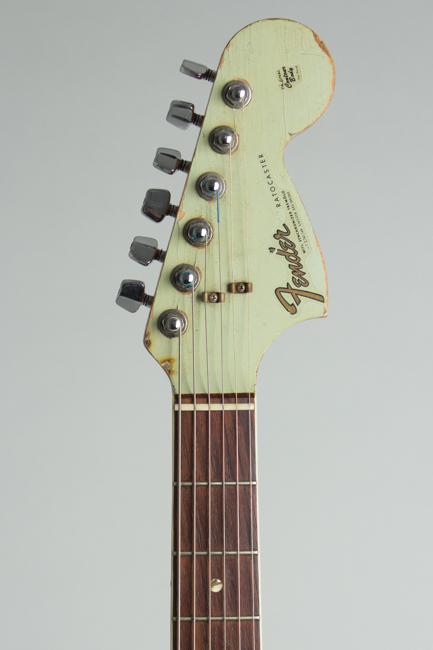 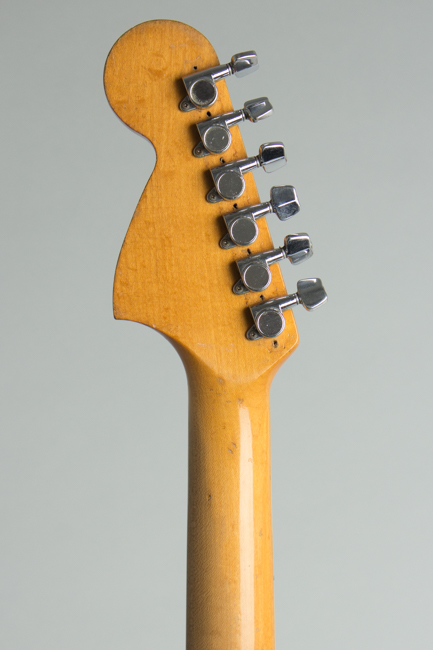 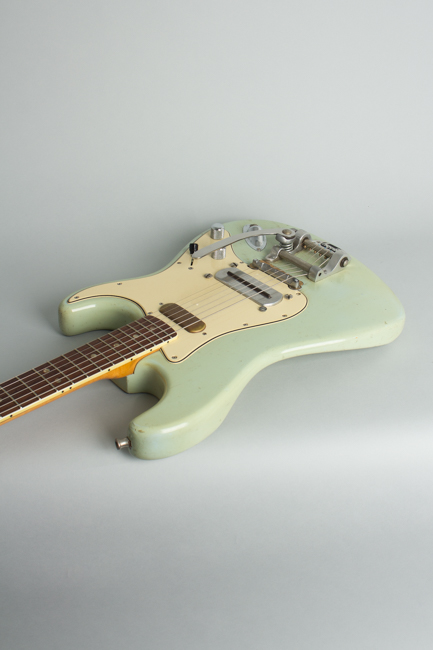 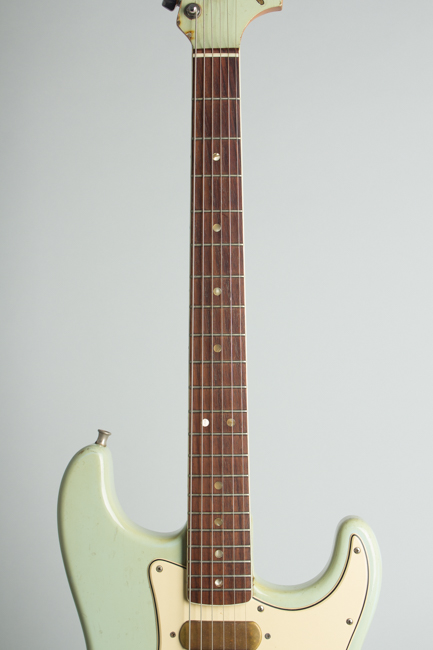 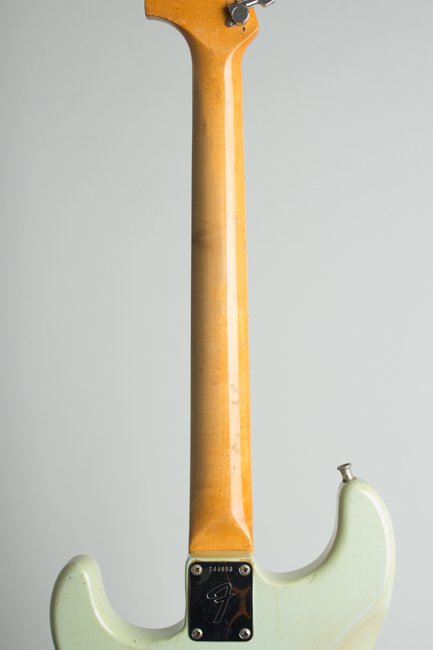 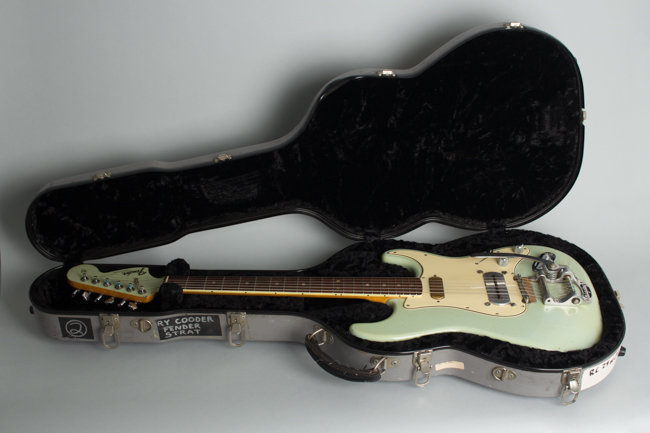 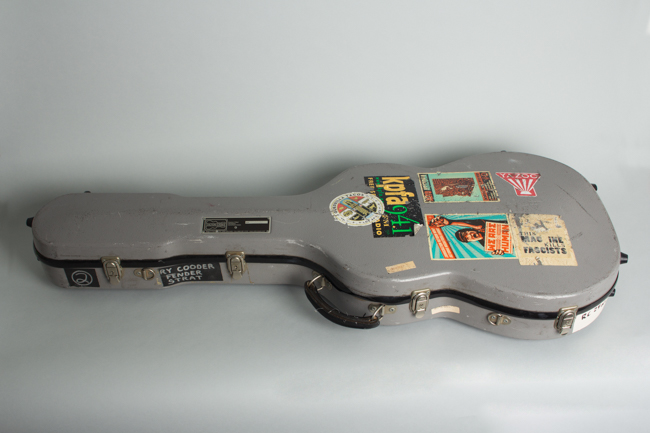 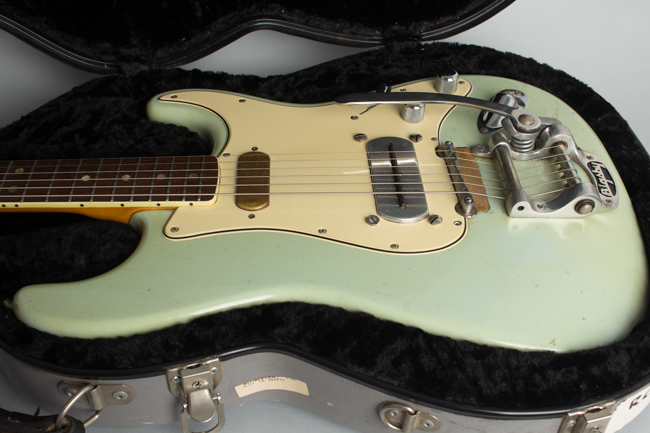 "Coodercaster" has become an entire sub-genre of Stratocasters over the last couple of decades, meaning a guitar built or modified to emulate the eccentricities of Ry Cooder's personal instruments. This is THE original Coodercaster, the guitar that was the first Strat the man himself owned, modified, and subsequently played for decades. Here in Ry's own words is his history with the instrument:

"Captain Beefheart got a record deal with Buddha Records and a Fender endorsement; modern youth target marketing had just been invented, you see. I was told, you go down to the Fender factory in Fullerton, and speak to so-and-so, and he'll set you up. I saw the production machines and met some workers, and then the fellow took me in a show room where they had their new things and prototypes. The guy pulled this baby blue Stratocaster off the shelf and said, 'here'. I drove home and sat there trying to figure what it might be good for, having never owned an electric solid body guitar.

"Soon after, I realized Beefheart and I werent going to succeed as co-workers, and went in to the record company and said so. The head of A&R, Bob Krasnow, was lying on the couch in his office and he waived his arms at me and shouted, 'You'll never work in Los Angeles again! And give me back that guitar!' I left the office and the job, such as it was, but I kept the instrument. The next thing was, I got invited to go to London and stand idly by while the Rolling Stones messed around in the studio with Jack Nitzsche, who was a friend of mine from session work. I took the Strat with me, and one evening, the ONE evening, I actually played it. The tape machine was running, if you're interested. The rest is a kind of history we needn't go back into here.

"Soon after, I stumbled into a record deal of my own at Warner Bros, and started up making my own personal records. The Blue Strat was, at that time, still my only electric. I used it on all the early albums. Since I used mostly open tunings, I had a repair guy take out the wang bar springs and put a wood block in there to hold down the intonation every time I changed tunings. Now, years later, I wouldn't have done that, but what did I know.

"Then I started experimenting with electronics, trying for a thicker sound. P90s came and went. I had the bright idea to install an Oahu lap steel bridge pick up. It was the thing to do to help the bottle neck sound relax and it stopped the headaches.

"That's the short story. I still think the neck is one of the best I've ever played, and the Bigsby trailer brake really makes a sweet combination. That's an original Bigsby PU in there, and yes it's somewhat microphonic like early Bigsbys are sometimes, and it takes a little getting used to, like when you put that '53 Cad motor in the Model A, but you can learn to handle it. Or try some idea of your own."

That "short story" only begins to describe the mojo of this guitar. This was the only electric Ry Cooder used for the earlier part of his career, heard on many recordings and seen live extensively for many years.

Even before it was handed to Ry, this was a special guitar. He received it in 1967 from the Fender sales showroom, where it may have languished for a time beforehand. In the spring of 1966 CBS was tweaking the specs of the Fender line and made a VERY few custom color Stratocaster and Precision Bass production samples with bound fingerboards and matching headstocks, features never used on production models. This guitar's tuners were originally Klusons, suggesting the earlier dating. This may well be the ONLY baby blue Strat of its type ever made, and one of a handful of similar samples to have escaped Fullerton in the 1960s.

This Strat has been a test-bed for Ry's sonic experiments for decades and been modified innumerable times. In its current state, it is set up with an original Bigsby 8-string steel pickup at the bridge and a c. 1959 Guyatone pickup at the neck. These are wired to a 4-way switch and two Tele-style knobs. The original bridge and trem are replaced with a top-mounted Bigsby and solid Bigsby aluminum bridge saddle. The jack cup is reversed, a brilliant mod that works great. The tuners are later, probably Gotoh-made Rotomatic style, and the strap buttons are older Straploks.

After decades of playing, touring, and recording one would expect this guitar to show a modicum of wear, and it does. It has also obviously been well-cared for, and the somewhat fragile original Fender Custom Color lacquer actually remains in surprisingly good shape, evenly faded and checked but not heavily "greened" and with no alterations. There are numerous small dings and dents but only a few larger worn spots. The headstock decal is missing a few minimal spots and reads "ratocaster"; we don't know if that is an accidental or deliberate modification! There are a couple of small "classic" cigarette burns by the low E tuner.

We assume the area under the pickguard is pretty thoroughly routed out. The original bridge cavity is filled with an unfinished piece of wood, and the back trem cover has a laminated plastic plate featuring images of this guitar in a previous state. We have not cleaned, opened up, or re-set up this guitar; Ry's strings are still on it, tuned to an open G as it arrived and working perfectly.

This is both a fantastic piece of 6-string history and a totally unique-sounding instrument, a testament to the endless search of one singular player for the perfect-sounding guitar. It is housed in a sticker-emblazoned shaped road case that has been many places with it. Many folks make what they call a "Coodercaster" these days; this is the one original from which all others have sprung. Very Good + Condition.
×