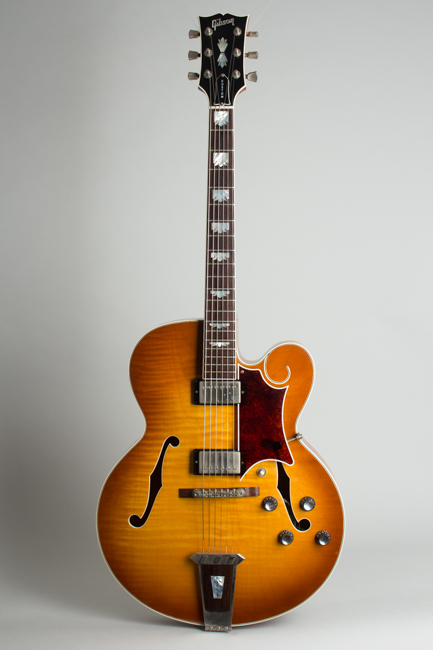 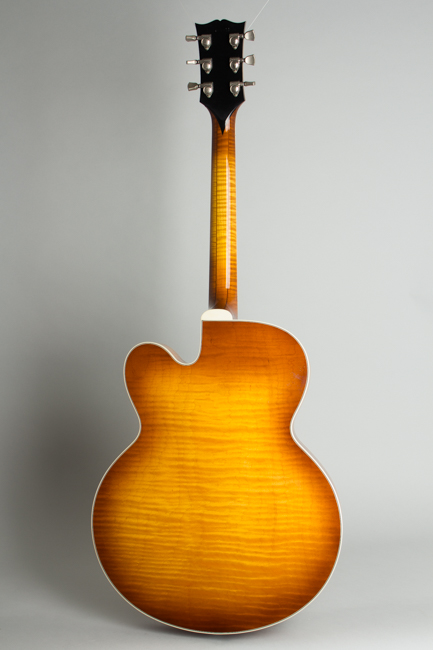 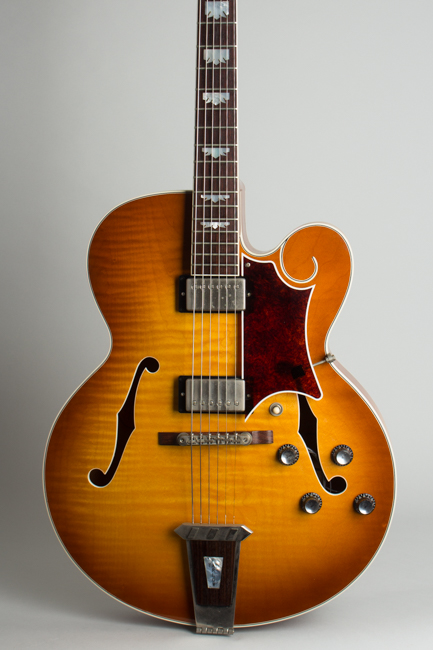 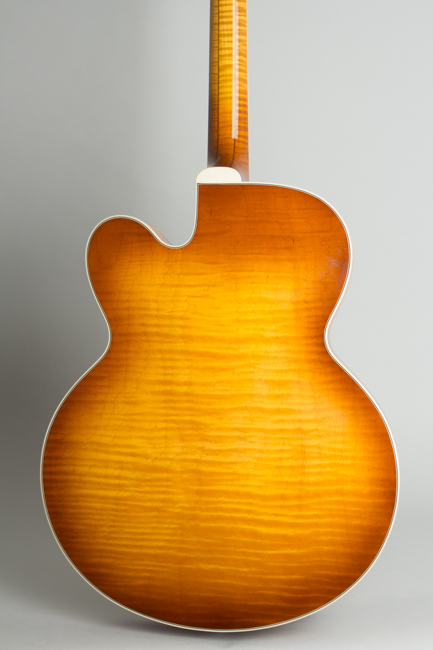 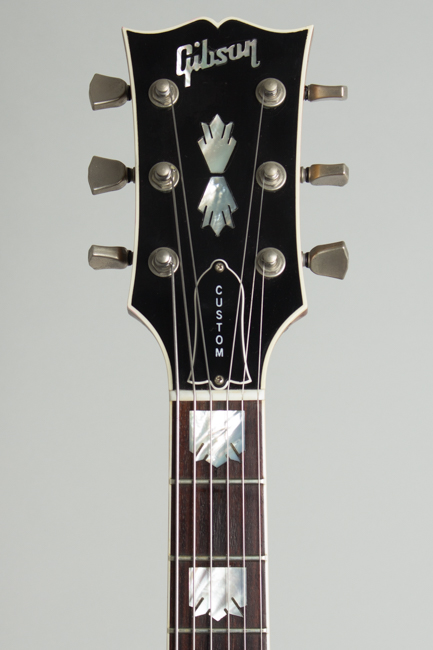 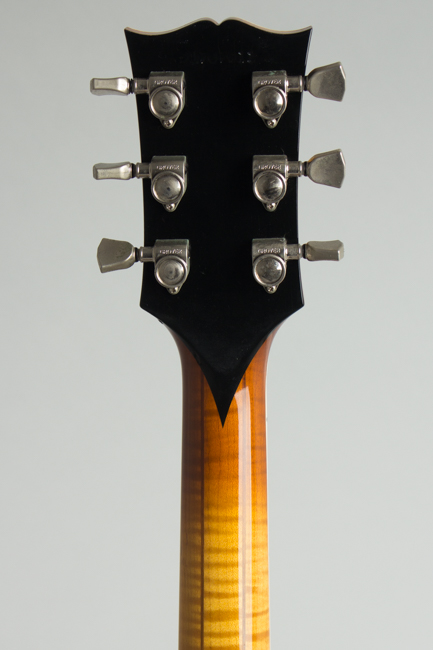 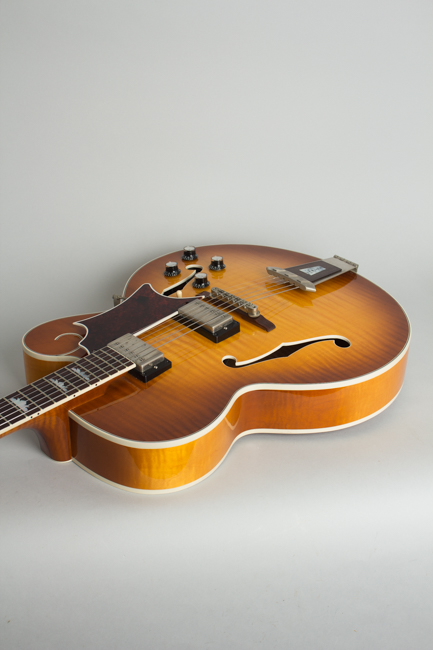 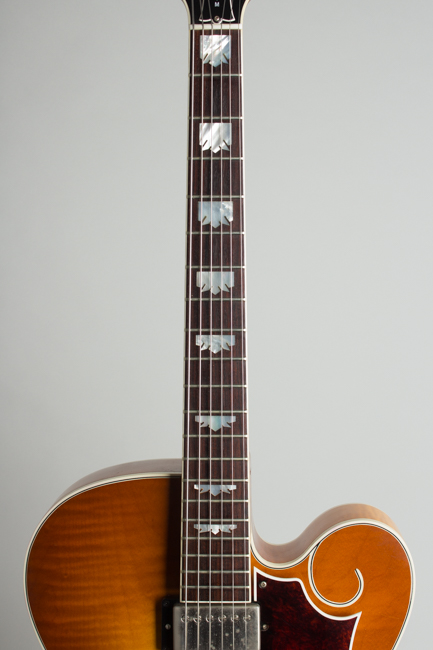 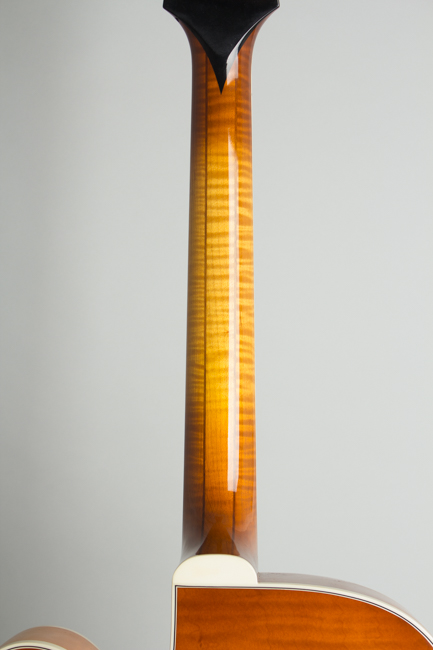 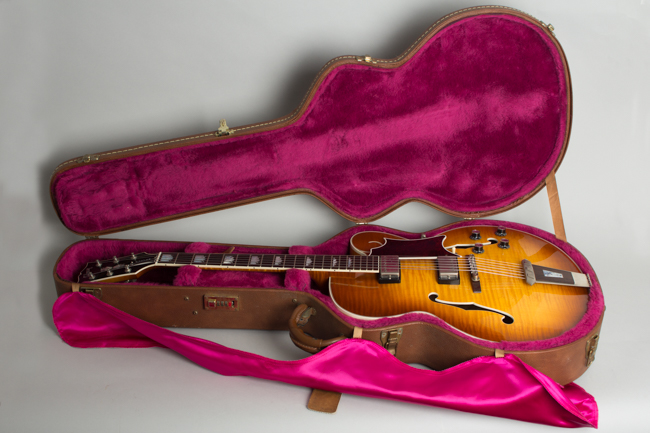 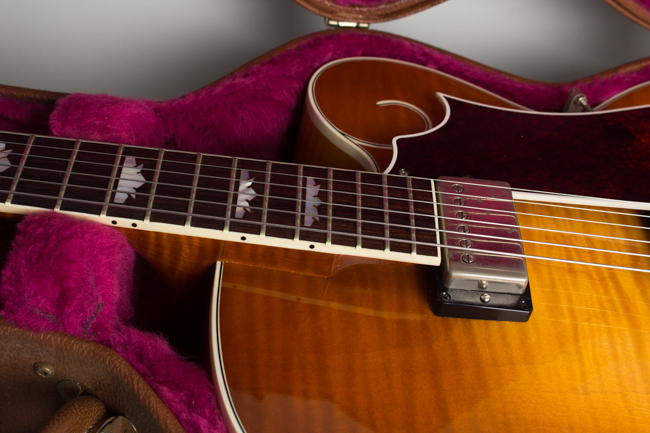 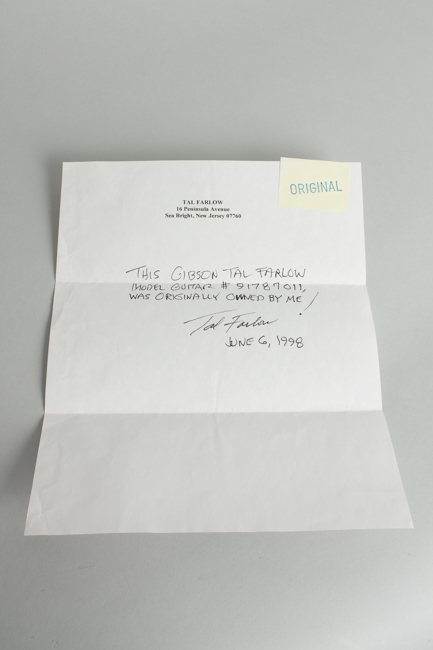 The Gibson Tal Farlow model is one of the company's classiest artist models, but also one of the less well-known. The model is a full-body 17" archtop that primarily appeals to players of the classic jazz bent, and indeed has been regarded from its inception as one of the finest instruments extant for this style of play. While for much of his active career Farlow played his original Gibson prototype, later in life Farlow did play the company's newer re-issues of his signature model. This particular guitar has a stellar provenance; it was originally owned by Tal himself and gifted by him to the filmmaker who produced the definitive documentary of Tal's life and career.

A letter of provenance is included, hand written and signed by Tal himself stating:

Sadly Farlow passed away just over a month later, on July 25 1998. He would have possessed this guitar for only a year or so, as its date-coded Gibson serial number indicates it was built in June of 1997. While we can't verify how much Tal actually played it during that time, he was the original owner. It has since been played occasionally and well-cared for, but remains unaltered as passed on from the artist personally (except for newer strings!).

Anyone interested in the art of Jazz guitar should be familiar with Tal Farlow, one of the undisputed masters and most original voices in the genre. Farlow started playing later than most, picking up the guitar at 22 years old with no formal training. His major inspiration was Charlie Christian, typical of anyone playing guitar at the time. After joining the Red Norvo trio in 1950 (alongside Charlie Mingus), Farlow's distinctive guitar caught the ears of listeners and fellow musicians alike. As a leader he subsequently recorded a series of classic 1950s LPs mostly for Norgran and Verve that remain essential listening. He left the music business behind in 1958, but continued to play and teach privately until reviving a professional career in the 1980s. His artistry remained undiminished and his later recordings are as brilliant as the early work that established his reputation.

At the end of the 1950s Gibson offered to create a signature guitar for him, alongside Barney Kessell and Johnny Smith. The Tal Farlow model was an upscale instrument based on the early 1950s ES-350 he had been using with mostly cosmetic upgrades. It was first issued in 1962 but as Farlow himself was out of the business was not a big seller, with only 215 sold before it was discontinued in 1967. The model has subsequently been considered a classic and the subject of occasional Gibson re-issues in the decades since.

This Tal Farlow from 1997 is a beautifully made re-creation quite faithful in most respects to the original. The 17" body is laminated flame maple, as is the long-scale 3-piece neck. Trademarks of the Farlow are an inlaid scroll on the cutaway bout, double crown headstock inlay, "upside down" J-200 fingerboard inlays, the unique pickguard, and the tailpiece with a pearl-in-wood inset block reading "Tal Farlow Model".

The electronics are two humbucking pickups with the standard Gibson wiring, the switch mounted near the bridge being the only unusual detail. All hardware is nickel-plated, and the finish overall is a lovely subtle shaded brown lacquer. This guitar has a round-backed neck profile which is very comfortable, neither as flat-feeling as the original 1962 models nor overly narrow like the final '65-'67 examples.

The only oddity we note on this instrument is the treble pickup is mounted a bit farther up from the bridge than most Farlow models; whether this was some specific request from the artist or Gibson whim is unknown. It does give the guitar a very slightly different response in the high frequencies, but this would not be noted by most players. We also can't say if this particular instrument was made specifically for Farlow or simply selected for him from existing models in stock as Gibson. We can state he was the original owner, and there are very few extant guitars that have that provenance.

This guitar is all original and very clean overall, showing only some very light handling wear. There is some minor tarnishing to the nickel plating on the pickups, tuners, bridge, and tailpiece but no alteration or repairs to the instrument. This is a superb example of this model, as might be expected of one originally sent by Gibson to the namesake endorsing artist. The frets show just some very minor wear, and it plays effortlessly with the expected lovely sound.

We can't guarantee this guitar will help you play like Tal Farlow, in fact we can pretty much guarantee that's up to you. Very few people have ever mastered playing like Tal. We can guarantee this guitar was in his hands, personally passed along by him in honor of his exceptional legacy as a player who contributed more than his share to the artistry of making music on the guitar.

The instrument is housed in what appears to be the correct original 1997-era Gibson case, which has a mark on the pad inside indicating a guitar with a differently shaped pickguard has also been stored in it. The original handwritten and signed letter of provenance from Tal Farlow himself is included, along with a DVD copy of "Talmage Farlow", the definitive study of Tal's life and legacy direct from the filmmaker who created it. Overall Excellent + Condition.
×