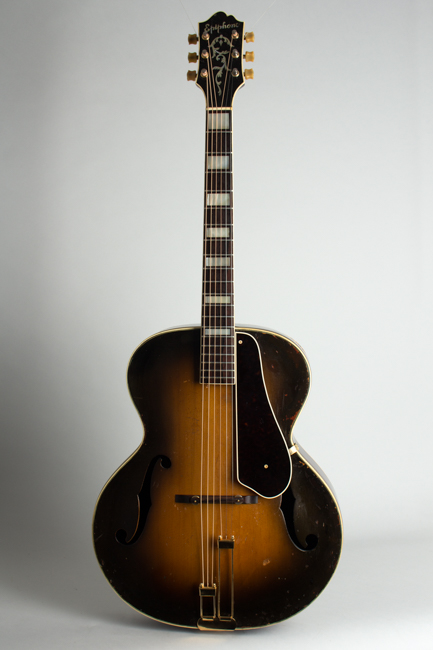 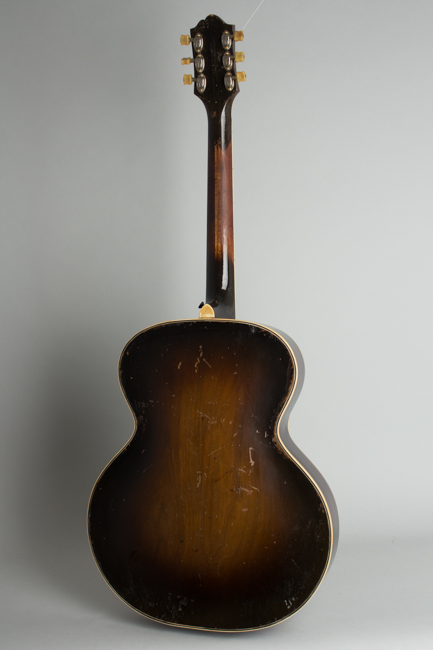 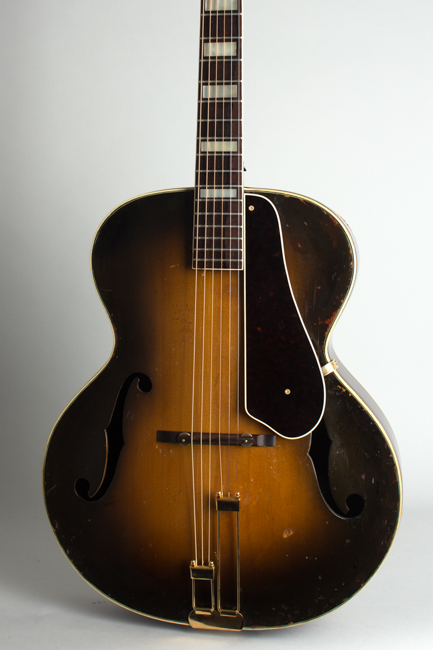 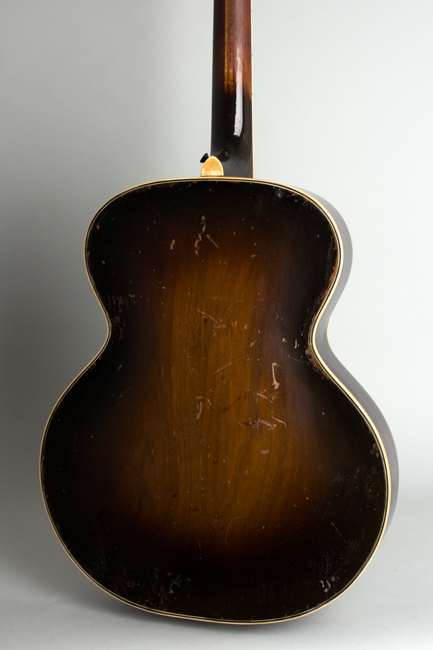 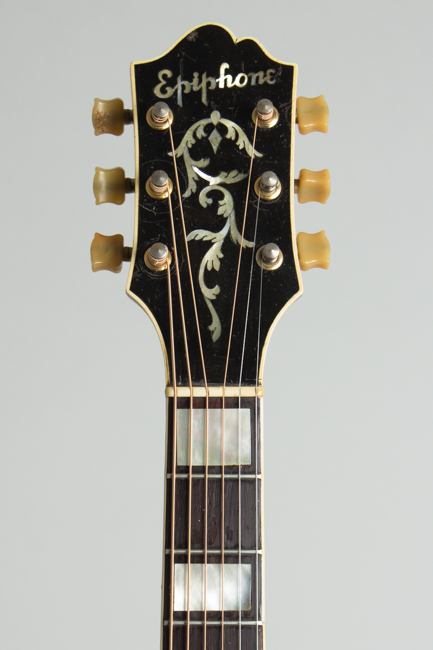 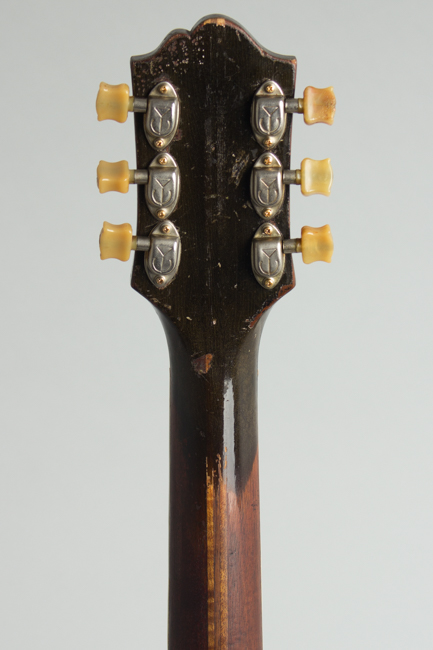 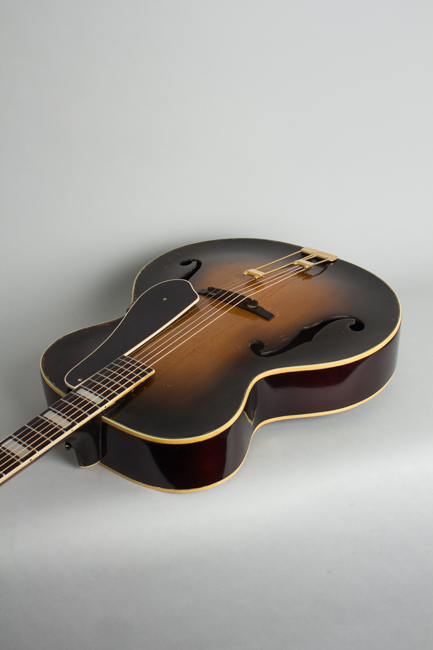 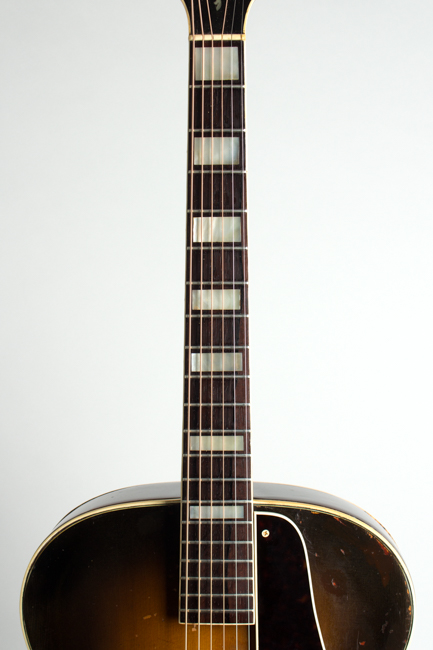 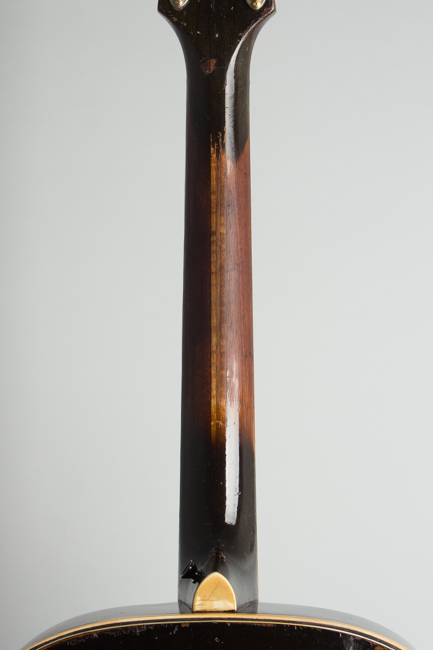 This Epiphone Broadway is a well-used but still great sounding arch top, a veteran of the swing era now just past its 80th birthday. The Broadway is a fully professional grade guitar, priced at $175 in the late 1930s. This model was third down in the company's extensive line, under the DeLuxe in the catalog but a full $100 less expensive. Visually it is relatively austere for a pro-grade archtop from this era, with a subtly elegant look but less overt flash than many. The Broadway was intended as a high-quality but comparatively affordable guitar and was often favored by period professional users on a more limited budget.

This particular Broadway is an interesting transitional instrument, made at the turn of 1939-40 just as the features of the model were changing. The body is made of walnut with a carved back; this would be one of the last of the walnut Broadways as the model went to a more typical maple construction. The headstock is the earlier mid-1930s style with the offset peak, but the neck is equipped with the newer "thrust rod" Epiphone had recently introduced.

The rosewood fingerboard is equipped with real pearl blocks and single-bound, while the body is triple-bound. The neck is fairly slim (an Epiphone selling point of the era) but a bit deeper than some earlier models with a profile halfway between a "C" and a "V". The tuners are the then brand new in-house "E" units that would be a feature of better Epiphones right up until the end. The tailpiece is the "Frequensator" with separate tines for the bass and treble strings.

Transitional larger-bodied walnut Broadways like this are fairly rare today, this is the first we have had in quite some time. We find this is a fairly unique sounding instrument with a lot of sonic possibilities. The tone is a bit warmer than many maple examples, without losing the cut and power Epiphones are famous for. Still a solid working guitar after all these years, a fine example of pre-war Epiphone craftsmanship and a neat piece of New York swing-era history.

This is a well-used guitar, with some general restoration but remaining in good playing condition. The finish shows general wear practically everywhere, most notably to the back of the neck which is worn down to the wood along the spine from the first to the ninth fret. The body finish had general checking and numerous scrapes, dings and dents, with some deeper scrapes mostly to the back. There are no visible cracks to the instrument except one small grain split off the front edge of the treble side F-hole.

The finish remains original with the exception of the sides which have been oversprayed and polished out, likely due to the binding having been replaced on the top and back edges. The back appears entirely re-done, while the top appears to have had only the outer layer replaced. Many Epiphones of this era show major binding deterioration, so at least this one will be free of that headache in the future! There is some disturbance to the finish on the top and back all along the edges from this work, with some topical touch-up but no wholesale overspray. Some of this finish work is a bit sloppy on close inspection but not intrusively so.

The neck binding has been reglued in spots but appears original; the guitar has been nicely refretted with period appropriate wire. The tailpiece and pickguard are correct style replacements, the adjustable bridge is original. The Epiphone "E" tuners are original (or at least period-correct) with many small shallow marks on the D string peg that look almost like something was teething on it. There are signs of a previous DeArmond pickup installation, and a strap button has been added to the heel. The instrument plays well with the big chunky sound New York Epiphones are famous for. It is housed in a well-fitted '70s HSC. Very Good + Condition.
×