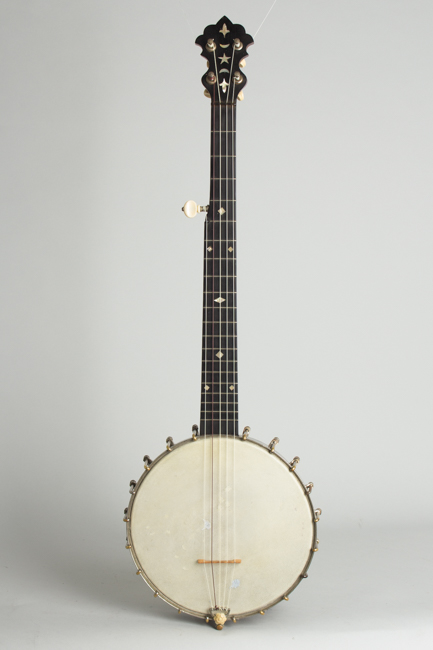 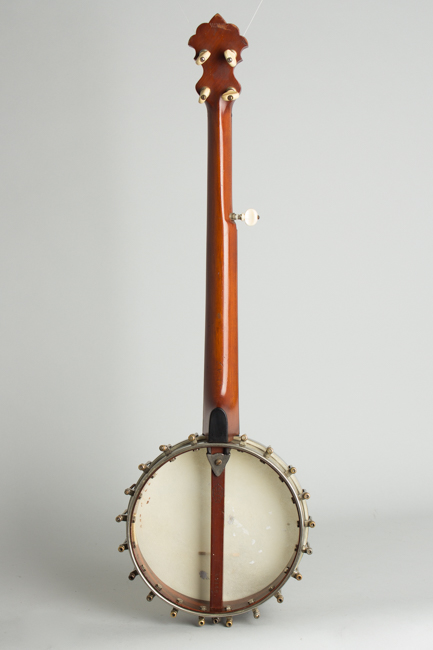 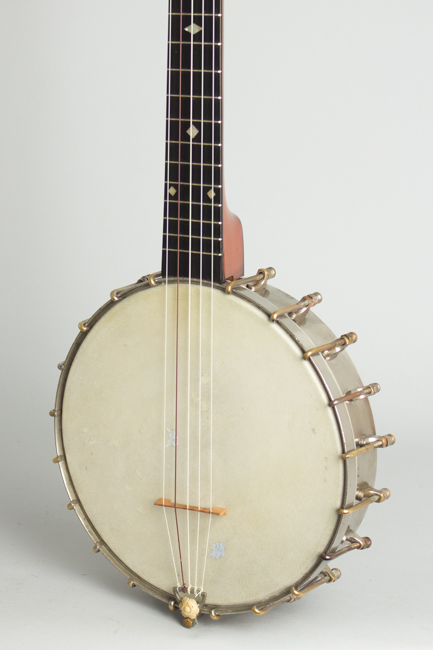 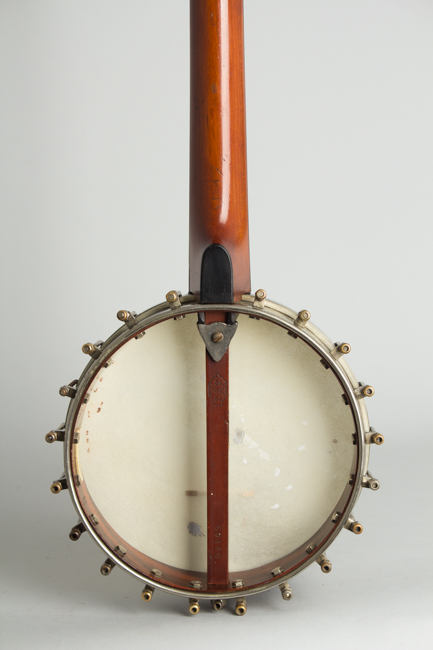 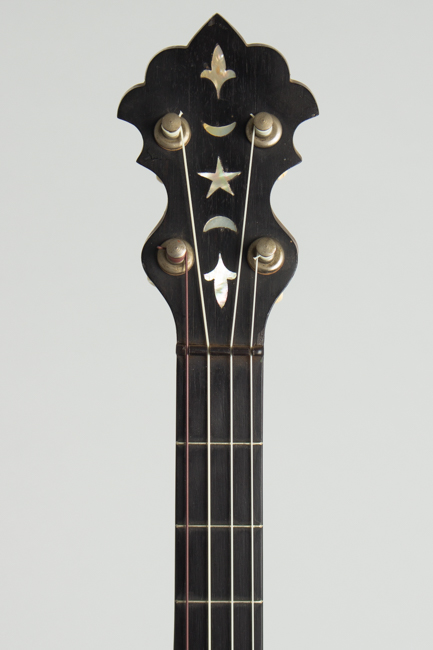 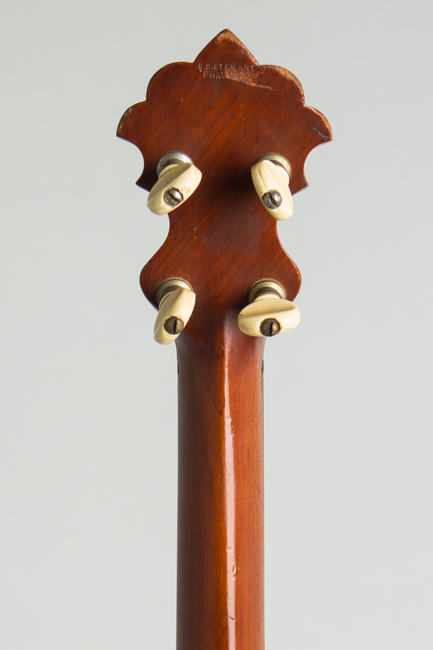 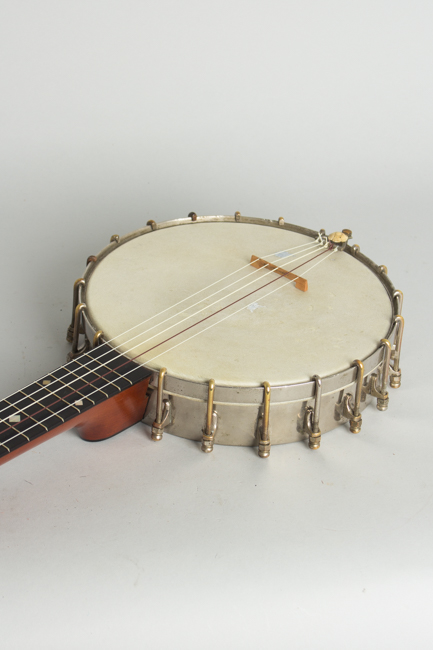 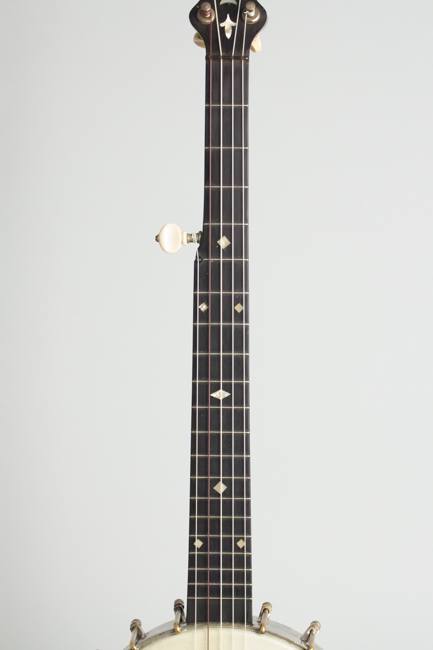 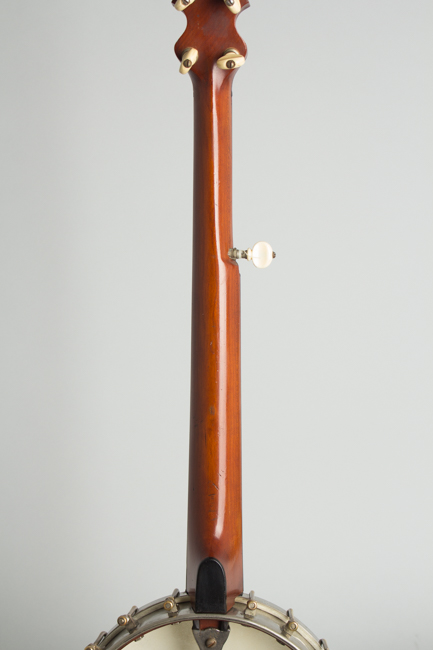 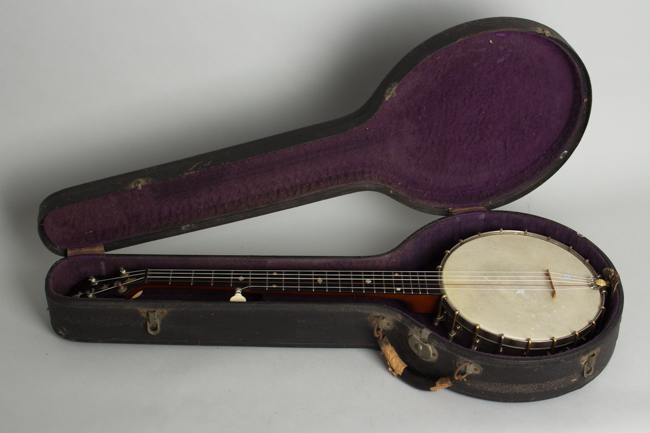 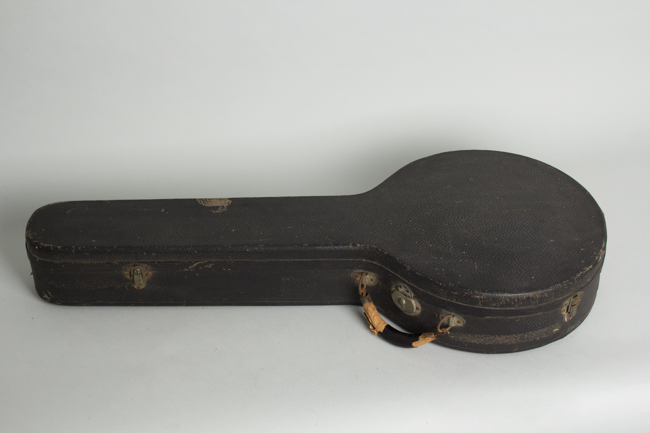 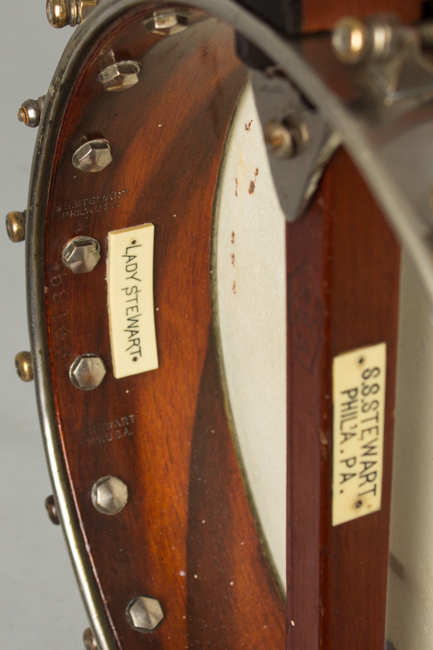 The charmingly named "Lady Stewart" is what was termed in the 19th century a "Ladies' Banjo", basically a scaled-down version of the standard 5-string with a short scale neck and smaller 9" head. This was largely the creation of Philadelphia's S.S. Stewart, and this one is a lovely example of his factory's work. The similar "American Princess" had a 10" rim, while this "lady" is a full inch smaller with a 9" rim and short 22 1/2" scale. Banjos were promoted heavily to ladies and young girls in this era, and Stewart was the leader in creating these smaller instruments for the supposedly more "delicate" female students!

These instruments could be tuned to the standard low "A" tuning of the time or a higher pitch to play melody parts in the banjo ensemble; they tune well to the higher modern tunings even with gut or nylon strings. The smaller sizes are quite a bit rarer than the standard size instruments as a general rule. Another promoted feature was what Stewart described as "Dress Protector" nuts on the rim, a bit shorter and rounder than standard.

This lovely little Stewart is a medium grade version of the "Lady Stewart" model. It features a cherry neck, ebony fingerboard with pearl diamond inlay, and a mixed diamond, moon, and star inlaid headstock. The inside of the spunover rim has a Celluloid "Lady Stewart" tacked badge. The dowel stick carries an inlaid Celluloid "S.S. Stewart, Phil'a PA" logo tag alongside an impressed "SSS" headstock-shaped logo. This is a lovely little banjo to play, and a delightful example of a medium-grade small-rim Stewart in relatively unmolested condition.

This is a very nice original small-rim banjo, far better preserved than most from this era. The finish and plating show some light wear with dings, dents, and scrapes overall. The most notable plating loss is on the brackets and shoes. The hardware appears original to the instrument except the 5th string peg which is mid-20th century; the nuts are not all exactly matched but all appear to be from the same period anyway. The celluloid button Champion friction tuners are a complete set and the original Stewart tailpiece retains the carved bone rose ornament that has often gone missing. There is one small ebony patch to the treble side fingerboard edge by the rim.

This is a fun to play and cool sounding banjo, now at least 110 years old. It was built for gut strings originally but due to the short neck could be adapted to lower tension steel if desired; many larger Stewarts with longer necks are poorly suited for steel stringing. It is currently set up with a skin head (solid with one small patch) older bridge and Nylgut Classical Banjo strings. Tuned to the modern standard G it has an archaic but enchanting tone, somewhat brighter and snappier than larger-rim banjos of this style. It is housed in a 1920s tenor banjo case that is functional if not an exact fit. Excellent - Condition.
×