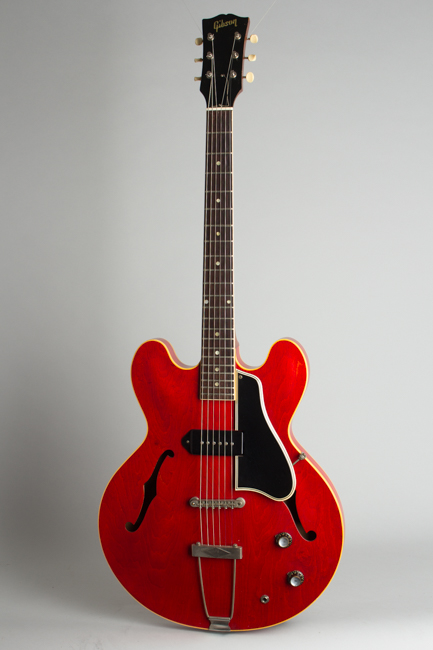 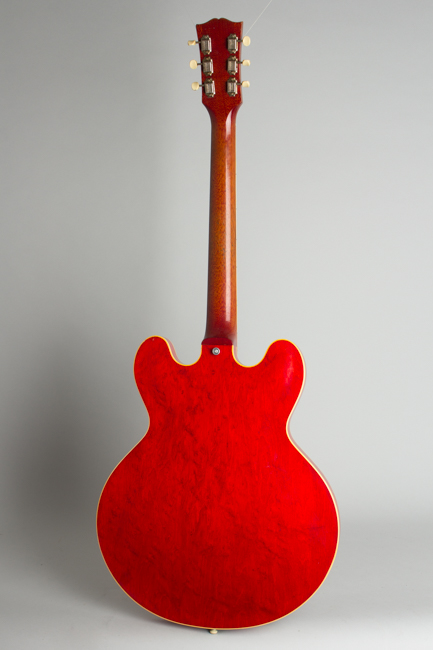 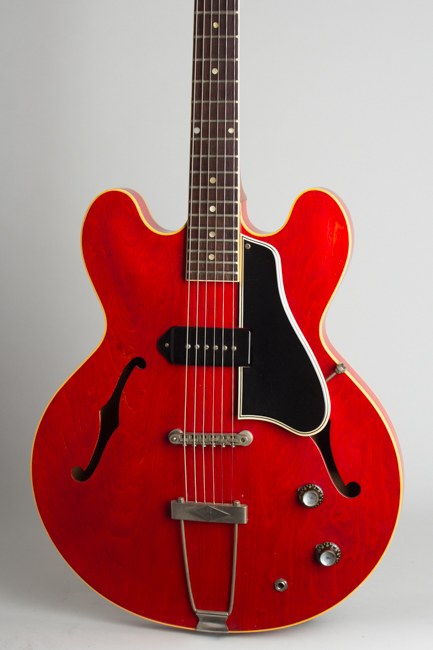 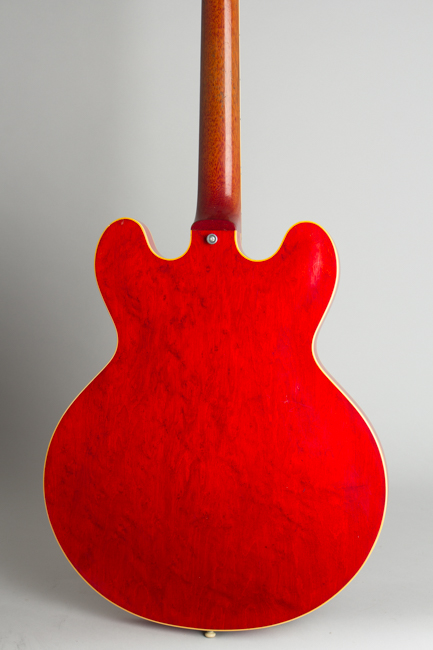 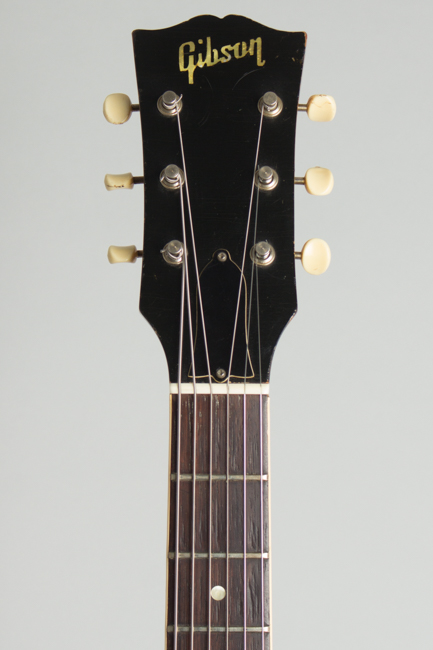 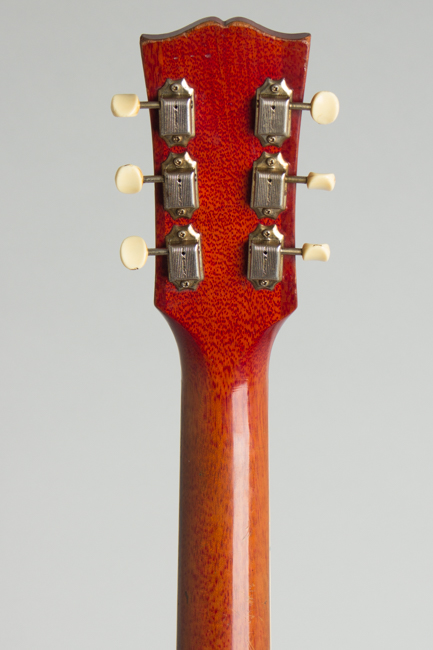 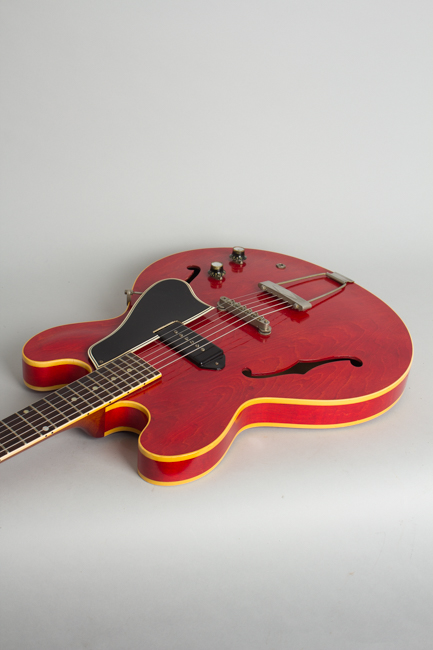 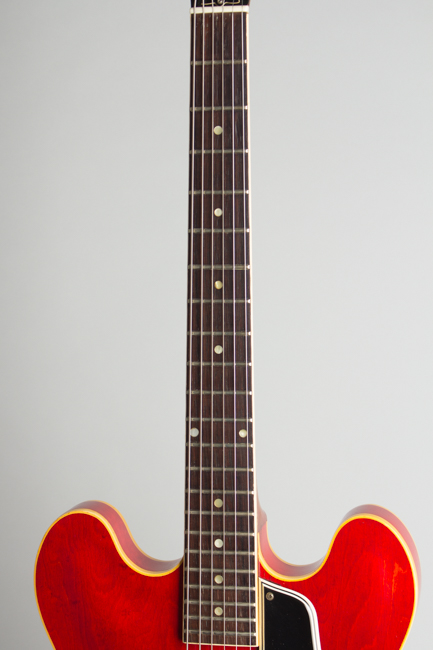 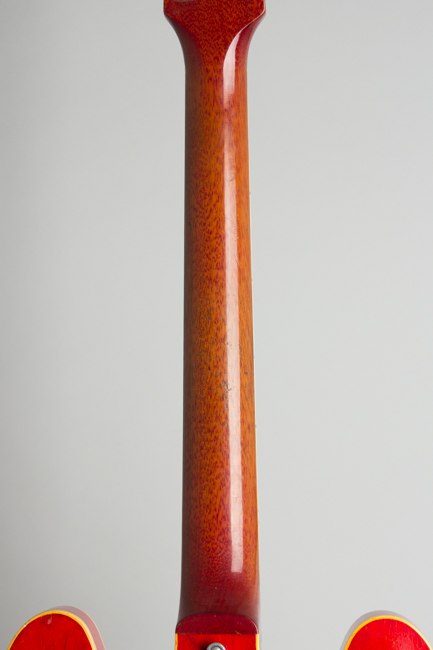 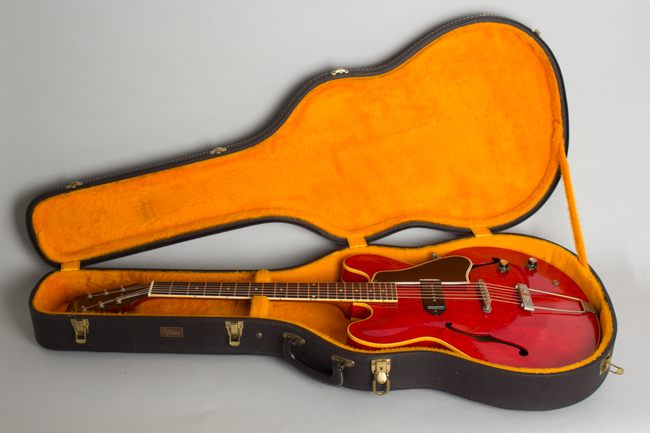 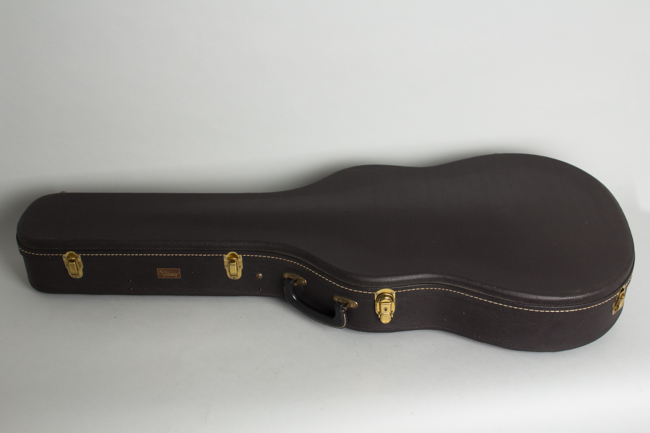 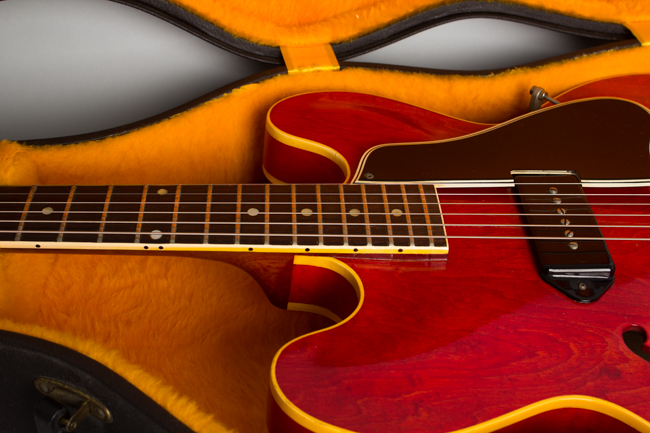 This is a superb original example of one of the first cherry-finish Gibson ES-330T models from 1960, the initial year of production. The ES-330T (with no "D") was the relatively short-lived single pickup version of the popular ES-330TD, one of Gibson's big successes in the early-mid 1960s. By comparison the cherry single-pickup ES-330 is a fairly rare guitar, with 582 total produced from 1960-'63. Only 37 cherry finish 330Ts are listed as having been shipped in 1960; this option replaced an even rarer natural version towards the end of that year. This one has a factory order number dating to later 1960; as these were applied early in construction, it is possible it was actually sold in 1961, one of 214 registered that year.

Regardless of when it was sent out into the world, this guitar was built in late 1960 and shows first-generation 330 features including the bound dot inlaid rosewood fingerboard, rounder "Mickey Mouse" cutaway horns on the body, and a black plastic P-90 pickup cover. The nickel-plated ABR-1 Tune-O-Matic bridge is the first "no-wire" pattern with nickel saddles. The single-bound body is fully hollow with a deep cherry finish and the neck joins at the 16th fret, in common with all early ES-330 variants.

The distinctive feature of the original ES-330T is the single P-90 pickup mounted right in the middle of the body. This center pickup placement was used by Gibson on just two midline models, the ES-225T and ES-330T as a sort of tonal compromise between the standard neck or bridge placement options. It gives the guitar a smooth midrange-rich tone, obviously not as versatile as the twin pickup ES-330TD, but with a distinctive sound all its own. When not pushed too hard through an overdriven amp it has an interesting acoustic-y character; we have found some players used to gigging with an amplified flat-top have been quite taken with this model.

This early 330TC is also simply a superbly easy-handling and great-playing guitar, super lightweight and comfortable in any context. The neck has the relatively flat profile seen on most 1960-61 Gibson guitars specific to this period. The nut on this particular guitar is slightly narrower than standard, closer to 1 5/8 in width than the usual 1960 1 11/16 spec. It's impossible to say if this was deliberate or not but it is definitely original as built. While not one of the most collected of vintage Gibsons, this is a very friendly instrument to play, and extremely well-preserved.

Overall this is a nicely original guitar showing just some typical light wear. It remains all original except for a period strap button added to the heel; this is the only alteration and almost ubiquitous on this model. All hardware is original and correct, with some light wear to the nickel plating. The finish shows light typical checking but is quite clean over most of the instrument, with some small dings and chips to the headstock edges and worn spots on the sides of the neck. The volume knob is a little banged-up along the rim. There are some small scuffs and dings but in general this is a very well cared for guitar.

The original frets are nicely preserved and there is some light wear to the lower positions of fingerboard. This is a very fine-playing and sounding guitar complete in a very clean original black/yellow lined Gibson HSC, which was brand new addition in 1960-61. As it is also correct for the period ES-335/45/55, this case has some substantial value in itself. Excellent Condition.
×