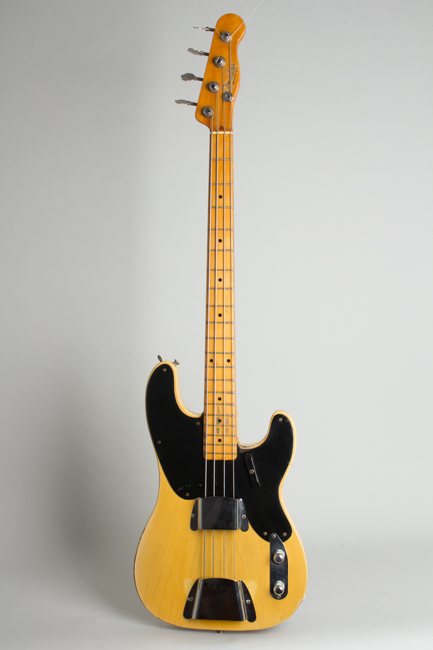 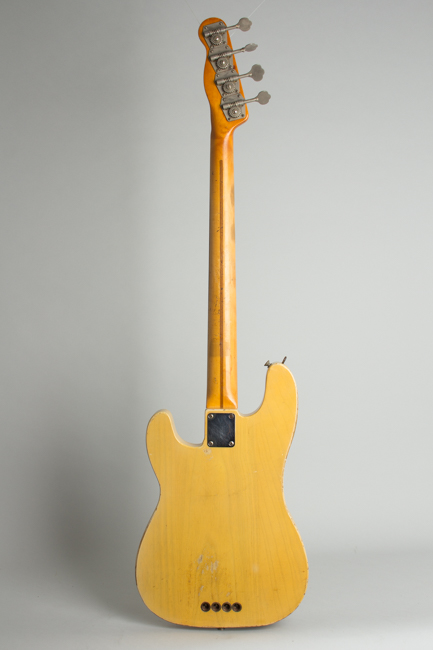 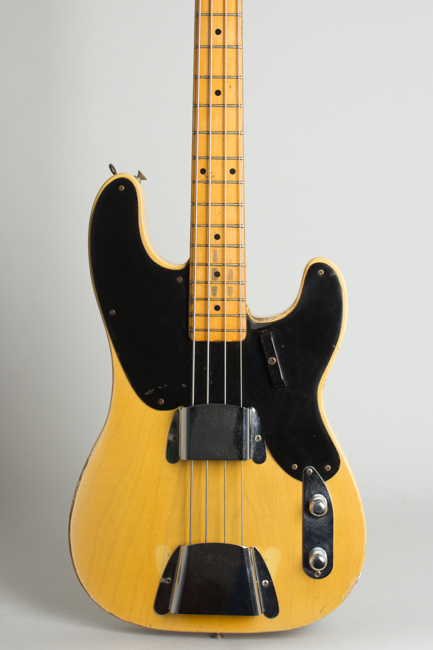 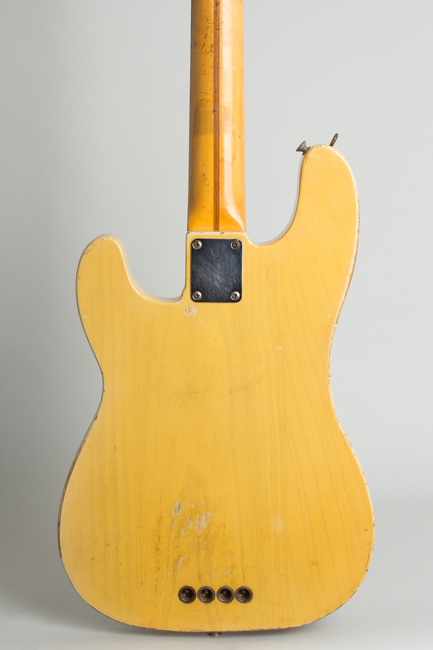 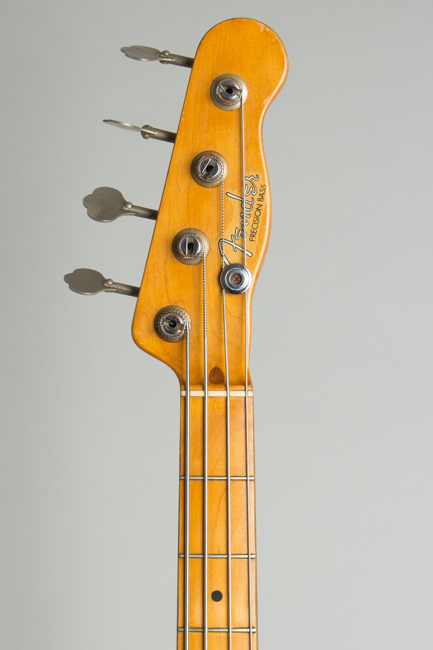 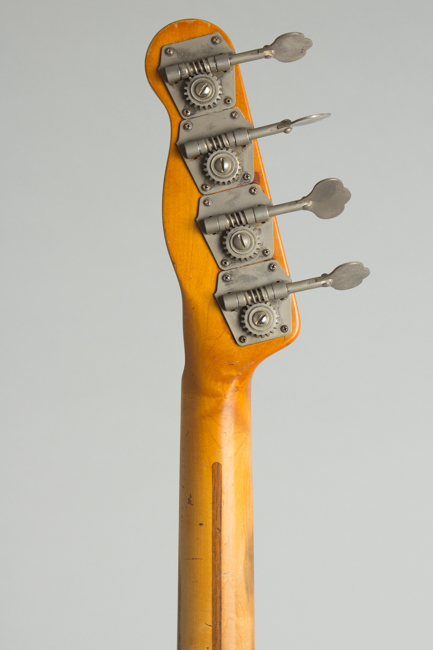 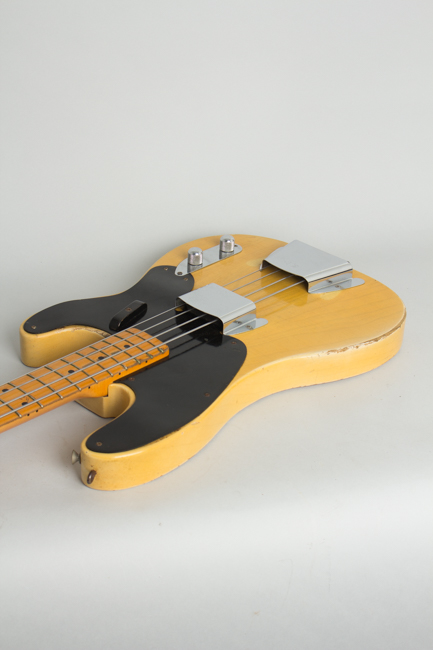 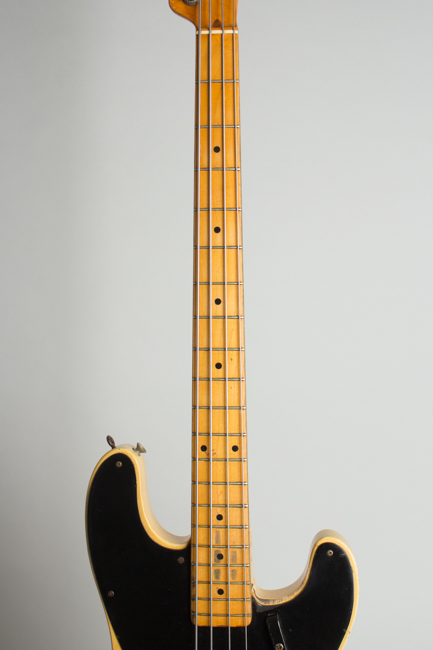 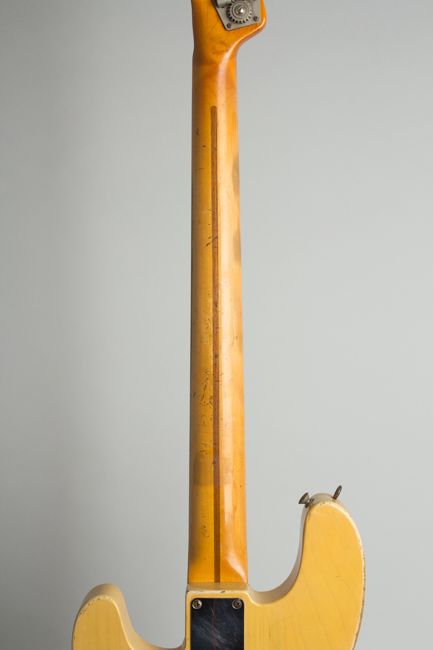 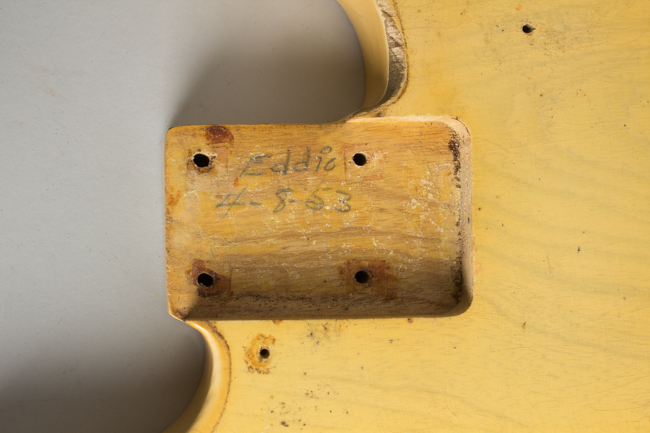 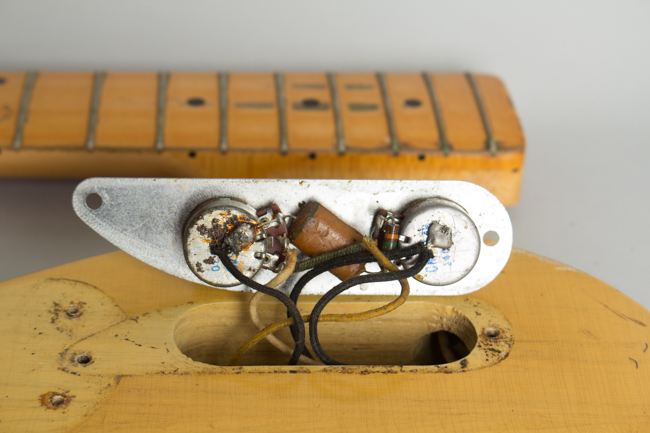 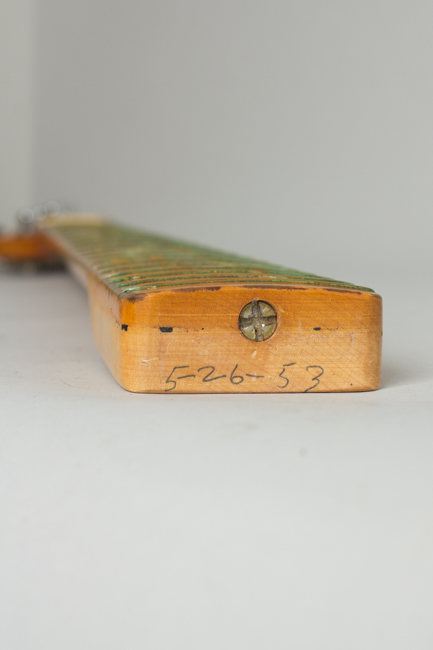 This is a truly great example of the first generation Fender Precision Bass -- the instrument that is perhaps the most influential of all Leo Fender's original creations. While there had been earlier attempts at purely electric basses, the Fender Precision was the first to be effectively marketed and although not instantly successful, eventually changed the world of bass playing forever. Virtually every electric bass since is descended from this model.

This Precision is from the model's second full production year, built at the company's original cinder-block factory in Fullerton, California in the first half of 1953. It remains unchanged from the very first Fender basses, sold starting in November 1951. The salient features of its original "baritone Telecaster" look include a one-piece maple neck, "butterscotch" blonde lacquer-finished slab-sided ash body, lacquered black fiber pickguard, dual fiber bridge saddles, and of course the original black-bobbin hand wound single coil pickup. The natural finish headstock is adorned with the original "Spaghetti" Fender logo decal, which is in excellent shape.

This bass carries the serial number 0582 stamped into the bridgeplate. Early Precision serial numbers are something of a jumble as the pre-stamped bridges were not mounted on instruments in any particular order. The heel of the neck is marked 5-26-53 in pencil, while the body carries a date mark of 4-8-53 in the neck cavity with the penciled "Eddie" beside. Eddie was responsible for a number of Telecaster and Precision Bass bodies from 1952-3. One of the pot date codes is legible reading 140-230 designating the 30th week of 1952.

The neck is fairly chunky with a rounded "C" profile, something of a handful compared to later Fender basses but slimmer than the "baseball bat" that legend often describes it as. The body is made of two pieces of lovely grained ash. The screws all Phillips-head types except those used for bridge adjustment, as expected for 1953. The single-coil pickup mounted in the center of the body is essentially a Telecaster unit with for poles, and has a fairly bright response with plenty of attack. The string ferrules on the back are larger than later models, designed to receive the huge "plug" ball end of the earliest Fender Bass strings.

The bass does have a few quirks; Leo Fender thought players would use their thumbs to play most of the time so there is a wooden finger rest mounted below the strings to facilitate this. The large chrome covers over the bridge and pickup seem redundant now, but Fender was prone to covering up the "works" on his early instruments this way. The most amazing thing is how much this first model got right; the 34" scale neck and uneven cutaway body are still standard today, and this earliest bass remains as functional as any that have come down the pike since.

Before 1954, the Telecaster and Precision Bass were the Fender company's most innovative and sensational products, causing a revolution in playing styles and shaking up the music world in a big way. They were a matched set totally unique in look, feel, and sound. The Telecaster became instantly popular particularly with country players. The Precision took longer to catch on but eventually changed the way the bass was played and heard irrevocably. The 1951-54 Precision Bass has no serious rivals as the most historically important electric bass of all, and to this day remains as fine a player's instrument as it was when first designed. Way to go Leo!

This bass has been played but not abused since it was shipped out in 1953, 67 years ago. All parts remain original, the instrument shows some light wear and tear but no major alterations. The thin lacquer body finish has ambered and checked somewhat and shows typical dings, dents, and worn spots, especially to the squared-off edges, but no large areas of loss. There is one relatively small spot of belt buckle wear to the back, lower down than usual near the string ferrules.

The face of this instrument shows far less wear than most. The only really notable spot is at the inside edge of the lower cutaway, where a player anchored their fingers while using their thumb as Leo intended. A wear pattern on the lower end of the fingerboard bears this out as well. The lower rim of the body by the strap pin is the only area of major finish disturbance, with some loss and flaking probably the result of exposure to damp. The fade under the bridge cover indicates it was mounted in the upside-down position for much of the bass's life; this was often done to move the foam mute pad (still intact on this one) off the strings and give a brighter, more sustaining response.

The neck finish both on the back and on the fingerboard shows much less wear down to the wood than many of these early basses. It has ambered to a deeper yellow hue and has some small dings and chips overall, with wear to the wood along most of the treble side and some of the bass side. As noted the only large spot down to wood on the fingerboard is between the 15th and 18th frets, caused by the player's picking hand, not fretting. The original narrow frets themselves show very little wear (this bass must have had flatwound strings on constantly) and remain perfectly playable; The bone nut is original as well.

All hardware on the instrument is original, down to the last screw. This includes the original single-coil pickup which -- unlike many -- does not appear to have ever been rewound. The coil of this unit is exposed when the chrome cover is removed, making it particularly vulnerable to damage. Many of these pickups were replaced or rewound long ago and it is always great to have an undisturbed one. The pickguard has some small chips into the surface above the strings, and a worn edge in the cutaway area from finger action. The original pressed fiber bridge saddles are in much better shape than most with only minimal sag and all adjustment screws are fully functional.

The only alteration to the instrument is a metal strap loop added to the upper horn above the original strap button; the original owner must have preferred a "dog clip" strap for a time. This could easily be removed and patched if desired but we have left it in place as a part of the unique history and character of this bass.

All these early Precisions are relatively rare; in the early 1950s these newfangled basses were sold in very small quantities compared to later years. Everything on this instrument (except the added dog-clip loop!) is as it left Fullerton in mid-1953, with less wear from years of hard gigging behind it than most and none of the modifications that befell too many of them. Wherever it has been, this is an extremely comfortable and great-feeling bass, a real playable piece of history. It resides in a later HSC. Excellent Condition.
×