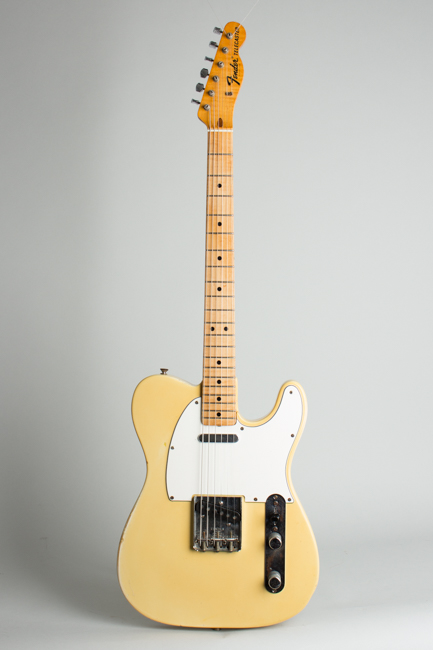 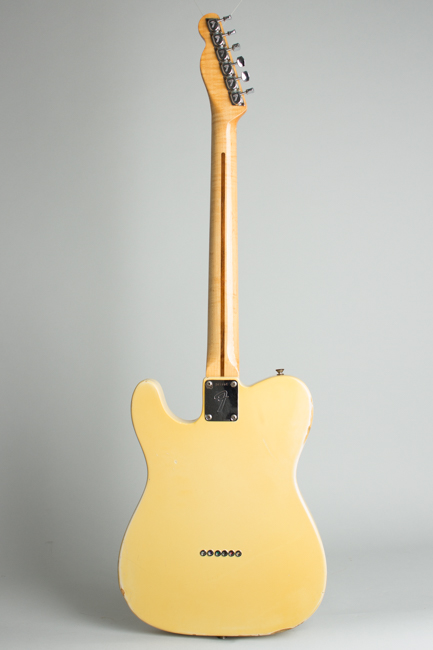 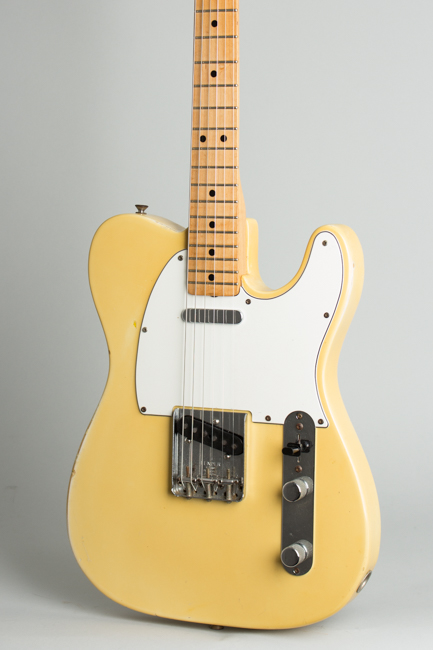 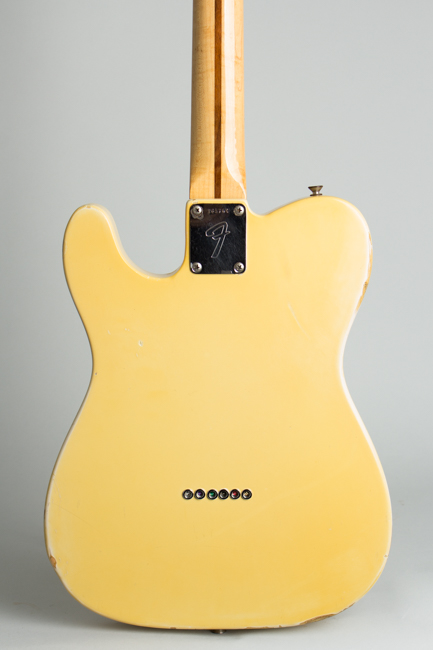 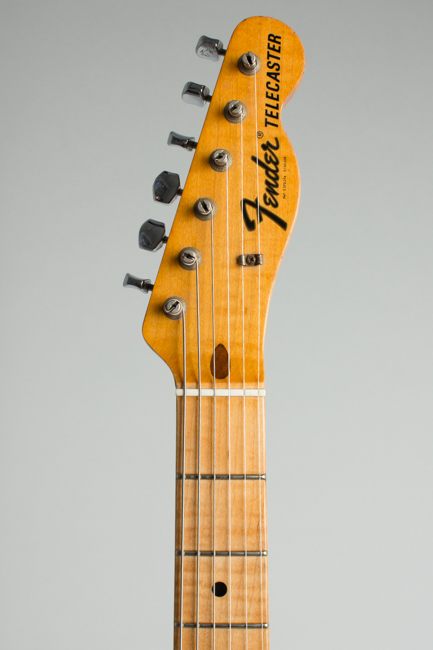 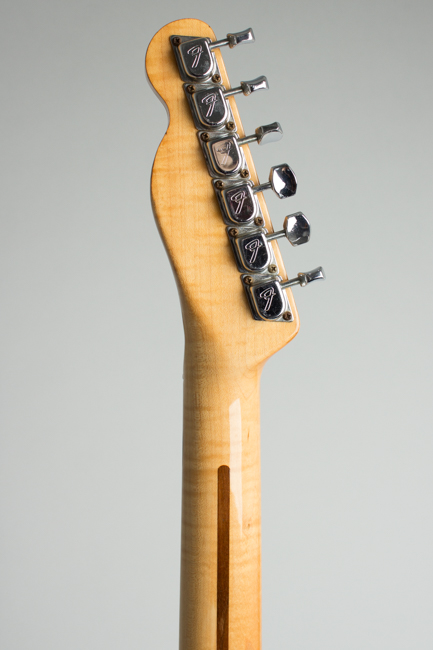 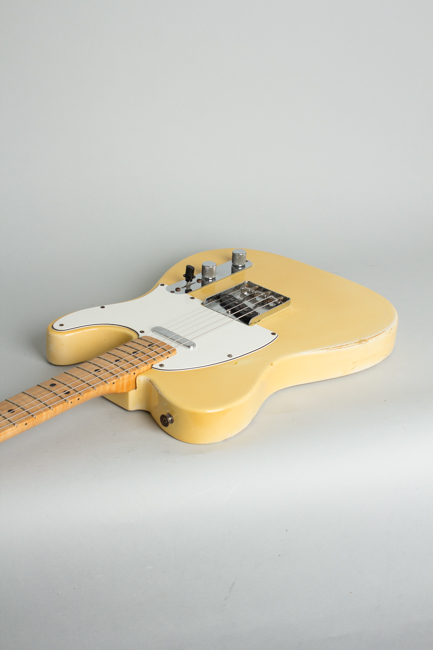 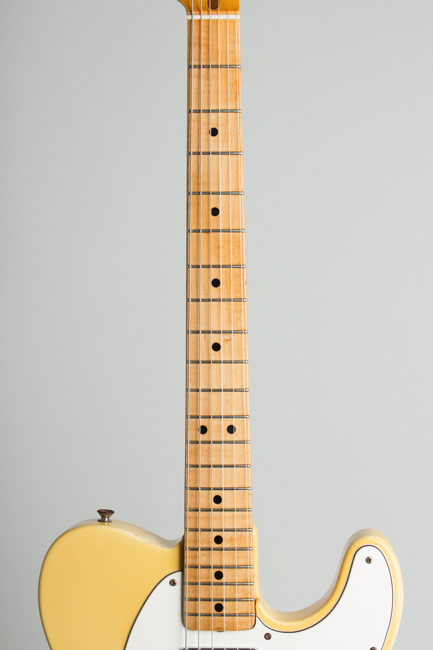 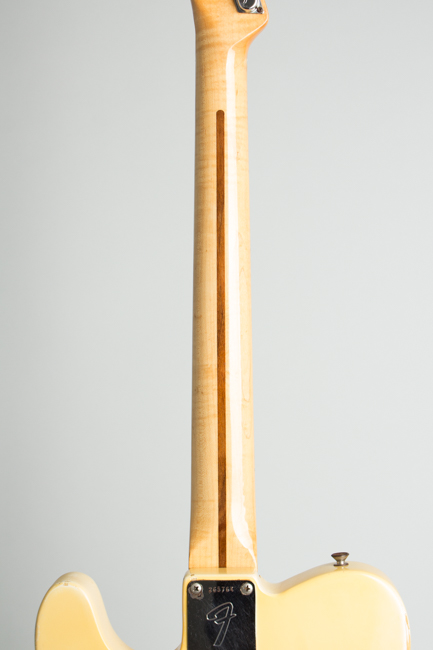 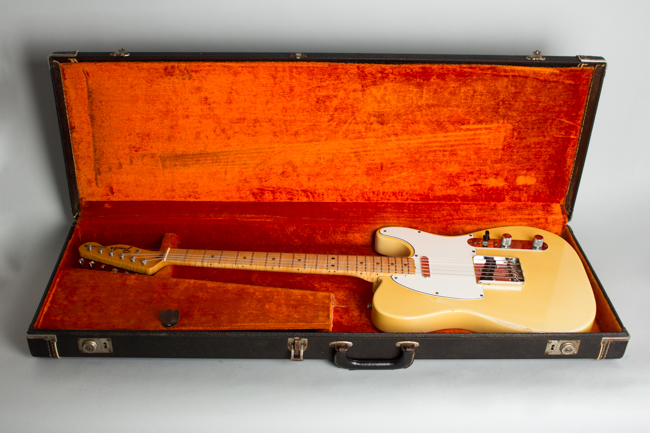 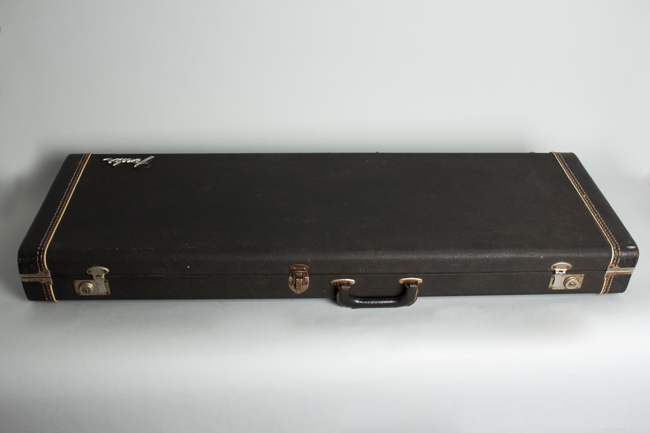 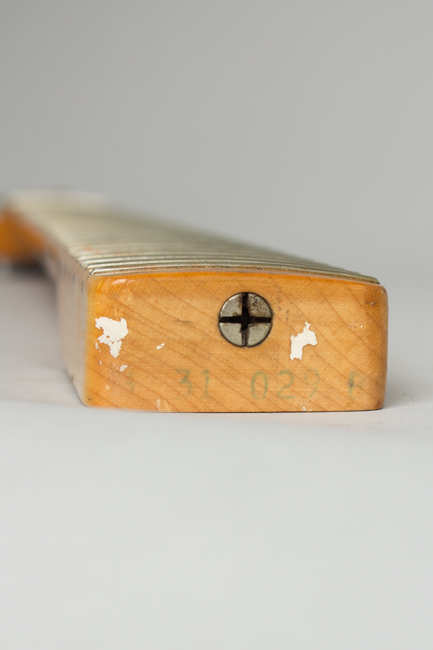 This is a fine playing Fender Telecaster from 1969, with features particular to that early-CBS era. It has had some minor internal modification over the decades but is nicely restored to its original appearance and character. The maple neck carries and early "green code" stamp dating it to February 1969. The original 1950's style one piece neck had at this point just recently been re-introduced after being discontinued in 1959.

The Fender headstock logo is in the newer large-letter style which had been introduced in 1967, for better visibility on TV according to CBS theory. The tuners are the Fender "F" logo style that replaced the earlier Klusons, and the pickguard is 3-ply white plastic. The pots date to 36th week of 1966, when a huge quantity were bought in by the CBS purchasing department, supplies of which lasted into the 1970s.

The neck and body are finished in the transitional style typical of 1968-9; the coating a bit heavier than the nid-60s lacquer but not the more plasticy "Thick skin" finish adopted in the early 1970's. The body has almost no ash grain visible, and has yellowed somewhat over time for a nice natural relic look. The neck has some nice flame to the maple particularly on the headstock. At 7.73 lbs. this guitar is lighter than many 1970's examples and handles very well. Even slipping into that "true-CBS" Fender period it still has the classic Tele sound and character in spades.

This Tele has had some typical maintenance work and minor restoration to excellent playing condition. The maple neck has been expertly refretted with the correct style wire and the fingerboard refinished in lacquer, giving it a more natural feel then the original polyester. The original finish on the rest of the neck has not been disturbed, and is very clean with only a few tiny dings and dents.

The body finish shows more general wear, especially along the edges as is typical with slab-sided Telecasters. There is one noticeable filled ding above the upper curve of the pickguard, with some scratching and scuffing around that general area, probably from a clumsy attempt to polish it out. At some point a Stratocaster (or similar) pickup was fitted in the neck position. This entailed just a bit of routing to enlarge the cavity, which has not been filled in or touched up. The pickup currently fitted is a correct Telecaster unit which looks somewhat later than the original. The bridge pickup appears original, it is the correct grey-bobbin unit for a 1969 instrument. Both pickups have been expertly re-wound and re-leaded with cloth wire by New York's own Tom Crandall, and sound very good indeed.

The pickguard is the correct 3-ply white style but of somewhat later vintage; it's likely the original guard had its pickup pocket opened out a bit for the larger-coil Strat unit once installed. The only other oddity is the bridge pickup rout has been just slightly deepened, with no visible evidence as to why. Occasionally this was actually done at the factory, if the finish pooled to heavily in the cavity and the assembler needed more clearance. In this case we can't say for sure when or why it was done, but it does not affect the instrument in any practical way. All other hardware including the bridge unit, tuners, pots and switch and strap buttons remain original.

Overall this is an excellent playing Telecaster, with all the restoration work done to a high level. The frets are excellent, both pickups sound great and from the outside it appears all original. It is housed in a very nice original black Tolex fender HSC and the "eau du Fendeur" smell is perfect, with no musty overtones. This is a second owner guitar looking for a third, a nice feeling Fender with a lovely bright but full sound a bit less spiky and shrill than many 1969-70 examples. Overall Very Good + Condition.
×