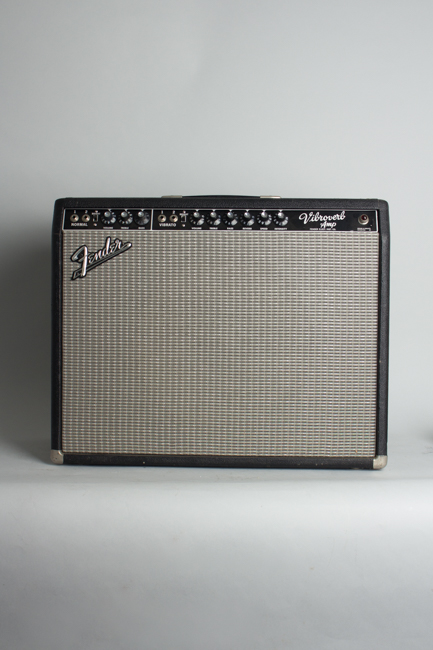 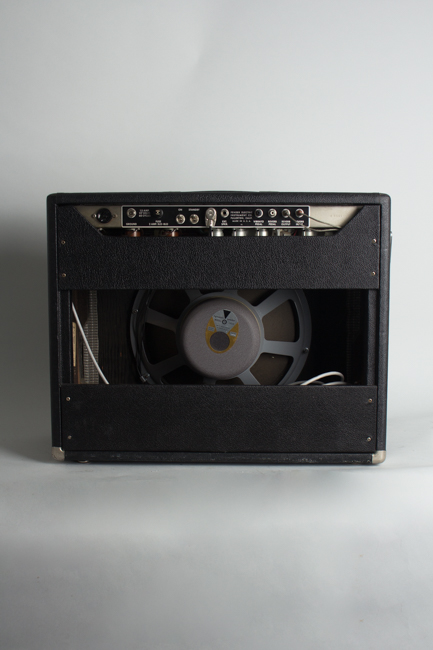 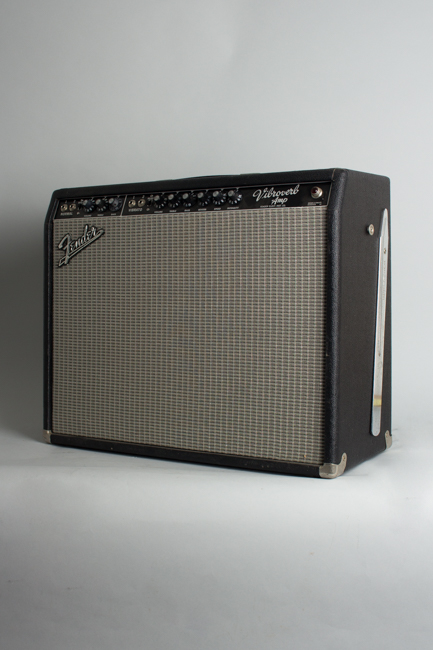 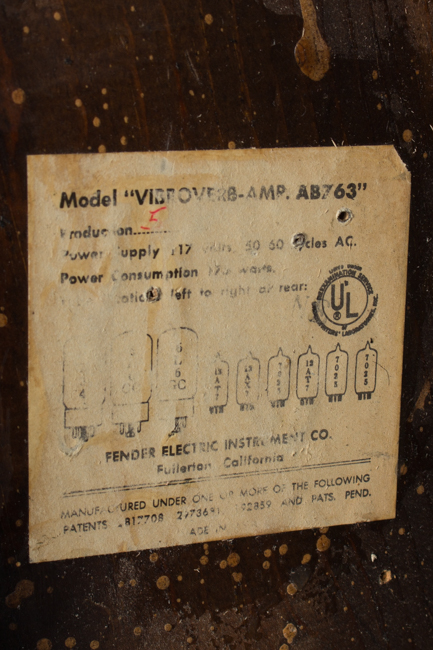 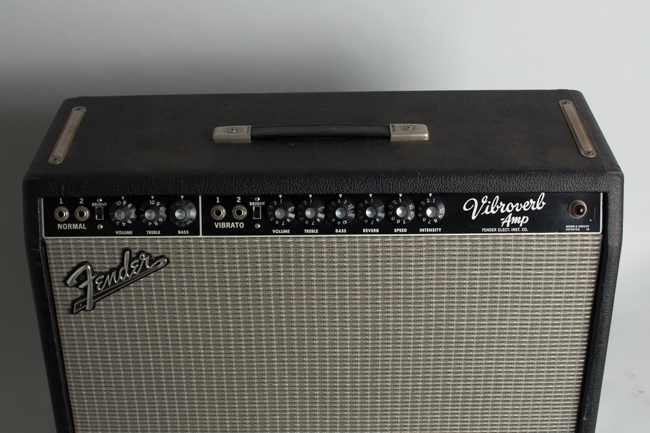 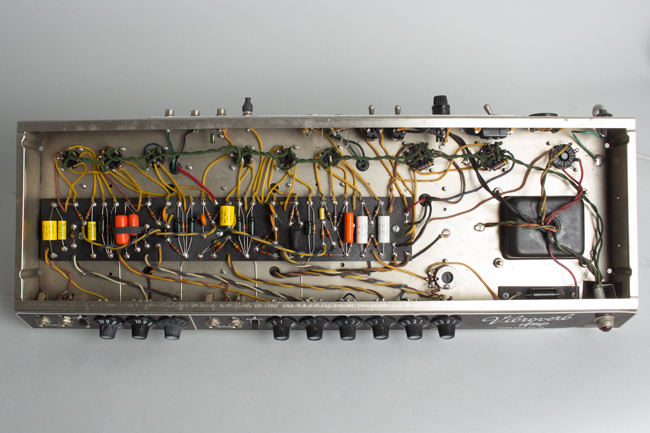 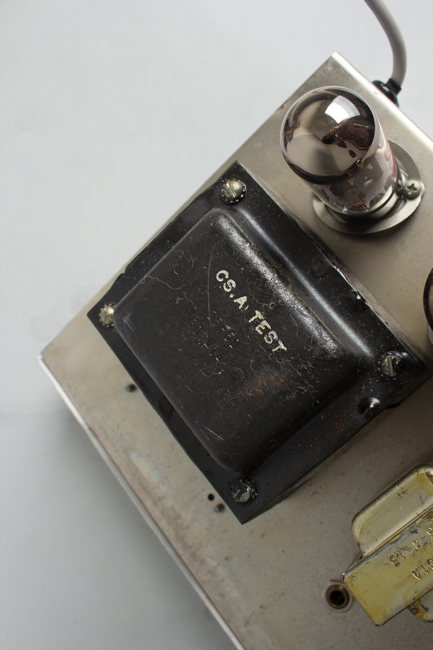 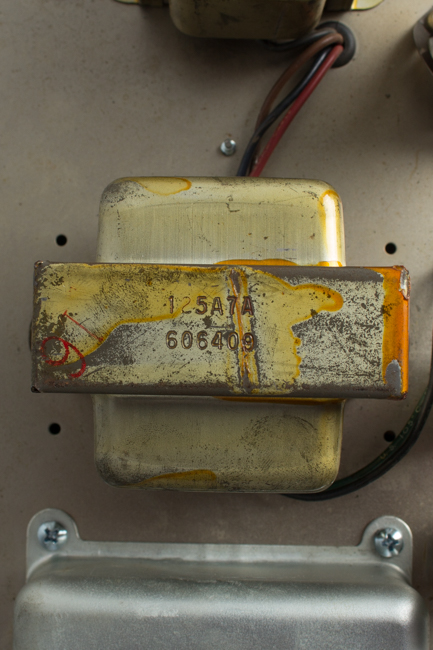 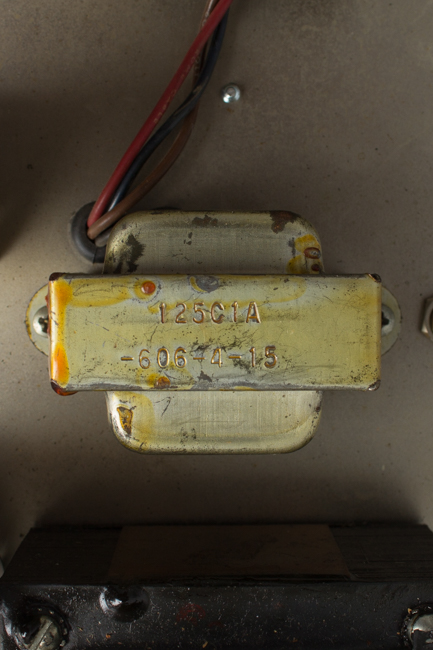 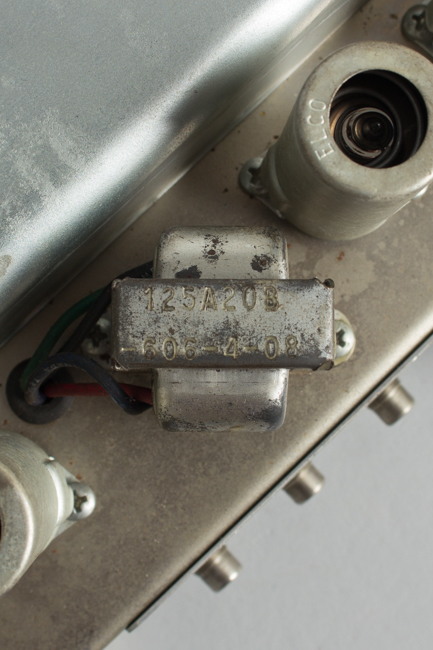 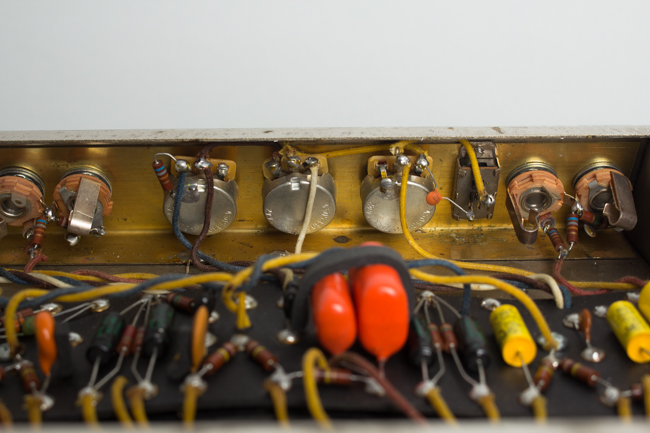 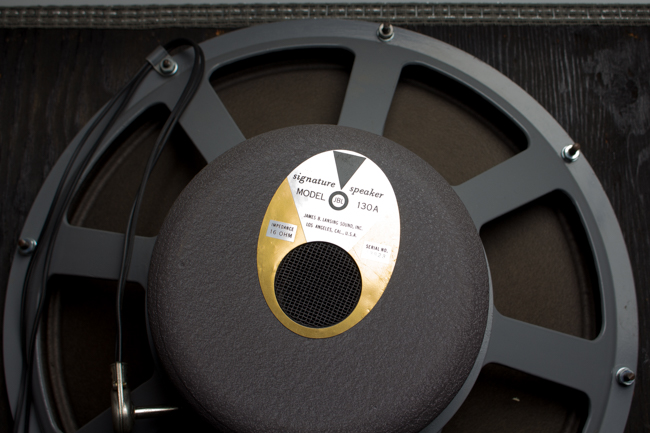 The 1964 Vibroverb is a sought-after Fender model, often cited as "The Stevie Ray Vaughan amp" but this one has a wholly different provenance as belonging to Ry Cooder, a backup to his former main stage amp. It has some internal work over the years but is not heavily modded from spec. This amp has been worked on by Danny McKinney of Requisite Audio, who maintained and specially tuned it to Ry Cooder's specs. This amp shows some light general wear overall, but is not too heavily worn.

The Vibroverb was Fender's first on-board Reverb-equipped amplifier, putting out around 40 watts of power and the only 1960s Fender amp to combine a slightly darker-sounding 15" speaker with on-board reverb and tremolo. Early black panel Vibroverbs came equipped with a 15 inch CTS speaker, while many later ones used a pricier JBL D130F. This amp (likely at Cooder's behest) mounts a vintage JBL 130A, serial no. 23823 (which most sources suggest dates to the late 50s).

This amp was assembled in May 1964 as designated by the tube chart code "NE". The transformers are all Schumacher which are correct and original: The Power transformer is coded 606-414, the output coded 606-409 and the choke and reverb transformers are coded 606-409 and 606-408, respectively. The pots have been nearly all replaced with newer CTS 450S models, except for bias trim pot which is original, coded 137 6401. This was an elaborate operation on this fairly complex amp; we are not sure why it was done but this is very high level work and all values are exactly correct. The front panel knobs were also replaced, probably at the same time.

This amp has likely had several speakers in it over time; The baffle grille cloth replaced, while the baffle itself is original or at least a correct period piece. The baffle supports on each side have been cut into somewhat, at some point a different baffle likely holding two off-set 12" speakers was probably fitted. It mounts a newer 3-prong grounded plug and speaker cabling, the trem is set up to be always on with no pedal mounted. This was the backup amp to Ry Cooder's #1 stage Vibroverb, which from the looks of it saw much more use on the road as this one. Nevertheless this comes from the man himself, and is a great sounding amp on its own merits, tweaked by a master.

We have tested the amp but not done our usual electronics maintenance work, preferring to leave it as it came direct from Ry Cooder's amplifier maven Danny McKinney. The speaker has a bit cone buzz at higher volume levels, it is still the original JBL cone. This could easily be replaced or re-coned but again we prefer to keep it exactly as last used by Ry rather than "improve" anything! Excellent Condition.
×