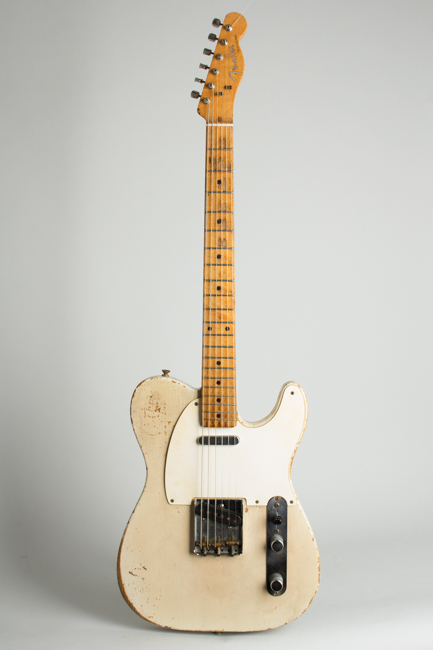 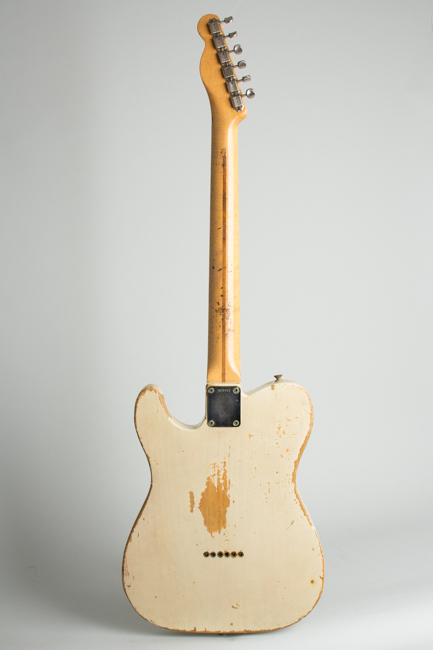 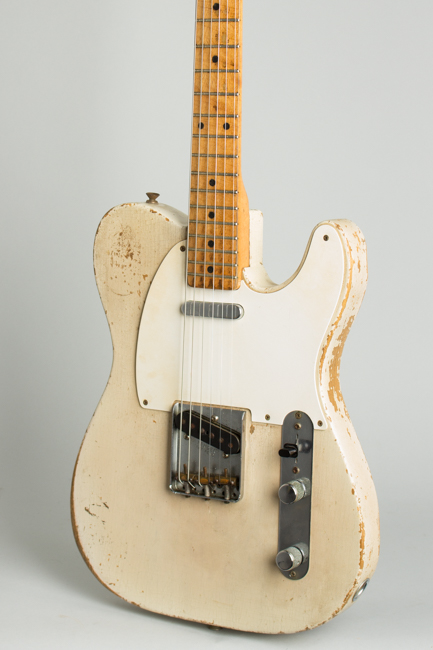 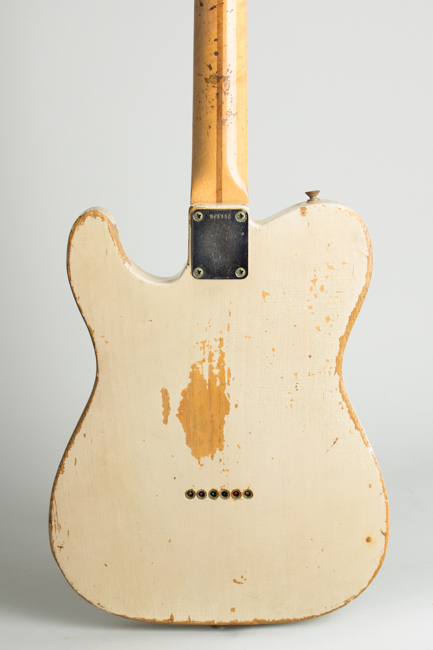 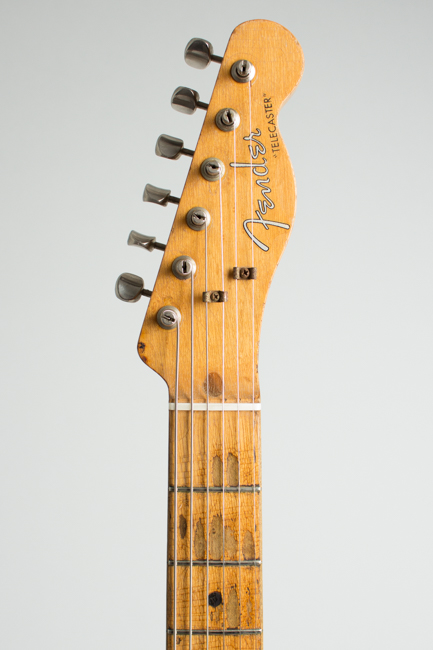 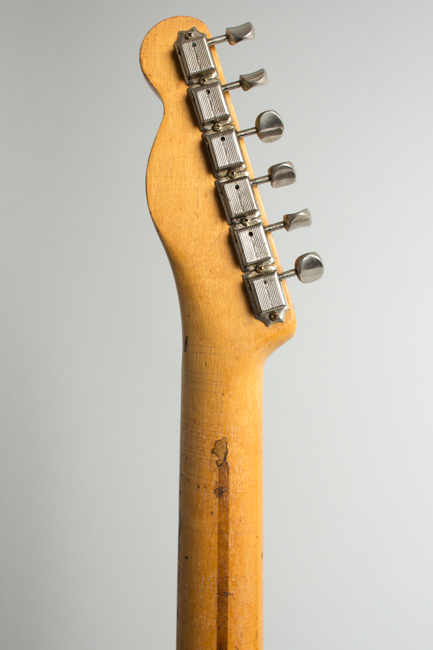 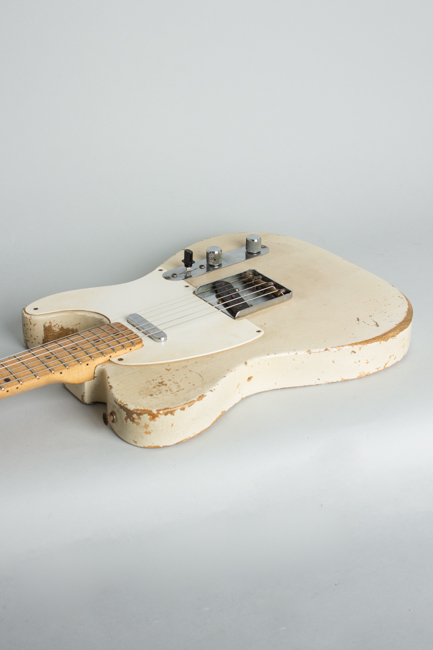 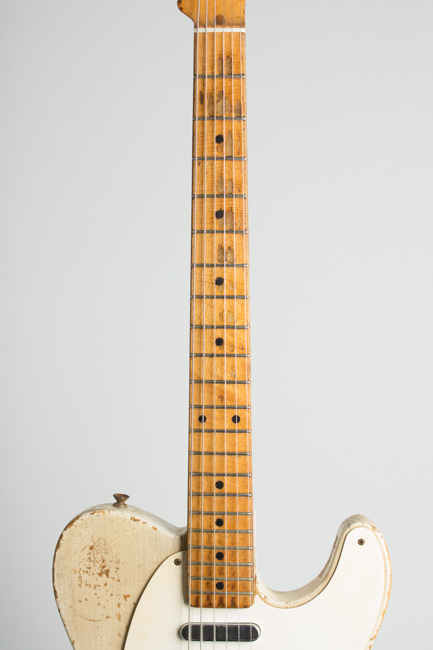 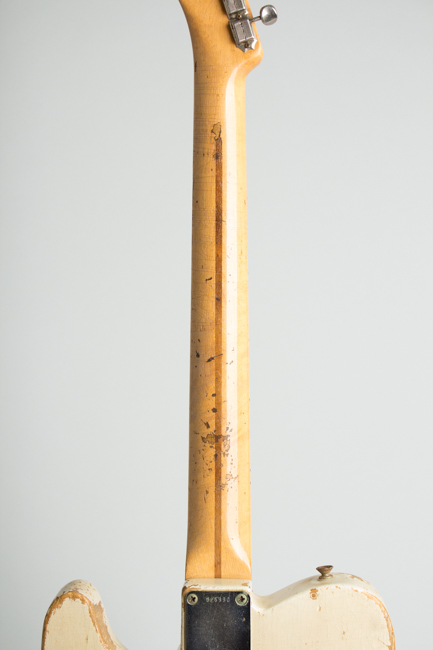 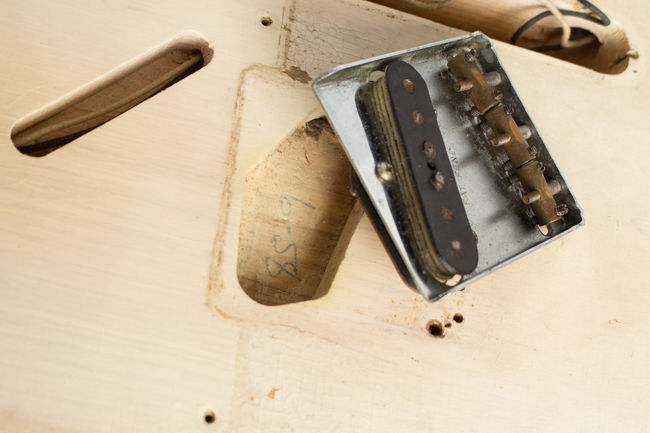 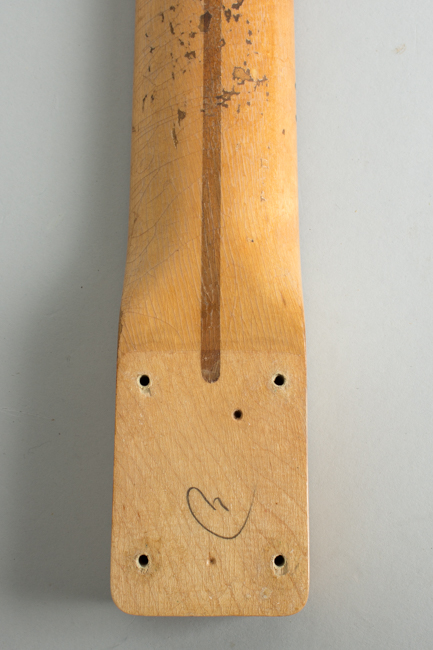 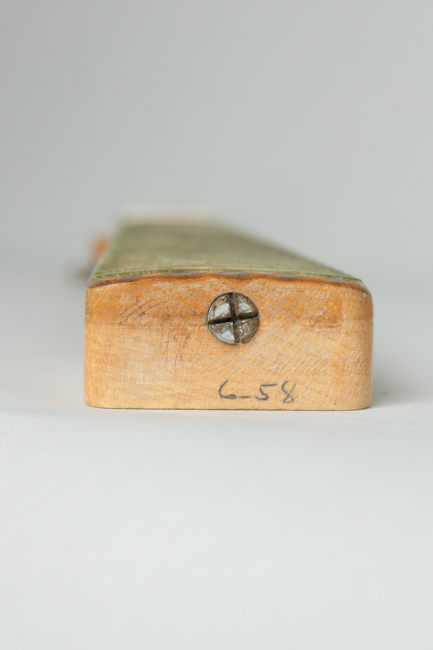 This is one of those "True Relic" guitars; a very played-in but still largely original "white guard" 1958 Fender Telecaster. Overall it shows some fairly heavy wear with a lot of checking and flaking to the finish, which usually indicates having been stored in a damp area some time long ago. The finish on the neck and body is solid and not flaking further, except a few small spots.

This guitar shows characteristic features of this period. The most immediately noticeable is the single-ply white plastic pickguard which in 1954-5 replaced the earlier black phenolic on Teles and Precision Basses, making the look consistent with the then-new Stratocaster. The ash body has a much lighter and "whiter" blonde finish compared to the more amber earlier '50s-style butterscotch hue. This "white-blonde" look would be the norm into the '60s, continuing up into the CBS era. This one has strings through the body but was made not long before the Telecaster was altered to the "top loader" stringing for a couple of years.

The body is dated 6-58 in the pickup cavity, the one-piece maple neck is dated the same at the heel. The back of the neck has a fairly slim round contour, the "V" spine used in 1957 having given way to a softer shape that is not as deeply "C" shaped as the earlier models. On the headstock the old-style script Fender "Telecaster" logo decal is positioned above the "butterfly" string tree; this guitar had a second string tree added long ago.

The staggered-pole lead pickup is generally similar to earlier Telecaster units but with the altered magnet layout; the center poles are raised slightly. The original tone pot is coded 137 819, made the 19th week of 1958. This guitar's wiring has been altered to "modern" spec. The volume pot was changed long ago; it is the correct style CTS part coded indicating manufacture in either 1951 more likely 1961. There has been some wiring work over the years, when the switching was changed to "modern" (i.e. post-1967) scheme with the two pickups blended in the middle switch position. Like all Telecasters prior to the CBS era this guitar would have originally come with a "deep bass" cap engaged in the front switch position that most players found useless even then. The pickups are original, the lead coil looks to have been re-potted with wax sometime back and had the copper back plate re-soldered.

The serial number is stamped on the neck plate having been moved there from the bridge tray a couple of years earlier when Fender harmonized all their electric guitars into one number series in 1955. This nominally 5-digit number is preceded by a "0", a quirk of Fender neckplates from this specific period. The knobs are a medium pattern knurl with a flat top and the switch tip is the "top hat" style that has endured as a Tele trademark.

This 1958 Telecaster looks to have had some adventures over the last 60+ years and has an authentic "relic" look to it. It remains a fantastic-sounding guitar and a joy to play, with that genuine "worn-in Fender" feel that is very difficult to capture. By 1958 the Telecaster had become a success, renowned as a popular tool used by working musicians, including a host of early rock'n'roll and country players. Many have been played for decades and worn virtually into the ground; this one has its road scars but is still a truly great instrument and a genuine relic of the best years of Leo Fender's company.

This old Telecaster has seen its share of play time and minor work over the years, but nothing that alters its essential character. "Genuine relic" pretty much sums it up! The body finish has a lot of checking, chipping and flaking and general play wear as well. The finish is solid, and is not suffering further flaking beyond what is already gone. The edges have the most loss as is typical with Telecasters. There is a heavily worn away spot inside the cutaway horn; someone may have worn a heavy pinky ring while playing this guitar long ago! All finish is original with no visible touch up or overspray.

The pickups and most of the electronics are original, as noted the lead pickup looks to have been wax potted again later and the base plate re-soldered. Except for the volume pot (which is period) all other components in the rig are original; there has been a decent amount of re-wiring with the original cloth wire when the guitar was altered to the "modern" switching scheme.

The chrome hardware has some wear as would be expected. The strap buttons, neckplate, control plate, knob, switch and switch tip are all original The original pickguard is intact but shows scuffing and some yellowing; it is warped up slightly at the top edge and there is a tiny crack by the upper forward screw. The neck pickup cover has some dings and dents in the top surface.

The headstock has been neatly re-fitted with the exact correct original tuners; there are faint compression rings visible on the headstock face from something else and a couple of small patched chips by the grommets. As noted a second string tree was added long ago. There is a small "classic cigarette burn in the traditional low E string spot. The nut is newer; the decal is original and nicely preserved. The back of the neck has some dings and dents but less wear to the finish than might be expected.

The frets are either original or a very old refret with the factory style wire. They are fairly well worn down, crowned flatter than stock and sitting close to the fingerboard. There is not much divoting evident; the guitar still plays well as it stands but for some players a refret is not far off. There are typical wear spots into the maple fingerboard up to around the 10th fret area but nothing excessive, with some "strumwear" at the body end of the board.

This is a lovely sounding Telecaster, with a richer and slightly mellower tone than many '58s we have heard. It is simply redolent of many years of history use, with a super vibe to go with its sound. It is a "genuine relic" Fender in every sense. Overall Very Good + Condition.
×