Supertone Gene Autry Round Up Flat Top Acoustic Guitar, made by Harmony (1940) 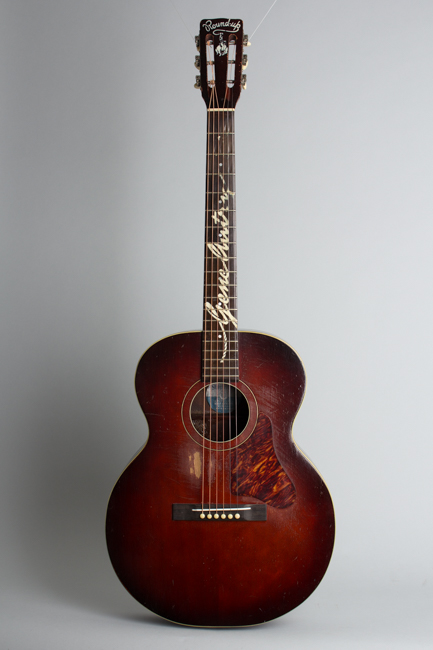 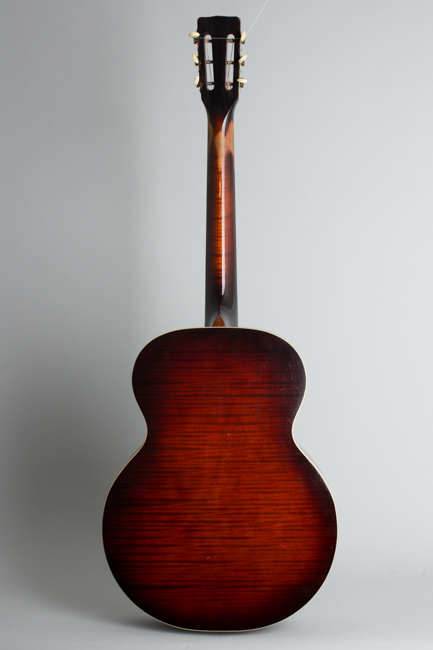 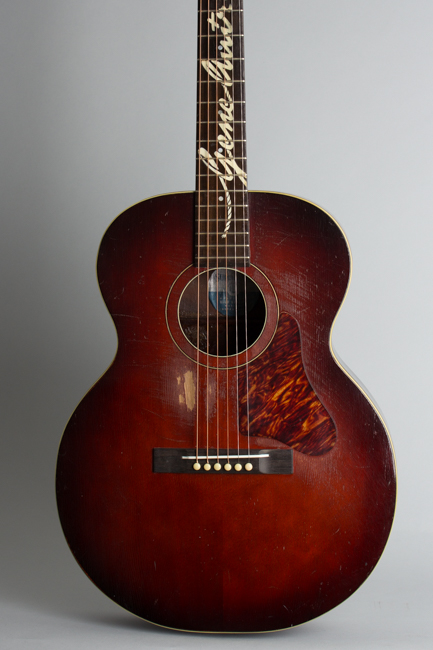 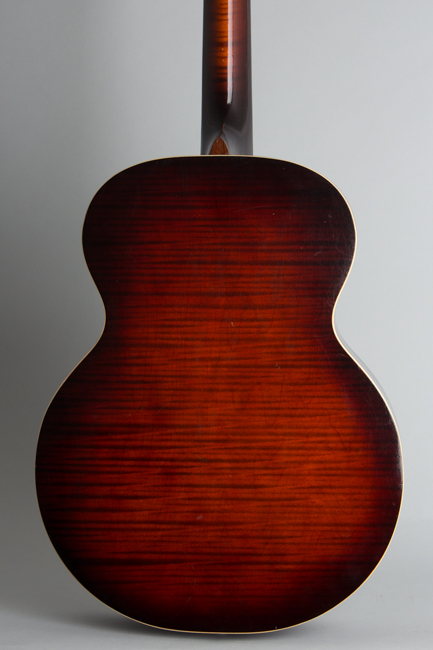 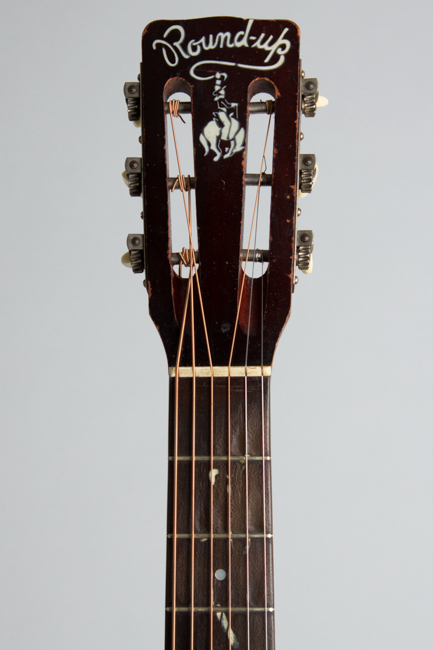 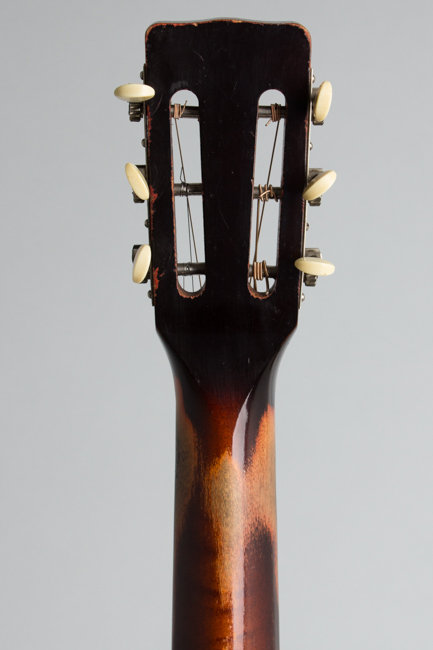 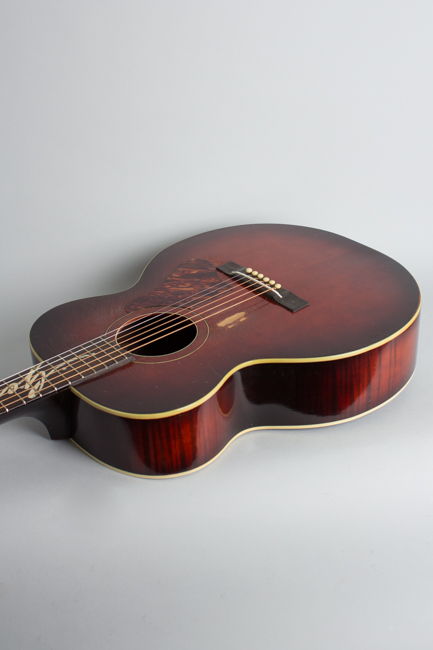 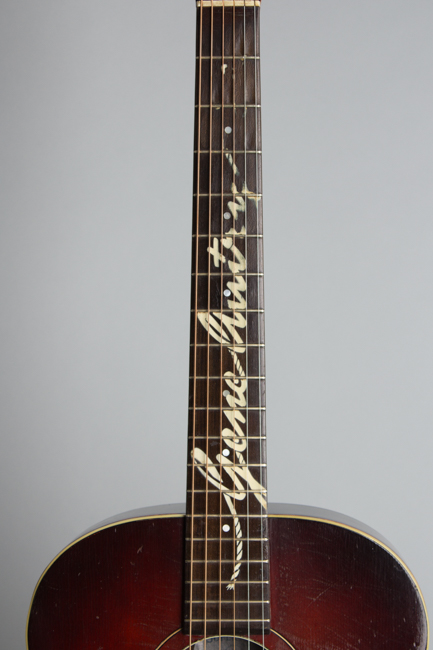 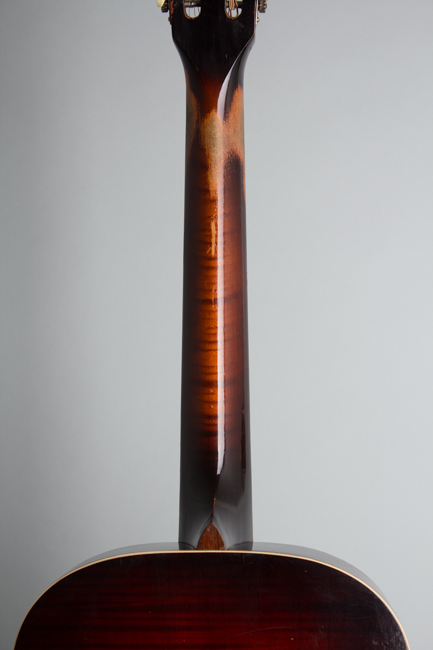 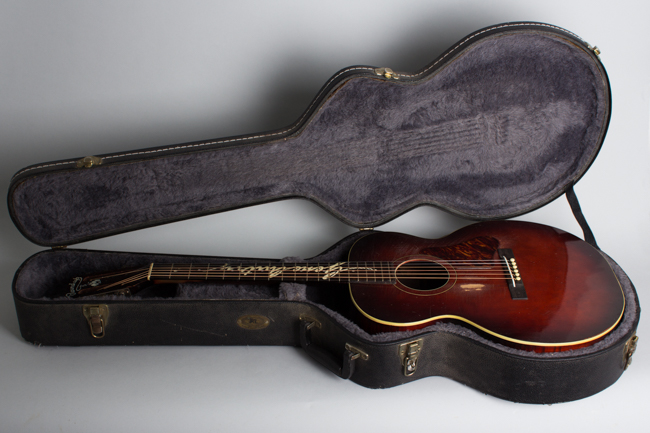 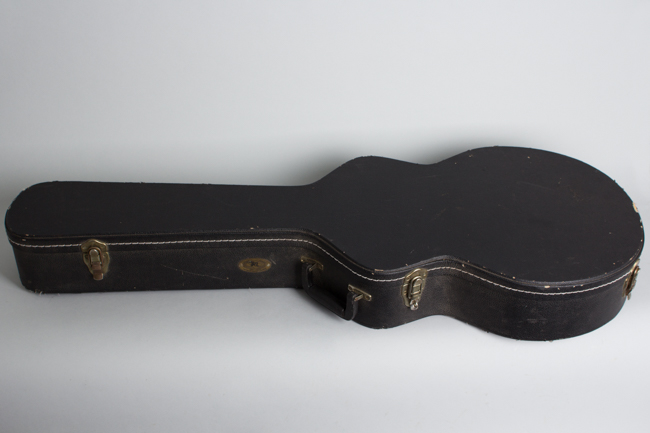 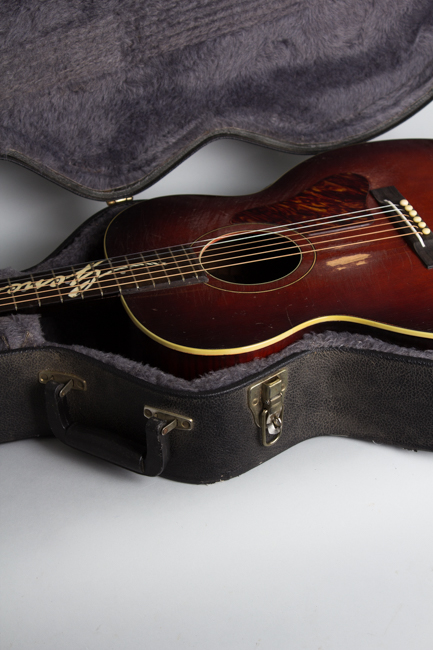 This cheerful instrument is the third and by far rarest version of the Supertone Gene Autry Roundup Guitar, a Sears catalog mainstay throughout the 1930s. Earlier versions were small body instruments, not quite toys perhaps but not professional instruments, clearly intended for the nation of young aspiring cowpokes who wanted to emulate their crooning hero. These were superseded for the 1939-40 model year by this much more pro-quality design; if not up to Martin or Gibson standards it is a still genuinely well made and surprisingly playable guitar.

Sears introduced its first Gene Autry Roundup signature guitar in 1932, meant to capitalize on Autry's broadcasting success on the Chicago-based radio station WLS. The first version was a very basic-grade Harmony flat top much like the earlier Bradley Kincaid model, but instead of 'hound dog' graphics a stenciled cowboy scene and Autry's signature graced the top. The successful Roundup was upgraded 1935 to a concert size body (14 inch) with 14 frets clear of the body. In 1939 the Roundup grew again to this ultimate 15 inch grand concert size with a sunburst finish. The Roundup was discontinued in 1941.

This is that final 15 inch grand-concert-sized Autry model, a much better instrument than its predecessors. It is built with a solid birch back and sides, solid spruce top and a poplar neck. The celluloid bound top has a nicely blended dark red sunburst, extended to the neck, sides and back which have an artfully applied faux grain pattern. The decorative stencils that adorned on the top of earlier models were abandoned, but Autry's signature in a lariat pattern runs the length of the fingerboard. There is a small tortoise celluloid pickguard in the usual spot, and W/B/W soundhole rings.

In 1940 Sears divested the Harmony subsidiary they had owned since 1916, selling it to a group of Harmony executives headed by Jay Kraus. The next year Sears changed its musical instrument brand from Supertone to Silvertone making this a late example of that marque. This guitar is easily a couple of notches above the earlier Autry models in both playability and sound, sonically on par with many of the better Harmony instrument of the pre-war era and a nice wrap-up to that first Cowboy Guitar era.

This is a well-worn but very playable example of this pre-war Cowboy Classic. The neck has been cleanly reset, the bridge is an ebony replacement of the same size and shape as the dyed maple original, using the original un-slotted white bridge pins. There are a pair of soundly glued cracks in the fingerboard under the last few frets of the fingerboard extension. The frets themselves are original with plenty of life left.

The top shows some heavy pick-wear around the treble side sound hole, the pickguard and areas worn through the finish in between the soundhole and the bridge. The body and neck are crack free and the finish has not been oversprayed. The top is ladder-braced and several of the top and back braces have been reglued; there is a large and some what unsightly blob of ancient hide glue adjacent to the brace under the soundhole. The finish on back of the neck is worn through in the first position and the headstock shows a nicks and marks from years of use.

The fingerboard signature is painted on and has worn away in the first position, though a faint impression of the brim of the hat, originally painted between the second and third frets, is still visible. The fingerboard shows wear -- appropriately enough -- in the first 'cowboy chord' position. The original white button strip tuners still look good and function well. This is really a surprisingly good guitar, considering it was intended for sale to young amateurs when new. With a little love it has turned into a very functional instrument, obviously not equal to a Martin (which is what Autry actually played!) but on its own merits a lovely piece of playable western nostalgia. Very Good + Condition.
×