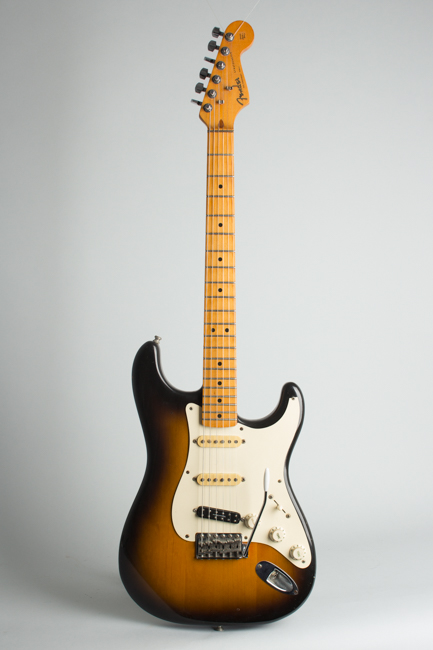 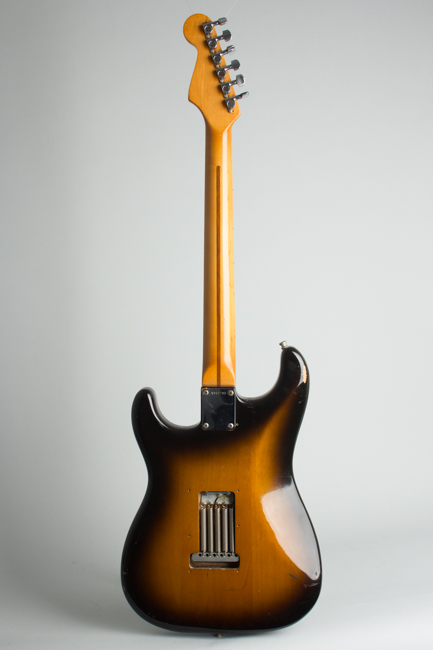 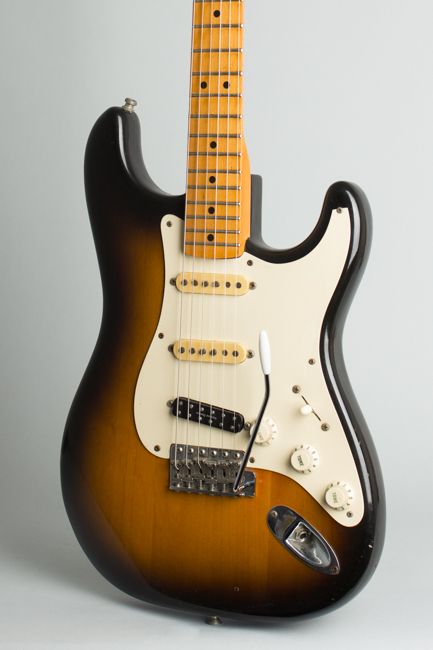 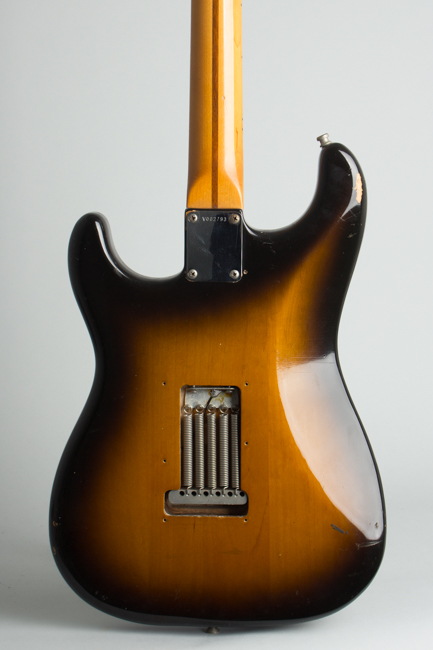 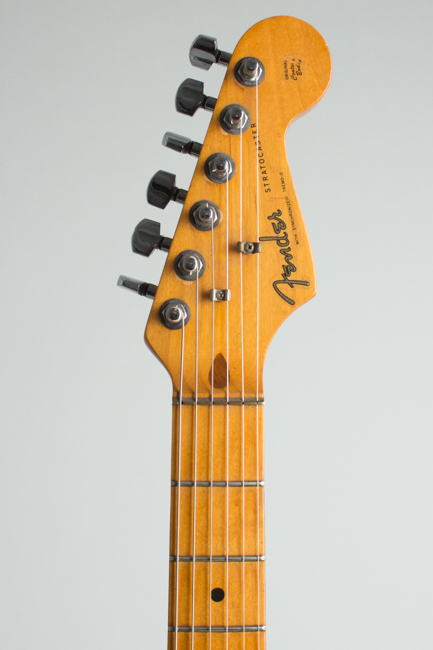 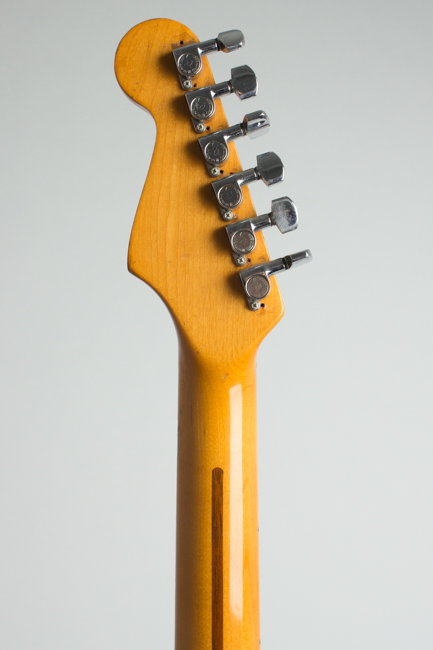 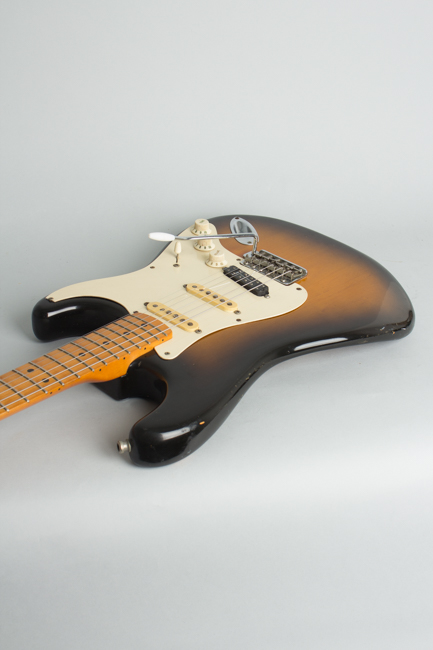 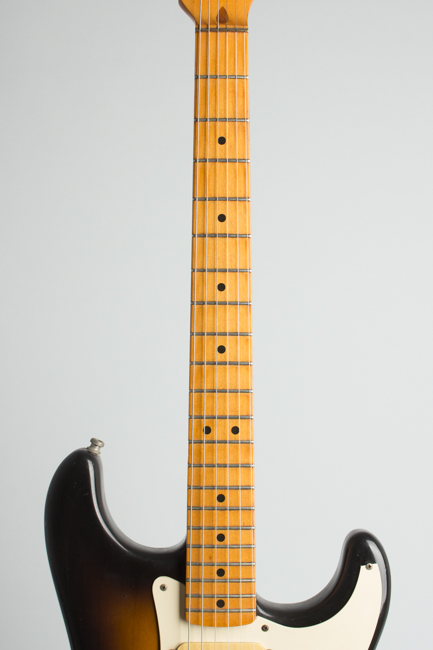 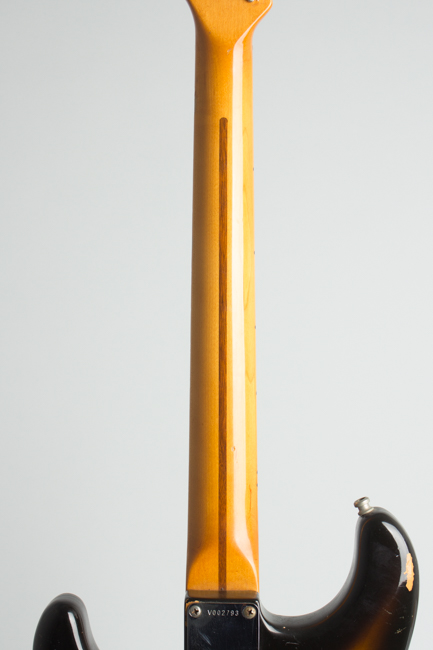 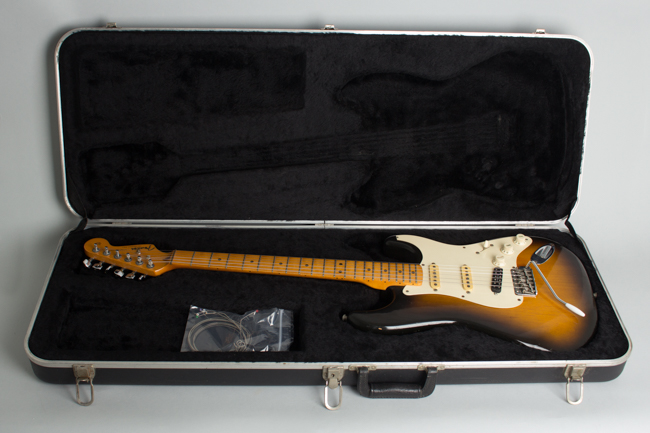 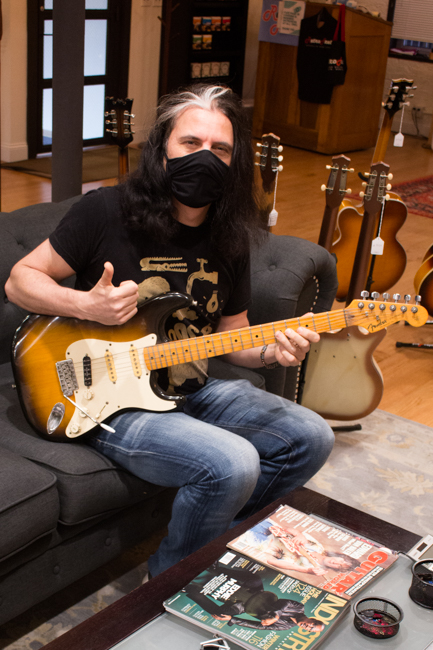 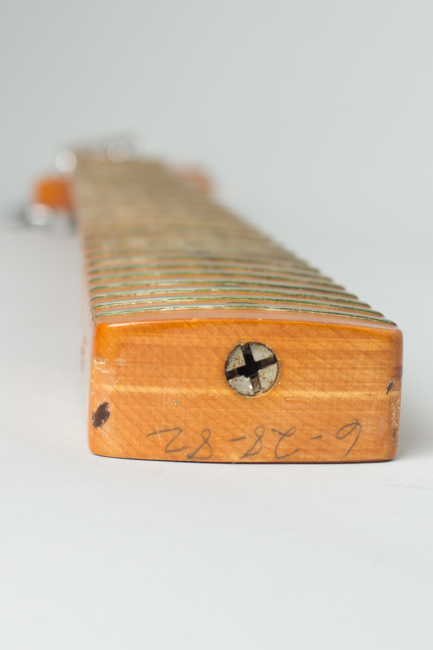 Around the time the CBS/Fender era was coming to an end, criticism from musicians that the corporation had long been sacrificing quality to improve profitability had begun to sink in with the folks running the company. A group of Fender executives initiated a project to re-issue selected models in their older formats to prove that they could achieve a return to pre-CBS quality. This led to a set of Fenders which were carefully made reproductions of 1950s and '60s classics produced in the original Fullerton, California production facility. These Fullerton-made instruments have become quite sought after in the years since and are known by the collector's acronym -- "AVRI" for "American Vintage Re Issue"

This is a very early first-year example of the '57 reissue, modified somewhat in the 1980s and previously owned for some time by multi-faceted guitar maven Alex Skolnick, who picked up as a "Working Strat" years back. The neck date is 6-28-82 and the two remaining original red-bobbin pickups are marked 29-21-82, while the pots are all from the 6th week of that year. Designed as a close copy of the original 1957 Stratocaster, the 1982 57 American Vintage Reissue features a 21-fret maple neck with maple fingerboard, vintage-size frets, alder body, white pickguard, optional 5-way selector switch, and vintage-style vibrato/bridge.

The modifications to this guitar are typical but not overly intrusive. The headstock was "Schallerized" as were many in the 1980's. original tuners could be re-fitted but the signs would remain. The bridge pickup was replaced with a Seymour Duncan small-coil humbucker that fits the existing pickguard hole, this dual-coil unit is much higher output than the standard Strat pickups. A touch of extra routing was done to the body where it is mounted, and there is another spot on the outer edge of the control cavity; this may be factory (just like in the 1950's) or done when the pickup was changed. The optional 5-way switch is mounted. Although these early AVRI reissues are somewhat collectible now, at the time these were gigging guitars and this one was treated as such. Alex Skolnick told us he kept this in his arsenal for "Strat sounds" but as he is mainly not a Strat player it was not generally a stage guitar.

While the early 1980's guitars are not EXACTLY accurate re-creations, they were far closer than anything Fender had built since 1966 to Leo's original creations. The Fullerton reissue era was very brief and lasted only from 1982-84, as then Fender was sold off by CBS and moved to a new Corona, CA factory in 1985. These Fullerton guitars -- made on some of the old machines dating back to the '50s and '60s -- are prized today for their rarity, tone, and direct connection to the original Fender company.

This guitar shows moderate wear overall, with dings, dents and scuffs to the original finish but only one large worn-away area on the back of the upper horn. The neck and frets are comparatively clean, somewhat "Smoked" in appearance with some small chips and dings. The tip of the pickguard is broken off on the lower cutaway horn. There is some very light corrosion on the bridgeplate and saddles.

The hardware is mostly original except for the changes noted above, mainly Schaller tuners and the Seymour Duncan bridge pickup. Additionally the nut is a finely sculpted brass piece (very 1980s), the upper strap button has been changed and there is no back coverplate over the trem cavity. The trem itself is screwed down hard, almost to a hardtail feel although an arm is mounted. This can be easily alerted but we have left it as Alex had it for the time being. This is a fine playing and sounding gigging Strat with a cool provenance. Overall Excellent - Condition.
×