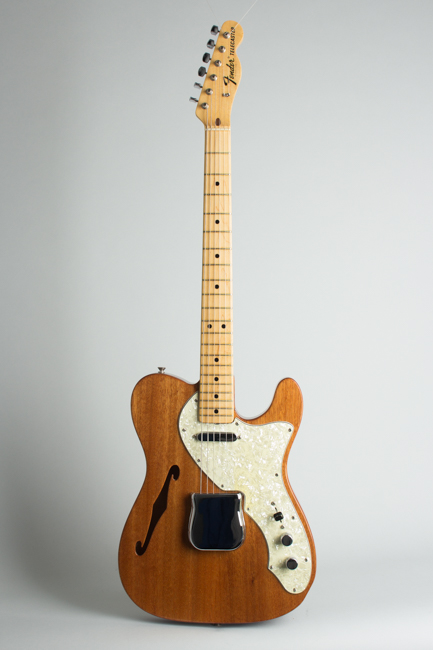 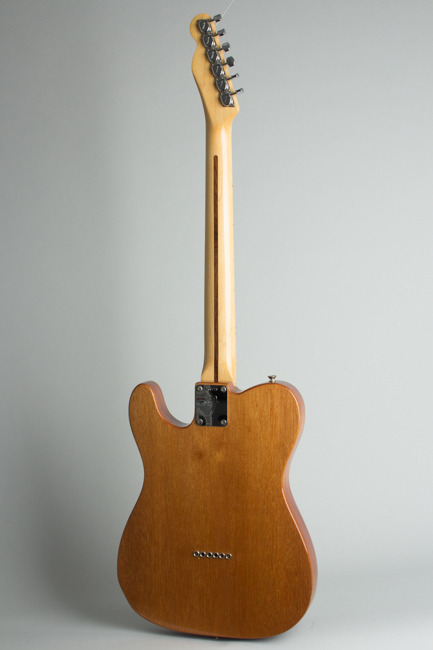 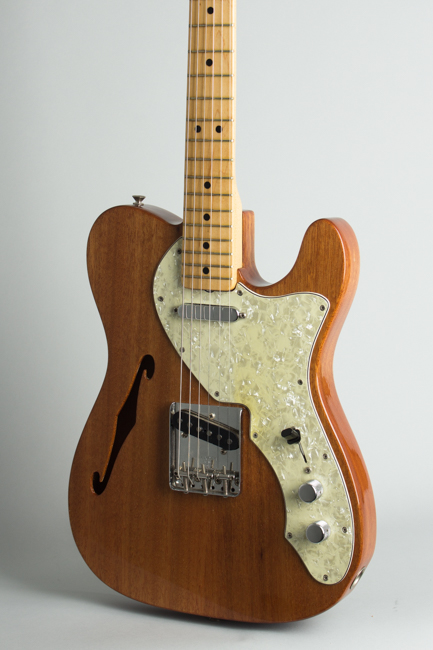 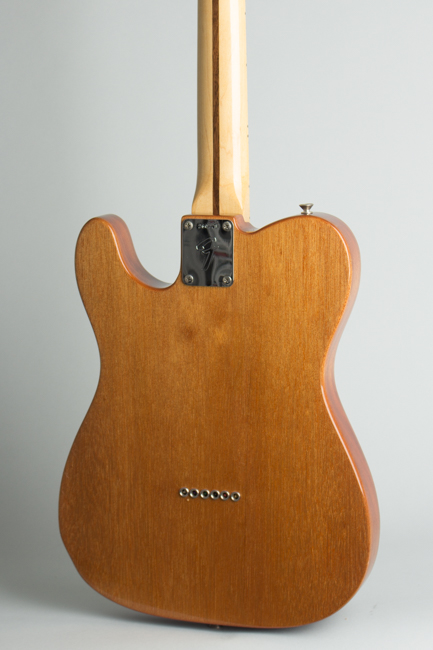 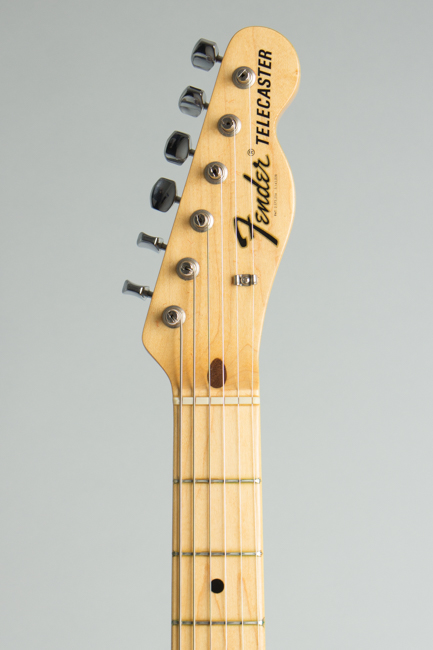 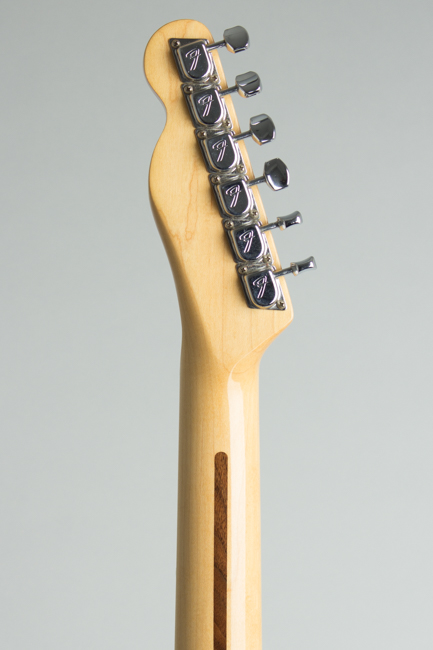 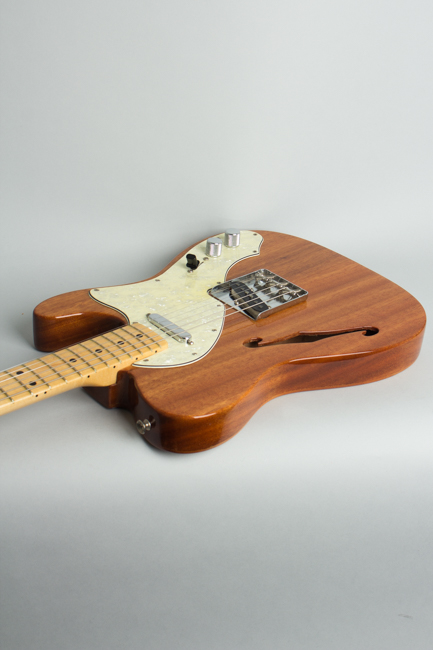 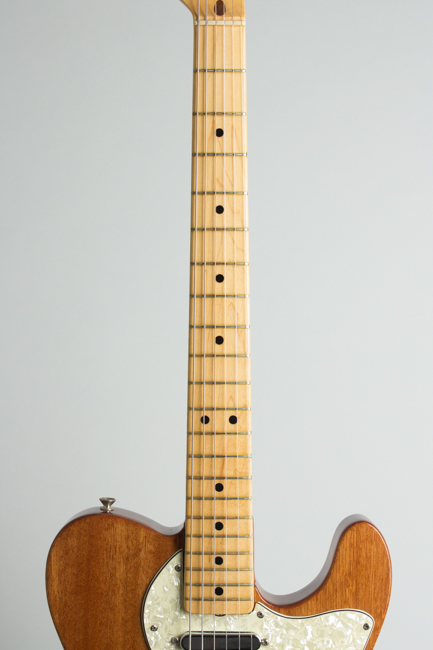 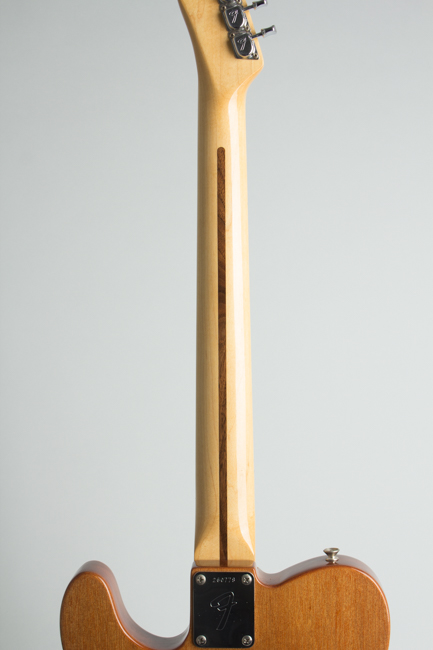 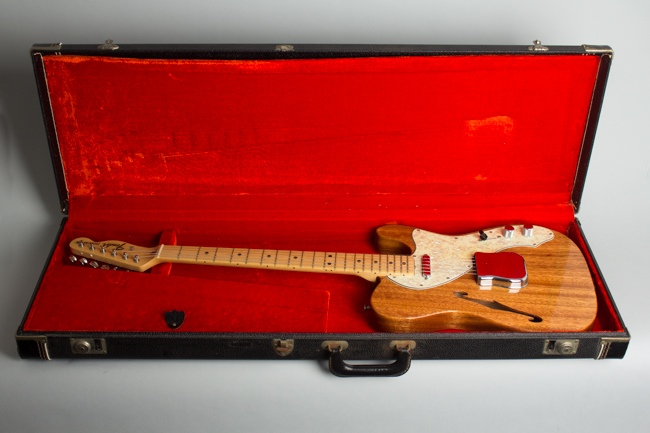 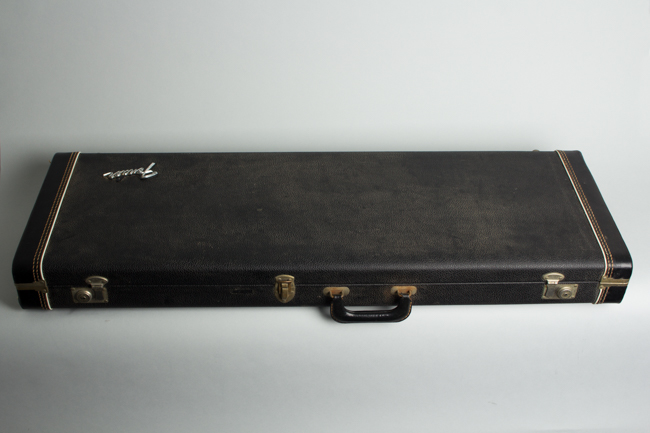 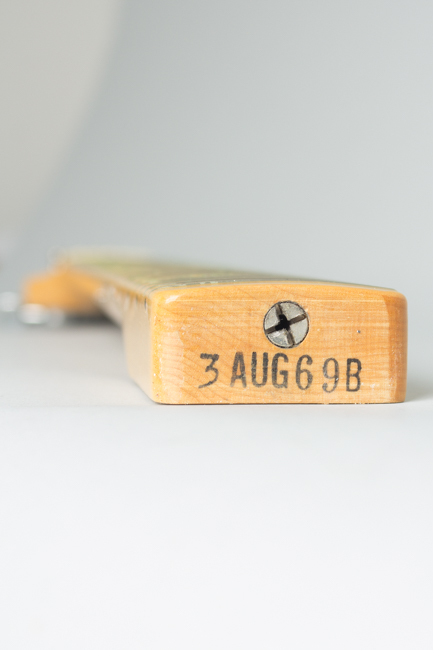 The Thinline Telecaster was one of the best new late '60's Fender concepts, according to legend inspired by dealer complaints about overly heavy guitars from 1965 on! After experimenting with a hidden rout under the pickguard (the so-called "Smuggler's Teles") Fender decided to instead offer a new model where the routing was celebrated instead of hidden. The model was officially introduced in November 1968 as the "Telecaster Thinline" offered in clear finished ash or mahogany, advertised as "Groovy Naturals". This was a sign of the "hippie influence" as CBS/Fender noticed the trend of players in the field stripping their custom color or Sunburst Fenders to the bare wood. The Thinline was subsequently also offered in sunburst or Custom Colors, but these are much rarer.

This semi-hollow Telecaster is built from a block of mahogany like a solid body, hollowed out from the rear not unlike the Rickenbacker instruments designed by Roger Rossmeisel, who was not coincidentally employed by CBS/Fender at the time! A separate back piece was glued on and neatly faired in at the edge, giving the impression of a magically hollowed-out solidbody. The traditional Telecaster pickguard was altered to a more sweeping shape to clear a single upper F-hole and also carry the controls. Other aspects of the traditional Telecaster were retained including the trademark single coil pickups, master tone and volume controls and 3-way lever switch.

This is a stunningly well-preserved example of a mahogany bodied-bodied Thinline from 1969, the first full year of production. The neck is dated August '69 and the pots are from the famous 1966 CBS "truckload" buy, dating to the 17th week of that year. By the end of 1971 the Thinline design was "upgraded" to carry two of the new Fender humbucking pickups which changed its sonic character dramatically. Oddly enough this original 1968-71 version had not proved a major sales success for CBS/Fender despite its nifty and practical design. With only a 3-year production run the Thinline not overly rare but is less common than the standard Telecaster, with mahogany bodied examples being scarcer than ash.

This guitar's featherweight mahogany body has a nice even grain, highlighted by the clear natural finish. One factory grain fill is visible under the poly. The pickguard is the pearloid material that Fender favored on several models in the late '60's. The neck is the single piece maple design re-introduced in 1968, with the clear Poly finish, "F" logo tuners and larger decal typical of the period. The original pickups are fairly bright sounding but still sweet. This is a super cool and fairly rare guitar, an unusually well preserved original example of this sometimes overlooked Fender gem.

This is a two-owner guitar, mostly literally under the bed since 1969. We rarely describe vintage guitars as "near mint" but this Telecaster shows only some very light handling marks and remains absolutely all original and unaltered, complete with the "ashtray" bridge cover. We appear to have been the first ones to (very carefully!) open it up for inspection, and yes every screw was returned to the factory position.

The clear Poly finish shows only some extremely minor disturbances; a small "casewear" dink on the outer side of the cutaway horn and tiny chips on the neck edges where the fret ends have popped through the Poly as it shrank. The pickguard shows only light shrinkage (less than many) and has no strained or split spots by the screwholes. Overall the chrome gleams and the finish shines like it did when "Easy Rider" was on its first theatrical run. The original fretwire shows only some very light wear and slight divoting in the lower positions. The neck pickup cover has a couple of tiny string marks.

The guitar plays and sounds great, with the typically twangy 1970's Tele tone given an airy quality just a bit by the light hollow mahogany body. It has more bass response than many '69 Teles, and can sound quite sweet. This is a genuine "Time Capsule" guitar; even late '60s Fender instruments rarely turn up in this sort of barely-used condition anymore. The original red-lined "no-tail" logo Fender HSC has some dirt and minor external wear from being moved around over 50+ years (there is one chip to the plastic logo) but is still very nice overall.

The pocket contains a cool selection of original "Case Candy" including the 1960's logo-buckle skinny black leather strap (that appears practically unused) several mint 1969 era Fender string packets (a couple with strings), the Fender polish cloth (that was well used) and the rarest bit, a Fender-branded vinyl luggage tag that is also mint unused. There is also the Fender "Tolex" hangtag for the case, a period Sam Goody Celluloid pick and a theatrical ticket envelope from the Algonquin hotel, where the original owner reportedly performed as a magician! This prime package is a close as most of us will get to riding back to the fall of 1969 to pick up a new Tele, which is a magic trick we'd all love to master! Near Mint Condition.
×