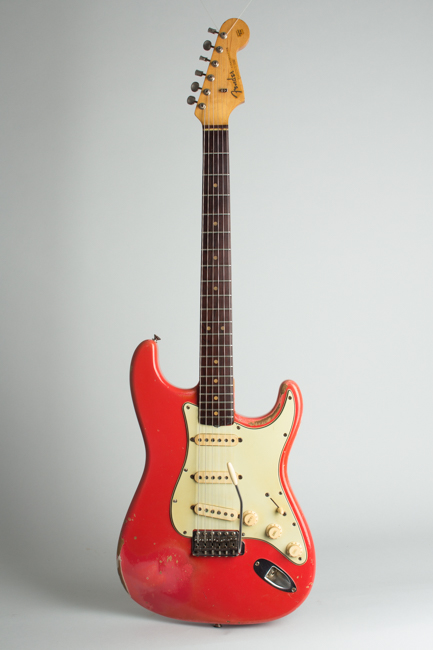 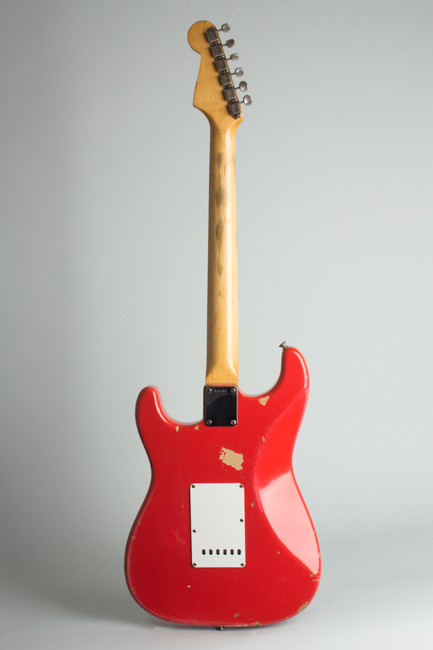 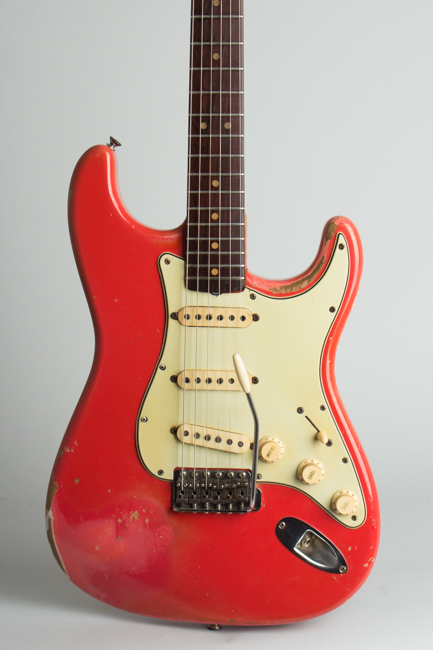 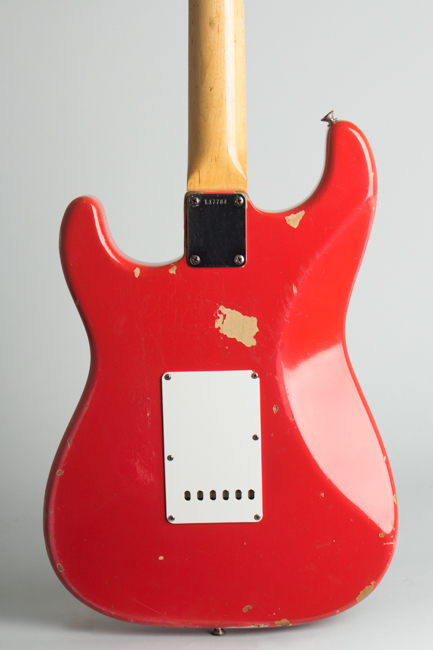 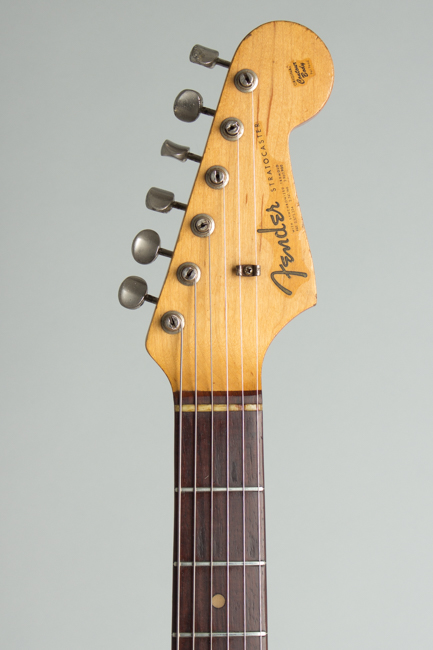 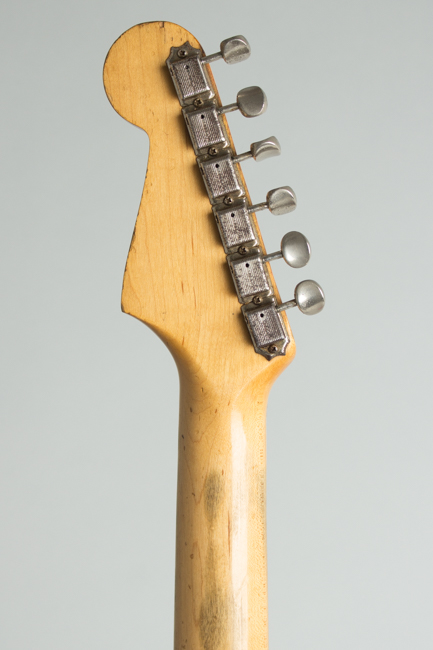 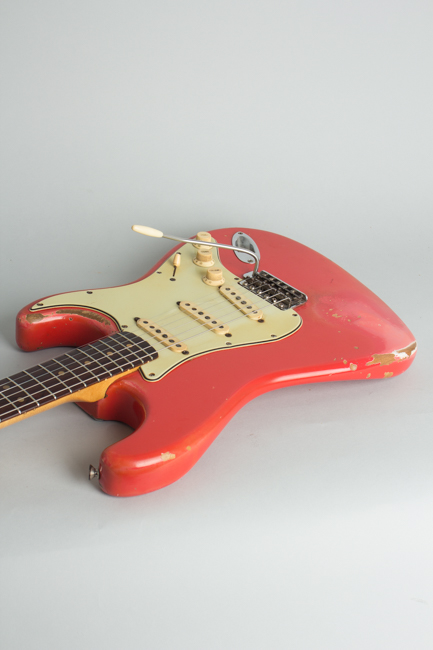 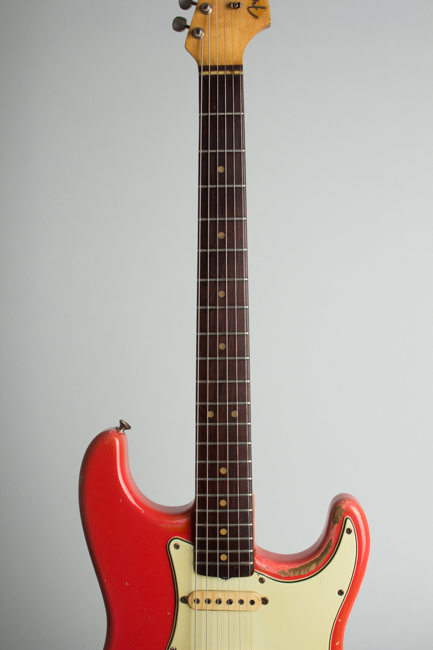 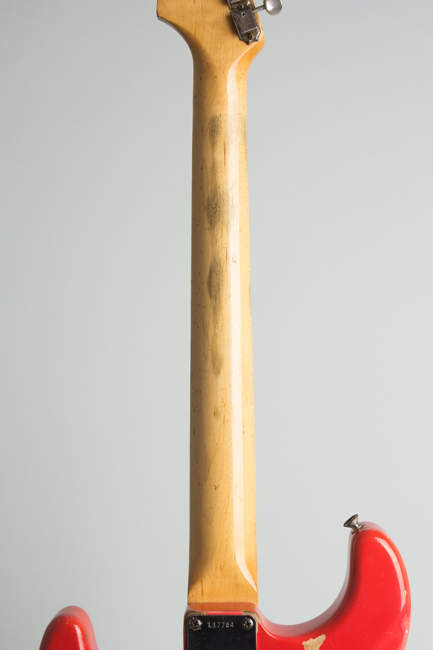 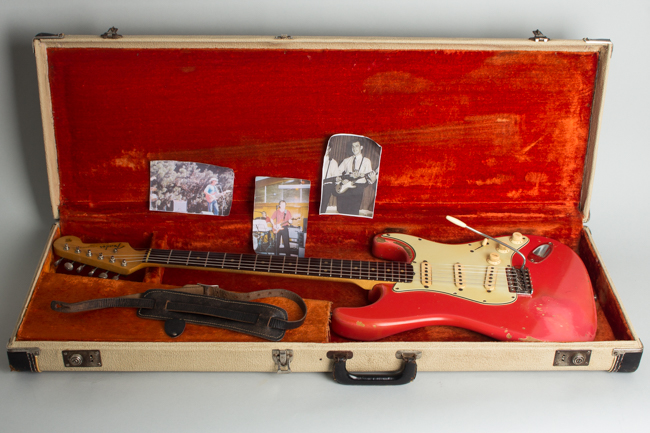 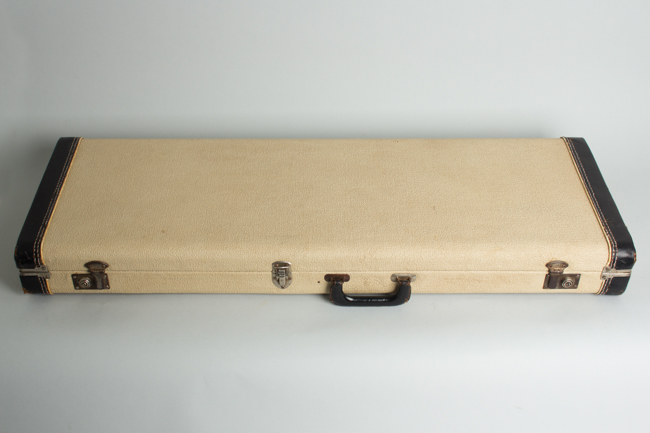 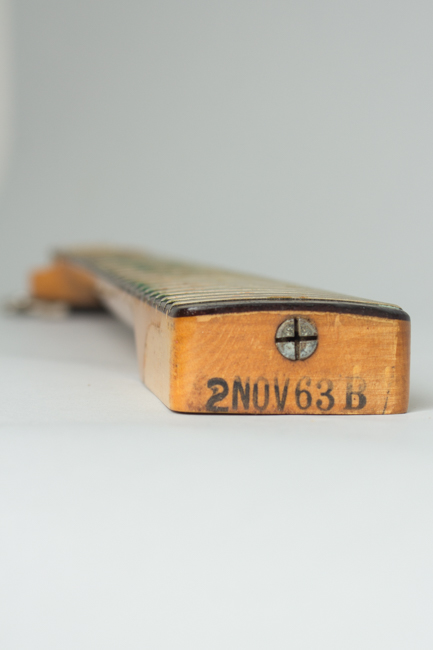 This is a truly beautiful if well worn and weathered example of a solidly Pre-CBS Custom-Color Stratocaster, played extensively but not abused or altered. While not the rarest, Fiesta Red is in many ways the classic solid-color Stratocaster finish. It was one of the earliest non-standard colors Fender began offering in the '50's and the exuberant hue seemed to particularly suit the futuristic Stratocaster. Certainly among an entire generation of English players from the 1960s the red Strat was the ultimate object of desire, courtesy of Hank Marvin of the Shadows. In the US Festa Red was simply one of the more popular Fender colors, but still retains an iconic appeal.

This original Fiesta Red Stratocaster would have been assembled right around the beginning of 1964, with typical appointments for the period. The rosewood-faced neck is ink stamped 2 NOV 63 B on the heel, indicating a fabrication date of the 11th month of 1963 with the standard "B" nut width. Visible date codes on the potentiometers indicate the volume pot was made the 51st week of 1963 while the two tone pots are stamped 6403 dating to January 1964. The neckplate carries a fairly early L series number, again typical of this period.

The neck sports the Pre-CBS style small headstock with the old 1950's "spaghetti" gold logo decal that would soon be replaced with the bolder "transition" style. The thin-lam rosewood fingerboard has the "clay" dot inlay that would also be phased out at the end of 1964. The pickguard is lovely greenish nitrocellulose, another classic fender feature that would disappear around the turn of 1965 replaced by plainer white plastic. This great sounding Strat has all these now-classic Pre-CBS touches, built about a year before "things started a-changin" in Fullerton after the January 1965 sell-out to CBS.

The guitar still retains the original Fiesta Red finish which shows a some fairly heavy play wear has not been touched up or oversprayed. These 1960s pastel finished bodies were generally not as heavily clear coated as the metallic colors and often retain a better hue; this one still shines despite the decades of use. They also do not wear as well, and many examples as worn as this were stripped and refinished in the 1970s and '80s before the "relic" look became an object of desire in itself. This Strat is a fine unmolested example of the high summer of Fender, played for decades and still as fine an instrument as ever with the slightly darker but still ringing voice typical of these late Pre-CBS examples.

As noted this guitar has a lot of play wear overall but remains in nicely original condition. The red lacquer has some checking and many small dings and dents overall, with several large swaths of wear. The armwear area on the upper face is worn through to the pinker undercoats, sweated through somewhat and down to the wood on the upper edge. The lower cutaway horn is worn into the wood on its outer edge from what looks like enthusiastic strumming over the years. The sides and back have areas where the lacquer is worn and chipped through to the wood, and the area by the heel is somewhat worn down. The entire guitar has a fantastic "Natural relic" look that is often artificially re-created today.

All of the hardware remains original with possible a couple of small exceptions. The pickups, pots, covers, switch, and wiring are original; the solder joints appear unmolested and most of the masking tape on the wires is still intact, if ossified. The lovely "Green" nitrocellulose pickguard is original and in good shape for the period, slightly shrunken overall but with no cracks at the screw holes. This 'guard shows less shrinkage than many; all pickguard screws are original. The pickup covers and knobs have ambered nicely and show some wear, again the kind of thing often "relic-ed" on purpose today.

The tremolo bridge unit and saddles are original; the saddle adjustment screws appear correct but may be of somewhat later vintage as they show hardly any corrosion. The steel saddles do show typical wear and corrosion and the baseplate has minor bubbling to the chrome. The trem is set up with four springs, the coverplate is original with one corner cracked off. The arm appears original or at least older; it appears less worn than the rest of the bridge but may not have been mounted for much of the instruments playing career.

The fretwire is the original style and are crowned down a bit flatter than stock but still have decent height and are quite playable. This looks to be a very old refret; the fingerboard has been trued and there is one tiny rosewood fill on the board by the first fret. The bone nut is still original. The back of the neck has some wear down to the wood but a decent amount of the original finish is still intact. The original Kluson tuners have some corrosion on the casings and the decal is somewhat darkened but very well preserved.

This is simply one of the coolest looking and finest sounding 1960s Stratocasters we have had. It has a fantastic patina showing the effects of decades of use and the natural wear from that history, yet still plays as expected and handles effortlessly. At 7.8 Lbs. it is medium-weight for this era, and lighter than many later Strats. It is housed in an original white Tolex Fender case that once held a Telecaster but is correct and remains quite functional. There are several color Xeroxes of what is apparently the original owner using the guitar from the 1960s into the 1980s in the pocket. Overall Very Good + Condition.
×