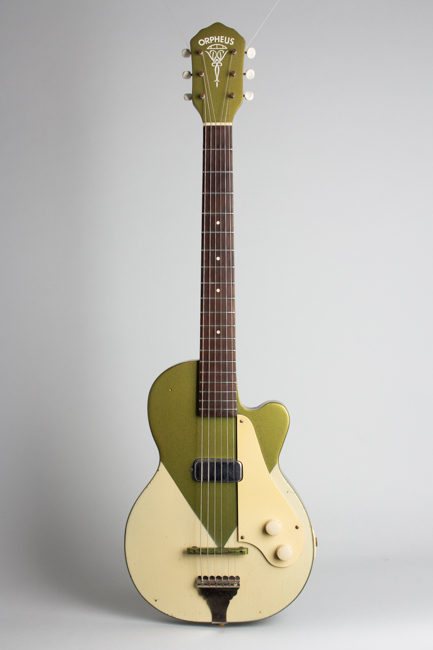 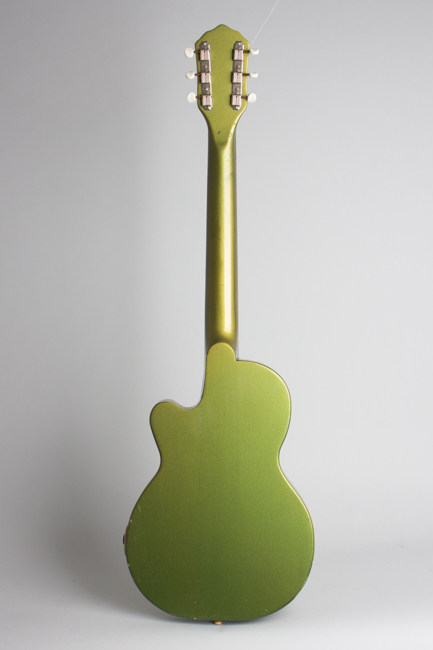 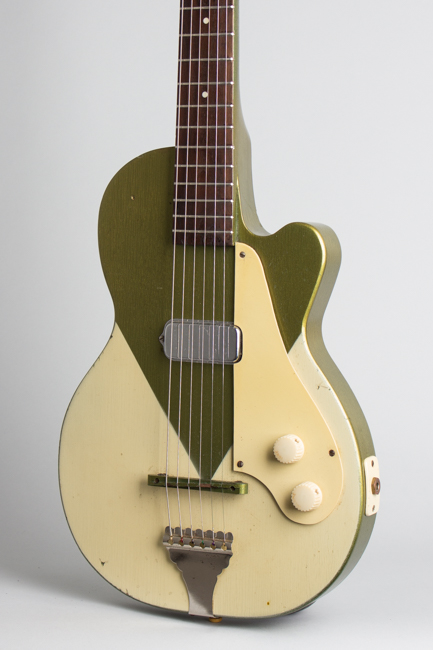 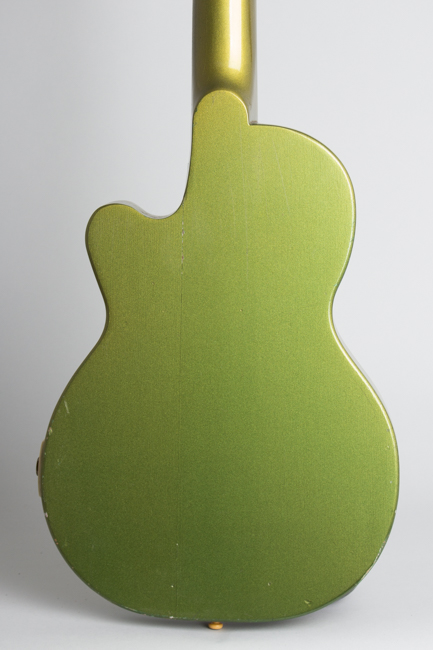 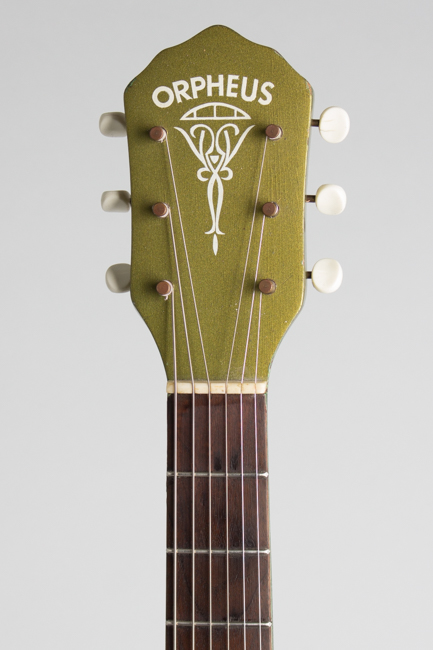 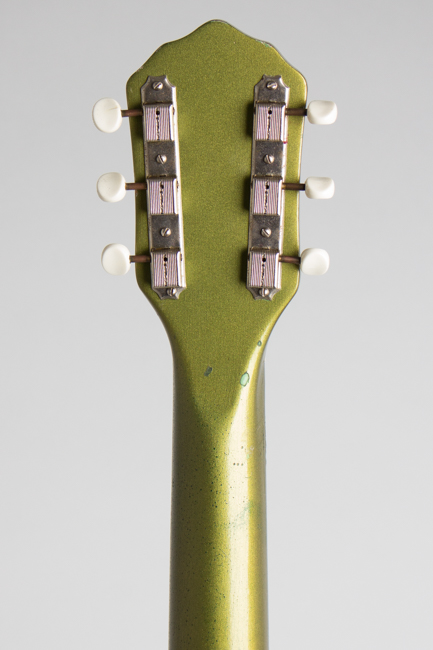 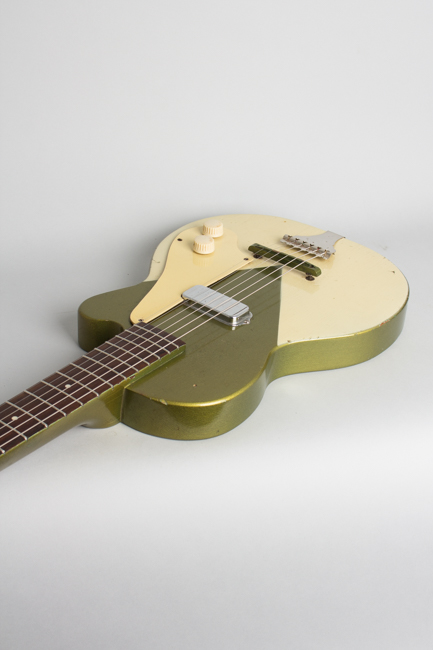 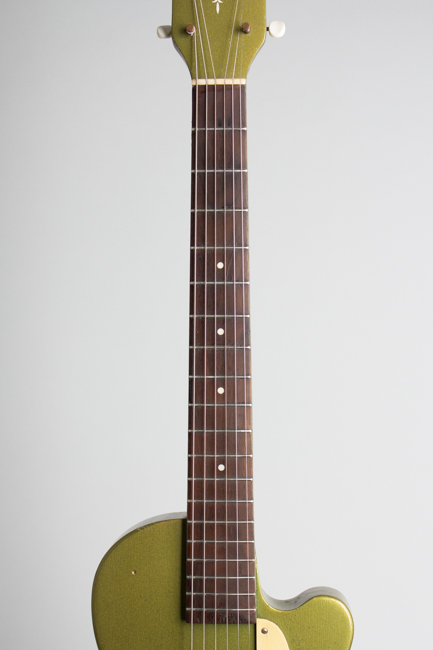 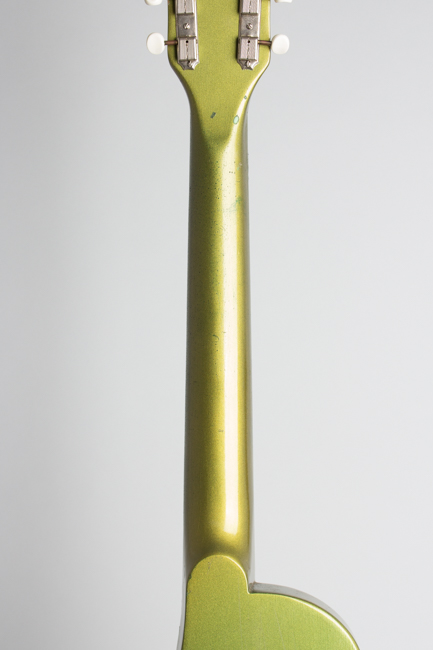 This festive looking guitar is a jobber-branded version of the primal Kay solidbody, the K-136. This later '50s iteration of this Chicago-made electric slab-o-wood was made around 1957. While we can't date it exactly as the pot codes soldered over, it matches the version shown in Kay's 1957 catalog at a list price $73.00. The only difference is on the headstock it carries the "Orpheus" brand which belonged to Coast Wholesale in California during the 1960's, not to be confused with the Orpheum brand used in New York by Maurice Lipsky.

This is a very early solidbody design, and despite its relative obscurity an innovative one as well. Jumping into the new early '50's solidbody market Chicago competitors Kay and Harmony hit on generally similar designs, both somewhat inspired by Gibson's Les Paul. These were both more compact and simple instruments with small single cutaway bodies and integral full-length thru-body necks, something Rickenbacker usually gets the credit for pioneering. While Harmony's Stratotone is better remembered (the power of a catchy name?) Kay's K-136 is in some ways a better designed guitar.

The most notable feature of the K-136 is the neck-it is VERY chunky with a beefy round profile that gets much deeper towards the body and a thick rosewood fingerboard. The body is flat topped, deeper than the Harmony with less rounded edges giving it a chunkier feel. The entire guitar is finished in a very eye-catching two-tone metallic green and cream white lacquer, with a dramatic "V" motif on the body. This is topped off with a cream plastic pickguard, inexplicably raised with grommets off the body similar to Rickenbacker practice.

There is one single-coil pickup mounted solidly to the top under a chrome cover, positioned close to the center of the body controlled by standard tone and volume pots with cream-colored knobs. The one-piece rosewood bridge is painted green to match the body. It is mounted on studs and is adjustable for height (an advantage the Stratotone does not offer) mated to a standard short trapeze tailpiece.

The tone is fairly raunchy but a bit less "presency" than the H-44, due to the different pickup design and placement. Guitarists often joke about "baseball bat" necks, but this one REALLY does feel like a vintage Louisville slugger, thinner at the nut then getting massively thicker approaching the body. While this does not play like a '50's Les Paul, the instrument is otherwise quite handy. As these early Chicago-made early solidbodies go this is a quite usable example very appropriate especially for period Chicago blues and early rock'n'roll sounds. While perhaps not to every taste, all in all the K-136 is a fun early solidbody with a cool period vibe.

This guitar is a very nice example of this rare Kay variant, showing just some general light wear. The two-tone metallic finish has small dings, rubs and dents but has not faded extensively and has no large areas worn away. There is a visible seam where the lower body wing attaches to the center neck/body piece but no open crack, the instrument is completely solid. The neck is nice and straight; there is no truss rod but more than enough wood!

The instrument remains all original except for a refret with period style small wire; the original brass frets on most Kays from this era are usually pretty poor so this is practically a requirement to be playable to any modern standard. As a result this is a fine player, as good as these primal solidbodies get anyway. The neck angle is excellent (especially compared to the similar Harmony H-44) and the bridge has plenty of room to adjust up or down as desired. It is housed in a '70s hard case that actually fits quite well, just a bit longer in the neck area than needed. Excellent - Condition.
×