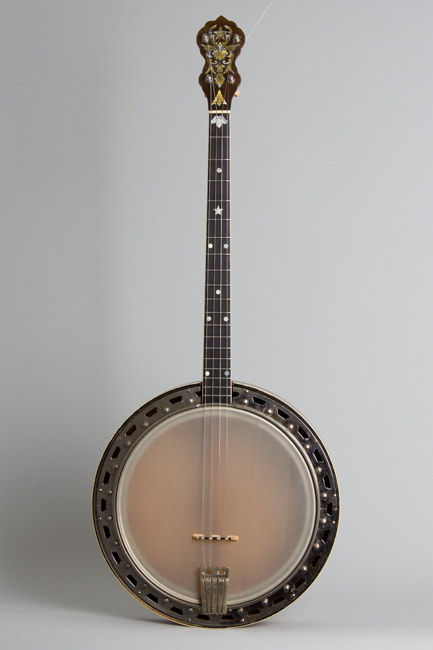 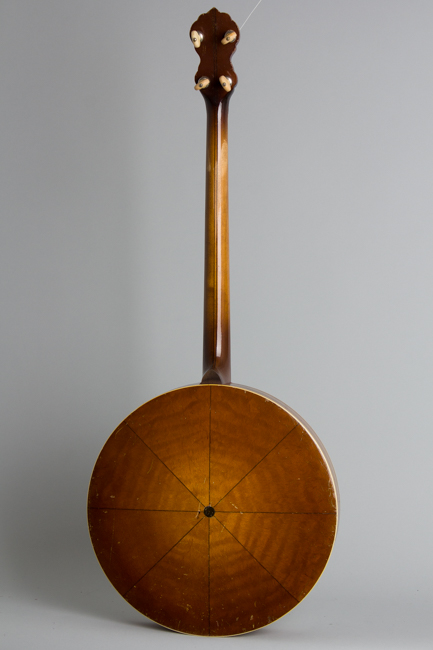 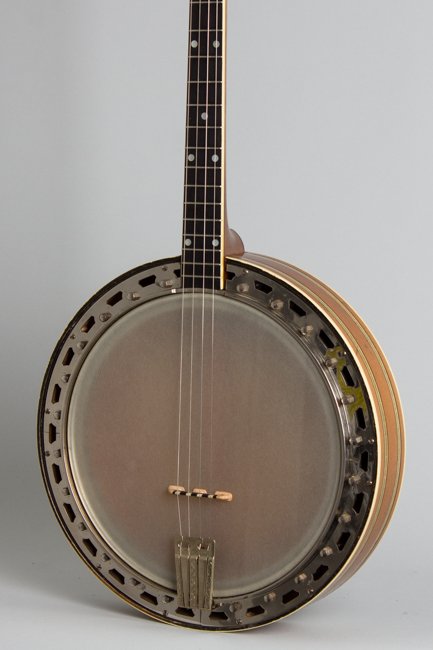 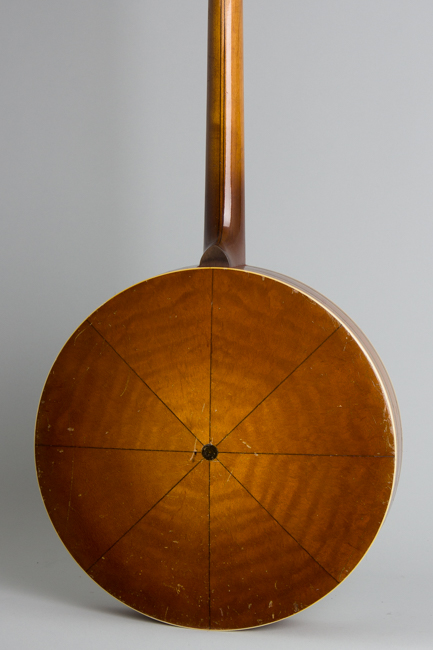 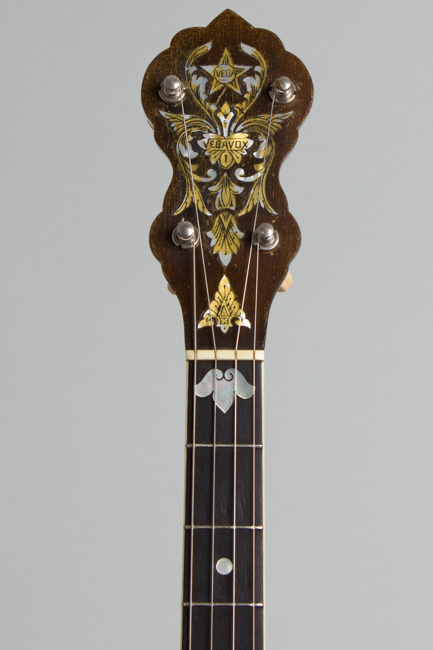 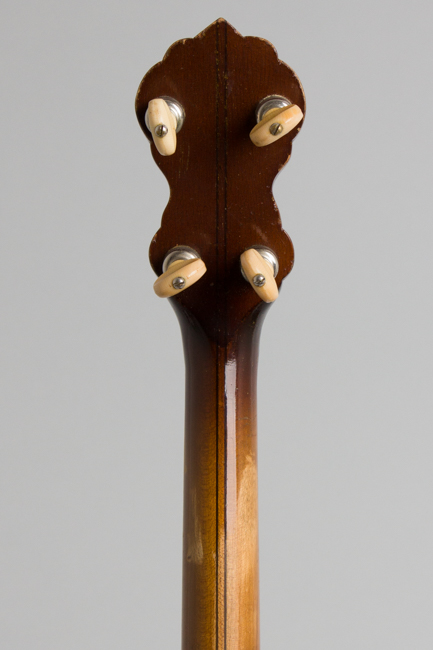 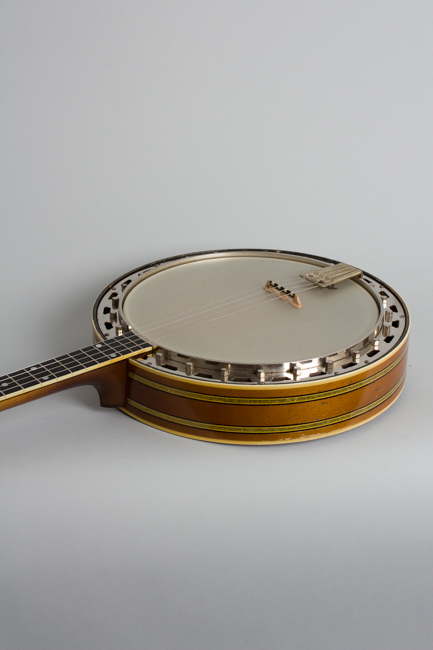 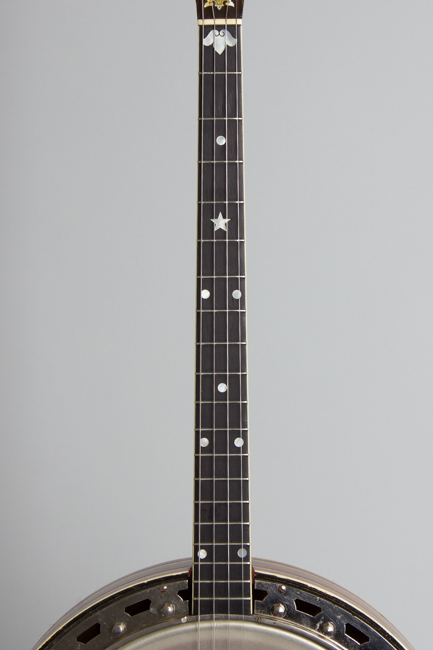 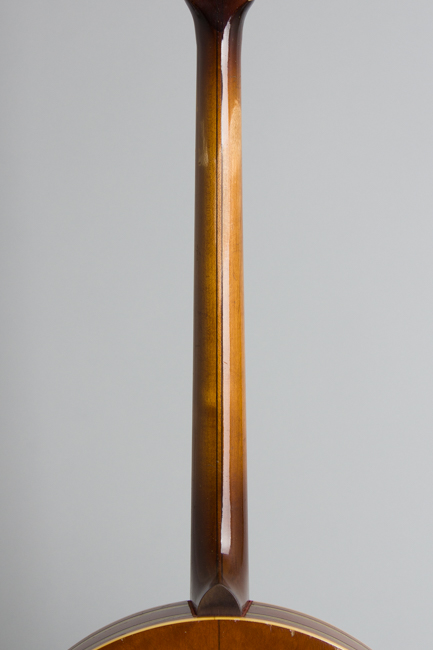 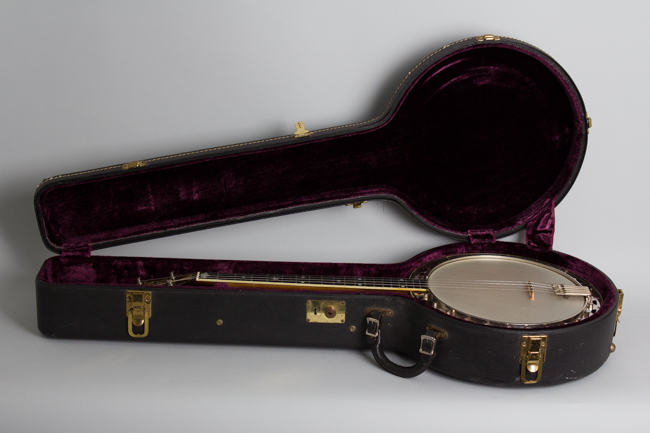 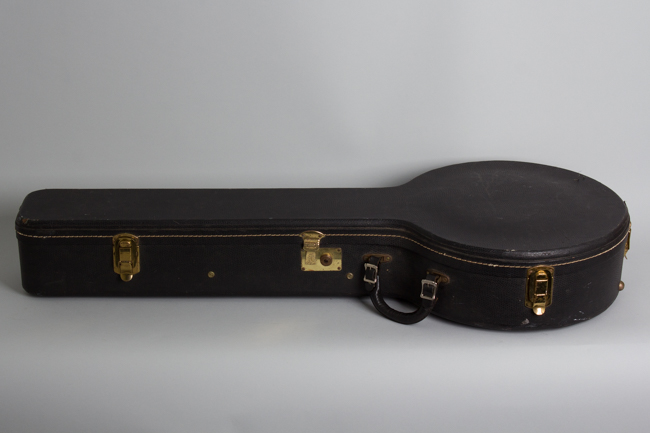 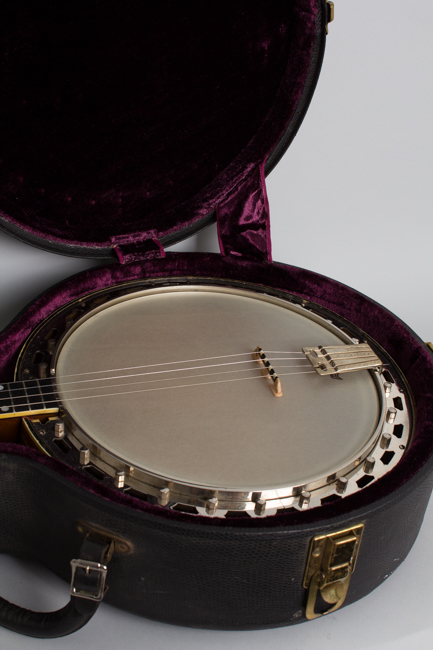 This fairly early Vegavox I is a nice example of Vega's ultimate development of the 4-string banjo family, which remains one of the most sought-after of the breed. The Vegavox line appeared at the end of the 1920s, when interest in the tenor banjo was already starting to wane. With their industry-standard Vegaphone line Vega was arguably the most successful banjo maker of the era, and they weren't going down without a fight!

Developed with input from plectrum virtuoso Eddie Peabody, the Vegavox used the same rim design as the earlier Tubaphone mounted completely submerged in a very deep resonator. This totally enclosed the entire rim with the flange mounted just under the head. The tension nuts are adjusted from the top, a design pioneered earlier by Leedy and Ludwig and eventually adopted by Gibson in the 1930s.

The Vegavox line were exclusively marketed as high-end professional banjos. This Vox 1 was the simplest model of four styles offered but is still a rather fancy instrument. The fingerboard inlay is similar to the earlier Vegaphone Professional, while the elaborate pearl headstock pattern is more like the high-end Artist model. The deep-dish resonator is finished in Vega's subtle shaded maple, with a pie-section back and two thick inlaid lines of celluloid and gold sparkle inlay on the sides. The top-tension nuts and flange are chrome-plated.

The sound is very powerful with a deeper dimension than most tenor banjos. Many players who worked as soloists or with small combos came to prefer the Vegavox to any other tenors and Plectrums and Vega continued to make them -- in very small numbers -- up into the late 1960s. This is a lovely early-pattern Vox 1 example and still an exceptionally fine tenor banjo for any application.

Overall length is 33 3/4 in. (85.7 cm.), 11 in. (27.9 cm.) diameter head, and 3 1/4 in. (8.2 cm.) in depth, measured at side of rim. Scale length is 23 in. (584 mm.). Width of nut is 1 1/8 in. (29 mm.).
This banjo shows signs of a long playing career, but no abuse or notable repair. There is some moderate wear overall, but the only alteration is a lovely handmade repro tailpiece; the originals often have failed from metal fatigue by now so this is a not-uncommon find. There is wear to the finish on the back of the neck down to the wood from play, and dings and chips to the resonator sides and back. The chrome has some tarnish but no major loss.

The original frets and ebony fingerboard also show some wear, but the instrument still plays very well with the expected superlative sound. The banjo is set up with a recent frosted head and later bridge. This is a very nice original period example of this fairly rare and much-lauded tenor banjo, still a player's favorite today. It is housed in a later 1960's era Vega HSC sized for a plectrum/5-string length neck, but otherwise a good fit. Very Good + Condition.
×