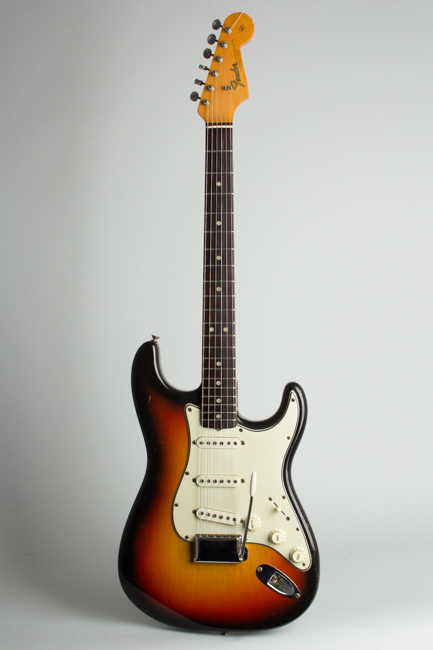 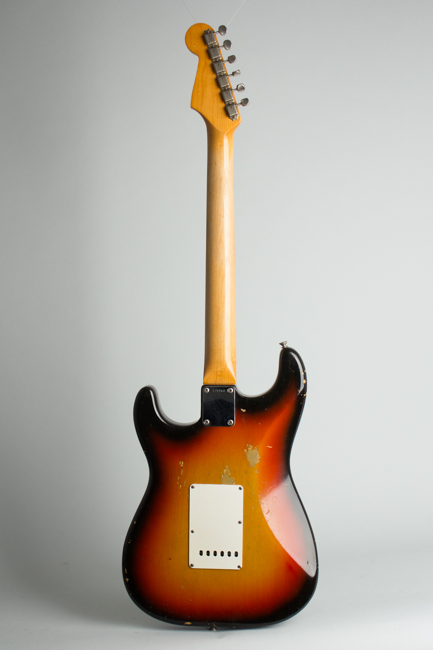 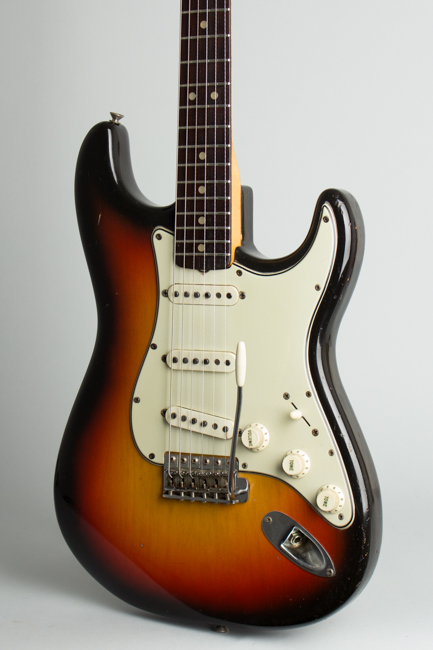 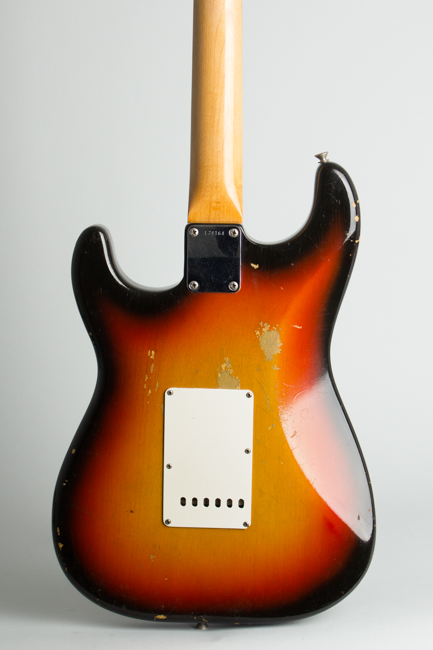 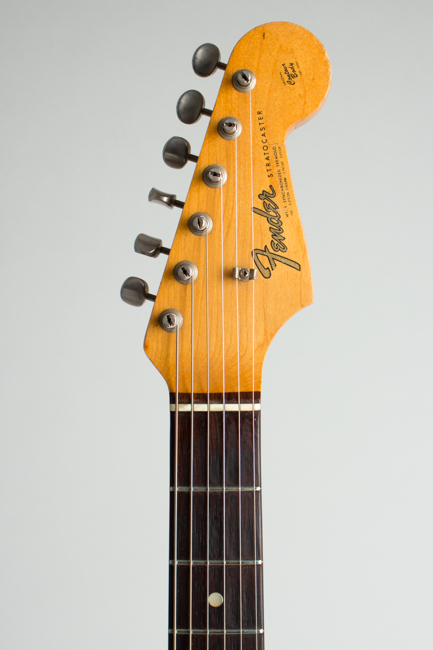 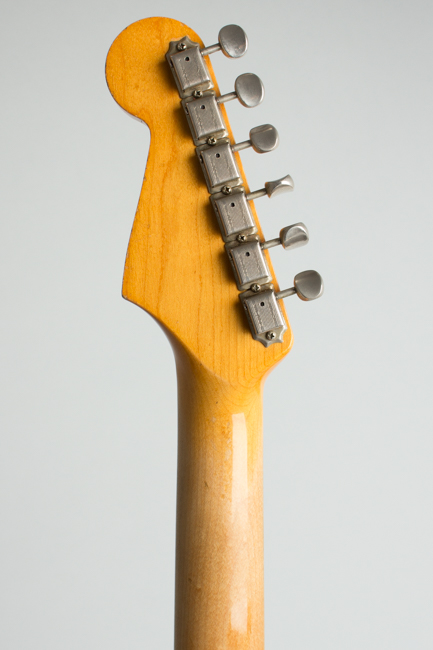 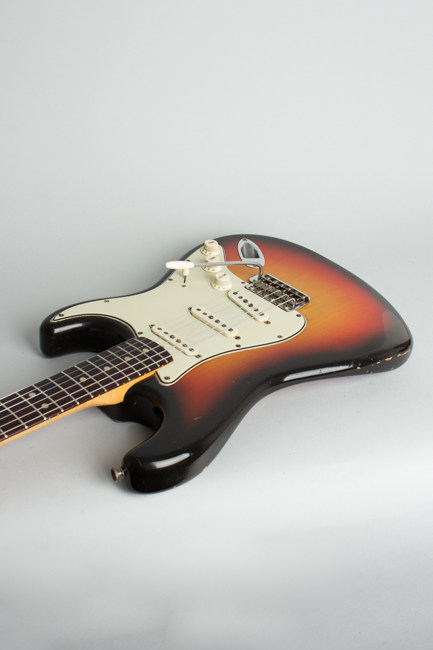 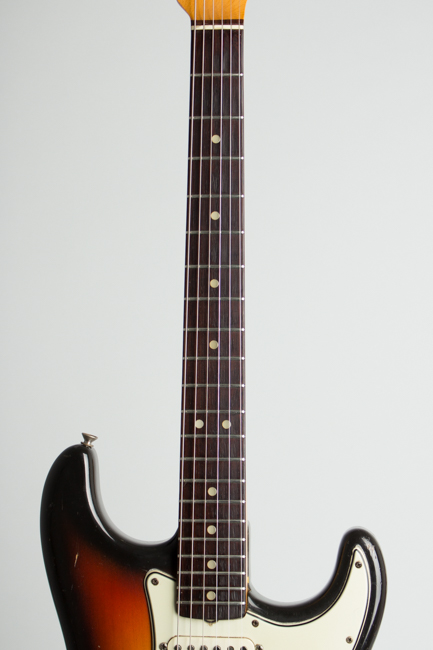 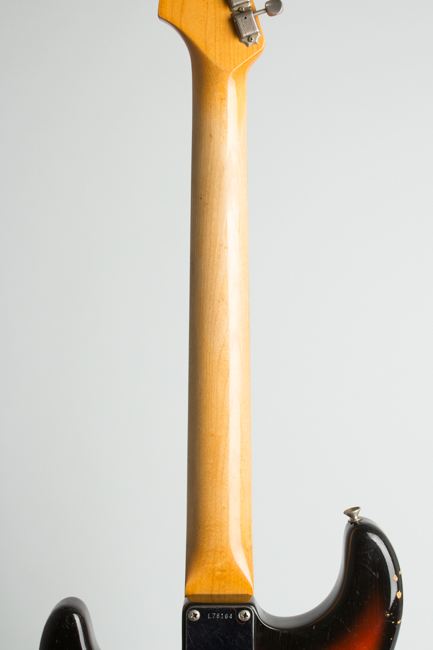 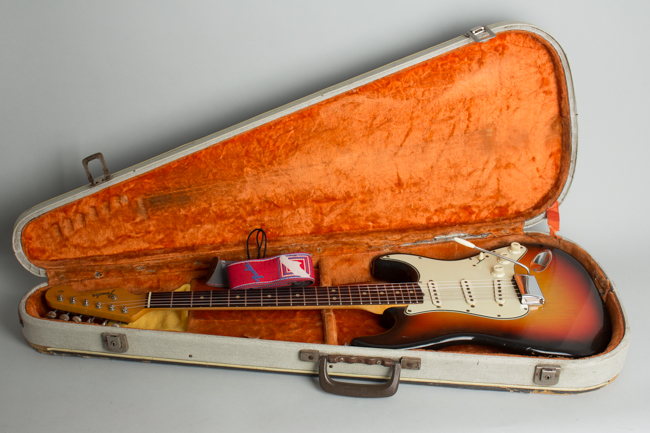 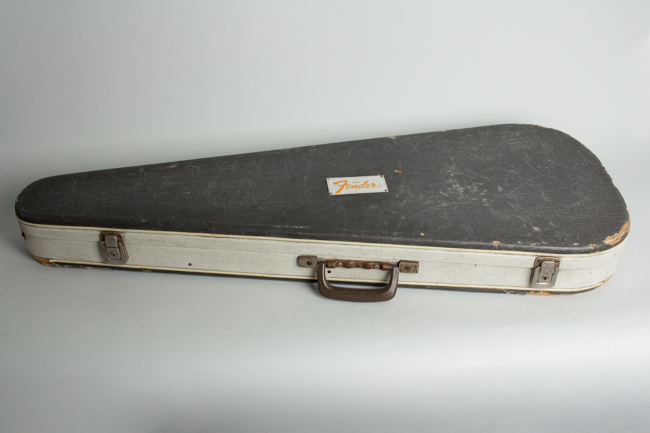 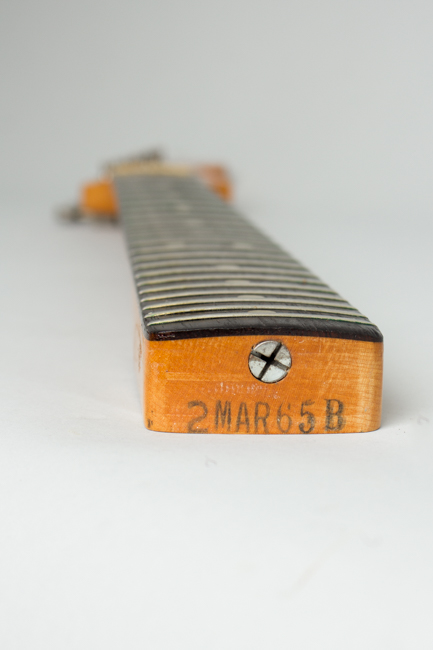 This is a lovely example of a JUST-CBS era Stratocaster, played in but not altered or abused. This guitar was assembled in the first 6 months or so after Leo's company was old to the giant corporation and shows typical "transition" features seen right at this time, mixing the old with the new. The neck is dated March 1965, the pickups a matched set hand-dated 6-16-65 and the pots to the 16th week of that year. It was likely shipped in the summer of '65, right at the very peak of the guitar boom of the 1960s. It was most likely originally sent to a European dealer; more on that in a moment!

The headstock sports the old pre-CBS small headstock with the newer gold "transition" logo that appeared in mid-1964. The thin-lam rosewood fingerboard has the pearloid dot inlay that was just coming in at the end of 1964, replacing the older "clay" dots. All other hardware is still in the pre-CBS mode including the Kluson Deluxe tuners.

The sunburst finish on the body follows the trend towards the more quickly sprayed "bull's-eye" bursts that would become the norm as 1965 rolled into '66, but is not as sharply demarcated as some with a subtler blending of the shades. The pickguard is a glorious example of the "green" nitrocellulose piece that had begun to be phased out at the turn of 1964-5, replaced by less romantic coldly white ABS plastic. This is one of the latest assembled Stratocasters we have seen with this much-loved fitting.

This is a great-sounding, medium weight resonant Strat built just before "things started a-changin" in Fullerton as a consequence of the January 1965 sell-out to CBS. All three pickups have the typical mid-60s sheen, powerful and crisp without being excessively bright. This is a lovely unmolested product of the high summer of Fender, housed in a very interesting case with its own story.

The guitar resides in the vary rare (in the US anyway) Italian issue Fender case. Different importers around the world sold Fender instruments in the 1960's but many provided their own cases as the expensive (and heavy!) Tolex cases from Fullerton were very costly to ship. This case is a two-tone version of the typical Eko-made Vox cases, with a metal plate pinned to the top announcing "For Fender". We don't know how many continents this Strat has traversed since 1965 but we're happy to have it back home, still rockin' in the USA after 55+ years.

Overall length is 39 3/4 in. (101 cm.), 12 3/4 in. (32.4 cm.) wide at lower bout, and 1 3/4 in. (4.4 cm.) deep. Scale length is 25 1/2 in. (648 mm.). Width of nut is 1 5/8 in. (41 mm.).
This Stratocaster shows typical signs of use but remains in fabulously original condition, with no repairs or notable alterations. The lacquer on the body shows dings, chips, and scrapes overall, most noticeable on to the edges. There is more wear to the back than face, with a couple of patches of buckle wear through the lacquer and numerous dings and dents. The finish on the back of the neck is beautifully worn down, with that perfectly played-in feel so beloved in old lacquer-finish Fender necks.

Internally the guitar remains completely original with untouched solder joints and the masking tape wire holders fully intact. The original frets have noticeable wear in the lower positions still have life left in them and the guitar plays very well. The 3-color sunburst has virtually no fade and very little checking. This guitar has been played and loved but not abused, and is ready for the next 50+ years. The Export case is still intact and functional with some fairly heavy wear and loss to the ends, and a replaced handle that looks like it was done very early on. Excellent - Condition.
×