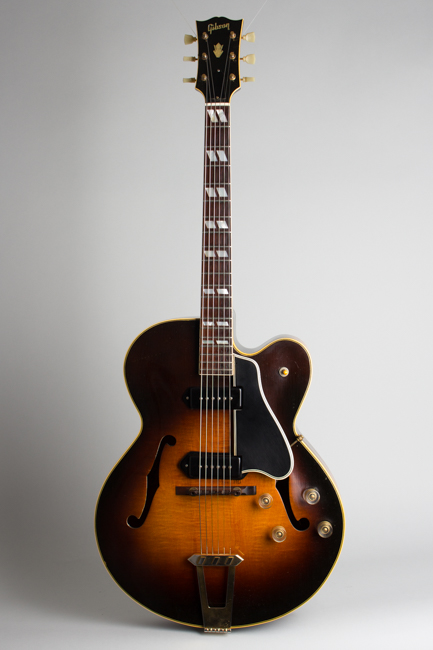 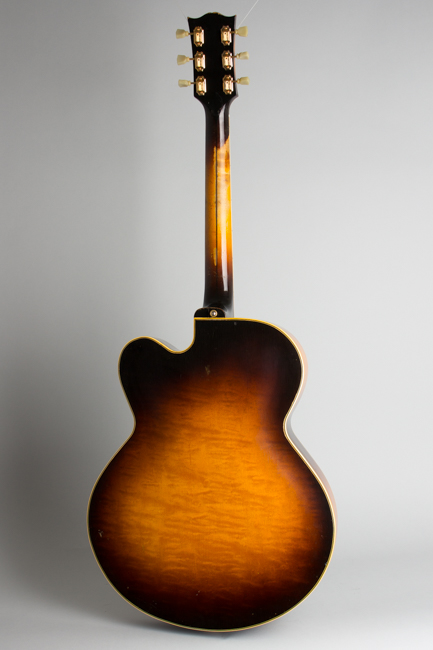 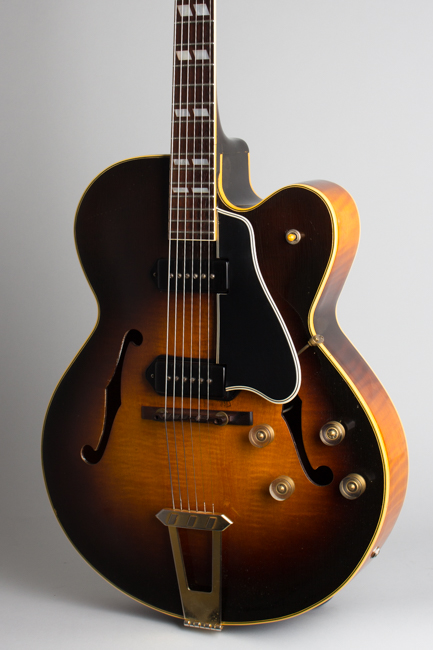 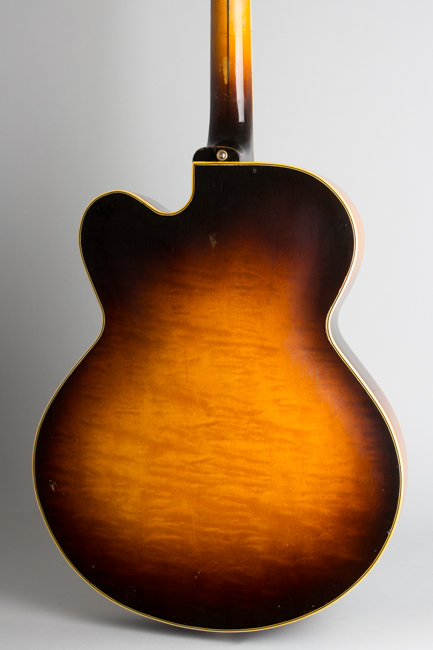 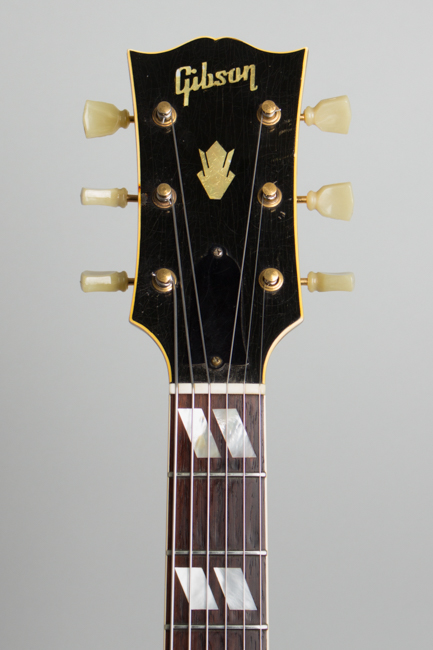 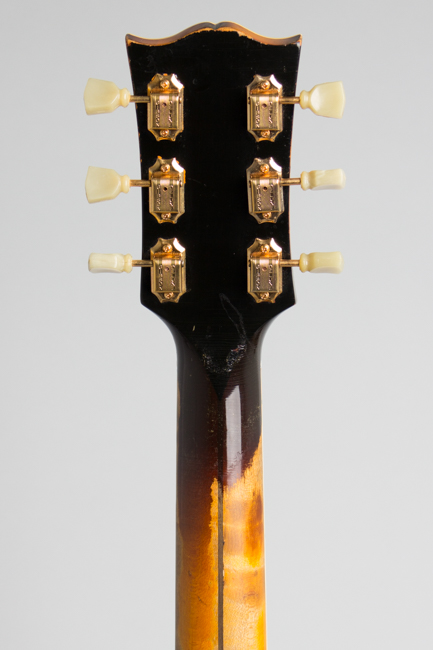 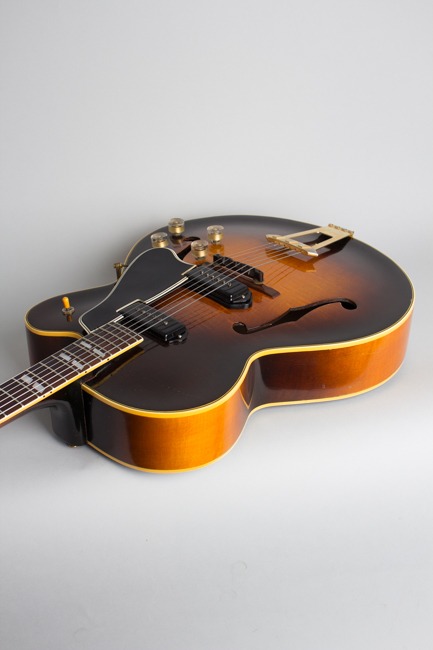 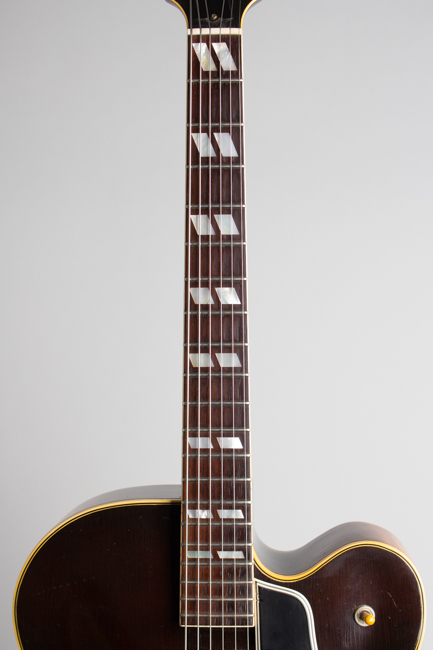 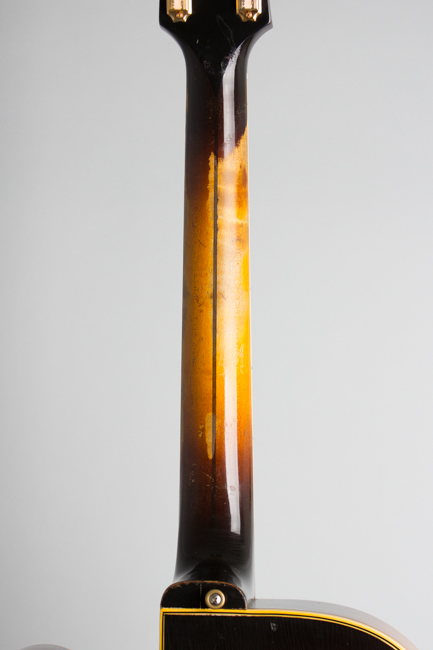 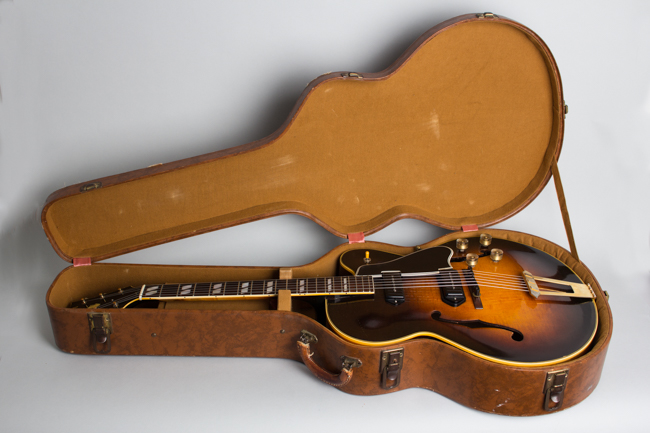 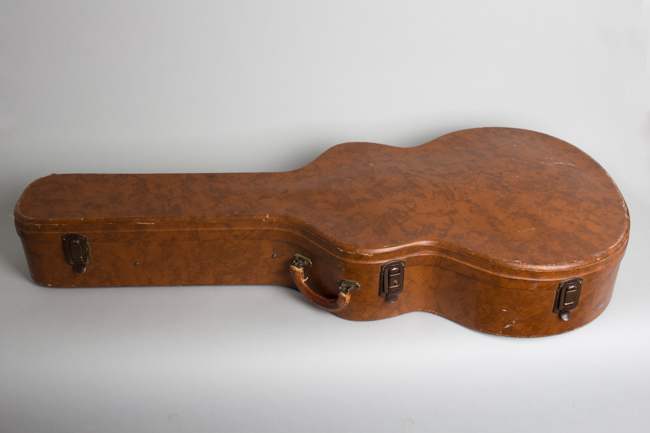 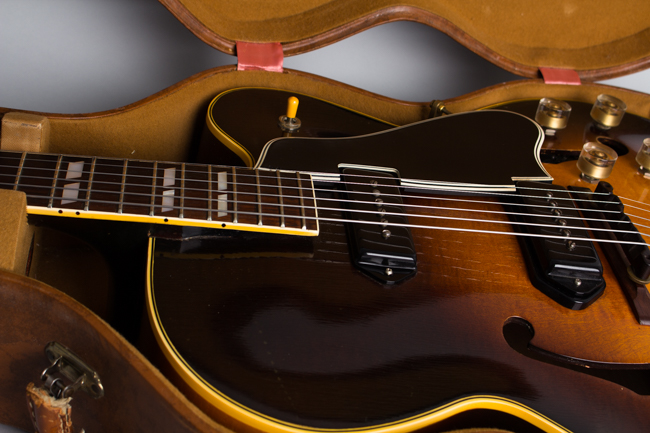 This is a very cool example of a 1949 Gibson ES-350, one of the true classic hollowbody electric guitars of the period and the template for many to follow. This particular guitar was shipped early July 1949 but was re-wired early on (possibly by Gibson, or at a Gibson dealer as the work looks factory) to the standard 1952 and later wiring scheme with four knobs with a selector switch. As built, it would have had two volumes on the lower rim with a master tone control on the cutaway bout.

This guitar mounts two black covered P-90 pickups which are original; only the wiring rig was updated. The four control pots are fitted with 5/8" high barrel knobs, amber plastic without numbers as used by Gibson from 1949 through early 1953. This is another indication it was an early authorized re-work! The pots and wire are period, as is the switch. The tone cap on the lower control is typical 1940's wax covered cap, while the upper one is plastic consistent with the early/mid '50s.

The other features of the guitar remain as built. The ES-350 is a 17" fully hollow, laminated maple guitar that occupied the spot in the 1950's Gibson line between the mid-line 16" ES-175 and the flashy three-pickup ES-5. Up until mid-1949 it was actually the top of the electric line until the ES-5 appeared that summer. This was also the first year for the double pickup ES-350 which in the 1950's became a favorite of several top jazz players. In this configuration it is mostly associated with Tal Farlow, who used one for much of the decade, live and on his most famous recordings.

The ES-350 is a fairly fancy guitar, not flashy but with an overriding elegance. The triple-bound laminated maple body has a single rounded cutaway and two f-holes, with a deep amber sunburst showcasing some very attractive tiger maple, especially on the back. All hardware is gold plated. The L-7 style hinged trapeze tailpiece has pointed ends and three raised parallelograms. The pickguard is five-ply laminated plastic (b/w/b/w/b) with a beveled edge.

The maple neck is a three piece laminate, the center element being a narrow black stripe. The rosewood fretboard is single bound and inlaid with double pearloid parallelograms. The headstock is single bound with a mother-of-pearl crown inlaid in the peghead overlay. The Kluson Deluxe tuners have plastic "tulip" single ring buttons. The tuners and tailpiece on this guitar are the exact correct style but date to the 1970s. Even with the alterations this is a superb and exactly correct-looking instrument, and a great sounding and playing one at that!

This is a very sharp looking guitar, with some light wear here and there but generally very well preserved for its 70+ years on Earth. The finish shows typical checking and some dings, dents and scuffs. The only large area of loss is to the back of the neck, which is down to the wood from play over some of its length. There is one sealed laminate crack just above the jack on the rim, solid but visible and not over finished. All finish on the guitar is original and the patina is fantastic, with that classic Gibson "glow".

As noted the hardware is a bit of a mixed bag, all the correct style but not all original to the guitar. The P-90 pickups and their early style narrow covers, adjustable rosewood bridge, pickguard and bracket and truss rod cover are all from 1949. There are a couple of small notches in the pickguard just over the mounting pin by the fingerboard. The wiring appears to be partially from that year, partially from the 1950s with four correct matching 1949-52 style knobs. The tuners are from the 1970's (they read "Gibson Deluxe" on the casings) as is the tailpiece, which has some wear to the plating and looks exactly authentic to the instrument. The rear pickup riser is later as well; 1940's and early '50s Gibsons used a solid tortoise celluloid piece for this purpose that has usually decayed by now.

The guitar was nicely refretted with correct style wire some time back and playability is excellent. There is a strap button added to the heel. While a bit of a hybrid due to its updated wiring (much preferred by most players, after all!) this is a fantastic instrument that plays and sounds exactly as it should and absolutely captures the 1950s smoky jazz vibe. Oh, and it makes a great blues, R&B, Rockabilly or vintage country machine as well. A lovely Gibson classic with a killer vibe, still residing in the original brown HSC. Overall Excellent - Condition.
×