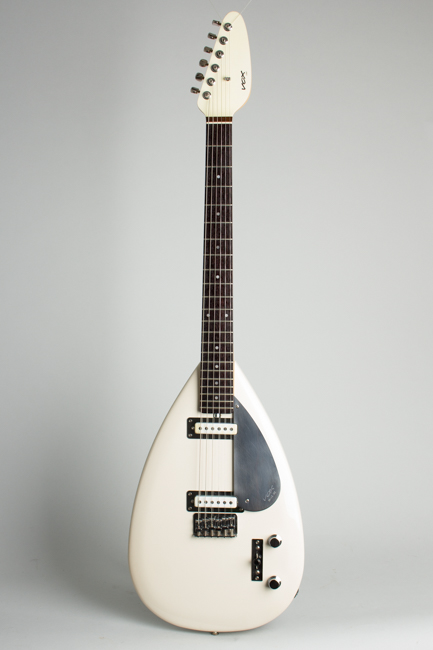 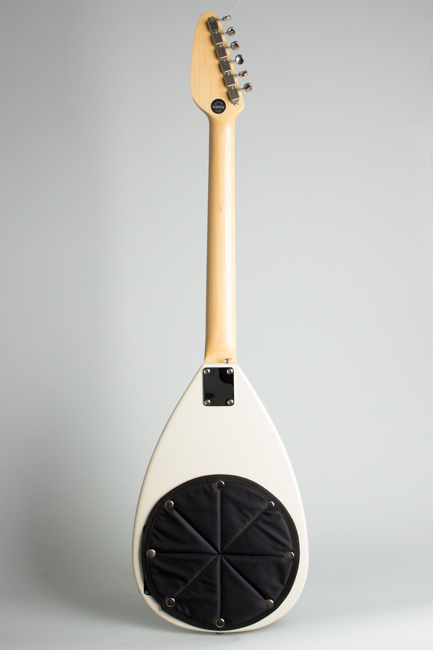 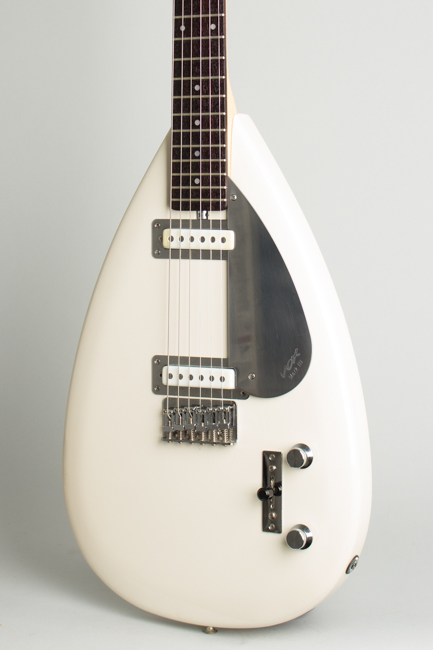 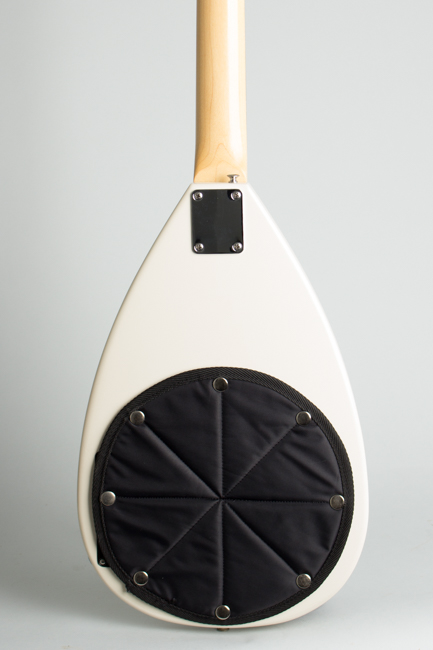 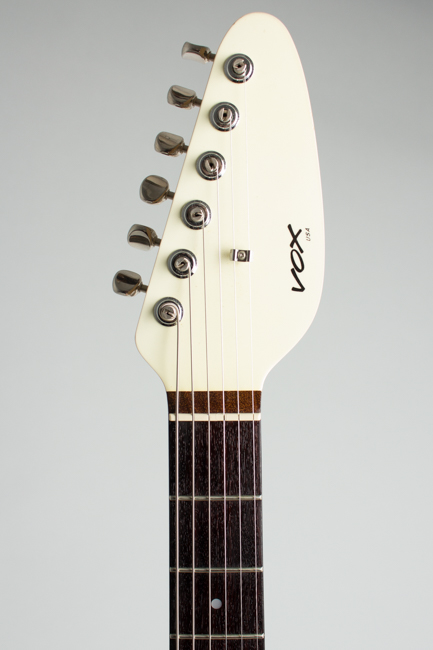 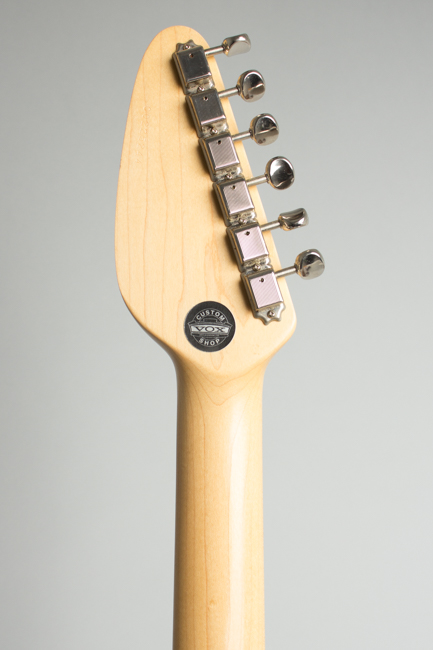 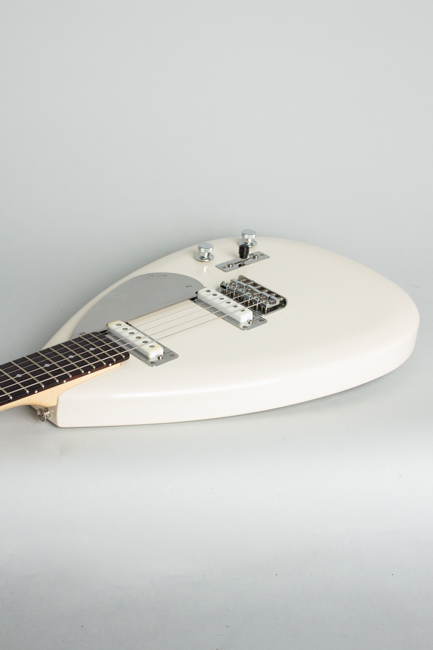 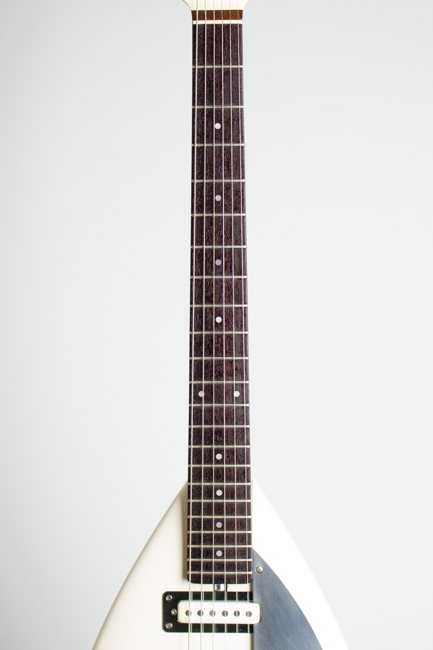 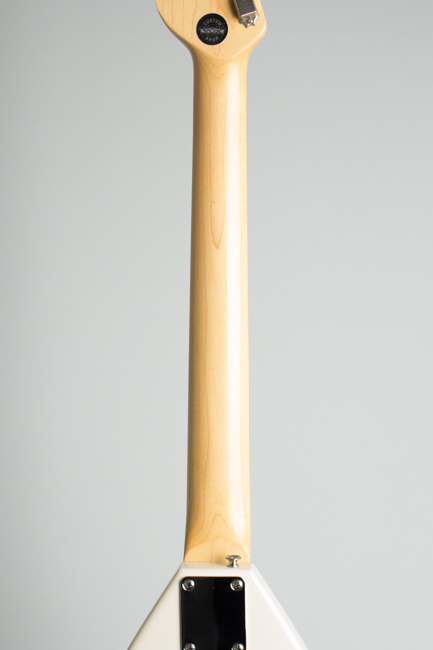 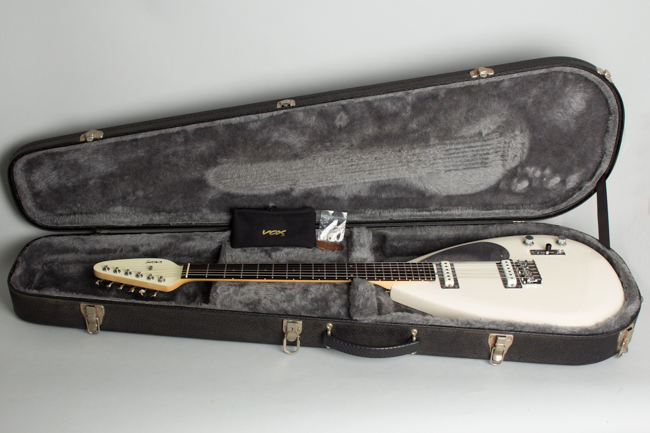 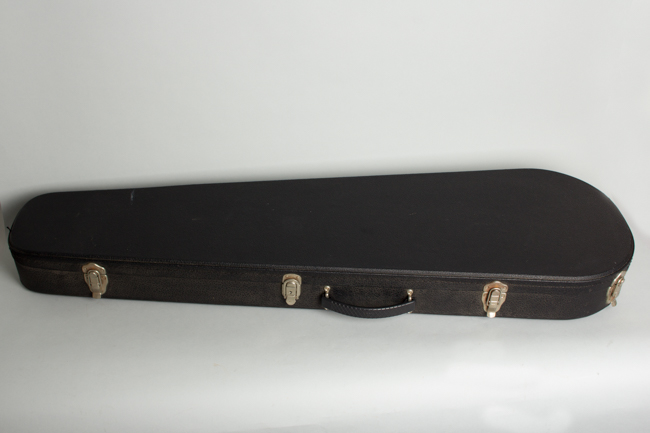 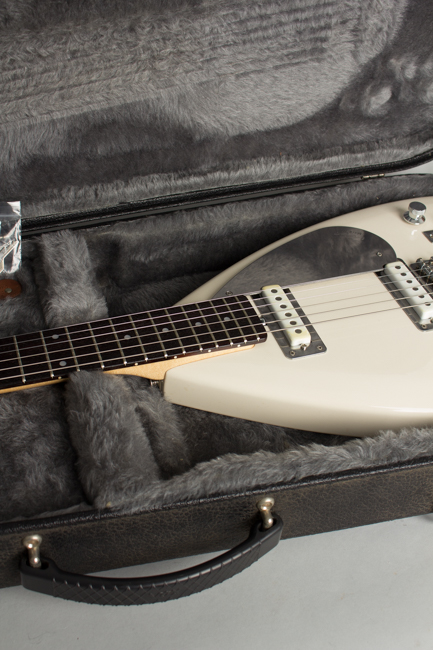 This guitar is a very nicely done re-issue of the iconic 1960s Vox Phantom Mark III custom made as a one-off for Rolling Stone Brian Jones in 1964. It is from a limited number of US-made Vox guitars marketed between 1998 and 2001 by Korg (at the time owner of the Vox marque) and North Coast Music of Minneapolis. This short-lived Vox guitar line comprised several of the original 1960s company's classic models, also including a vibrato-equipped teardrop and the famously trapezoidal Phantom. These were custom tooled and unlike many other Vox repros maintain a high degree of fidelity to the originals. Only a total of around 700 of all models were produced at the time.

This "Mark III Custom" is the most striking of the bunch, and the one with the firmest tie to Vox history. In June of 1964, Brian Jones received a unique Vox teardrop-bodied guitar, a new design the company had recently unveiled. The lute-like body shape was reportedly conceived by JMI founder Tom Jennings and Vox employee Mick Bennet hand-built the instrument. The Rolling Stones were among the top Vox endorsers, so the company was eager to supply band with custom gear. Jones' striking white teardrop became his signature guitar over the next couple of years, instantly recognizable as seen and heard by Rolling Stones fans everywhere.

Vox put teardrop-bodied guitars into commercial production in 1965, made both in the UK and Italy. Many details were changed from Jones' prototype guitar, making his one of those unobtainable 1960's relics. That instrument mounted two pickups and a re-purposed Fender Stratocaster bridge unit, strung through the body. Production teardrops had three pickups and a top mounted vibrato, along with a host of smaller differences. Many teen garage band played these "Vox Mark VI" guitars in emulation of the Stones regardless, but finding one "Just like Brian's" was simply not possible.

This c. 2000 instrument is a late but still welcome remedy to that conundrum, a direct re-issue of the one-off 1964 Rolling Stones guitar. Like Jones' instrument is built with a non-trem Stratocaster style bridge strung thru the body, two pickups and a white-painted matching headstock with a small black Vox logo. There is a Gretsch-like pad snapped to the back, a chromed metal pickguard engraved "Mark III Custom" and a "Vox custom shop" sticker on the back of the headstock.

There are small differences from the actual 1964 prototype. This guitar lacks the zero fret used on the original, has Kluson style safe-t-slot tuners and a visible truss rod adjustor at the body end of the neck. In even more niggling details the pickguard is mounted closer to the pickups and "USA" was added to the Vox logo on the headstock. Still, the overall look and feel are closer to the iconic original than any other commercial re-creation up to that time. The instrument has a very Fender-like feel and is quite comfortable to play despite the eccentric shape.

This particular guitar is a production sample originally sent to renowned amplifier designer Mitch Colby, who was overseeing the Vox brand for Korg at the time. It has remained in his personal collection ever since and seen stage use just once, on a bill with Billy Gibbons' reunited 1960's combo the Moving Sidewalks in 2013. A further limited edition of well under 100 this model was released in 2007, with markings indicating that date on the fingerboard. This is a just plain neat guitar; a fine playing and sounding instrument that instantly captures that heady 1965 vibe. 20+ years on instruments from this very limited run are rather rare, and this Mark III Custom was the jewel of the line.

Overall length is 40 3/4 in. (103.5 cm.), 10 1/2 in. (26.7 cm.) across at the widest point, and 1 3/4 in. (4.4 cm.) in depth, measured at side of rim. Scale length is 25 1/2 in. (648 mm.). Width of nut is 1 11/16 in. (43 mm.).
This guitar remains very clean overall with some minor signs of use. The body and neck show very little wear; there is a small chip in the finish by the truss rod, and one small dent on the top/back rim area. The headstock face has a couple of tiny chips on the rim. There is light corrosion to a few metal parts, mostly the pickup rings and bridge base. A slight yellowing is evident on areas of the pickup covers; this is sometimes seen on the originals as well! Overall the guitar presents as very lightly played, complete in the original oblong hard case with a small Vox-branded toolkit pouch included. Excellent + Condition.
×