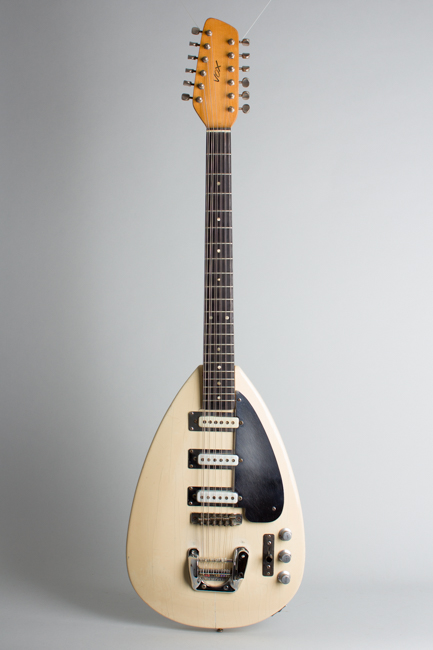 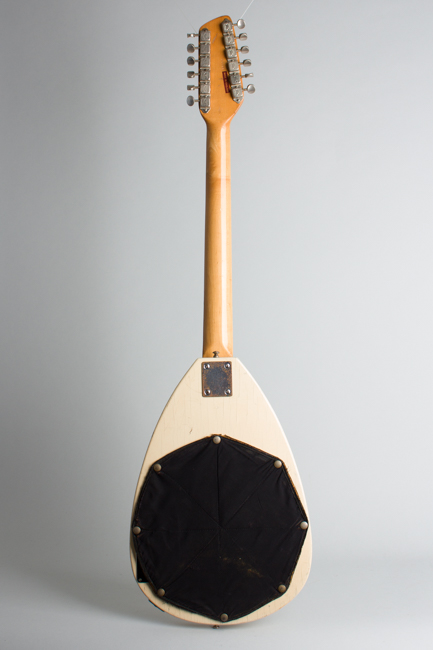 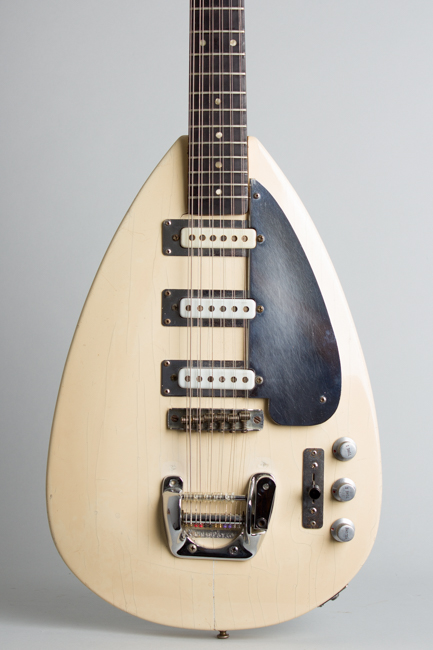 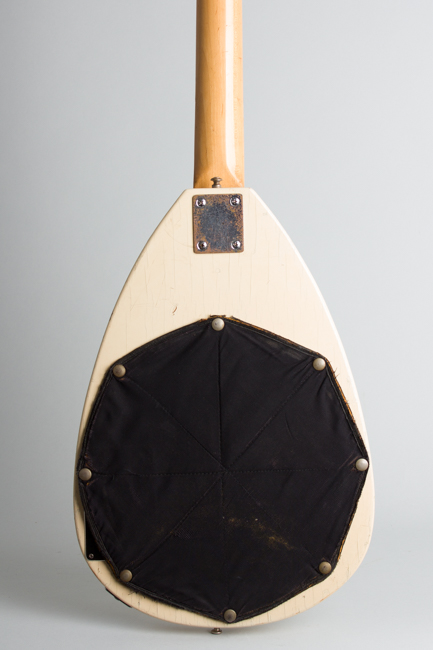 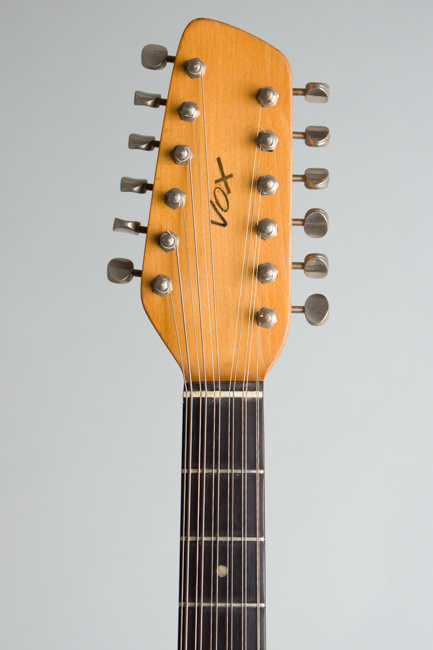 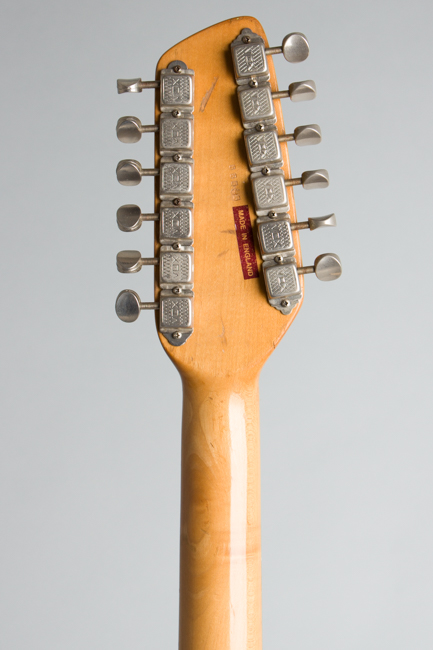 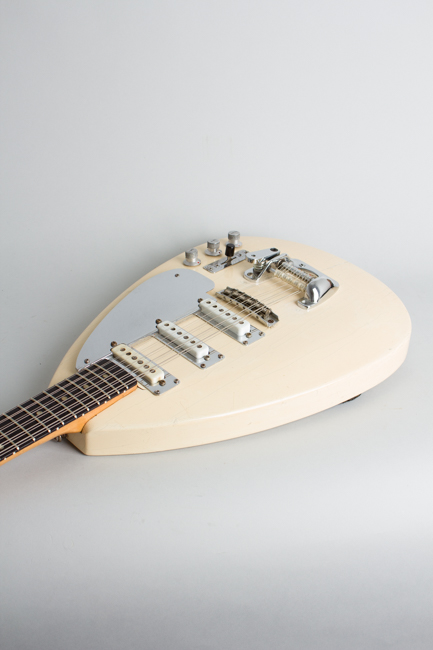 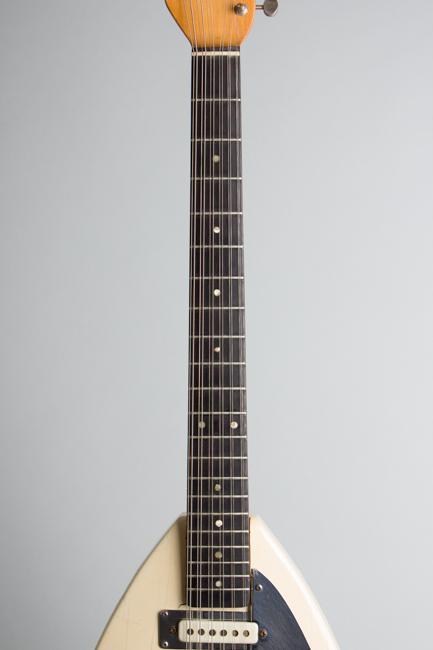 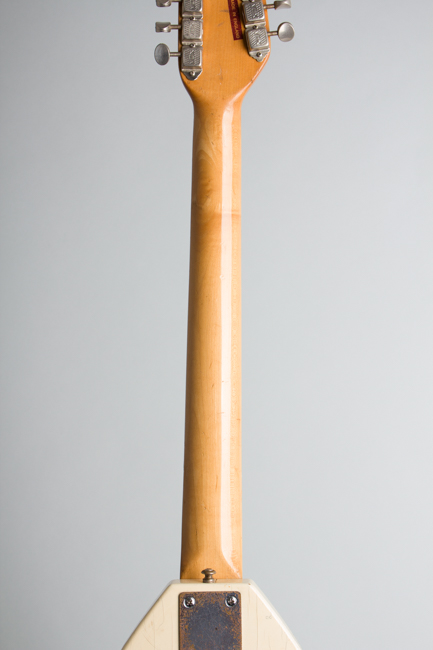 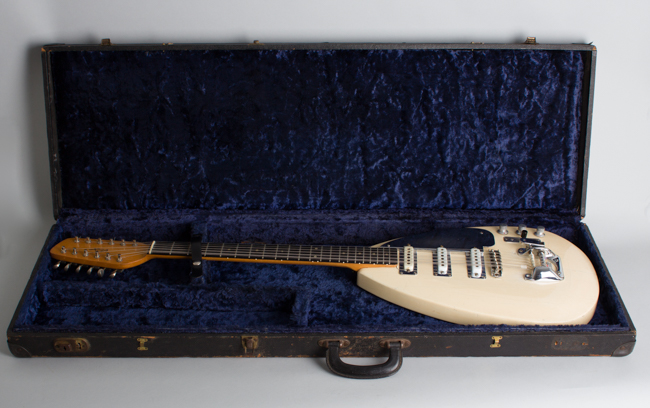 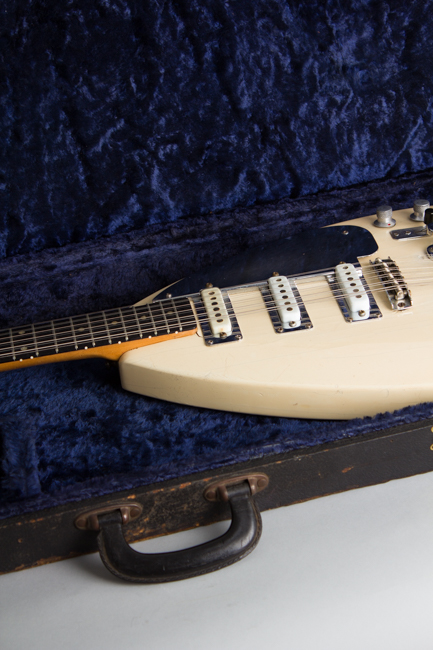 One of the all-time great "posing" guitars, the teardrop-shaped Vox Mark XII is still utterly distinctive and an instant 1960's classic. Unlike most Vox-branded instruments sold in the US, this one was NOT assembled at the Eko factory in Recanati, Italy but at Jennings Musical Industries in Dartford, Kent. Vox's Parent company was already overstretched by 1964 supplying Vox amplifiers to the UK and world markets. Instead of expanding their meagre guitar-making facilities, Jennings outsourced most instrument production to the Italian firm. UK-made Vox guitars are exponentially rarer than their Italian cousins, especially in the US. By the time Thomas Organ in California had fully established American distribution of JMI products in 1965, nearly all Vox guitars sold here would be of Italian parentage.

The teardrop-shaped Mark series was a stylistic outgrowth of the trapezoidal-bodied Phantom line, indeed the earliest model was called the Phantom Mk.III. Brian Jones of the Rolling Stones got one of the first hand-built prototypes; the exposure it received in his hands in 1964-5 was enough to make it the most sought after of all Vox guitars, especially in the US. The solidbody "Mark" series soon expanded to include a full family of 6, 12 and 9 string guitars as well as a bass, all using the distinctive teardrop body shape.

This Mark XII features a maple neck with a rosewood fretboard on a body of African mahogany, finished in white polyester. This white finish is one of several offered for the "teardrop" models; due to the Jones connection it is the most sought after. The three 6-pole single-coil Vox pickups provide a wide range of tonal options, with a sound particularly well-suited to a 12-string. They are similar to 1962-era Stratocaster pickups, but with a more square-ended white plastic cover. Controls are also a ringer for the Strat: master volume and two tone knobs, with a lever switch for pickup selection. The vibrato was developed from JMI's "Hank B Marvin'" unit, basically copying a solidbody Bigsby paired with an adjustable roller bridge.

The Mark XII is one of the better sounding '60's solidbody 12 strings and one of the few to be (dubiously) equipped with a vibrato! This very sharp looking teardrop 12 is fairly well used but still a '60's icon and eminently poseable and collectible guitar! Eko-made Vox guitars are exponentially more common and lack the cachet and more importantly the sound of original JMI-built instruments. An original UK-made instrument like this is extremely rare here in America, and a very cool find.

Overall length is 42 in. (106.7 cm.), 12 in. (30.5 cm.) width, and 1 1/2 in. (3.8 cm.) in depth, measured at side of rim. Scale length is 25 in. (635 mm.). Width of nut is 1 13/16 in. (46 mm.).
Overall this guitar shows a decent amount of wear but remains a nice playable example of this rare instrument, better preserved than many. There has been some work performed over the years, but the guitar still looks and feels as it should. The body finish has typical fairly heavy checking, which is quite common with these English polyester finishes. There is a small crack off the back end of the neck pocket by the bass pickup, visible but not a structural issue. The lacquer neck finish has nicks and dings but no heavy wear.

All hardware appears original, with some wear to the chrome and plastic but everything works as it should. The fabric and foam back pad has wear around the edges but is largely intact. The trem arm has gone missing as has the bridge cover but otherwise the guitar is complete. The Trem unit was moved slightly at some point for no apparent reason, leaving a couple of screw holes patched in the top. Internally the wiring is original with the distinctive UK-made Morganite pots intact. The guitar has been refretted (virtually a requirement on UK-made Vox guitars) with somewhat larger wire than the original and plays very well.

This guitar has a possible if unprovable connection to 1960s stars (and Vox endorsers) the Dave Clark 5. There is a small silver Letraset name tag reading "Denis Payton" in the trem well. Payton was the band's saxophone player and also doubled on harmonica and guitar. There are photos from the later 1960's showing him using teardrop XII strings much like this one; we cannot claim this guitar has any direct connection to the band but it is interesting anyway! It is housed in the rare original blue-lined rectangular JMI UK-made hard case, which is very battered but still functional. Very Good + Condition.
×