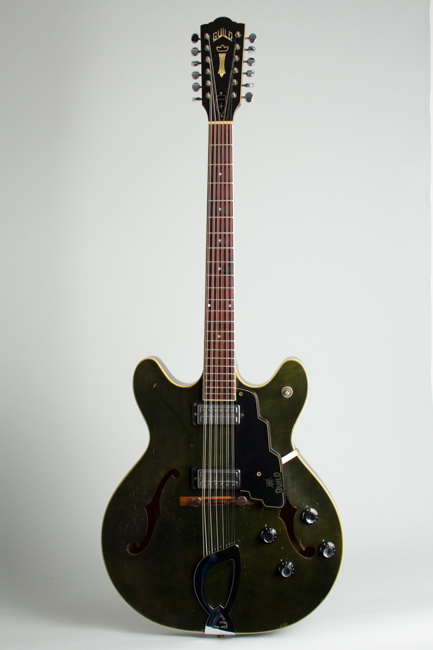 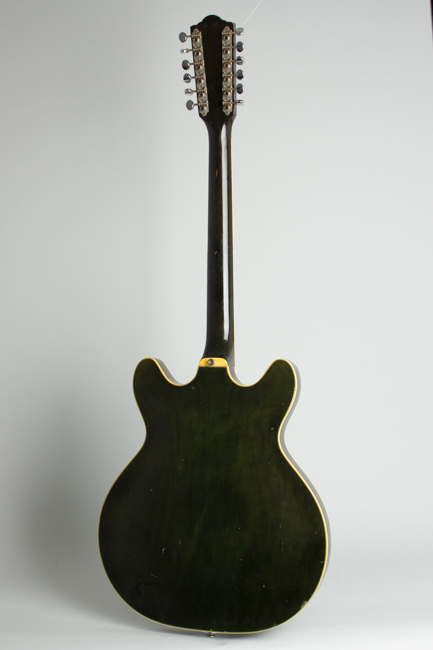 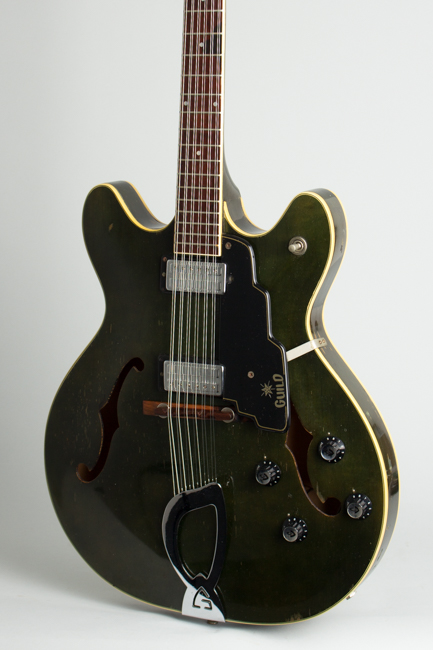 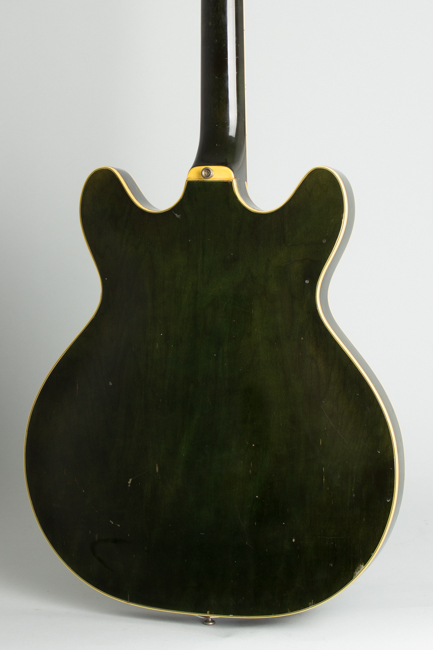 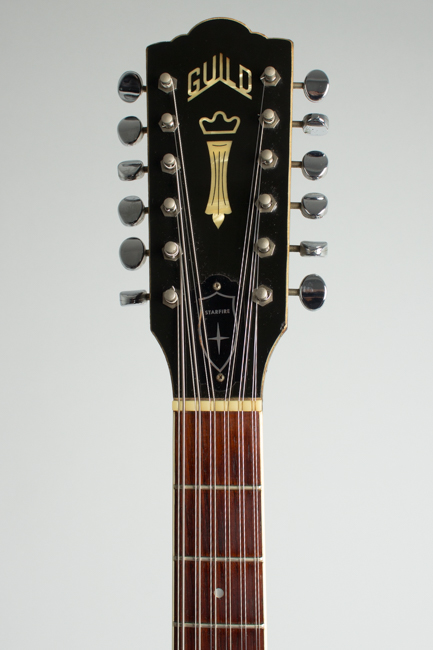 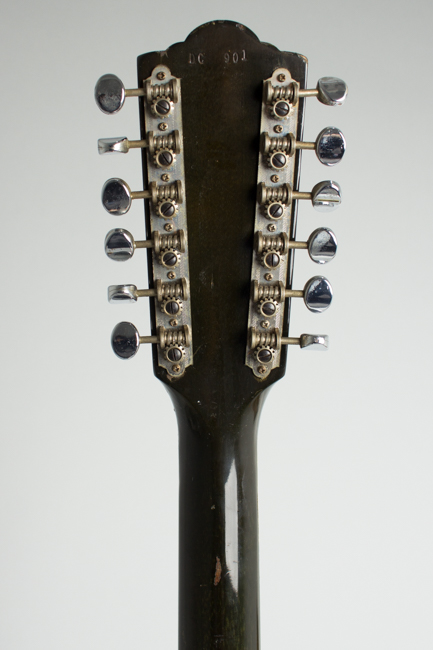 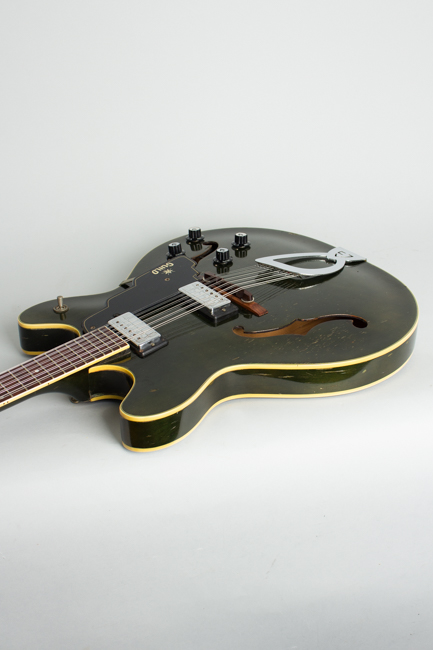 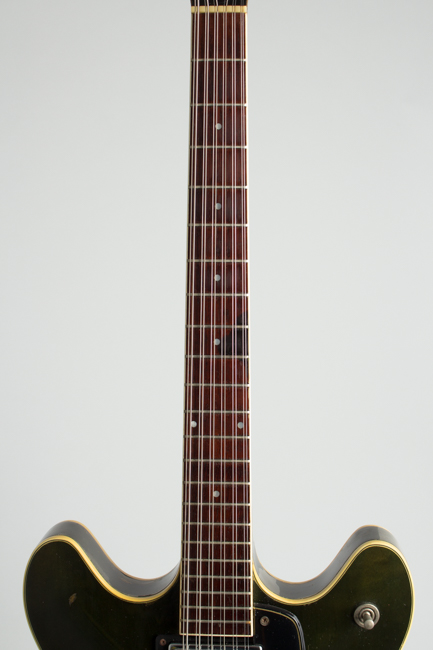 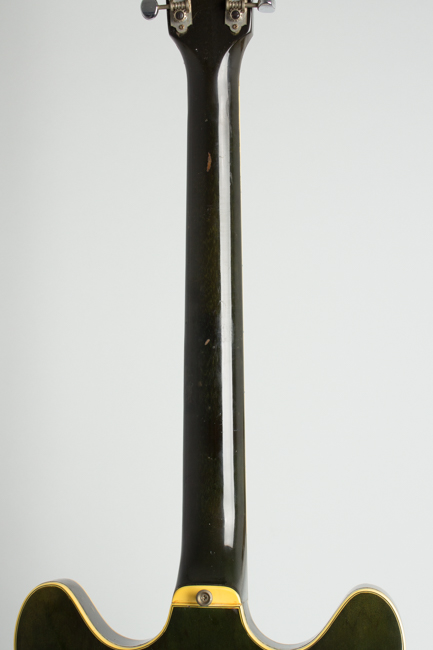 The Starfire series models have been Guild's most consistently successful electric guitars since their inception, and by far the company's most popular electric instruments in the 1960s. This Starfire XII is one of the more obscure variations, a product of the mid-1960s boom in electric 12-strings driven by the Beatles and the Byrds. Guild had seen solid success with their flat top 12-strings, so it must have seemed a no brainer to adapt the thin-line electric Starfire to the format. The Starfire XII appeared at the end of 1965 in time to enjoy fairly good sales in 1966 although it never equaled the 6-strings in popularity.

This is a fairly late production 12-string Starfire in a very attractive and fairly rare custom finish. It uses mostly the same layout as the 6-string Starfire IV, a double cutaway, twin pickup semi-hollow instrument with a laminated maple body and laminated mahogany neck. The obvious difference is the long headstock fitted with two banks of openback Waverly strip tuners. These have chrome-plated plastic buttons, which helpfully reduces the weight of the headstock! By the time this XII was made, the neck joint on the double-cut Starfires had been moved out from the 16th to the 18th fret resulting in better fret accessibility and a feel more akin to Gibson's ES-335 series.

The most interesting and unusual aspect is the beautiful deep green semi-transparent finish. This was a custom ordered alternative to the common stock cherry red or sunburst, listed as available at a $20 upcharge in the catalog. The label reads "Starfire XII Green" with a serial number (also stamped on the headstock) dating this guitar to early 1969. Although this model was not officially discontinued until 1974, the electric 12-string boom had petered out by the late '60s. Very few if any Starfire XII's were made after 1969 and this green example is one of only 13 sold that year. It appears just slightly over 800 XII's were made in total, nearly all of them in 1966-7.

The twin pickups are the typical 1960s Guild humbuckers, similar to but a bit brighter and crisper sounding than the Gibson equivalent with a nice wide tonal range. Like Gibson's similar ES-335 series, the Starfire XII has a solid block running through the center of the body, cutting down on feedback and giving the guitar a tighter tone. Other hardware is shared with the rest of the Starfire line including the clear plastic back-painted pickguard, "harp" tailpiece, G-shield tone and volume knobs and metal-tipped switch. The XII uses a plain compensated wooden bridge instead of the fancier Hagstrom or Bigsby units of other Starfire variations.

This Starfire XII has a fairly narrow 1 5/8 nut but a chunkier feeling neck than some electric 12's, offering more to hold on to than the typical Rickenbacker or Fender XII. It is a very versatile guitar, one of the best-playing electric 12-strings we have had. Although this model is not generally thought of as a blues instrument, Robert Jr. Lockwood played a Starfire XII for some years. This deep green example looks sharp, is a fine player, and remains a bargain compared to similar period Gibson, Rickenbacker or Fender 12-strings.

This is a nicely original guitar overall, showing some wear for its 50+ years on the planet but not appearing heavily used. The finish shows what look like the effect of old moisture exposure mostly on the face, with some small flaked spots and numerous small puckered areas most notably on the lower bass bout. This appears to have been incurred decades ago and there is no further flaking or loss happening to the lacquer. Overall there are also chips, dings, and dents but no large areas worn away. The back and sides of the neck have some wear, and there is an odd darker stained spot on the treble side of the fingerboard around the 8-9th fret area.

All hardware both internal and external remains complete and original, and everything works as intended. The top D string tuner is fairly well bent but still fully functional. The plastic headstock overlay has shrunken slightly but is not curling up or separating as many do. The frets have only minor wear; the crown on the medium/small wire is fairly flat but this appears to be factory work. Despite the minor scarring to the finish on the face this is a lovely guitar and a very fine example of an interesting and very player-friendly 1960's Guild rarity. The original case is not present, the guitar is housed in a more recent deep jumbo style HSC that works fine if a bit bigger than strictly required. Overall Excellent - Condition.
×