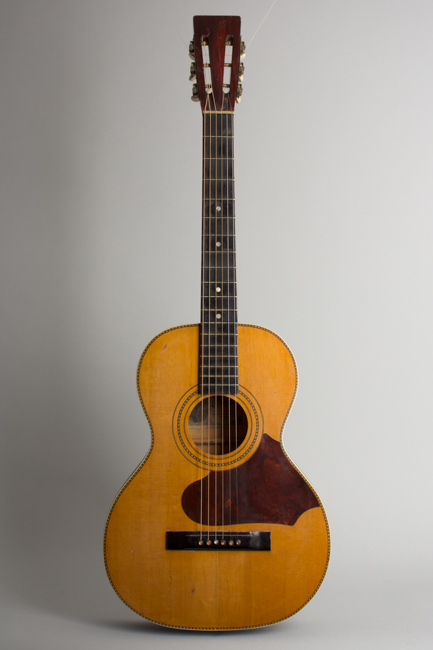 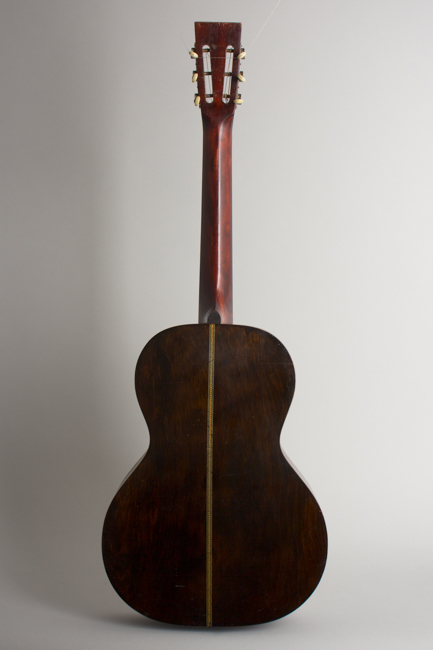 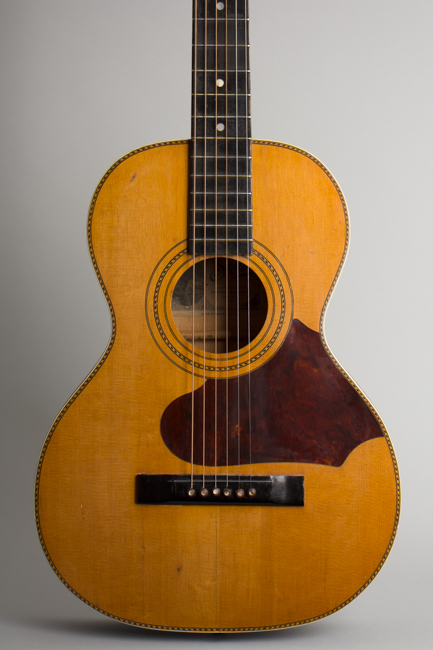 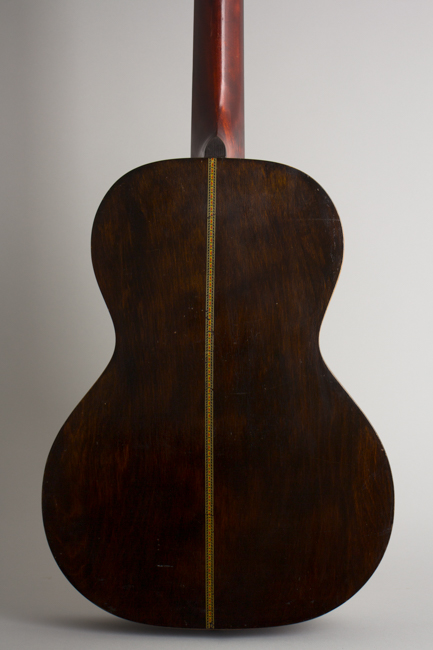 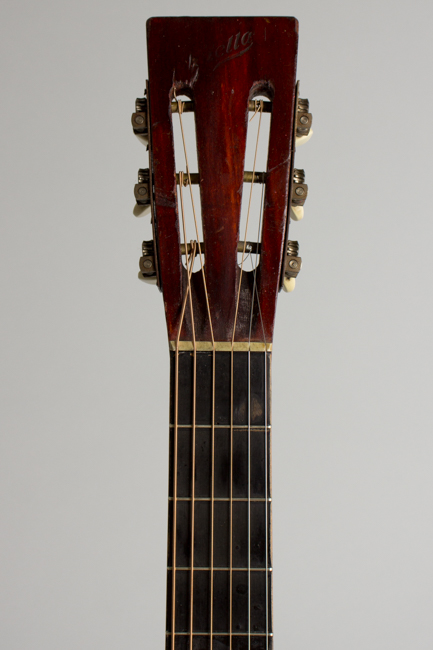 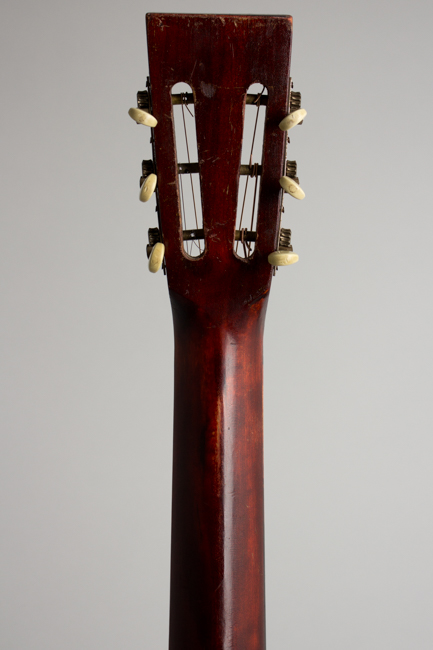 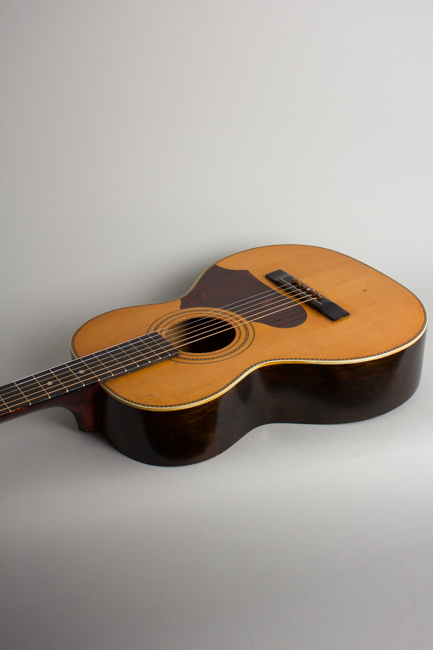 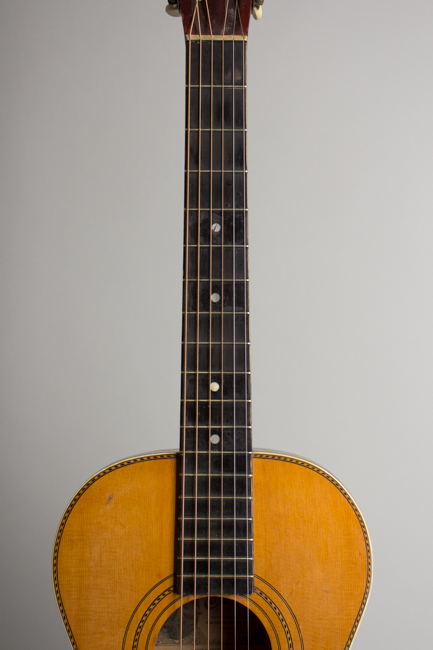 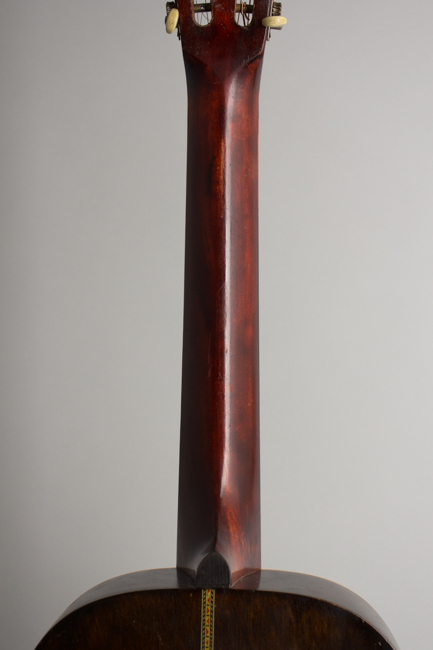 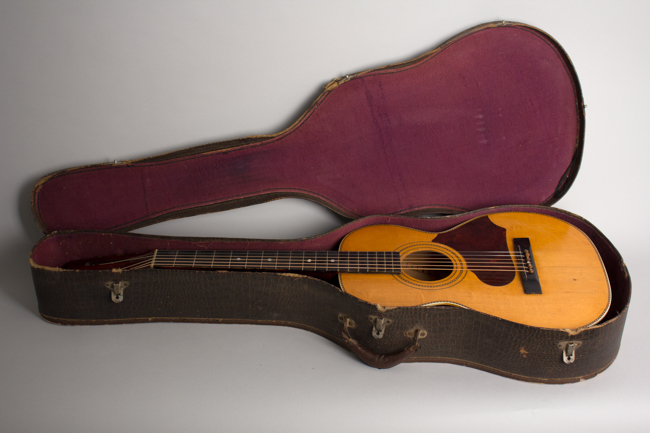 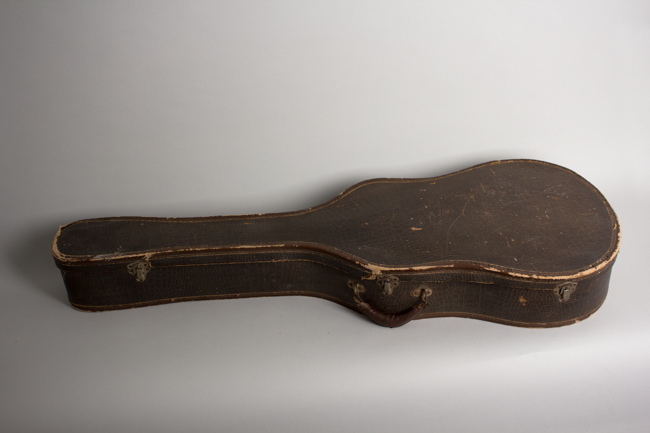 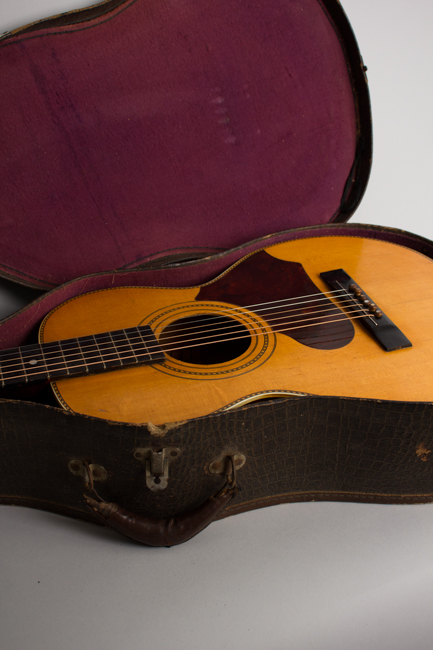 This is an extremely cool Oscar Schmidt-made Stella guitar, a somewhat later example of the endlessly varied instruments marked with this iconic blues-approved brand. It has been heavily used over 90+ years but remains a playable icon and a direct link to the deep pre-WWII blues tradition. These inexpensive but solidly made Stella brand guitars were often the only decent instruments affordable to rural Americans of every stripe, and offered great looks and good sound for the money. When asked decades later what guitars the pre-war bluesman he championed played, early talent scout H.C. Speir responded "Stellas, they all played those old Stellas".

Over a production history from the late 19th century into the mid-1930s, the Oscar Schmidt factory in Jersey City produced seemingly endless Stella and Sovereign branded guitar variations. This is a concert sized guitar built of less expensive woods (birch, spruce and poplar mostly) with medium grade cosmetics. The instrument carries a later version of the classic Stella label in the soundhole as well as the iconic underlined Stella logo impressed into the peghead face. The label has "Made in America" across the bottom, which earlier examples do not.

The nicely tight-grained spruce top has half-herringbone trim around the outer edge and soundhole with white edge binding. The top has a large inlaid tortoise celluloid pickguard typical of later 1920's and 30s Stella and Sovereign models. The stained birch back is not bound, but ornamented with a decal backstrip running down the center. The bridge has been replaced, probably many decades back. It is a bit clunky looking but has an authentic period vibe retaining an original style fretwire saddle.

Internally, the construction is typically Schmidt/Stella. The 13 3/8" wide 12-fret body has a ladder braced spruce top with a large flat bridgeplate in the classic Stella mode. The 24 3/4" scale neck is stained deep red, fairly chunky feeling but slimmer than some Schmidt guitars with a softer "V" profile than earlier Stella models. The ebonized fingerboard has plain pearl dot inlay.

This is a good sounding guitar despite (or perhaps enhanced by) its somewhat down-home funky appearance. It seems happiest in open tunings and is extremely well-suited to the sort of pre-war blues and hillbilly stylings that tend to make players lust after an original Stella in the first place. This is a genuine relic showpiece that would stand out in any context!

This guitar is structurally solid and a good player, somewhat worn in but with these the funk is a big part of the story. This Stella appears moderately heavily played for decades, with some older typical repair work but nothing tragic. The finish has some general wear everywhere, accented by some light gunk and dirt that seems unusually ingrained. Still, the only non-original component is the ancient replaced bridge, still with the original bridge pins. This is a bit clunky looking but has an authentic period charm and works fine.

The original small frets are intact, lightly crowned and not much subsequently worn and quite playable. There is some wear to the fingerboard, which looks to have been re-stained at some point. The neck has been reset, the action good for types of blues picking this guitar excels at. Several spruce grain cracks in the top are solidly sealed up. The interior is intact as Schmidt built it and has not been altered by re-bracing as many have.

This old Stella plays today at least as well (probably better) than it did 90 or so years ago and has strong enough mojo for anybody who has ever coveted an old Paramount 78 to be self explanatory. This won't replace anyone's Martin as an everyday guitar, but if you want a real relic of when blues was only heard in the street, plantation or on shellac discs this is it. It even includes (improbably) the original (or at least correctly fitted period) chipboard case that has somehow survived more or less intact for 90 or so years. Very Good + Condition.
×