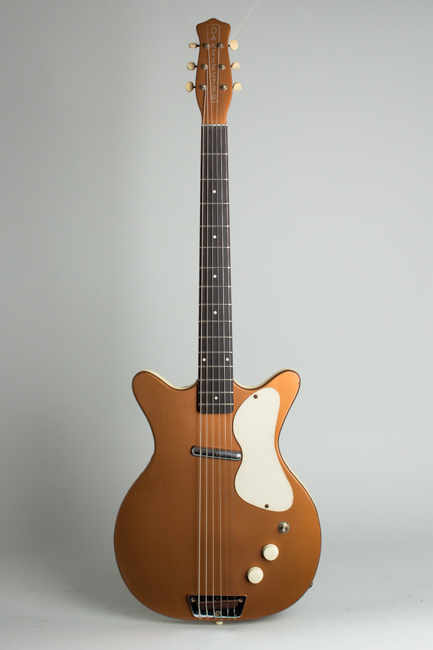 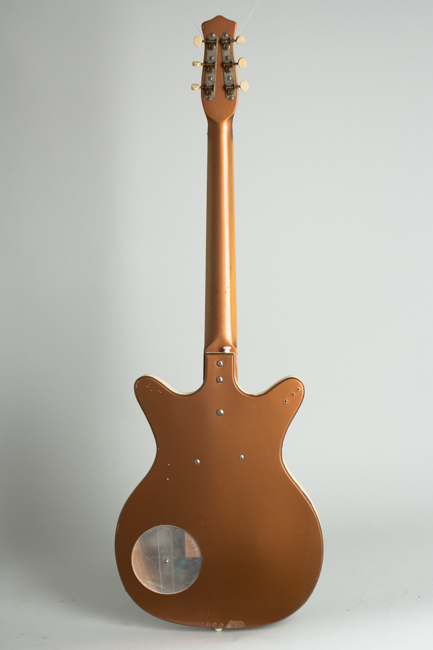 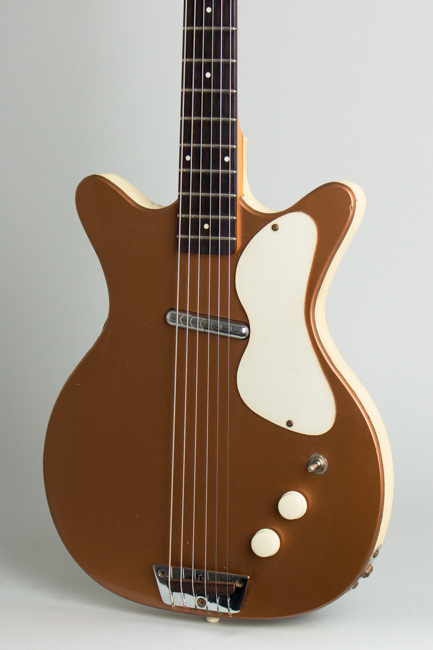 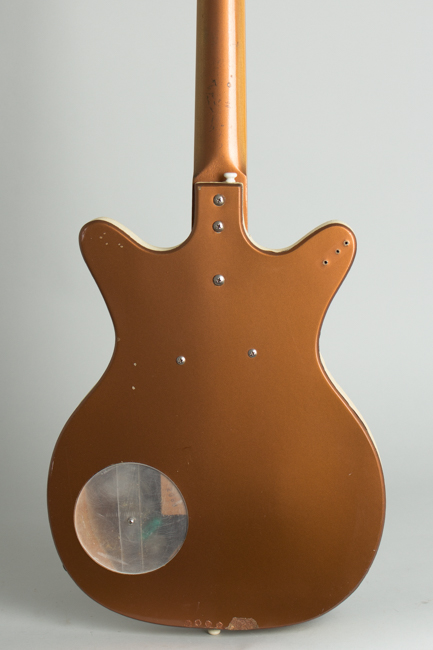 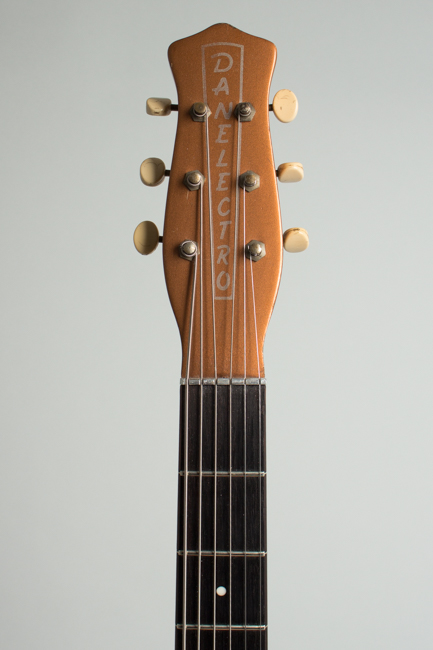 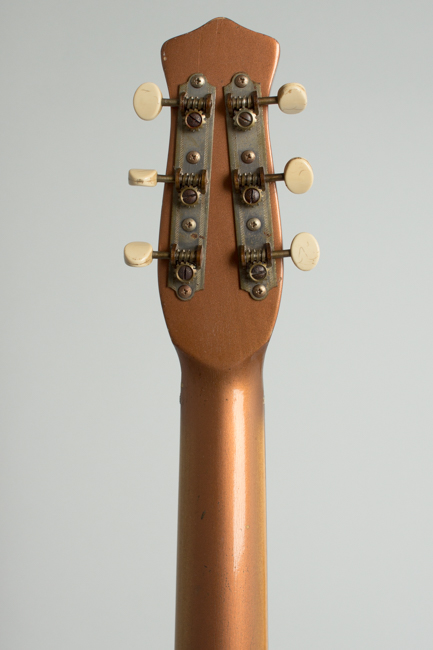 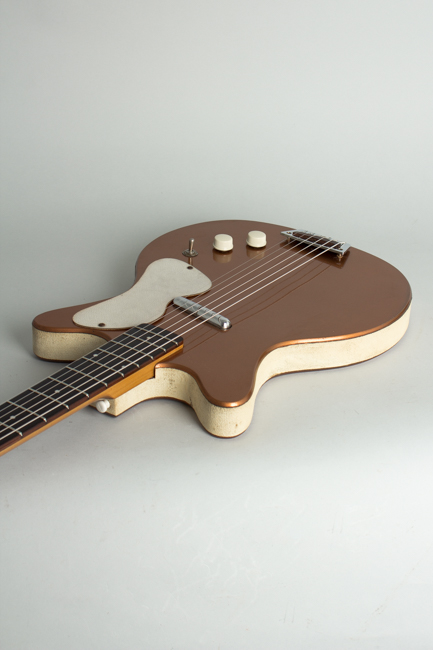 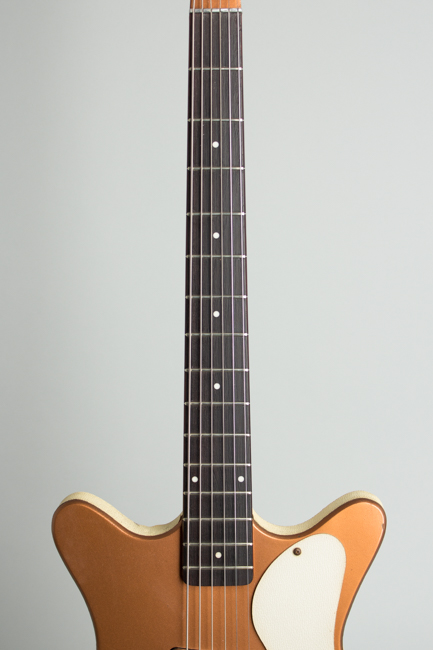 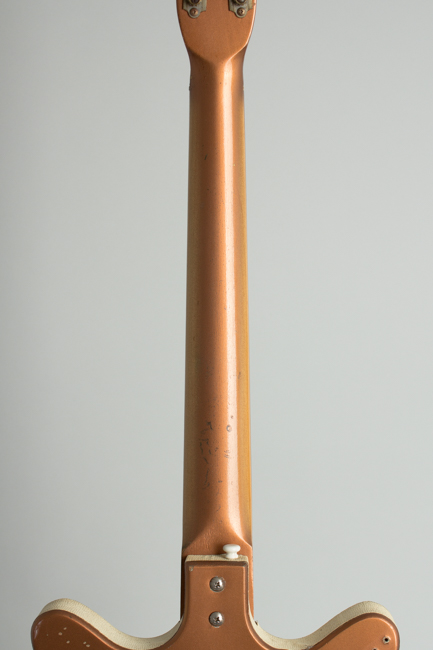 This is a great playing original example of a fairly uncommon Danelectro, the "Standard" Model 3612. While the original Shorthorn guitar and 4-string bass are fairly common as old Dan-o's go, this 6-string bass version was made in far smaller numbers than either and is a much more difficult find. This copper-top beauty is a very early example; dated to the 20th week of 1958 it would have been one of the very first made in the new double-cutaway format introduced that year.

This instrument sports a host of the "classic" 1958 Dan-o features: a copper-lacquered semi-hollow Masonite and pine body with rear "trap hatch" control access, white pebble vinyl side covering and a clear celluloid pickguard with more vinyl beneath. The single lipstick tube pickup is controlled with a volume and tone knob, the latter mated to a 3-way tone modifier switch that selects either a bass or treble roll-off.

The short 15-fret neck has a Brazilian rosewood fingerboard and is topped with the trademark "coke bottle" headstock with vertical silver Danelectro logo. The tuners are Waverly openback guitar strips with plastic buttons. The three Shorthorn models were all built from the same set of standard parts, so the bridge is way down at the base of the body allowing for a 29 1/2" scale bass fingerboard to be fitted on a guitar-length neck.

This example is currently set up in B-B Baritone tuning and is a truly great sounding 6-string bass/Baritone guitar, amazingly versatile even with just the single pickup. It could also be returned to the original E-E 6-string bass setup with minimal effort. This has become a very fashionable instrument of late, as new generations have discovered and embraced the classic Danno twang.

This lovely little bass remains in excellent playing condition and mostly original with some minor changes. The most notable oddity is someone long ago tried to set the instrument up with strings running through the body; six holes were drilled under the bridge by the endpin. These have been filled and touched up but are still visible, with a chip to the Masonite on the back. Most likely the same genius also drilled three holes in the back on the upper horn, probably for some sort of strap attachment. These have not been filled. None of this causes any structural issue but the scars remain.

Other than that the instrument is relatively clean; there is some light wear to the lacquer overall, most notably to the back of the neck. In this early period Danelectro sprayed a color strip down the neck's spine OVER the lacquer sealer; in most cases (as here) it has worn away somewhat. There is some wear to the vinyl covering on the sides which is somewhat dirty with stains and rubs in spots.

The tuners, electronics and bridge are original, the saddle is a correct style replacement (a piece of rosewood!). The cream colored control knobs are more recent, correct in color if not style but with an agreeable vintage look. The missing circular back panel covering the electronics cavity has been creatively replaced with a clear plastic piece allowing a panoramic view of the controls and wiring. The frets have been neatly crowned and the neck is nice and straight. This Danelectro is superbly playable as a Baritone guitar sounding like a million bucks, not the $85 it originally listed for when new! Overall Very Good + Condition.
×