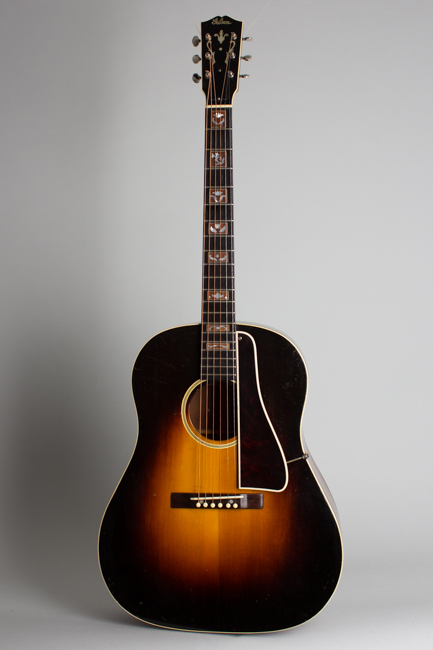 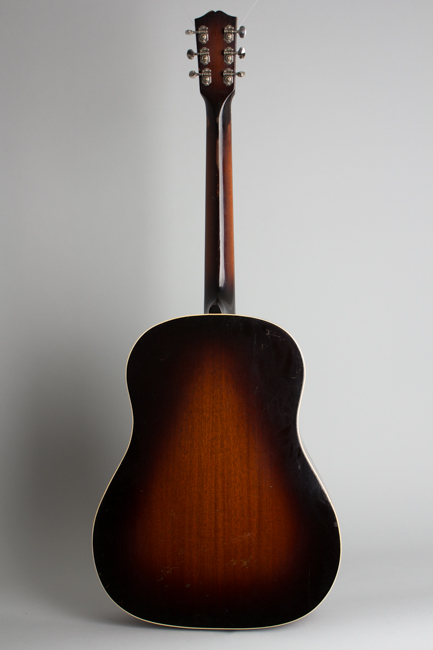 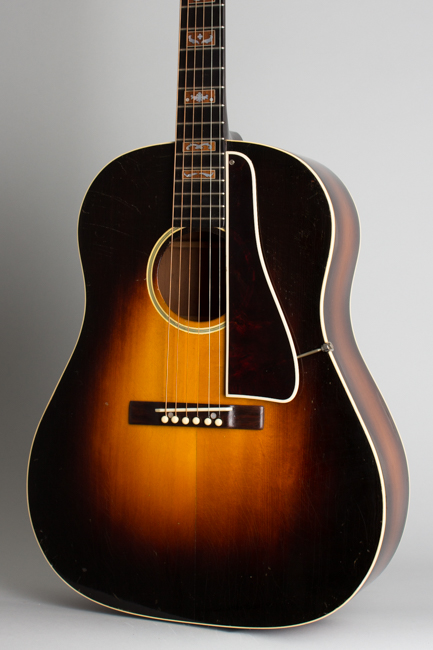 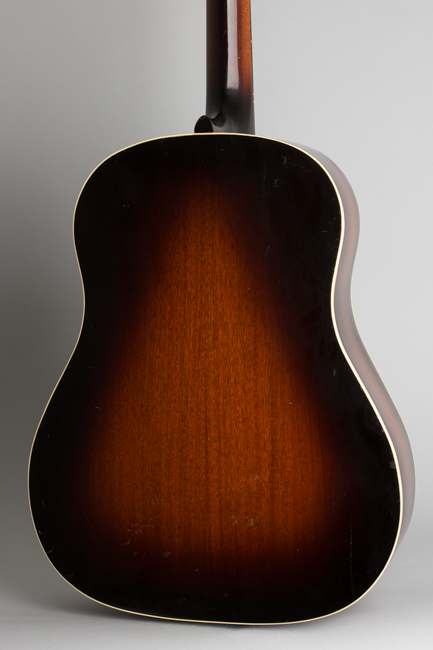 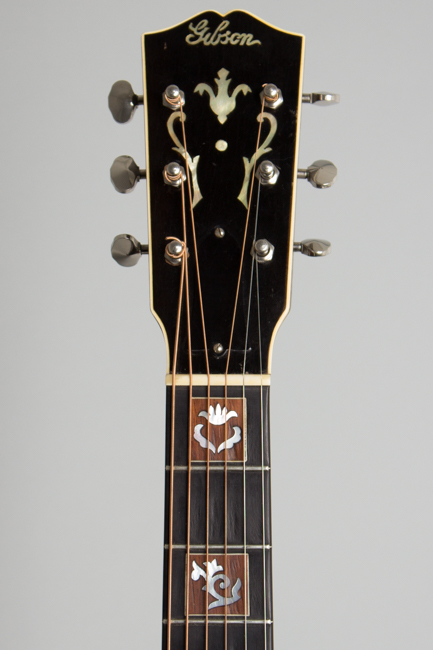 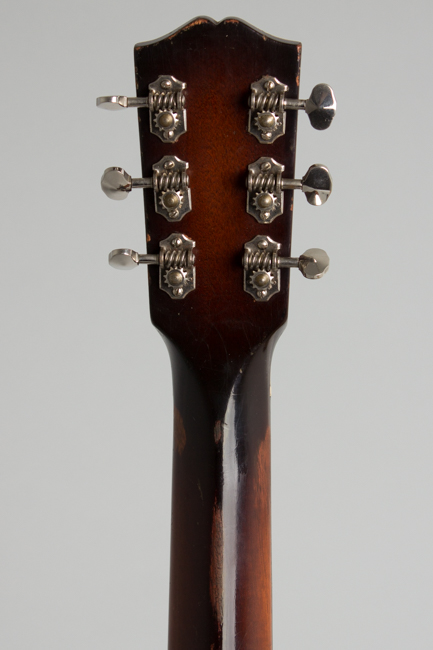 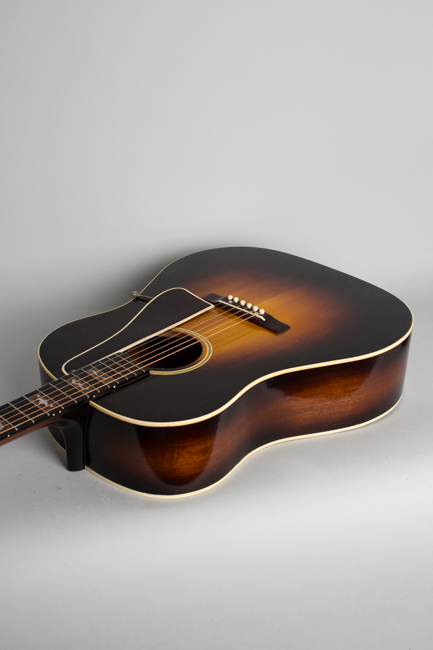 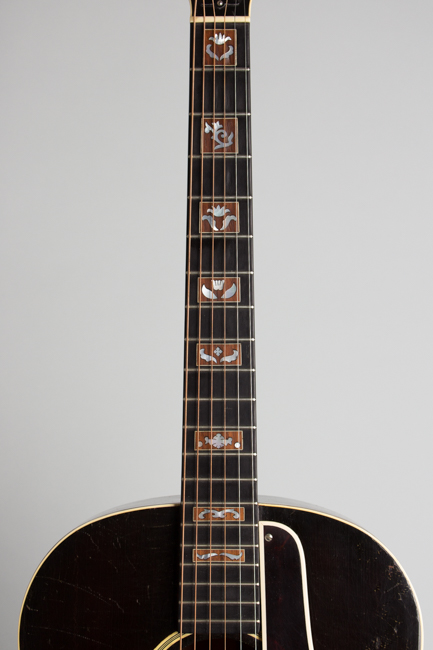 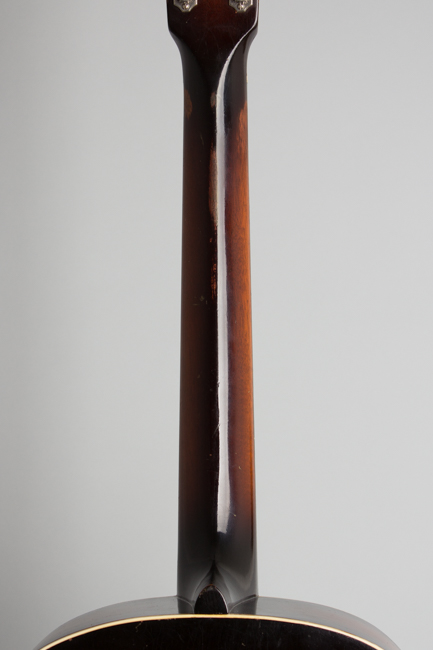 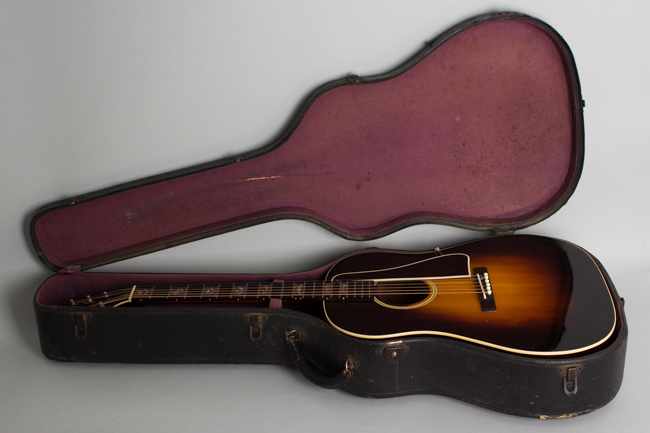 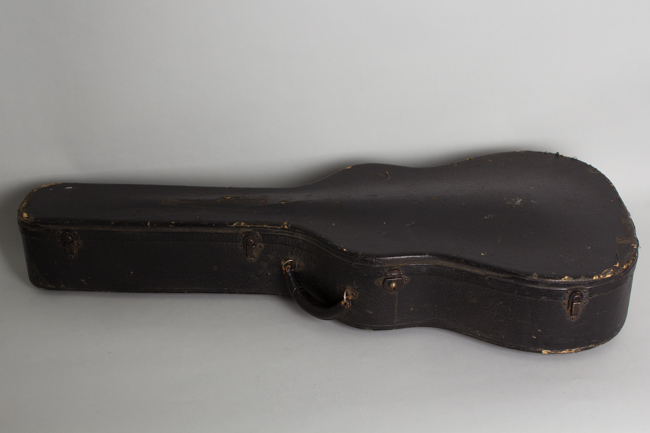 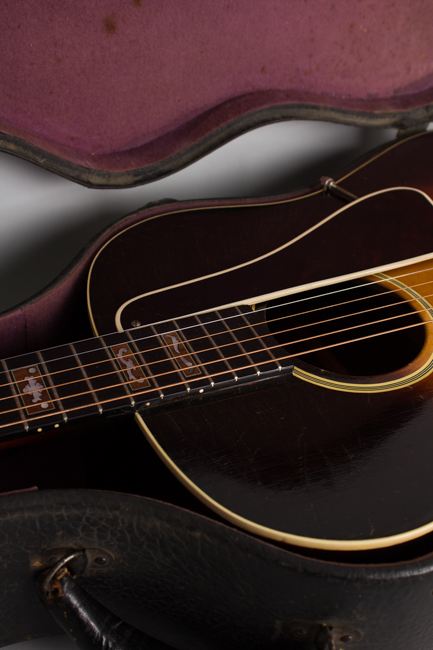 This stunningly beautiful instrument is one of the rarest, most historic -- and just coolest -- Gibson guitars we have ever seen, a one-off custom instrument built in 1935 as a super deluxe version of the then-new "Jumbo" flat top. The "Jumbo" was the Kalamazoo company's first 16", round-shoulder flat-top Spanish guitar, their answer to Martin's recently marketed Dreadnought models. Gibson's Jumbo was a powerful-sounding, big-bodied instrument that became the progenitor of generations of round shouldered "J" flat top models that have since become some of the world's favorite guitars.

The original 1934-5 Jumbos are very rare; this one is at another level as it is a one-of-a-kind creation with the basic Jumbo chassis decked out with cosmetic features of the contemporary L-12 Arch top. This would have been a custom order, and as far as is known is the only guitar of this pattern in existence. The factory order number #201A puts its construction fairly early in 1935, when the Jumbo itself had been on the market for a year at the most. Somebody obviously liked the new flat-top but wanted something flashier, and Gibson was happy to oblige! At the time the Jumbo listed at $60, plus case; the L-12 was $175. It's not possible to know exactly what this guitar cost when new, but it would have been somewhere between these figures, and a lot of money in 1935.

Some features remain typical of the early Jumbo model. The mahogany body is the same size as standard models with no taper to the depth, an unusual characteristic Gibson soon changed. It is finished in dark sunburst on the back, sides, and even the neck, another short-lived Jumbo trait. The top and back are single bound; the elevated bound tortoise celluloid pickguard is more typical of an arch-top than a flat top pattern.

The neck has a substantial "V" contour but is fairly shallow back to front. Unusually the fingerboard is a flat radius, which is not typical of the model, and may indicate the original owner intended to play at least some of the time in a Hawaiian style. The flashy fingerboard decoration is the same pattern as the 1935 L-12 arch top but with extra "picture box" inlays at the 1st and 17th frets. Interestingly enough the board is not bound, although the headstock is. The inlay there is the "vase' pattern used on the L-12, under a pearl Gibson logo. The riveted-gear Grover tuners are the standard fitting for 1935.

The sound hole rosette pattern is fancier than normal for the Jumbo, but the same one has been seen on at least one other custom Gibson flat top from the same period. The very tight-grained spruce top is finished in the finer hand-rubbed sunburst typical of Gibson's better arch tops. The small rosewood bridge appears to be original, and has a slanted saddle indicative of standard style setup. It also has two bolts through it between the saddle and pins covered by pearl dots which also appear original. The original small maple bridgeplate is intact and unaltered. The bracing is a standard early Gibson X pattern with three non-scalloped tone bars behind it.

Whoever ordered this guitar got a very special instrument that would have turned heads even at the time, as it still does now. While perhaps not quite as flashy as Martin's pearl-trimmed D-45, it is a very elegant looking piece with a distinctly Gibson character reflecting the best of what the Kalamazoo luthiers could turn out. This one-off guitar is very well documented, appearing on page 285 of George Gruhn & Walter Carter's 1993 ACOUSTIC GUITARS and page 62 of THE CHINERY COLLECTION published in 1996. We consider this to be simply one of the great Gibson flat-tops for both playing and collecting, a truly wonderful and absolutely unique instrument.

Repairs to the instrument are also relatively minor. The top seam has been resealed and cleated, solidly but visibly. There are no other cracks to the top; and only a couple of small sealed grain splits to the upper back. There are also two very small rim cracks in mirrored positions at the turn of the lower bout into the waist on each side near the back. There are all sealed but visible with no overfinish. The finish itself shows a few very small touch up spots but no major overspray or additions.

The small wire frets appear to be original with some light wear; there is some very minor divoting to the fingerboard in the first position. The neck angle is excellent and the neck does not appear to have ever been reset. The combination of the flat radius fingerboard and arched saddle feels a little odd at first but not too distracting and playability is excellent all the way up the neck. The bridge with the angled saddle appears original, or an exceptionally well-done reproduction if not. It appears to have been reglued at some point. The bone saddle itself has likely been replaced, or at least re-shaped. The guitar is an excellent player by any standard.

This is also an absolutely fabulous-sounding guitar -- powerful, resonant, and with exceptional projection. It is not quite as dark and warm sounding as some Jumbos we have heard, but instead has a very authoritative higher midrange bark with a real shimmer to the high end. This exceptional piece is not only an exceptional Gibson flat-top rarity but an extremely fine player's instrument as well. It is one of the loveliest Gibsons we have ever had in stock, an exceptional piece of Gibson history and a wonderful instrument as well. It also includes the original flat-base hard shell case, which is very rare in itself. Excellent - Condition.
×