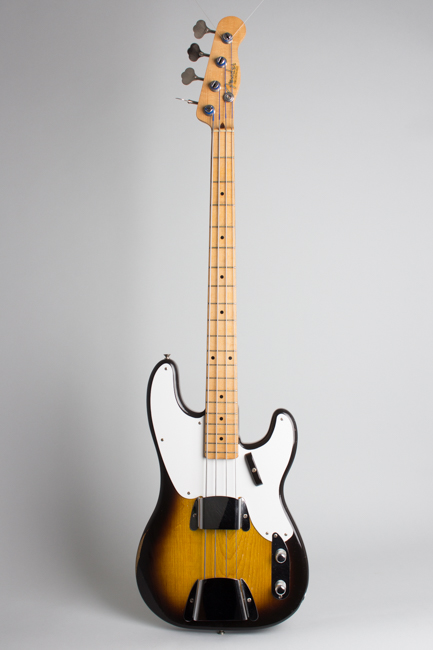 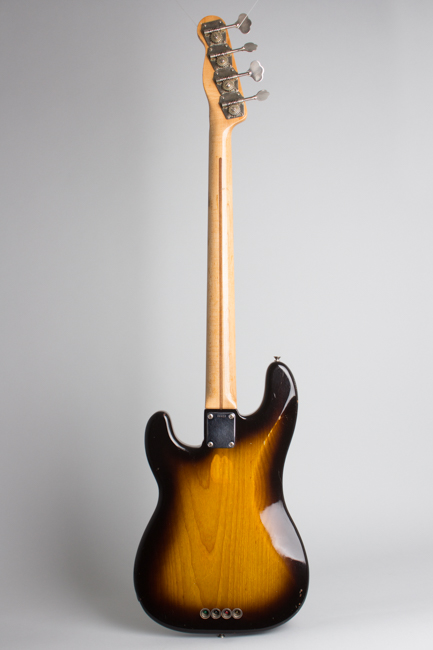 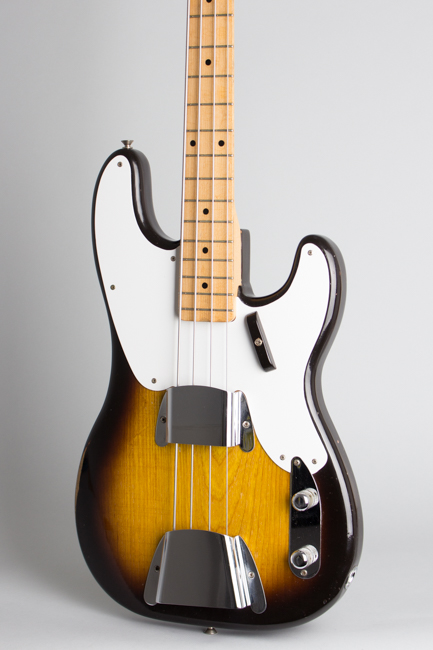 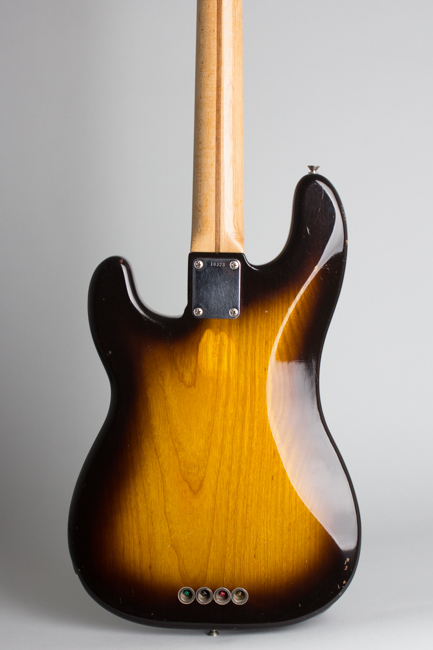 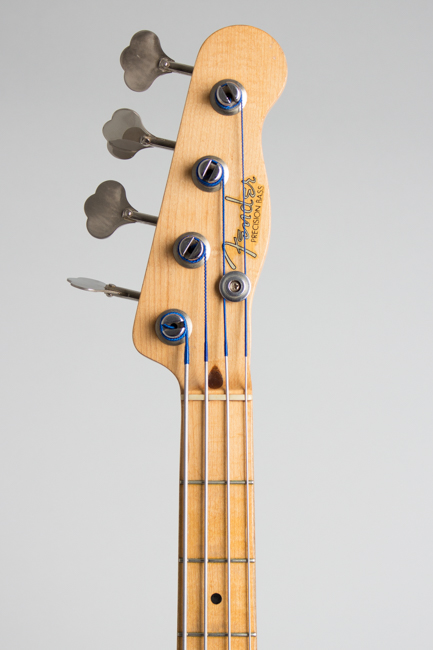 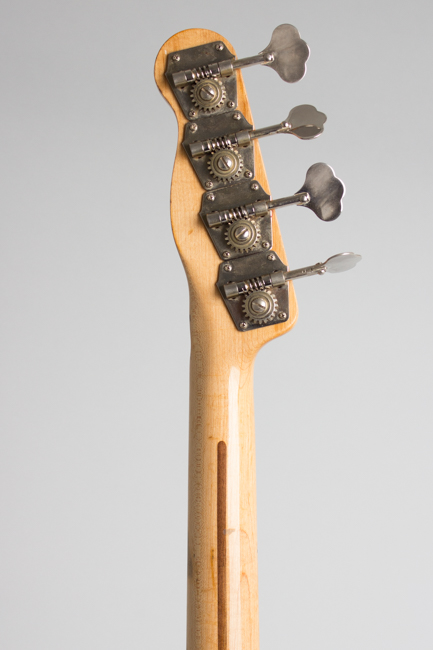 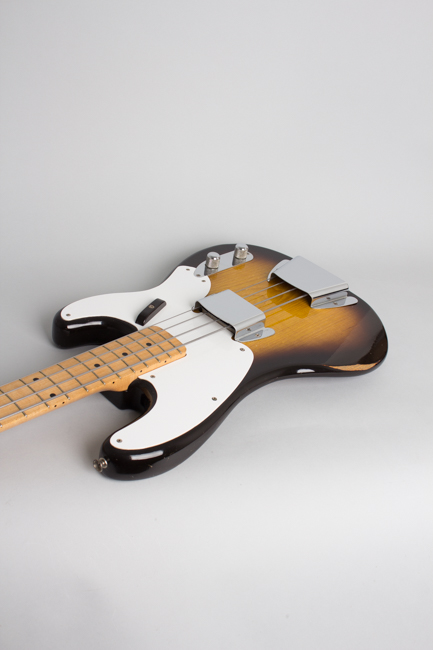 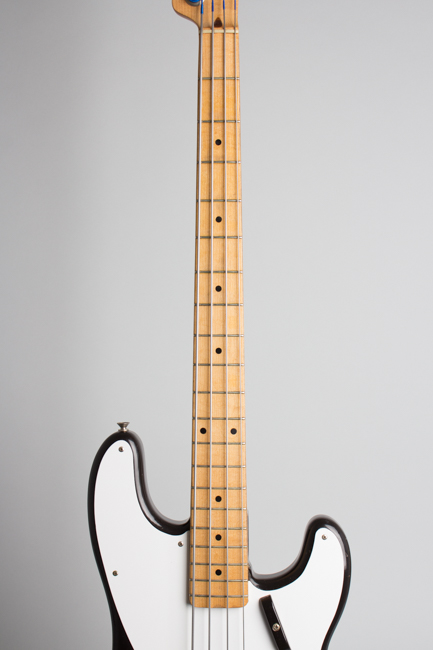 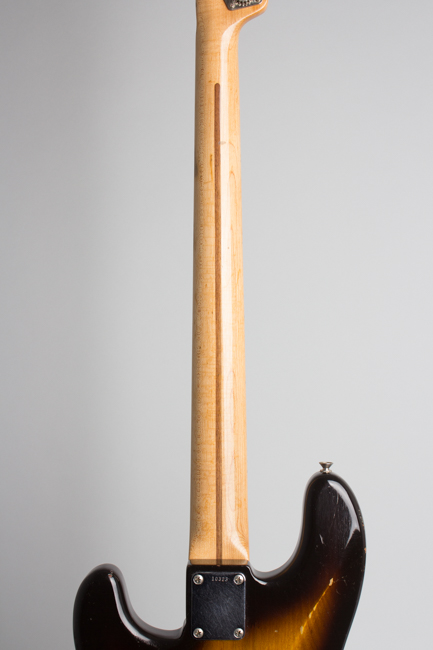 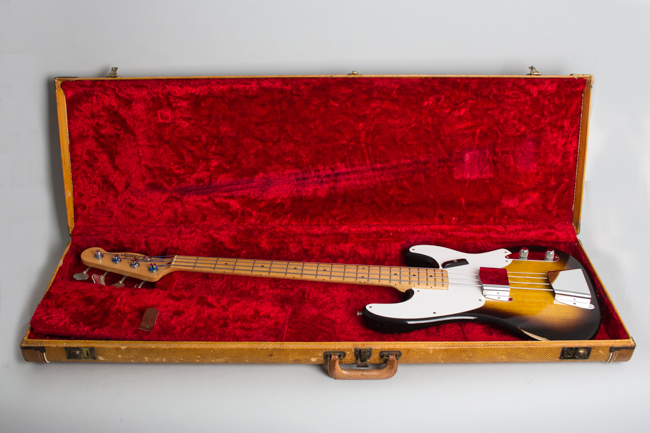 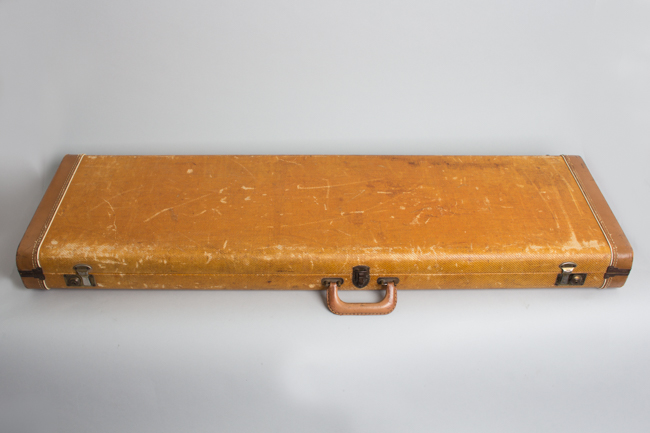 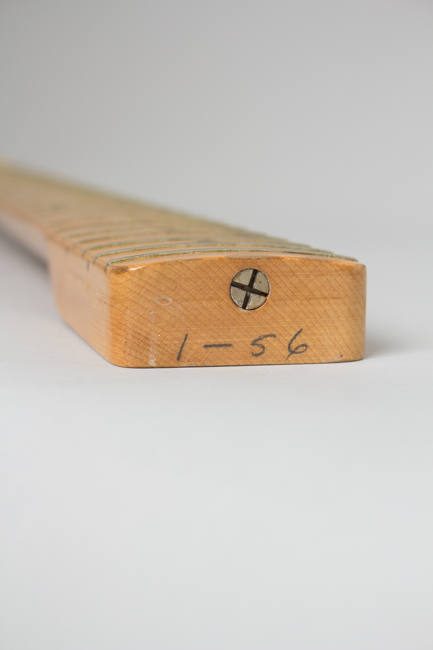 This is a superbly well preserved all-original example of the "second generation" Fender Precision Basses, the instrument that took the electric bass from curiosity to everyday tool. In early 1956 when this bass was made, the Precision had started shedding the original "baritone Telecaster" look introduced in late 1951 and take on characteristics of the newer Stratocaster. The ash body is "comfort contoured" instead of the earlier slab style, and the finish is the two-tone sunburst introduced on the Strat.

The neck date on this instrument is 1-56, making it a fairly early example of the newly made-over model. A year and a half later production shifted over in mid-1957 to the "new" Precision Bass with a split two-coil pickup, larger headstock and anodized aluminum pickguard, so these were not in production for very long. Several notable players of the time helped popularize this version of the Fender bass including Bill Black with Elvis and J.W. Brown with Jerry Lee Lewis.

This bass has typical features of the 1955-6 Precision Bass most notably the original single-coil pickup, with the staggered-height polepieces introduced in 1954. The single layer white plastic pickguard covering the upper half of the body was a newer look, consistent with the other Fender models at the time. The 2-saddle bridge strung through the body and smaller "Tele" style headstock are holdovers from the original design, although the bridge now has steel thinner saddles in place of the earlier hard composite ones.

The original pots are dated to the 11th week of 1955, topped with the dome-top knurled knobs typical of earlier '50s Fenders. The fingerrest "tug bar" mounted on the pickguard is made of wood, painted black and secured with a single screw at the center. The early style chrome bridge and pickup covers are intact and original, the mute pad from under the bridge cover carefully removed but still included.

The one-piece maple neck is somewhat slimmer than earlier 50's basses, still round-backed but with a subtle hint of the "V" contour coming in 1957. The low 10,000 series serial number is on the neckplate, where it had migrated from the bridge base not long before. The two-tone sunburst finished body is a beautifully grained piece of ash -- Fender would soon enough move to using less expensive alder wood for the body on the sunburst instruments.

All early style Precisions are comparatively rare, especially in clean, unmodified condition like this one. In recent decades ex-Police front man Sting has used a Precision Bass nearly identical to this one (heavily worn with the pickguard removed) extensively, so some now refer to this variant as the "Sting" model. This is an extremely comfortable and great-feeling instrument, with a focused and powerful sound. It has escaped most of the typical wear and tear old Fender basses typically endure over the decades, surviving intact just as Leo and his crew built it 65 years ago.

This bass is extremely well preserved for its 55 years on the planet and shows only some light wear overall. It also remains perfectly ALL original down to the last screw, with no major repairs and the sound and character one would expect delivered in spades. The thin lacquer on the body has some minor checking overall with only some very light play wear overall including some small dings and dents with a line of finish rubbed off the top edge in the usual armwear spot.

The only visible repair is a spot of belt buckle wear to the center of the back that has been touched up and oversprayed, with a clearcoat that extends over the middle of the back. This was likely done a long time ago; the work is visible but not overly intrusive. Someone took very good care of this bass and was probably very annoyed at wearing the finish through, hence had the spot cleaned up.

Every part on the instrument is original, including the somewhat fragile exposed-coil pickup which -- unlike many -- has never been removed or rewound. All solder joints appear original and untouched. The steel bridge saddles show some corrosion, hidden under the bridge and pickup covers which are still intact with the chrome still shiny. The original mute foam remains in the case having been carefully removed from under the tailpiece cover. It still works well and we would be happy to re-install it if asked! Every screw remains original and yes, we ensured each one went back into the same hole after the bass was disassembled for inspection.

The fingerboard has just some very minor wear through the lacquer in the lower positions under the strings. The back of the neck is quite clean with the finish intact except for a small spot on the treble edge by the third fret. The original thin wire frets have some very minor roundwound string wear but do not appear to have ever been worked on. The bass is currently strung with flatwound strings both for sonic reasons and to preserve the fretwire.

This is not only an amazing piece of Fender history but also just a fantastic player's bass; a superb-handling instrument with a bright and powerful sound that mellows down beautifully with the very effective tone control. It comes complete in its original first-generation side-pocket tweed case, nicknamed the "knuckle buster" because the center latch is directly under the handle. The case has a decent amount of external wear but is fully intact. This is simply a superb treat for the Fender Bass enthusiast, and a delight for bassists of any stripe. Excellent Condition.
×