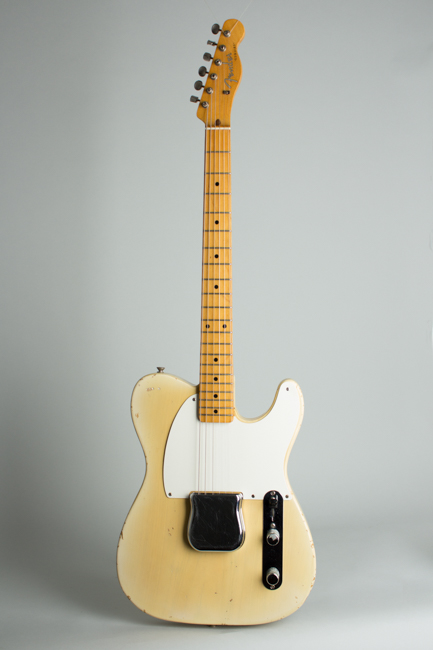 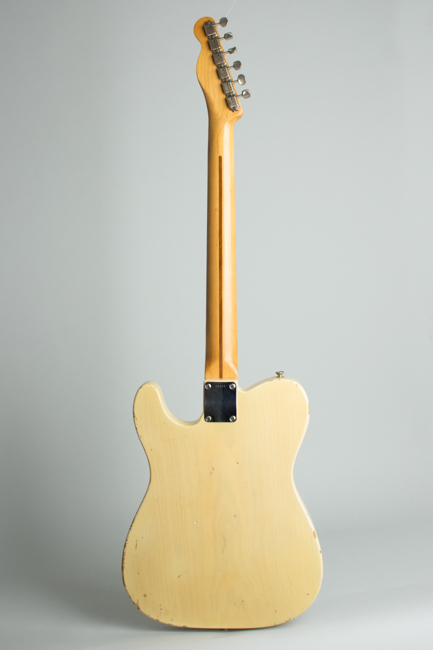 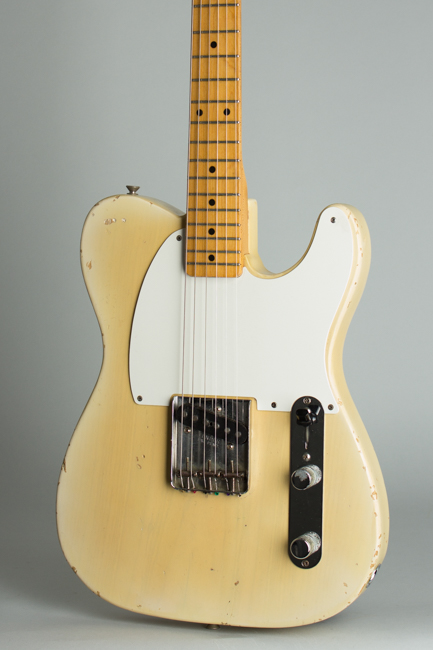 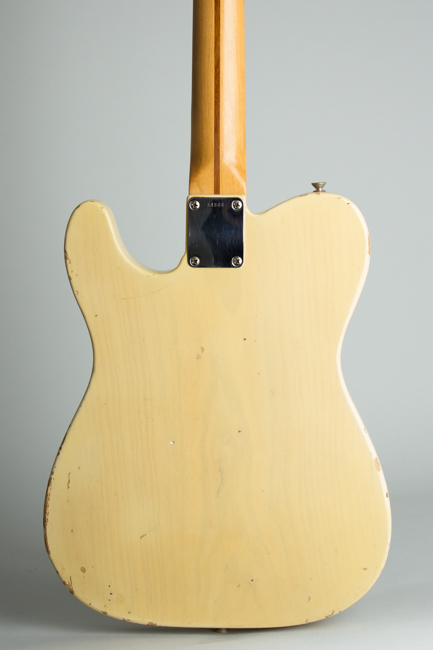 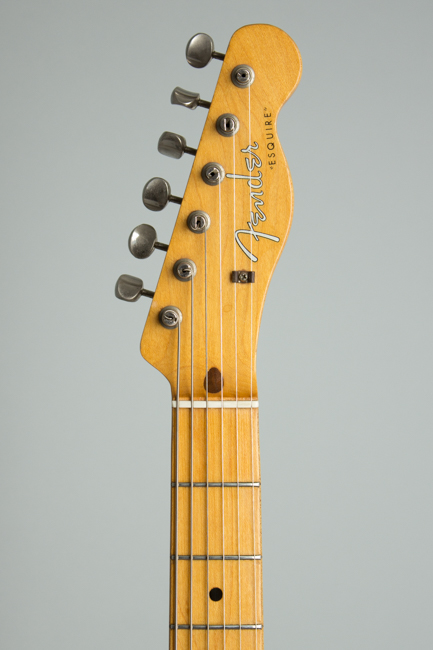 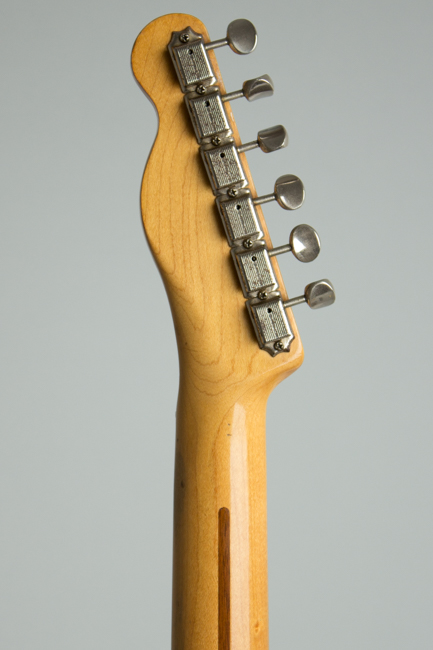 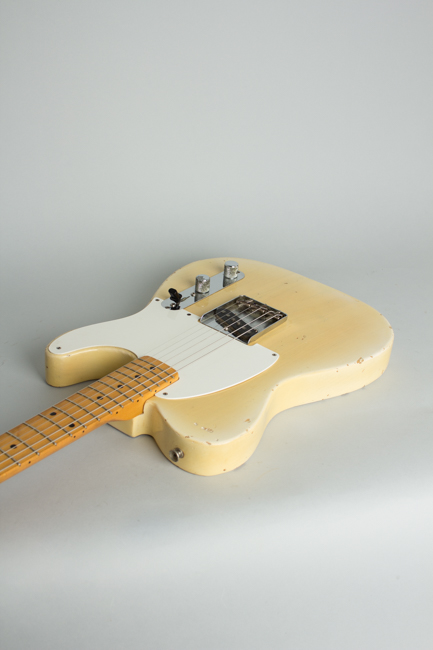 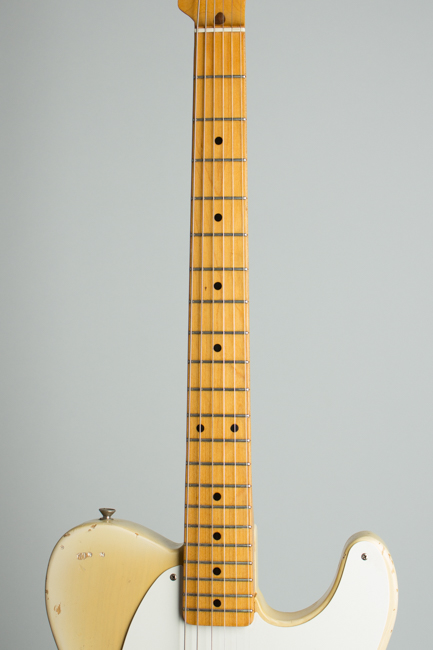 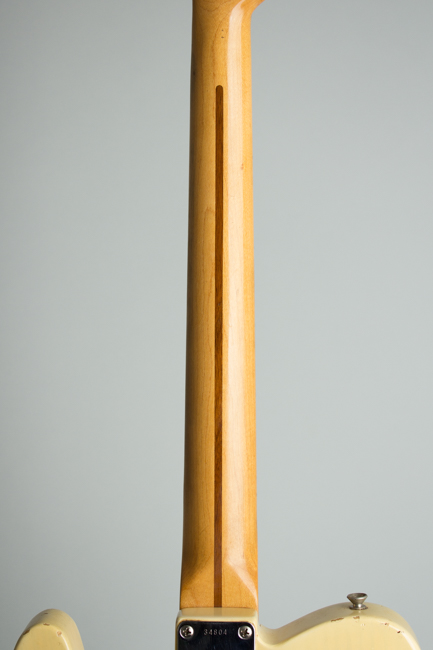 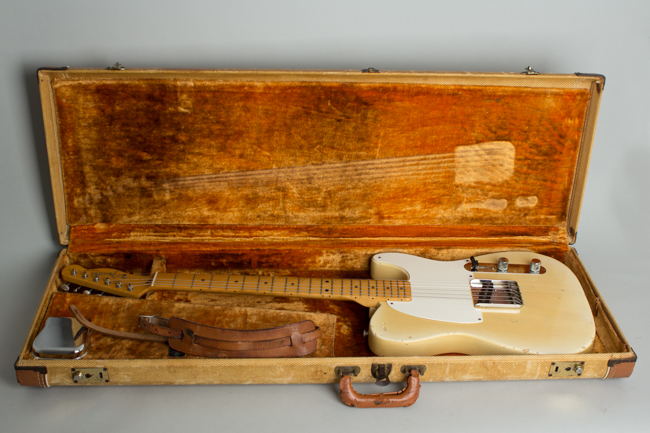 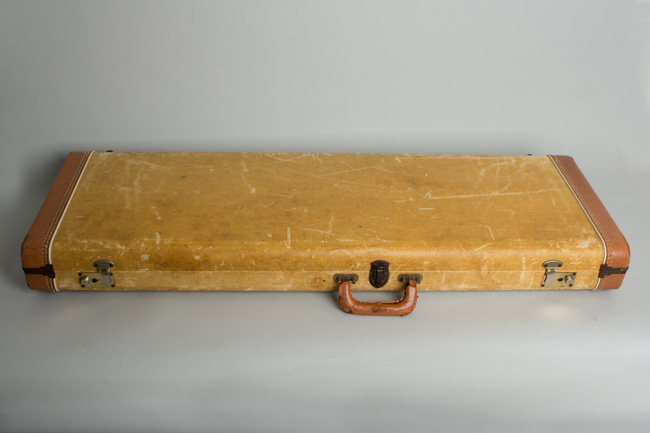 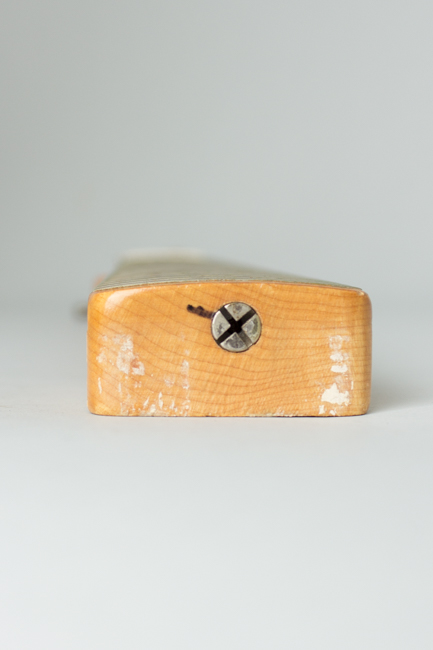 This is a lovely example of a 1959 Fender Esquire, one of the last of the original maple fingerboard examples. The neck is not dated (correct for mid-1959) but the features of this Esquire are a very specific combination found only in this period. The body is dated 1-59 in the pickup rout and the pots are coded to the 16th week of that year. By the beginning of the 1960's the Fender line had changed considerably, and the Esquire would seemingly get lost in the shuffle.

The "Esquire" name had been in use at Fender since 1950 designating the single pickup variation of the Broadcaster/Telecaster, by the turn of the 1960s its popularity was in decline. While classed as a separate model, The Esquire was assembled from all the same parts as the Telecaster, allowing Fender sales to offer a slightly cheaper alternative for the buyer who couldn't spring for the Tele's $189.50 price tag.

By the time this one was made in mid-1959, sales of the Esquire were in decline, outpaced by newer Fullerton models both more expensive, like the Stratocaster and brand-new Jazzmaster, and the lower-priced Duo-Sonic and Musicmaster. Fender's introduction of these budget-priced student guitars in 1956 cut into the Esquire's territory somewhat, and the model began to languish.

Starting later in 1959 the one-piece maple neck fitted to this Esquire would shortly be discontinued in favor of the new "slab" rosewood fingerboard across the fender line. The neck profile is round-backed, quite unlike the "V" pattern of 1957-8. It is fairly flat and slim in cross section rather like the early rosewood board necks in feel. The 5-digit serial number is stamped on the neck plate, and is typical for early-mid 1959.

This Esquire is what Fender aficionados call a "top loader", because the strings feed through the back end of the bridge instead of through the body. This was a short-lived production change that lasted only from late 1958 to early 1960; apparently Fender's customers preferred the original design and the company responded to their wishes.

The blonde 1959-era finish is somewhat thicker and more translucent than earlier Fender blonde guitars. It is also a more "white-blonde' hue, though this one like most has yellowed a bit over time. The single layer white pickguard is secured by five screws; this was increased to eight by late 1959. This "blank" pickguard conceals the factory rout for the neck pickup, as the bodies used were exactly the same as for the Telecaster.

The Esquire control rig is unique, although visually the same as the Telecaster with standard knurled metal volume and tone knobs and 3-way switch with a "top hat" tip. The wiring is cleverly designed to offer three tonal options on a one-pickup guitar: #1 is a bass-heavy setting, #2 engages a normal tone control function, and #3 is a "bypass" setting sending the signal straight to the jack. This last notch is the Esquire's secret bonus, offering some of the finest, snarliest tones ever to emerge from Fullerton.

As the 1950s progressed, the Esquire was ordered in ever-shrinking numbers, making it generally rarer than the same year Telecasters. This mid-1959 example has seen some use but remains unaltered in excellent playing and sounding condition. For years many Tele fans discounted these fairly rare "Top loaders" as categorically inferior to their earlier sisters. It took NY guitar maven Jim Campilongo to demonstrate to fans worldwide that they have a distinctive character unique to themselves, and now "Top Loaders" are sought after in their own right.

This 60+ year old Esquire shows some relatively minor wear and remains beautifully original internally and externally. The original body finish has numerous smaller dings, dents and chips, mostly along the edges as is typical for slab-sided Teles and some random dings into the face. The hardware shows some light corrosion, with plating loss to the top of the volume knob and minor corrosion on the steel saddles and the tuner shells.

The neck finish is very clean, with hardly any of the usual fingerboard wear and just some lacquer rubbed down to the wood on the treble side edge. The frets are original with probably one G&P in the past, and are extremely playable. The nut appears to have been replaced, probably at the same time. Everything else is original down to the screws and the snap-on bridge cover, which has some scuffing on the top. The guitar remains original internally, having never had a neck pickup fitted as was once common. The single staggered-pole pickup and complex multi-capacitor Esquire wiring rig are original and untouched. the Fender Esquire decal on the headstock is perfectly preserved.

This old Esquire has survived just the way we love 'em; played in but well cared for, unaltered and ready for the next 60+ years. The sound is simply glorious, bright and snarly when cranked but still sweet and bell-like when the amp is backed down. This is one pure, under 7 LB. package of real, genuine unadulterated vintage 1950's Fender goodness in its simplest form. It resides in the original red plush-lined tweed Fender case, which has some wear but is still quite functional. Inside the pocket is the original brown "top grain leather" Fender Strap. Overall Excellent Condition.
×