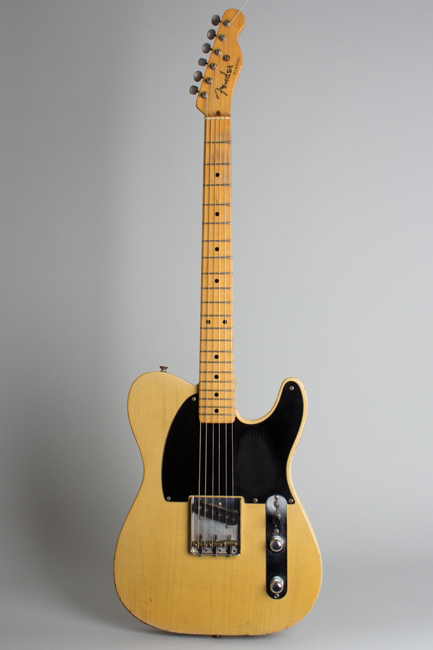 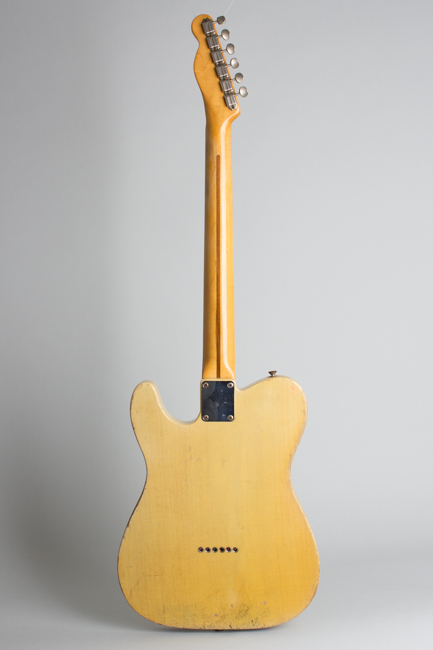 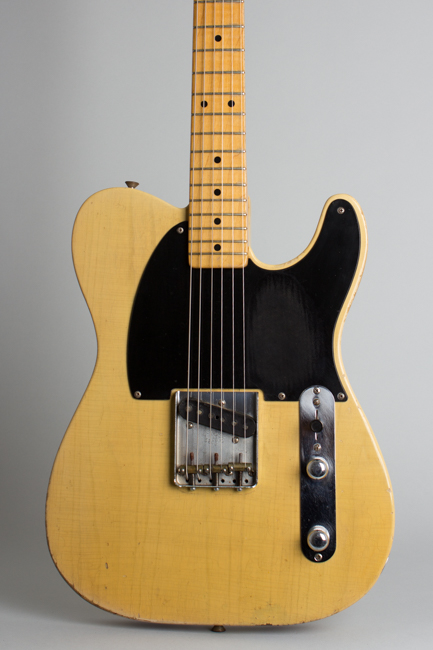 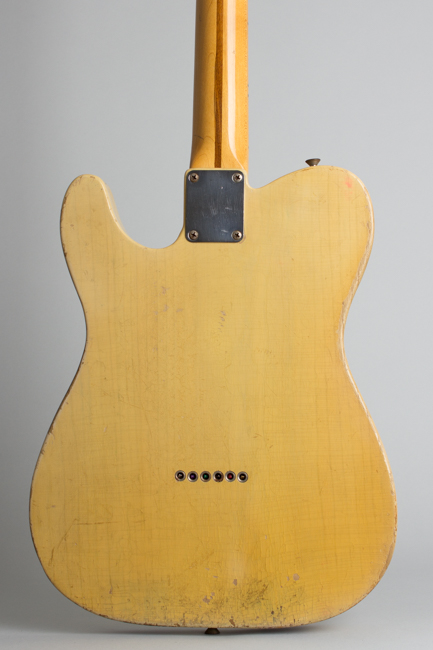 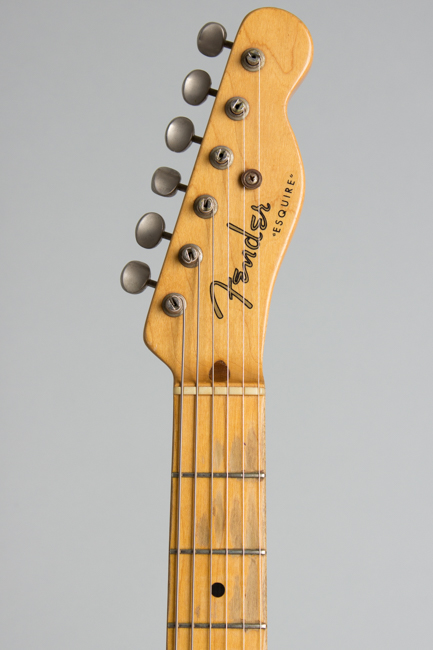 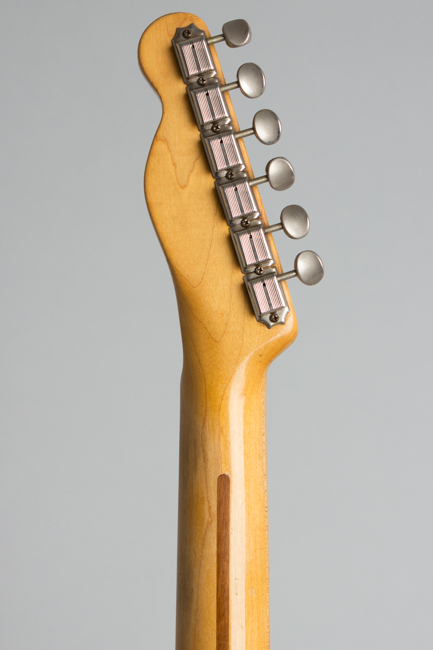 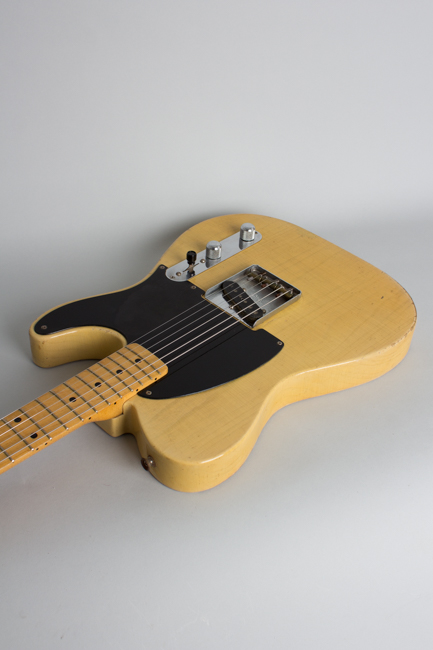 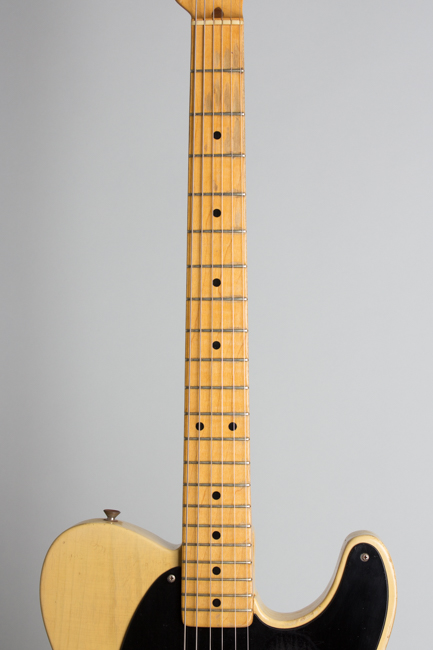 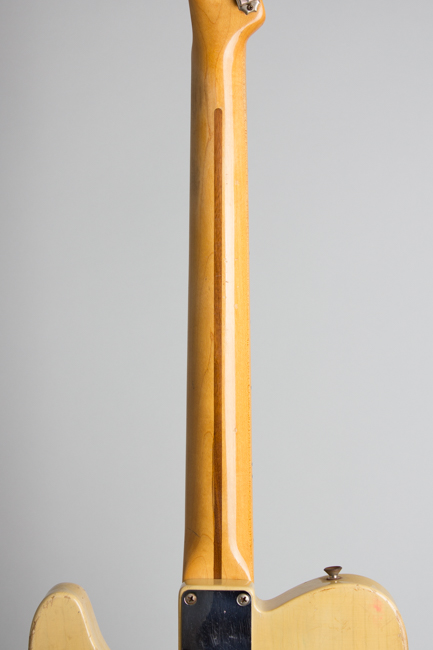 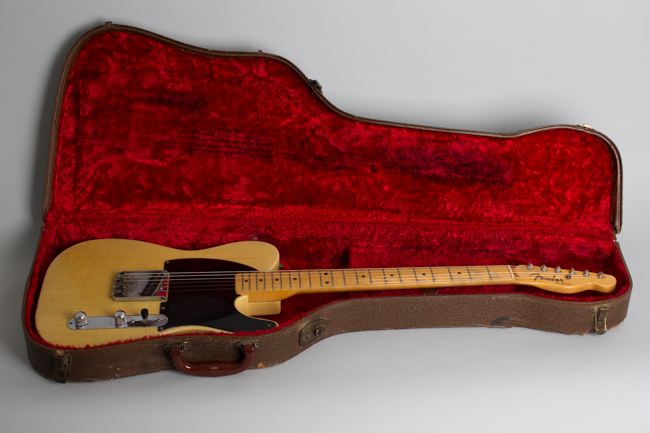 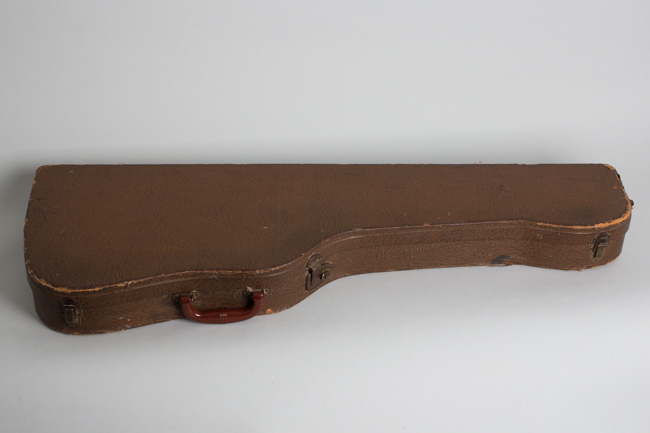 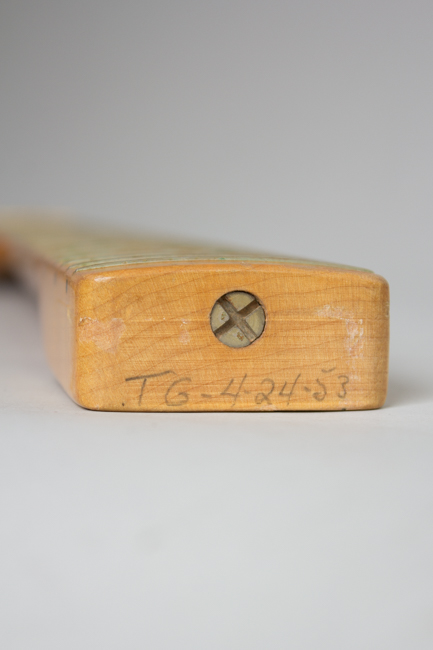 This is a truly beautiful and generally well-preserved original "Blackguard" Fender Esquire, the rarer single pickup version of the company's classic Telecaster. These instruments changed the fretted world in the early 1950s by establishing the solidbody electric guitar, putting Fender on the map for all time and forcing other makers to respond. Although they were a less expensive option Esquires were made in smaller numbers than Telecasters and fewer survive in original condition today.

This is one of the nicer early 1950's examples we have ever seen. It was assembled at the company's old metal-shed factory in Fullerton, Californian the spring of 1953. It has all the classic '53 Tele features: the one-piece maple neck, aged "butterscotch" blonde-finished ash body, lacquered black fiber pickguard, brass bridge saddles, and of course the original flat-pole bridge pickup with a sound for the ages!

This guitar carries serial number 5239 stamped into the bridgeplate, with a neck date of 4-24-53 in pencil on the heel alongside the initials of Fender legend Taddeo Gomez. The base of the heel is marked "ESQ" in pencil to remind the crew to put the proper decal on! The body carries a date mark of 4-9-53 in the neck cavity with Eddie's name penciled in large letters above. "Esq" is penciled on the top under the pickguard as well; this told the assembler not to drill the neck pickup mounting screw holes, as indeed was never done on this body. The basic components for both guitars were the same, so we always like finding these factory Esquire designations inside!

The potentiometers carry blue ink stamps showing "304" for the supplier Clarostat; one date marking is mostly buried under a solder joint, but the other is visible as 2-20, indicating the component was made the 20th week of 1952. There is a piece of masking tape in the electronics cavity showing the assembly was wired up by Mary on 4-23-53. This is interesting as it pre-dates the neck date by a day, showing that pre-wired bodies were being stocked and got ahead of neck fabrication at the time. Perhaps some Esquires were unexpectedly ordered and had to be put together quickly! Fender production was reportedly somewhat chaotic at this time, just before Forrest White came in as factory manager and re-organized the operation.

This guitar has been played but generally well cared for since it was shipped out in mid-1953. The early "Esquire" wiring rig with its plethora of wax caps and resistors is well preserved and still works as designed. The switch settings are a "deep bass" capacitor in position # 1; position #2 is the pickup in normal mode with the tone control engaged, and #3 is the pickup wired straight to the jack bypassing the tone control -- the "Esquire secret weapon" for the hottest tone setting on any old Fender. Think Jeff Beck in the Yardbirds.

The neck has a nice, round profile with a somewhat less chunky feel than models from the year before; a little more wood is dressed away on the sides than many earlier models. The screws are mostly Phillips-head types as is customary for 1953; the pickup adjustment screws are still slot head. For many, 1952-3 are THE classic Telecaster/Esquire years, with the same look and feel of the earliest Fender Broadcaster and "No-Caster" guitars from 1950-51, but more consistent production standards. Many of the fine details of the instrument continued to gradually evolve as the decade went along, but these "blackguards" remain the benchmark for comparison.

Before the introduction of the second Fender solid-body (the Stratocaster) in 1954, the Tele and Precision Bass were the company's most innovative and sensational products, and in 1953 were already causing a revolution in playing styles and shaking up the guitar world in a big way. At the time these guitars were totally unique in look, feel, and sound, and became instantly popular, particularly with country players. In the years since, many players and collectors have come to consider the early 1950s Fender solid bodies the finest electric guitar ever made -- and one of the most historically important as well.

This is a beautiful and very original guitar, overall nicely preserved its nearly 70 years on the planet. It has been played over the years so there is minor wear to the edges of the body, the fingerboard, and a some random dinks to the back of the neck. The body lacquer shows some typical light checking, but has not been nearly as darkened and "smoked" as many we have had and still retains a more original color.

There is one notable area of heavier finish wear. The guitar must have had very localized exposure to moisture at some point as the bottom edge of the body has a decent amount of the finish flaked away on either side of the endpin. This is mostly localized to the bottom edge of the body, with some lighter finish disturbance and minor flaking to the lower center of the back. Apart from this region the body finish has only relatively light play and handling wear.

The hardware is all original; there is a shallow wear spot to the lacquer on the pickguard below the strings from strumming. The bridge and tuners are quite clean for their age and show only very minor corrosion except for tips of two of the bridge length adjustment screws. There is minor wear to the plating on the control plate, mostly on the forward area. The all-important pickup and wiring components are original; it looks as if a couple of solder joints (notably the ground from the jack to the tone pot can) were re-done at some point. The pickup leads to the switch appear untouched, indicating the pickup has never been out of the guitar.

The frets are the correct small wire and appear original; there is enough finish chipping around them we cannot absolutely verify this but if the guitar was refretted it was a long time ago with the EXACT correct wire and technique, which would be very uncommon. They currently have been crowned down just slightly in the lower positions and still play well. The fingerboard has typical wear through the lacquer in the lower positions and on the edges but no heavy divoting.

It almost goes without saying this is an exceptionally fine playing and sounding instrument, as virtually all of these are. It is quite light for a Blackguard at 6.73 lbs. and very handy, superbly resonant even unplugged. This guitar came with a story that it was walled up in a closet for a couple of decades and only fairly recently unearthed; we cannot verify this for sure but it's a good tale anyway. The original Fender "poodle" case (flat on the bottom edge) is still intact with some external wear and tears to the cloth covering, mostly along the bottom edge. These cases are more typically seen with 1954 models but this guitar snuggles right into it looking like they have always been together. Generally Excellent Condition.
×