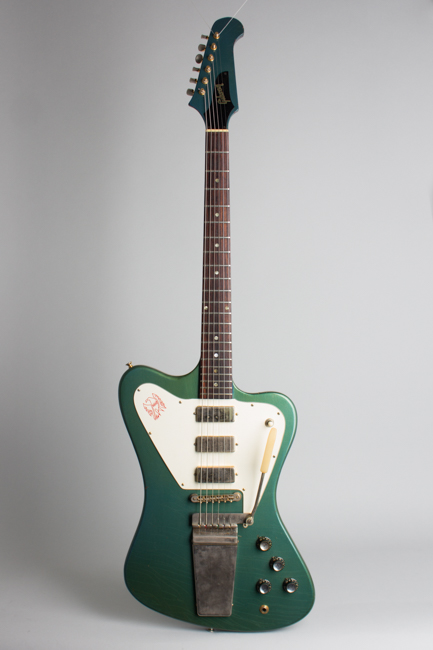 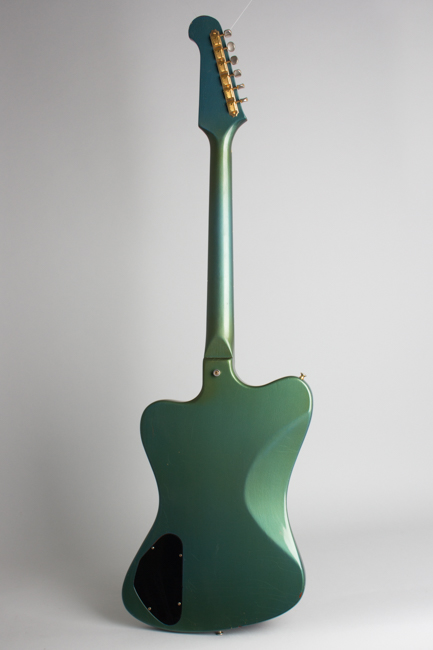 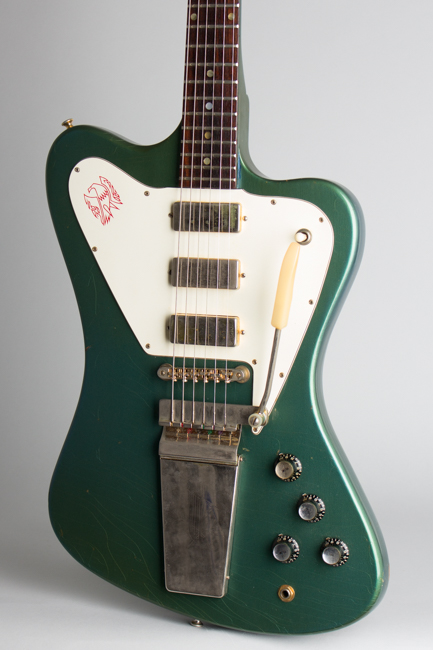 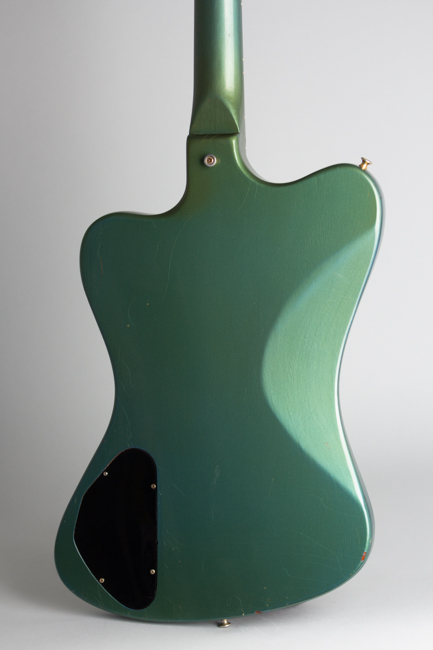 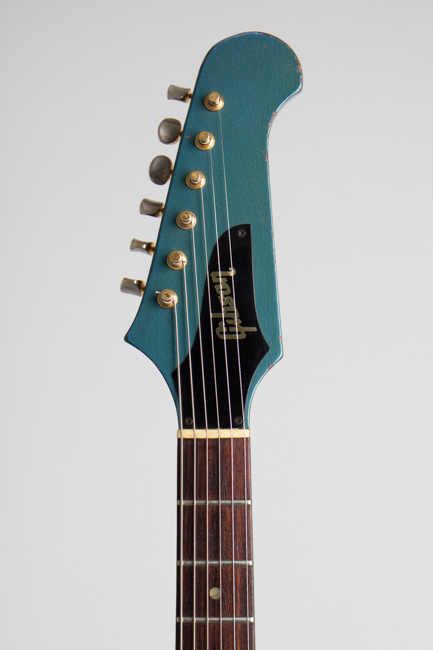 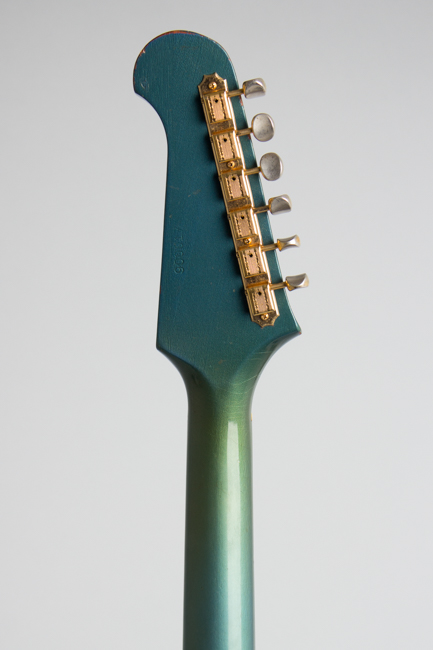 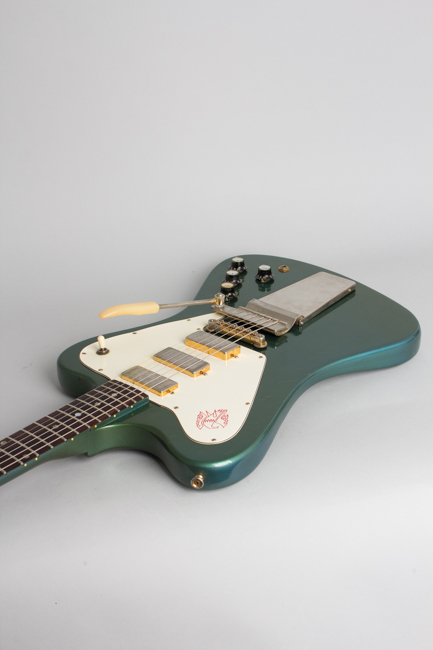 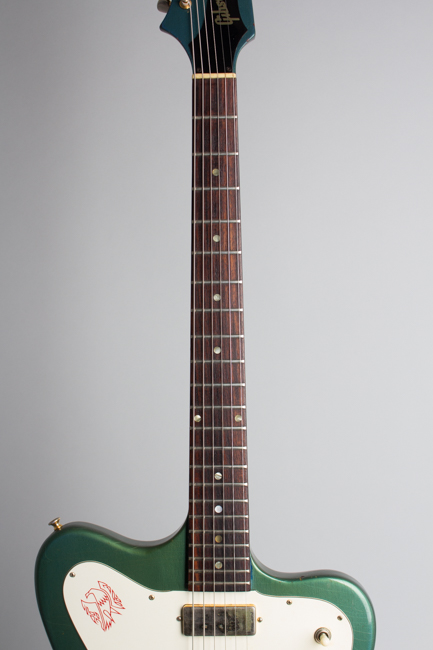 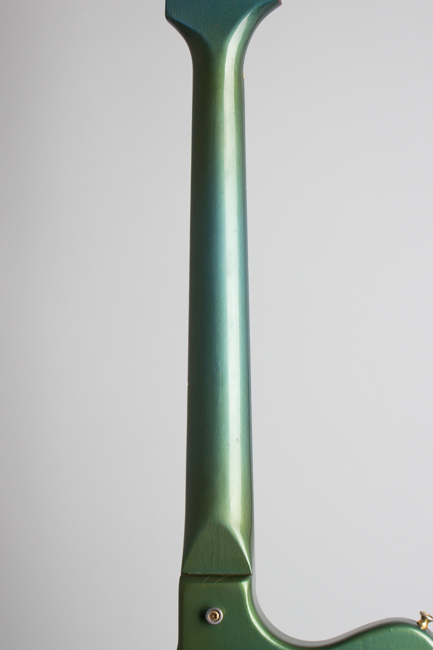 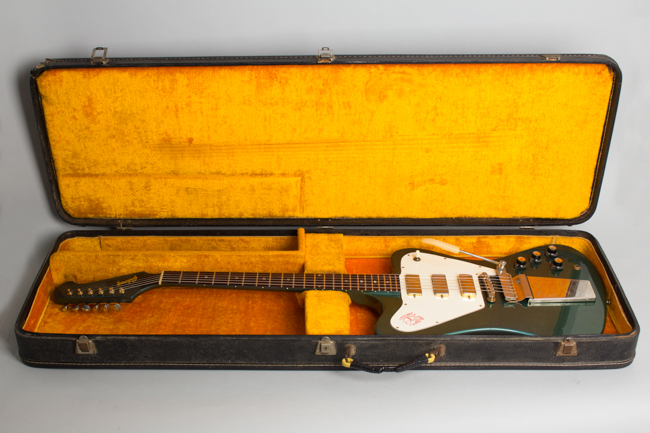 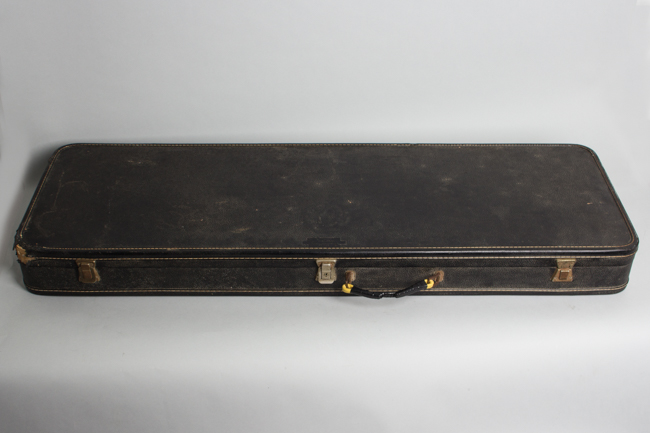 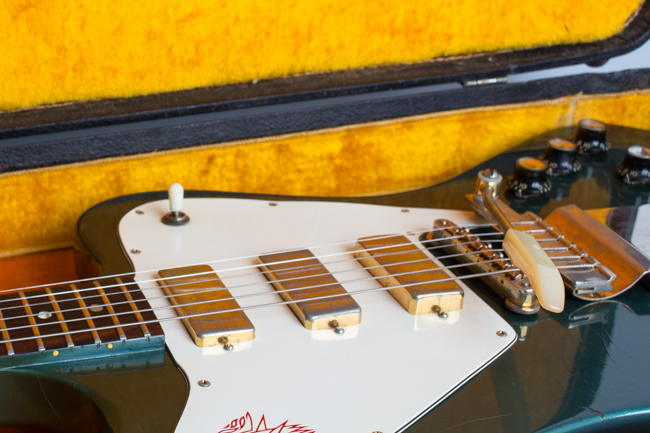 This simply striking solidbody is THE rarest stock variant of Gibson's 1960s Firebird family...a Custom-Color "non-reverse" Firebird VII. This model was the top of the line of simplified second series of Firebirds which replaced the earlier "reverse" body guitars starting in summer 1965, and was made in only very limited quantities. As the bodies were made with the opposite offset pattern, done in a more conventional angle they were dubbed "non-reverse" in the 1970's, which has confused novices ever since! These second-try Firebird models were lower-priced, easier-to-build versions of the earlier "reverse" body Firebird series guitars. They were available through the late 1960s in dwindling quantities, but were never really a sales success.

This simply stunning example of the top-line Firebird VII is finished in a superbly preserved Pelham Blue Metallic, one of the special custom colors advertised for the Firebird line but in practice not often ordered. Gibson lore holds that most dealers simply ignored the special Firebird color chart brochure Gibson helpfully provided, as they were interested in selling stock models off the wall. "If you've got a red one, they want a blue one" was the complaint, and whatever the truth, the solid color guitars are exponentially rarer than the standard sunburst models.

While still carrying three mini-humbucking pickups and gold-plated hardware, this second edition Firebird VII was not fitted with other deluxe appointments like the bound, block-inlaid ebony fingerboard of the earlier version. While still top of the Firebird line, the VII was a less fancy-looking guitar than the earlier rendition -- or the top-line SG Custom -- despite a fairly high price tag. As usual the plainer models were the better sellers, but in the cast of these later Firebirds the difference is even greater than other Gibson lines.

The Custom finish puts this one in a whole other category beyond that, although this model was ordered in miniscule quantities in ANY finish. Only 79 total Firebird VII's shipped after 1965 and the listed total is 110 for that year, at least half of which were likely the earlier reverse model. The non-reverse VII was made in much smaller quantity than other oft-quoted Firebird rarities like the reverse VII (around 250), non-reverse XII (272), and reverse I (over 1,000). All of 19 FB VII's are listed as shipped 1968, in ANY finish, and custom color examples of this model are almost never encountered today.

Under the metallic lacquer this Firebird VII has a one-piece mahogany body with a standard glued-in neck, a design far simpler to build than the earlier laminate neck-through-body Firebird design. The pickups are mounted directly to the pickguard, which was also far easier to assemble than the earlier design. The hardware is all gold plated and includes Gibson's "long" Vibrola unit with a plastic-tipped handle and the Tune-O-Matic bridge. Gold-plated Kluson Deluxe strip tuners adorn the headstock, a seldom-seen fitting.

The Firebird VII is particularly distinguished by offering not two but three gold-plated mini-humbucking pickups, an unusual combination only otherwise available on the Gibson-made 1960s Epiphone Crestwood Deluxe and hollowbody Emperor, both also extremely rare models. Besides its killer looks this is a great-sounding guitar, the still-powerful mini-humbucking that have plenty of clarity at lower volumes but really growl when cranked. The three-position Switchcraft pickup selector switch is original on this example, and much more functional than the cheap slider used on many earlier 'birds. The settings are typical for three-pickup Gibsons, with the neck and bridge available alone and a bridge/middle selection in the center position. This has an almost "Stratty" snap even with Firebird pickups, and is a tonality virtually unique to this model.

Visible pot codes on this particular guitar date to the 39th week of 1965 but the serial number suggests shipment was not until 1968, although Gibson numbers are often rather dodgy in the late '60s. The knobs are older the style with a metal cap used mostly from 1961-67, not the later "Witch Hat" type more often seen in '68. The neck is narrower than earlier reverse Firebird necks, but still has a nice feel not quite as insubstantial-feeling as period SG necks.

While the "non-reverse" Firebirds used to be discounted in Gibson history, they have risen in status as time marches on and are now regarded as something of a lost classic. Taken on their own merits these are very distinctive guitars quite unlike any other and excellent instruments with their own sound and feel. Extremely light, fast, and very stylish, this super-striking custom-color Firebird VII is a stunning example of this exceptionally rare and oft-underappreciated Gibson model, an unrepentant rocker's guitar yet still with a classy hot-rod look.

This is a truly beautiful 'bird overall, showing some light play wear but no major damage or repair. There are NO headstock or control cavity cracks, which unfortunately are very common with these instruments. There is some typical light checking to the Pelham Blue finish with small dings and rubs in spots, but only one spot worn down to the wood on the lower side at the apex of the treble bout. The blue hue has "greened' somewhat in a typical fashion as the clear lacquer overcoat ages, it is now a very attractive aqua-tinged color. The patina is lovely with a subtle sheen; as these Custom color Gibsons go this is a very well-preserved instrument.

The gold plating was quite thin on these and it has worn down to the nickel undercoat on many of the commonly-handled surfaces but all hardware remains original and unaltered. The original frets show hardly any wear and the guitar plays very well. The original pickguard is AMAZINGLY well preserved, showing none of the typical shrinkage cracks by the screws, and even the bird emblem remains completely intact. Overall this is simply a GREAT looking and sounding Firebird, resplendent in its fantastic Pelham Blue livery still in its original yellow-lined HSC. Excellent Condition.
×