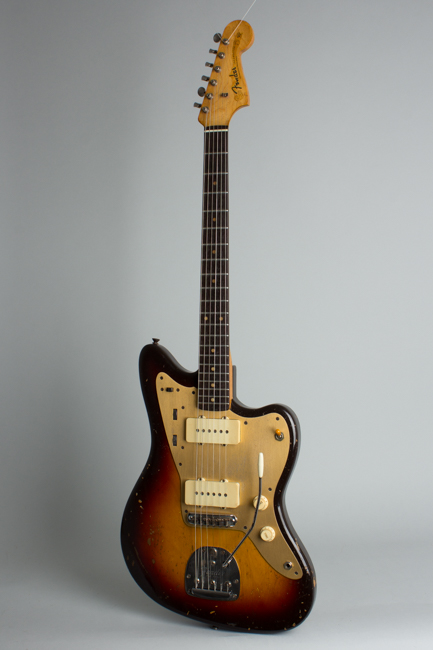 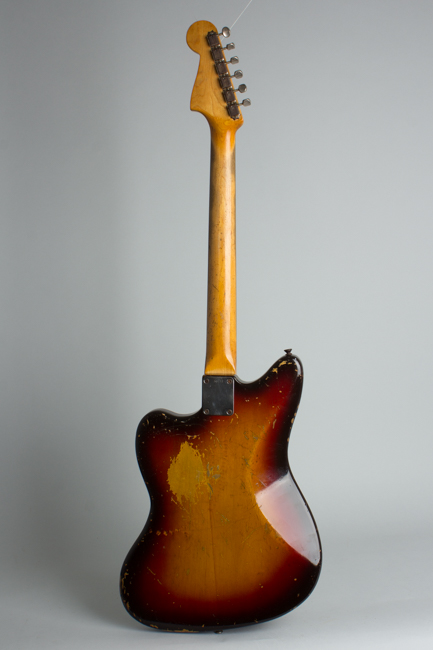 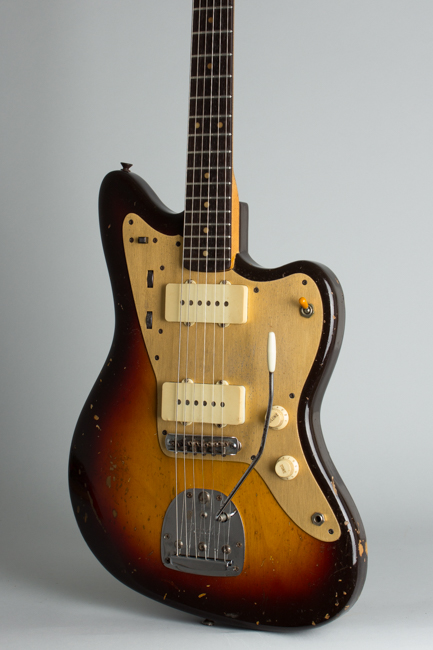 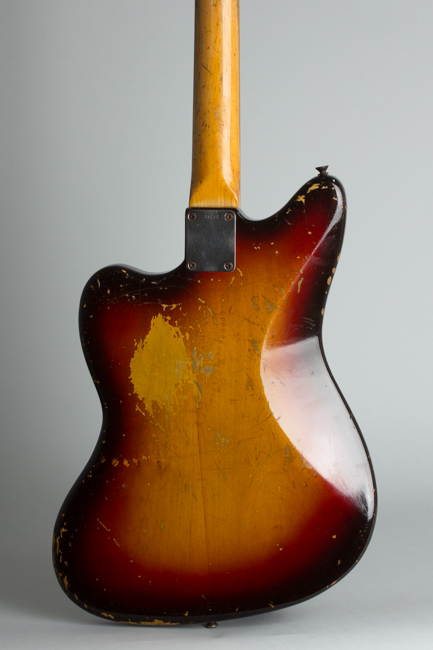 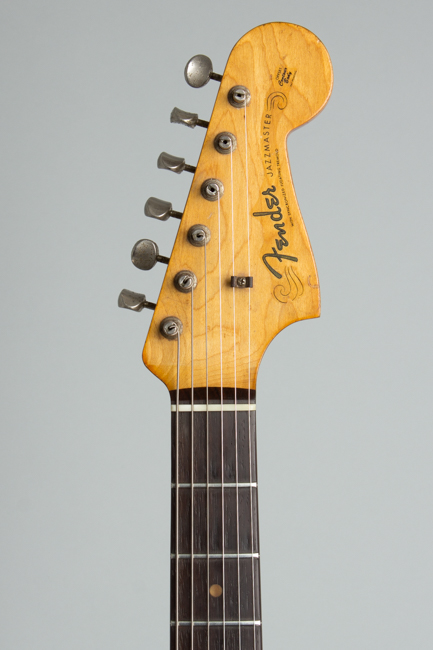 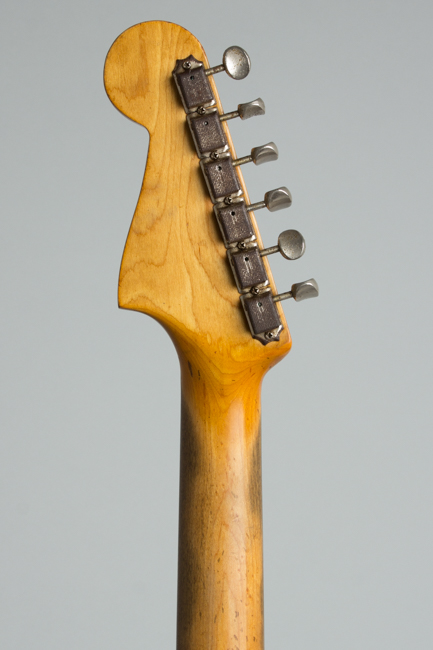 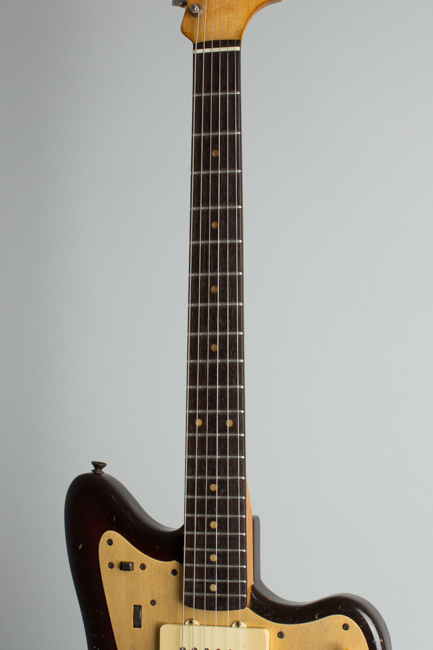 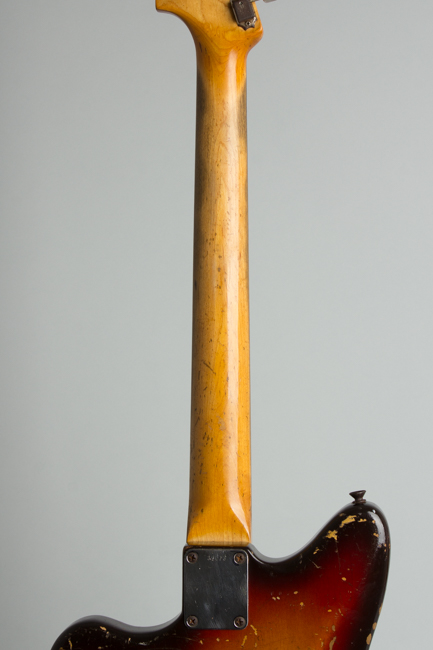 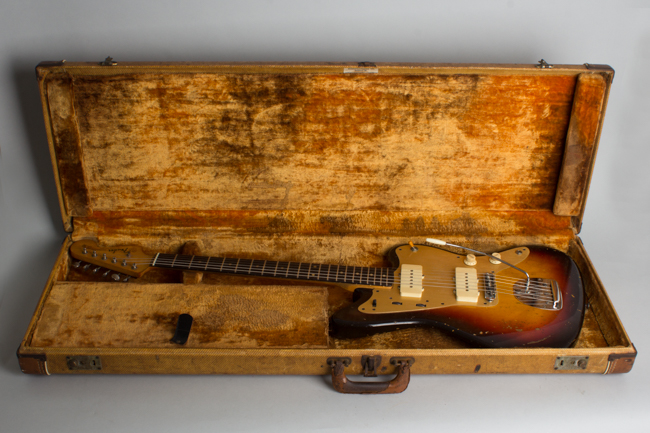 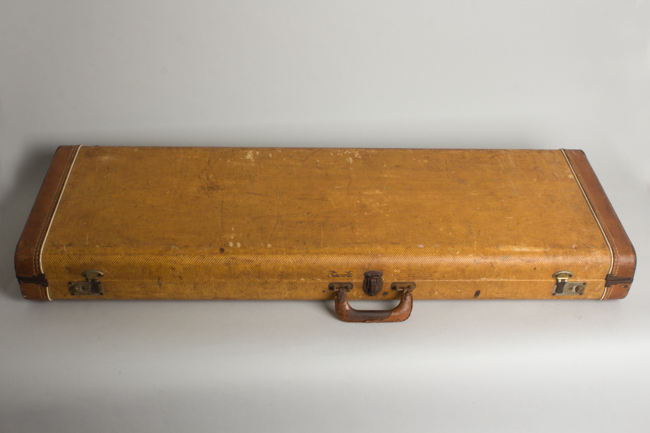 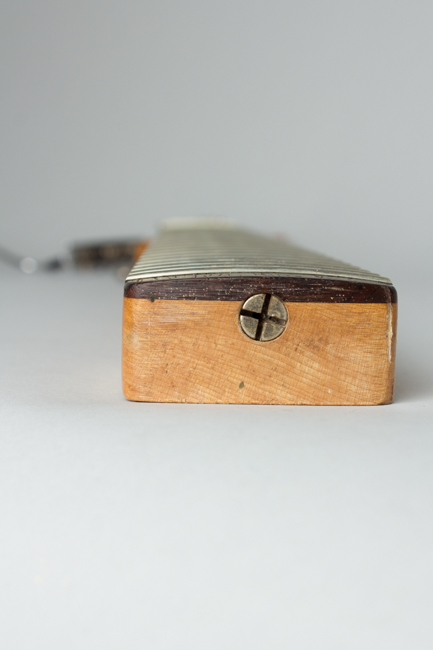 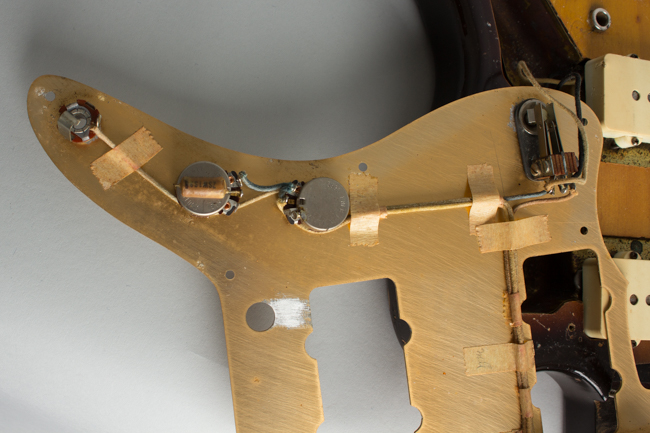 This is a lovely and well played-in early Fender Jazzmaster, with a beautiful deep 3-color sunburst and the classic gold anodized pickguard that marks the earliest versions of the model. There are no pencil dates in the guitar; hand-dating the neck was temporarily stopped at Fender in spring 1959 and not resumed until the next year. The latest pot code in this guitar is the 16th week of 1959, indicating it was assembled in the late spring/early summer of that year. Th anodized pickguard was replaced on the Jazzmasters with the familiar tortoise celluloid piece by late summer the same year.

When this example was made, the Jazzmaster was still a relatively new model, in production for well under a year as Fender's top of the line guitar. Novel features like the patented "offset" body, rhythm/lead circuit wiring, floating bridge and tremolo, and wider-coil pickups were all news to Fender users, even if they failed to entice dedicated Gibson players to change over to Leo's products. The "slab" rosewood fingerboard was also introduced on this model, and soon became ubiquitous across the entire fender line. The Jazzmaster was an instant hit, and remained very popular into the mid 1960s but lost much of its appeal as playing styles changed later in the decade.

When this was their new prestige product, the Fullerton factory lavished a maximum of care and effort on Jazzmaster production. We find these first generation "offsets" to nearly always be exceptionally fine instruments. Over the last 25 years or so the Jazzmaster, once maligned, has risen to be one of the most widely played of all vintage designs, and this is a wonderful early example. Used but never abused, this remains an exceptional-sounding and extremely attractive twang machine. This particular guitar has a great feel and a lovely "ring" to it, even when not plugged in.

This Jazzmaster shows a lot of wear overall but remains all original except for an older refret. The deep sunburst finish on the body has numerous dings, dents, and scrapes but the lacquer retains good color with very little fade. The neck finish has typical wear down to the wood on the back. The fingerboard has been refretted with wire slightly larger than the original, but not out of character for the guitar. It is a well-done job and the instrument plays extremely well. This very fine "Genuine Relic" Jazzmaster has seen a lot of use but has survived with its original sound and character fully intact, still housed in a very nice original tweed HSC. Very Good + Condition.
×