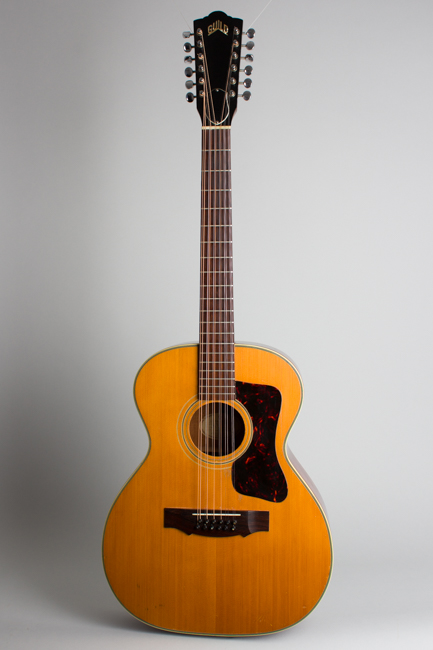 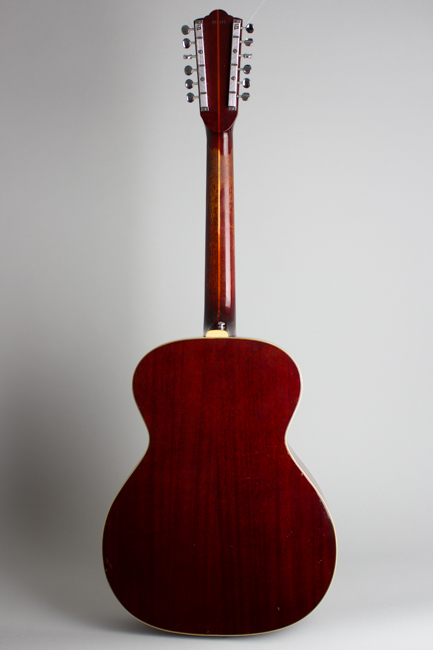 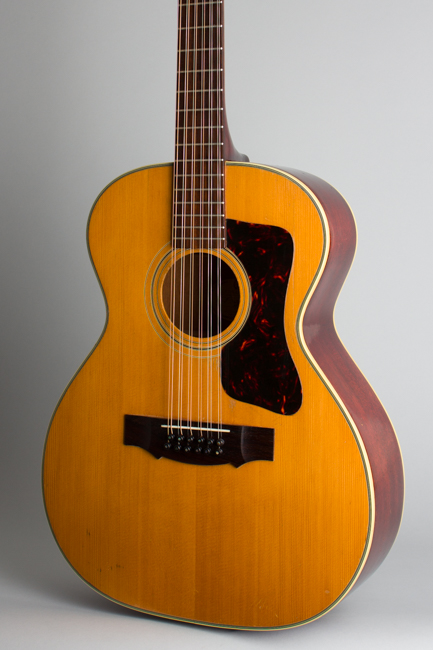 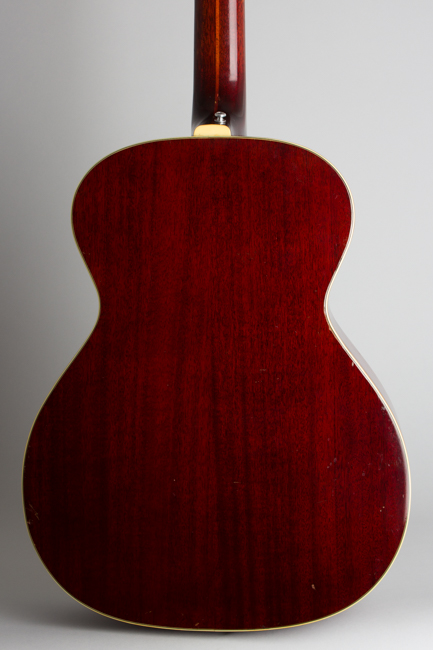 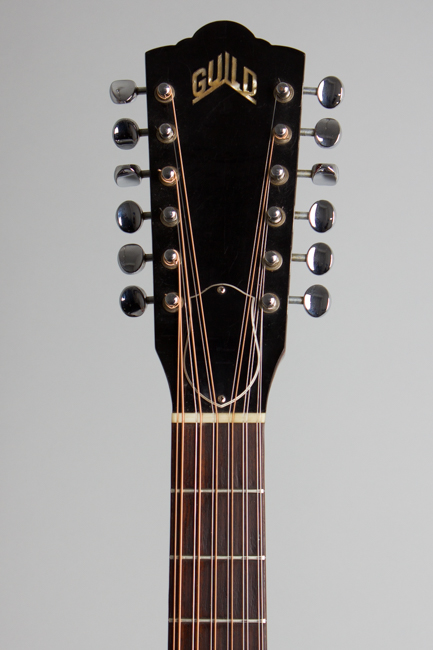 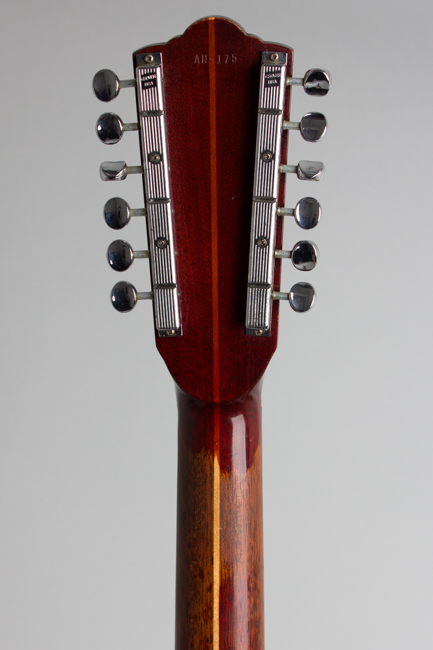 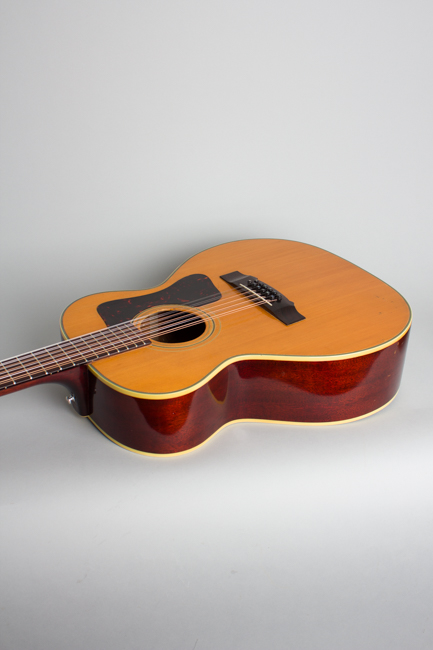 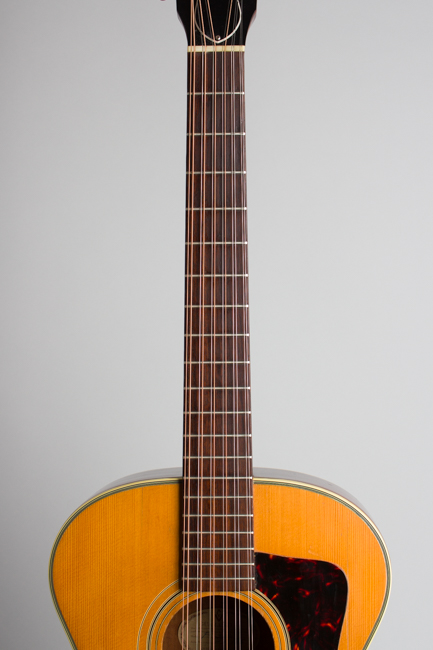 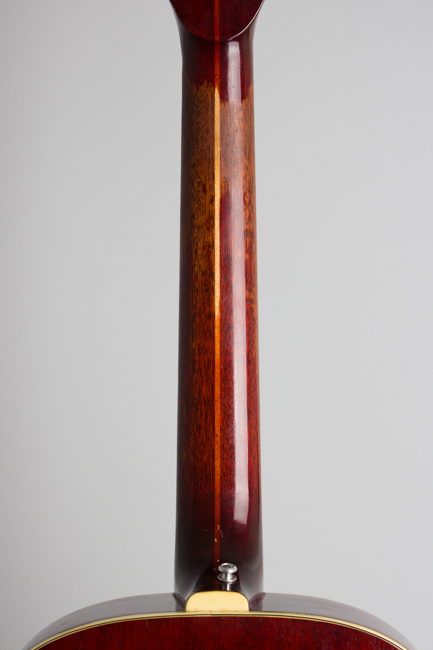 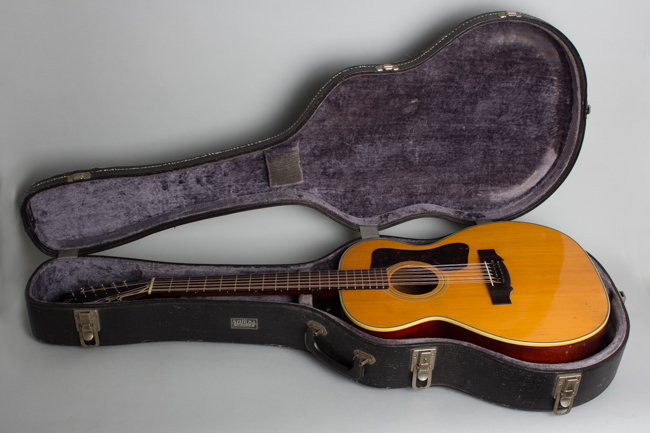 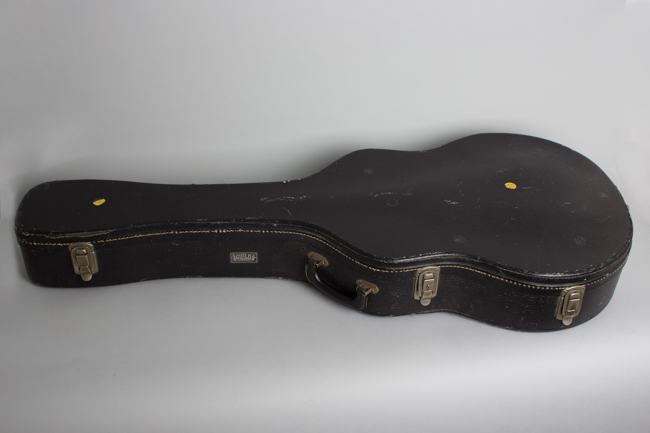 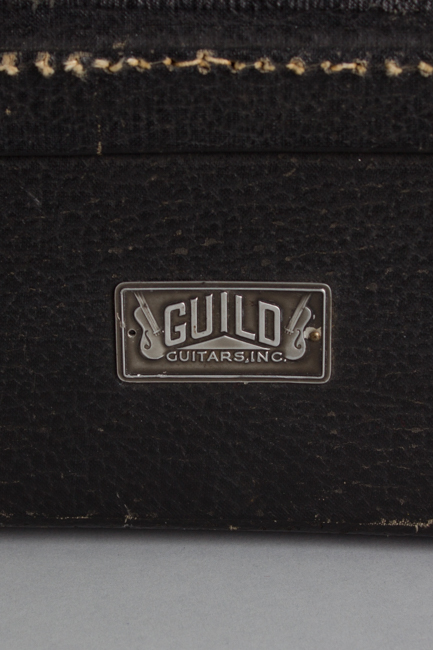 The Hoboken-built Guild F-212 is generally considered to be one of the best of all postwar 12-strings made, and certainly a standout of its era. The not-quite 16" mahogany body and X-braced spruce top combine to produce a big, warm yet bright sound with plenty of ring. The big, wide mahogany neck with a center maple strip lamination and unbound rosewood fingerboard is quite comfortable and is built with an unusual double truss rod system that works quite well.

This is a fairly early example of the model, which was introduced in 1964. The very first F-212's have a flat radius fingerboard (like an old Stella!) but his second-year example has a slightly radiused board most players find more comfortable. Another quirk of early Guild 12-strings is the fingerboard has no position markers; it does have small side dots. The top is multi-bound in white/black celluloid, with a large shaped rosewood bridge and a tortoise celluloid pickguard in the typically distinctive Guild shape.

The F-212 was a world standard acoustic 12-string when new in the 1960s, and still remains so today. It was one of Guild's signature instruments of the decade, associated with many artists of the era and has remained a classic ever since. This one is in a better state of preservation than many, plays excellently and has a powerful but still transparent sound.

Overall this is a nice example of this classic 12-string, showing some old repairs but not too much in the way of play wear. The finish has dings, scratches and dents overall but nothing too serious; there is a small isolated area of pickwear into the wood around the back edge of the pickguard. There are two sealed spruce grain cracks to the top; one just below the forward edge of the pickguard and another off the front edge about an inch above the fingerboard. Both are well sealed but not touched up and so visible. The area behind the bridge and the back and sides are crack-free.

The neck had been reset, a notoriously difficult procedure on these. The angle is good, there is a crack across the base of the heel that is no doubt the result of this procedure. It is solidly sealed with some topical touch up but visible, with a strap button added above. The back of the neck has some wear down to the wood but no notable dings or dents. The bridge was reglued and lowered slightly at some point, possibly before the neck set was done. The tuners were originally open back Waverly strips, the guitar is fitted with c. 1970 Grover Slimline machines as used on Martin 12-strings of that time. These are heavier than the originals but no doubt work better!

Overall this is a fine-playing and sounding example of this often-requested model. As found today they nearly always either need or have had a neckset to be playable to a modern standard. This is not the cosmetically cleanest such job we have seen, but is solid and makes this a very user friendly jumbo 12-string guitar. The original case is also present, externally just a bit worn but also completely solid. Overall Excellent - Condition.
×