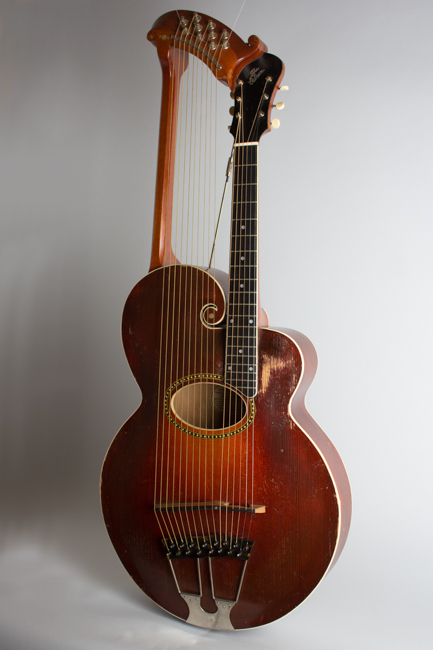 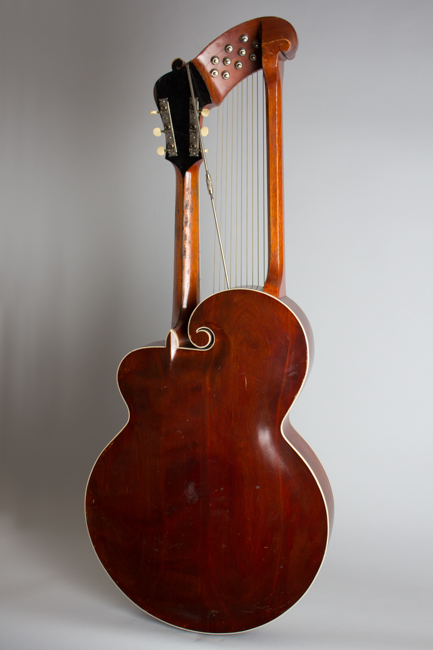 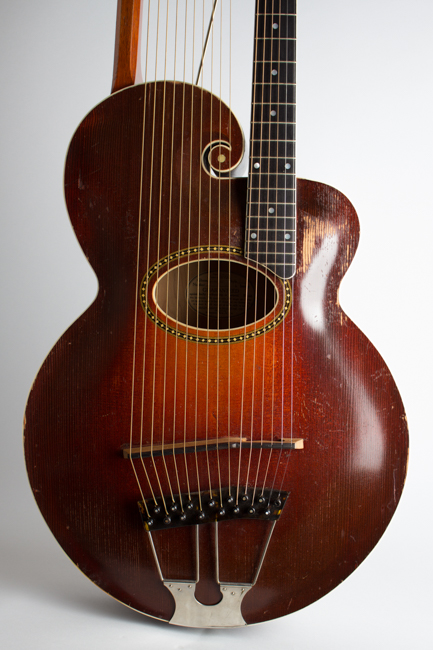 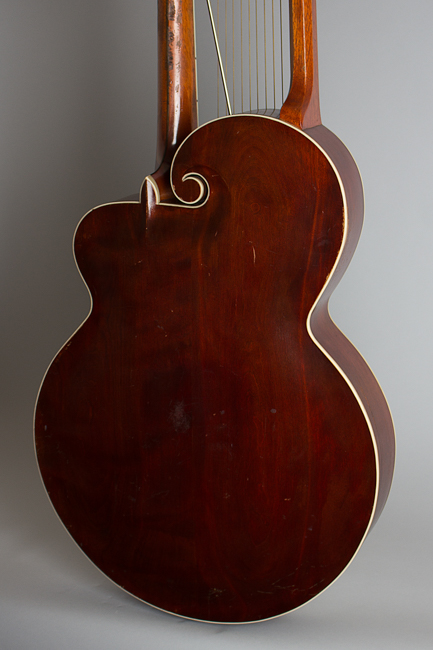 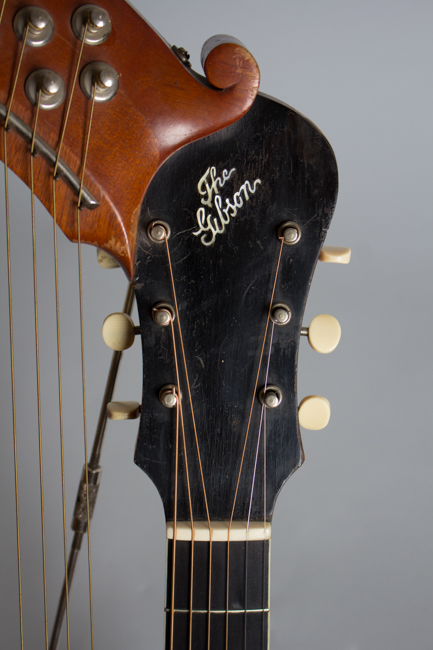 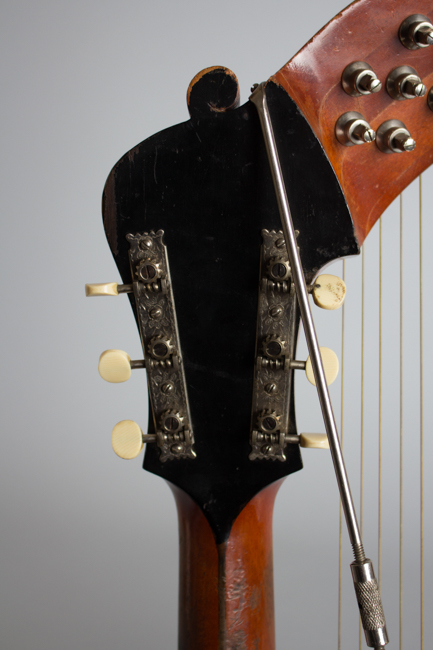 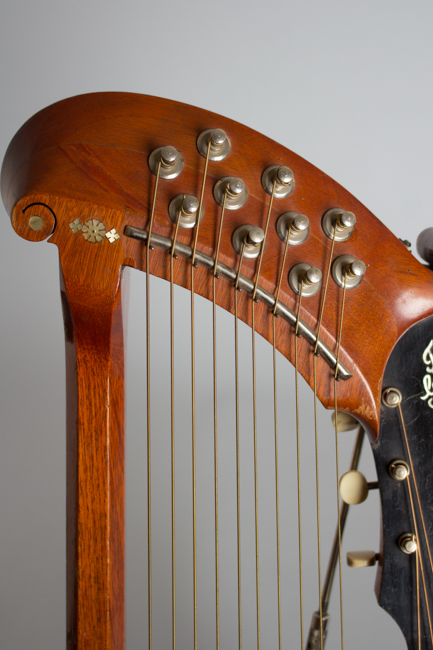 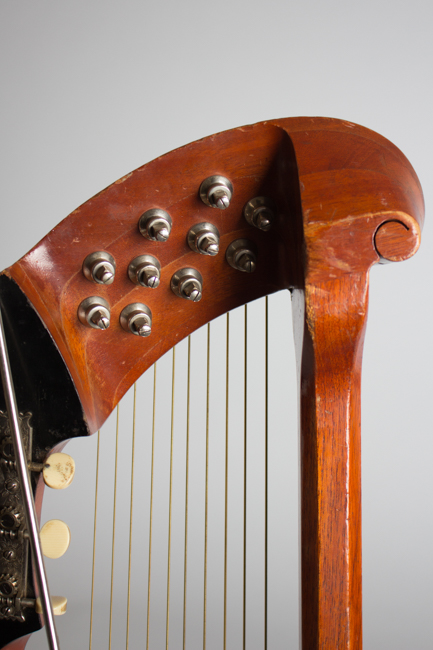 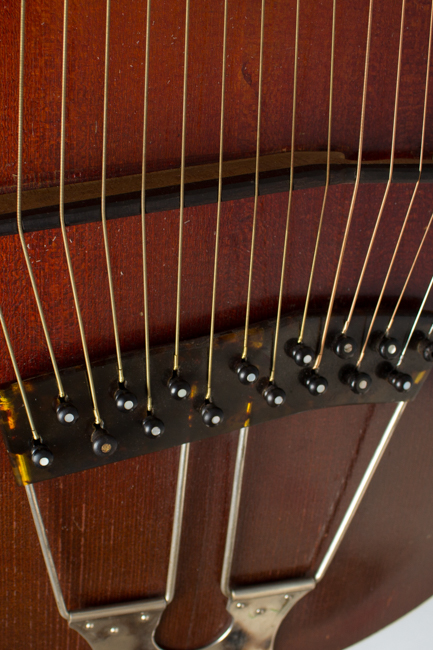 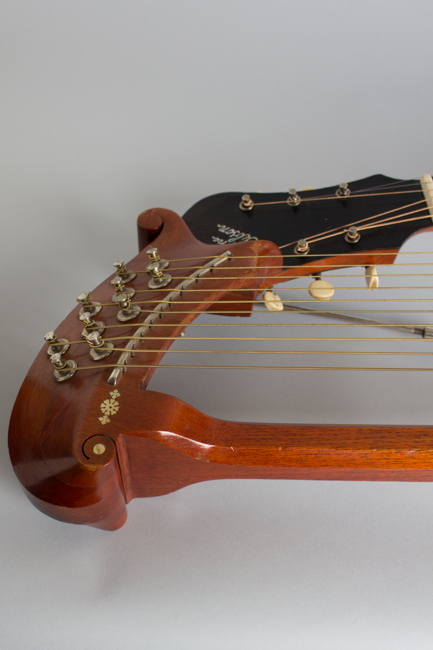 Of all the greater glories of Gibson, the Style U harp guitar is one of the most impressive -- visually, at least! For many years this multi-string behemoth topped the company's line, providing sonic underpinning for the mandolin orchestras that were the main outlet for Gibson products. In the 1900s "aught years", the Gibson company was full of new ideas, being the most radical and successful instrument innovator of the time. They offered several styles of harp-guitar from their beginnings in 1903, but soon settled on this one model -- the Style U.

While in 1917 guitars were still less important sales-wise to the company than the mandolin family, they made considerable advertising capital out of the harp guitar, certainly their most impressive looking instrument. It typically got a double-page spread in the catalogs, described as the "elevator to success" and the "piano" of the guitar world, all others being now "harpsichords" and doomed to extinction. In 1917 this guitar and the best hardshell case were offered at a "net" price of $161.50.

For their Style U masterpiece, Gibson used their at-the-time proprietary hand-carved arched top on an 18 1/2" wide asymmetrical oval-hole body with a long solid arm extension above the neck carrying the tuners for 10 sub-bass strings on a large curved wooden block. These strings were intended to be tuned chromatically down from G#; a very different practice from most others. This system was credited to Walter A. Boehm, "one of the most competent Harp-guitarists in America" as per the company.

Gibson's ads enumerated the advantages of their harp-guitar against "the best of the old construction", i.e. a flat top. "Long sub-basses are retained to give bigness of the foundation tones" offering "An open bass for every chord...eliminates long reaches...the flat keys...as easy as the favorite keys" and concluding with "Write for Harp-Guitar treatise", which presumably explained how to play the instrument.

This Style U has typical features for the period, with a bound red sunburst finished top on the red-finished birch body, high maple bridge with an ebony cap, and a very elaborate tailpiece with two trapeze sections but a single celluloid pin block to hold the strings. The neck is big and chunky with a heavy "V" profile and a bound ebony fingerboard. The sub-bass array are tuned with a zither-style wrench, which fortunately is still present in the amazing original hard case.

While the Gibson harp-guitars are not generally considered the sonic equals of the Larson-built Dyers that were their primary competitors, the Style U is one of the most visually impressive and imposing fretted instruments ever made, and does have a sound all its own. This one is set up to play (although you'll have to figure out how to use the harp strings yourself!) and despite some cosmetic wear is the best example of this glorious beast we have ever handled.

Overall length is 46 in. (116.8 cm.), 18 1/2 in. (47 cm.) wide at lower bout, and 3 1/2 in. (8.9 cm.) in depth, measured at side of rim. Scale length is 24 3/4 in. (629 mm.). Width of nut is 1 3/4 in. (44 mm.).
Well past its 100th birthday, this Style U shows some use but is relatively well-preserved overall. There are no major cracks or repairs, which is very unusual for this model where a multi-laminated heel block makes neck heel cracks almost ubiquitous. All hardware is original and complete except the pickguard is long gone, resulting in some fairly heavy pick wear to the finish in the area it originally covered. There is a small patched-in area of veneer at the tip of the headstock.

Everything works as intended and the harp section is strung and tuned as per Gibson's 1917 pattern, in a chromatic array from G# down to B. The ebony bridge had been subtly re-contoured to make the action more friendly to a modern player, and this is a very playable guitar -- if you have the reach to hold it, that is! It is still complete with the enormous HSC it was born into, a fantastic Art Nouveau survivor and an absolute centerpiece for any fretted collection! Excellent - Condition.
×