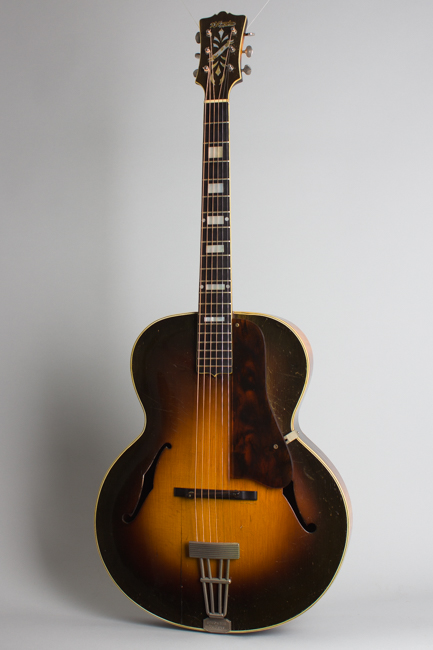 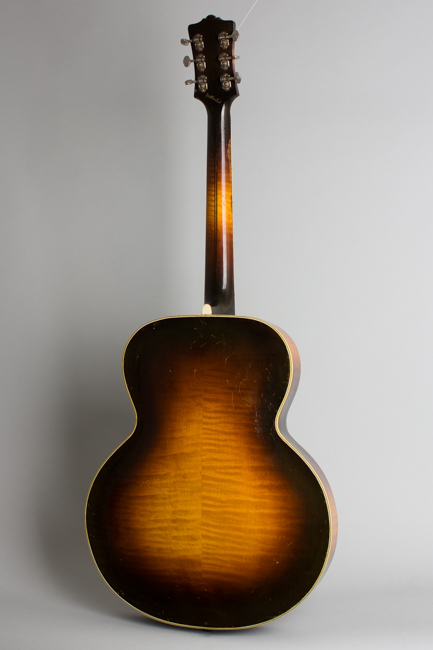 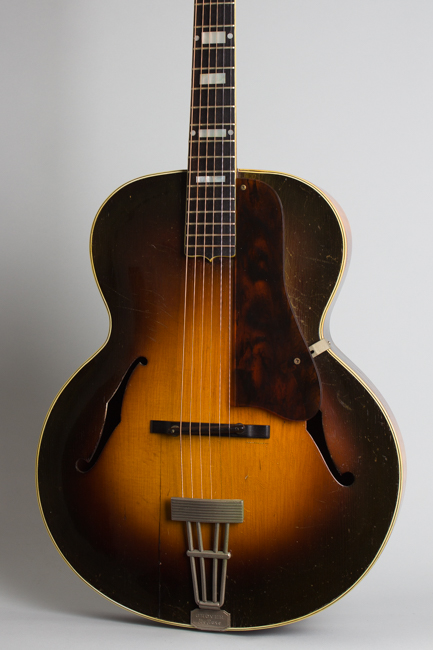 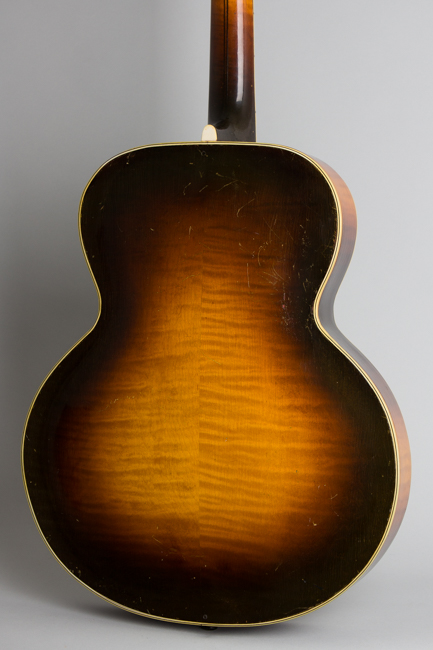 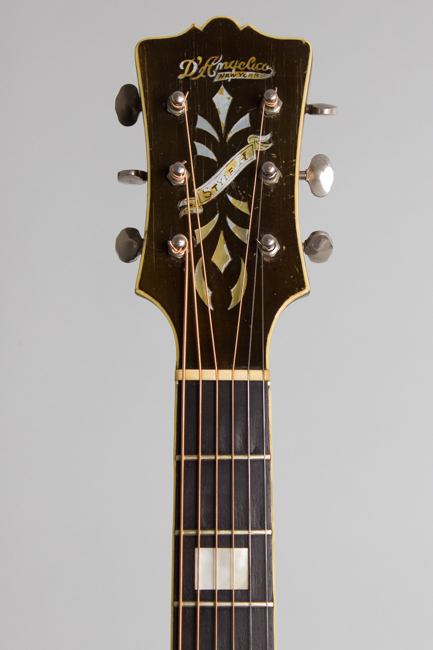 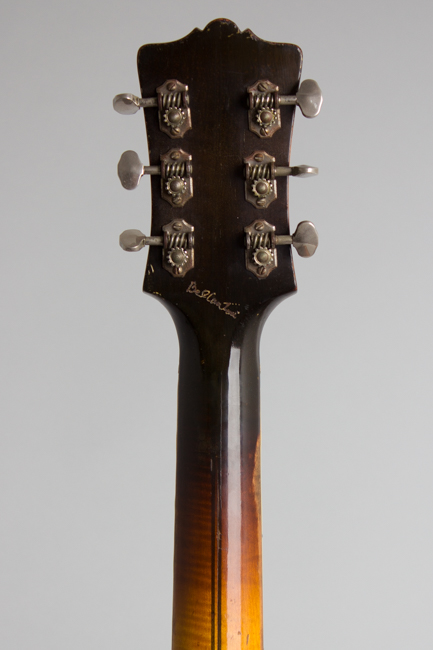 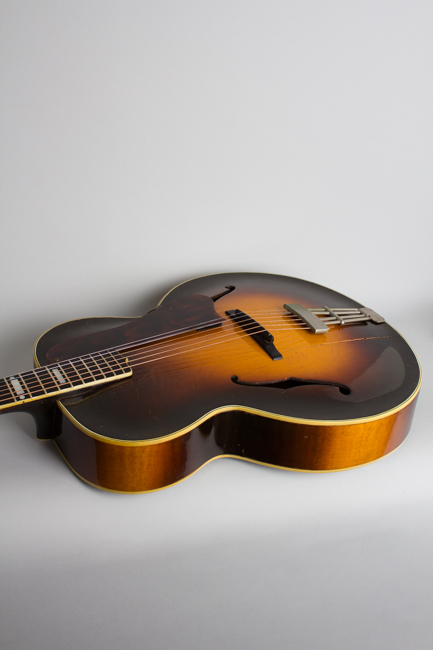 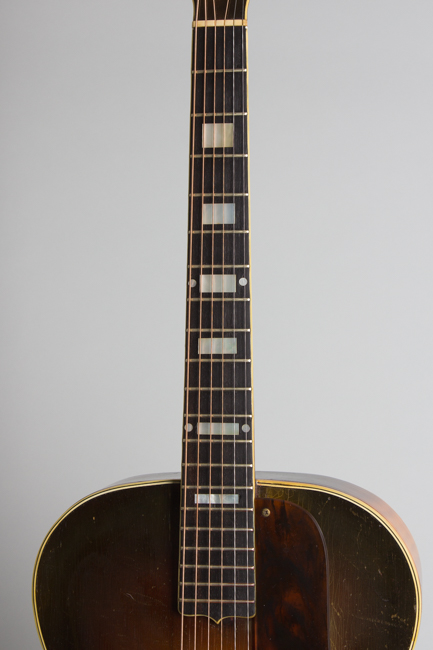 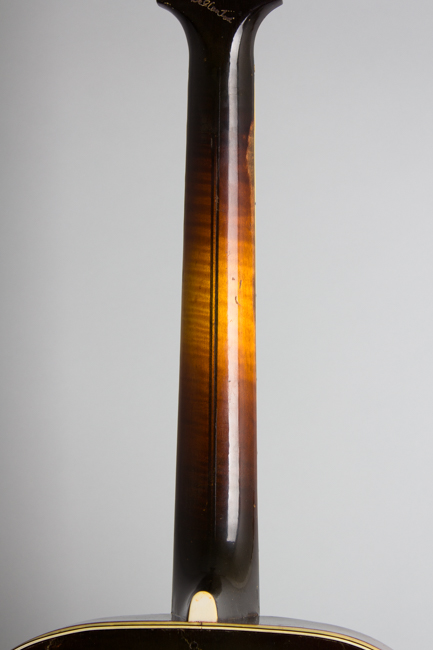 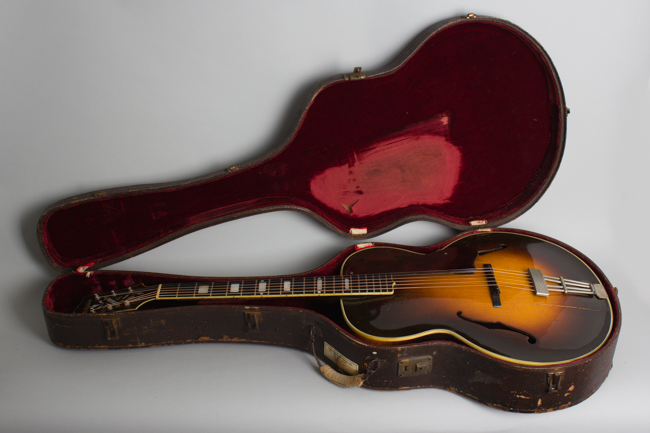 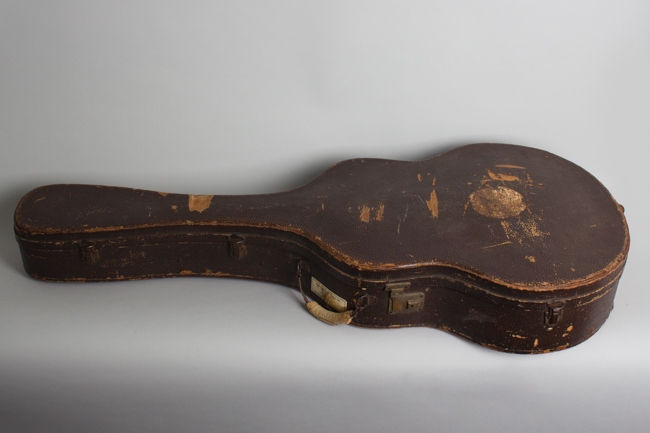 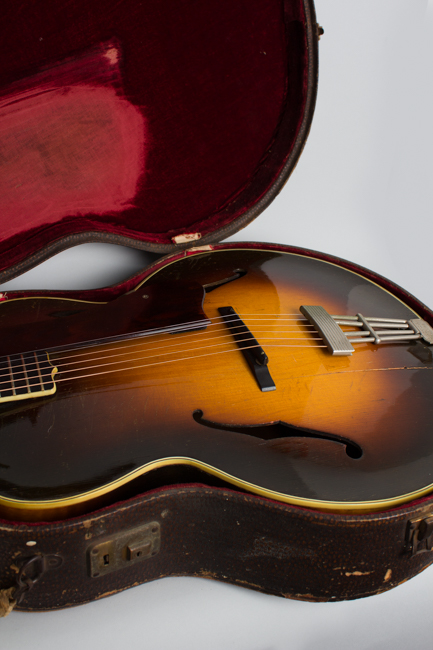 This lovely instrument is a D'Angelico Style A built in 1936, a time when John was still codifying the exact forms his instruments would take. It has seen wear and repair over the decades but remains a superlative instrument. D'Angelico experimented with design elements in this period but never cut corners on workmanship, even on these less expensive models. The Style A was D'Angelico's lowest priced guitar, but was still built with the care and beauty that mark all his purely handmade instruments. Although not overly fancy, this is still a very handsome professional grade 16 5/8" body carved-top guitar from the era that saw the flowering of D'Angelico's talents as an archtop guitar maker.

The Style A and B models were designed to offer a lower priced alternative to the then-top of the line Excel; the 18" wide New Yorker was not first sold until the fall of 1936. This guitar was built in late 1935 or early '36; D'Angelico's records for this period are spotty. Its serial number 1167 is not recorded; the closest is #1169 which is noted as a Style B sold in January '36. The earliest recorded Style A is #1172, sold in March '36, but with many numbers unlisted it is impossible to say more than this is a VERY early example of the model.

The main distinguishing feature is a 16 5/58" wide body; Within the next year or so all D'Angelico guitars became 17" wide or larger, following the trend set by Gibson and Epiphone. This guitar is similar in size and body pattern to the 1935 Epiphone Triumph, its direct local competitor. Despite a more modest original price (probably $125) it is built with top-grade materials throughout, the same as the Excel. The top is tightly grained spruce, and the back and sides are figured maple, triple-bound in celluloid and finished overall in a beautiful blended sunburst. The top is carved relatively thin for a D'Angelico and is parallel braced, with unbound f-holes.

The neck is a 5-ply laminate of curly maple, with a very comfortable "C" profile and fairly narrow 1 5/18" nut width; it feels quite modern for its time. The bound ebony fingerboard has an unusual inlay pattern mixing pearl blocks and dots; this is the only one we have seen like this. The bound headstock has pearl inlay under the "D'Angelico New York" script logo in a sort of "fountain" pattern, around "STYLE A" engraved on a pearl banner. The tailpiece is a nickel-plated trapeze engraved "Grover Deluxe" on the baseplate; this is typical of the period before john had his own tailpieces made.

The guitar is still fitted with its original open-back nickel individual pre-war style Waverly tuners; it is fairly unusual to not have had these changed over the years. The bridge is John's original hand-carved ebony adjustable piece, the pickguard an old but later replacement for a likely disintegrated celluloid original.

The tone of this guitar is incisive, as Swing-era instruments needed to be, but with an overriding sweetness and balance that is the hallmark of a D'Angelico. Compared to more expensive and ornate D'Angelicos, this instrument still has a comparable sound -- indeed, some players have preferred the more basic models over the years. With wear and repair this could be described as a "player's" guitar; certainly that is what it was built for, and more than 85 years later it is still true. Like all John D'Angelico's instruments this is a one of a kind creation and despite its lower status in his line and eventful life is a truly inspiring instrument to play.

This venerable Style A has a some general play wear (though less than many) and one noticeable repair, but no alterations from the original specs. There is one large ancient and unfortunately sloppily sealed spruce grain crack on the top above the tailpiece, running from the back edge up to the bridge. This is solidly glued up, but the planes were not aligned properly when this was done leaving a noticeably uneven feel, with the upper half sitting slightly lower than the bottom half for part of its length. While this is a bit unsightly, it does not present any structural or playing issues.

There are no other cracks on the instrument; the back center seam of the neck has been resealed in several spots, polished out but not finished over. All of the finish is original; there is no overspray visible anywhere. The lacquer has typical checking (D'Angelicos have a very specific check pattern!) and shows dings, dents, and scrapes over much of the instrument. This is heaviest on the upper back and along the bottom rim on either side of the endpin. There is also a tiny screw hole centered there for no apparent reason. A name is neatly etched in script in two places; on the lower back of the peghead and the lower rim off the waist; someone did not want this guitar stolen!

A decent amount of the lacquer topcoat is worn off the back of the neck and there are spot down to the wood on the sides below the binding. It looks like the bottom half of a two-stage heelcap has gone missing. The guitar appears to have been refretted long ago, the frets are in character with the guitar and the period and are only lightly worn. The only non-original part is a later unbound pickguard in authentic celluloid close but not exactly to the original style. The tuners, tailpiece and bridge are original, the binding intact with no celluloid distress. While having had quite a life by the looks of it this is simply a lovely guitar to play, and to hear. It still resides in its original (or at least period) HSC, and as far as we know has not left the New York-New Jersey metro area since new. Very Good + Condition.
×