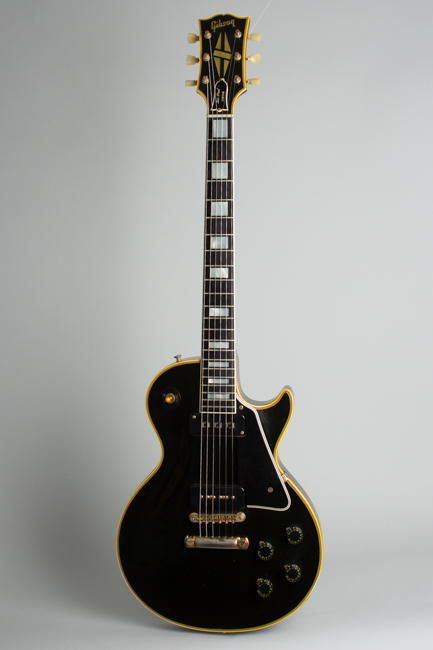 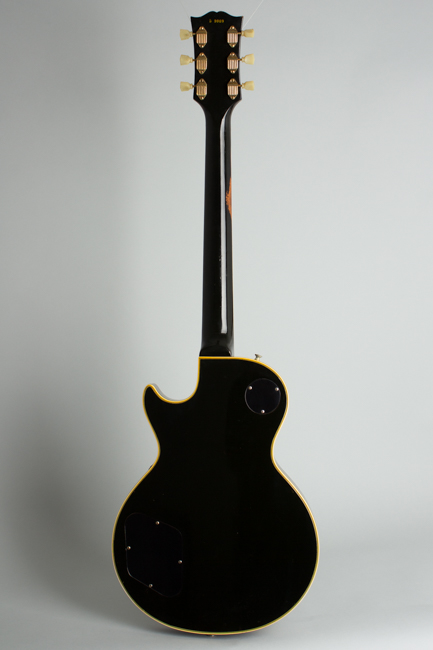 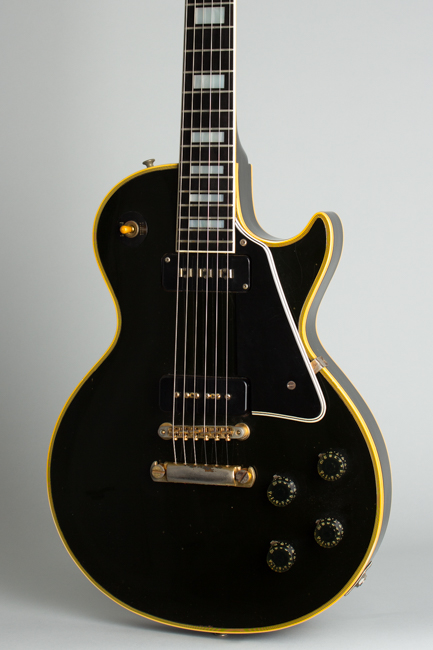 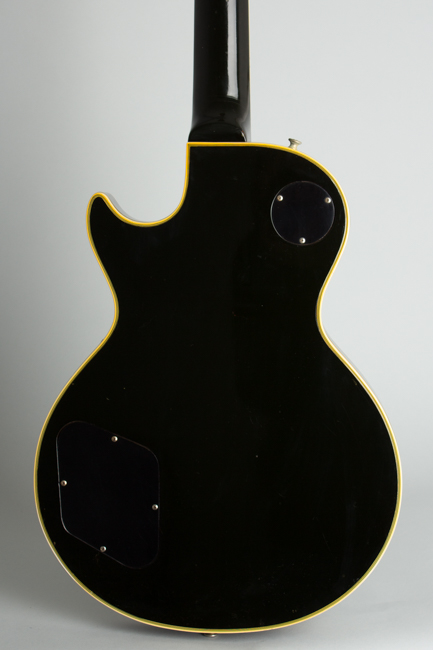 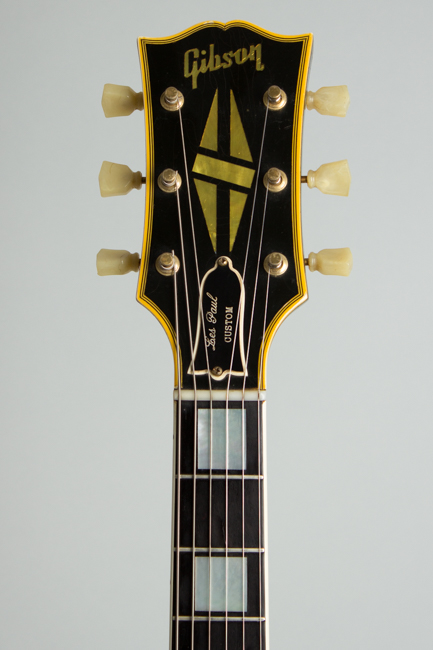 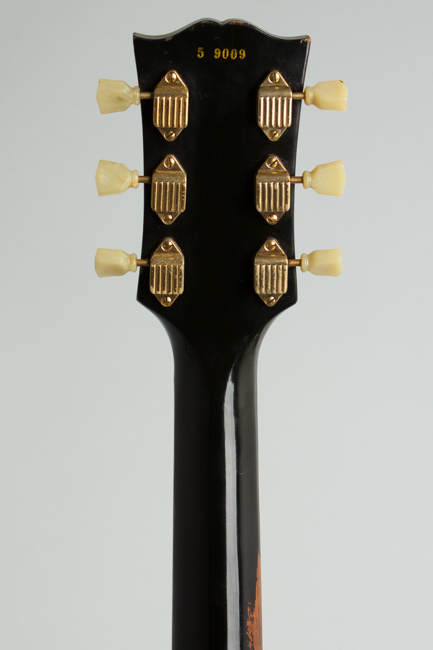 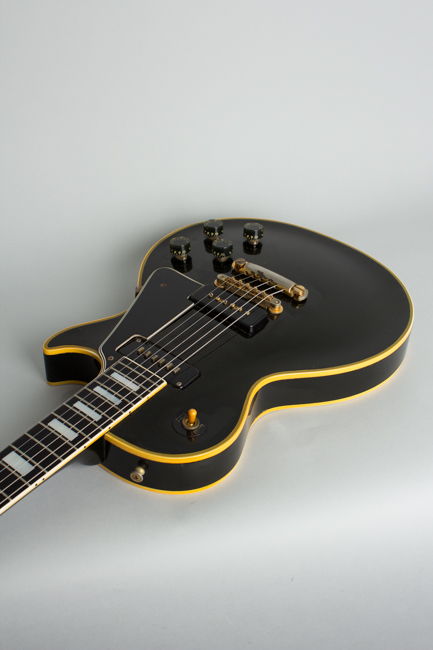 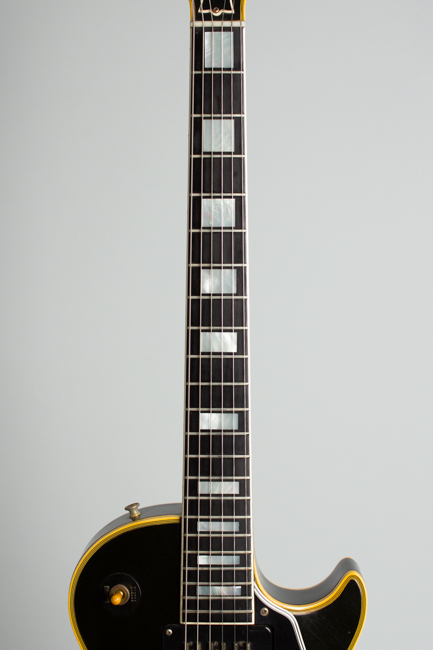 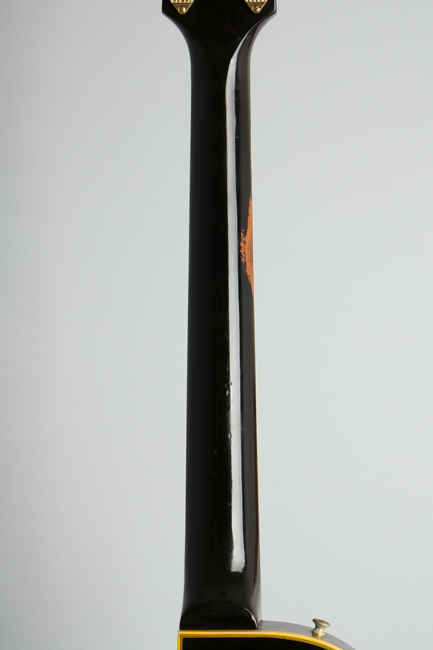 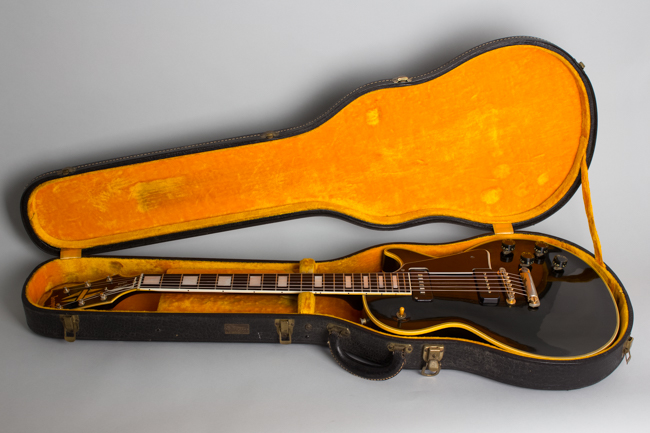 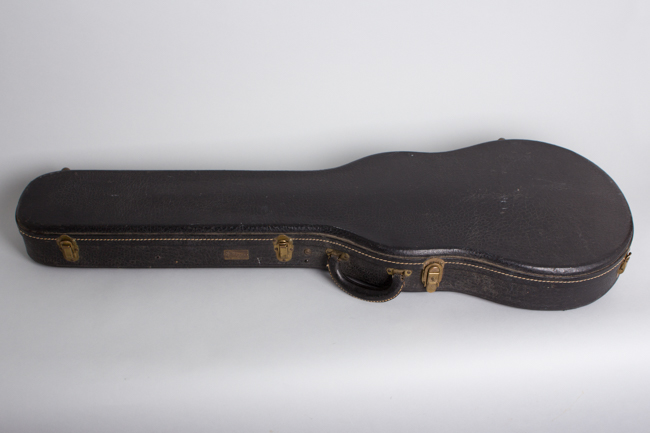 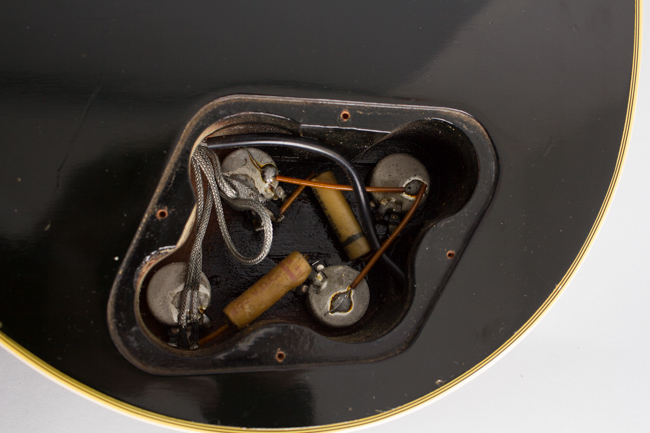 The Les Paul Custom was Gibson's top-of-the-line solid-body throughout the 1950s, a shining "Black Beauty" with gold-plated hardware and deluxe appointments drawn from the company's flagship archtops. This model was introduced in 1954, with direct input from Les Paul himself as to what he wanted his personal instruments to be. Gibson delivered, and Les and Mary Ford performed for the rest of the 1950s on modified Customs. This second-year model was made in mid/late 1955 and remains completely original as it left Kalamazoo.

The gleaming black finish was Les' idea -- he called it a "tuxedo effect" and believed it made the player's hands stand out to the audience especially on TV. The guitar has several other features unique to the Custom. One that is hidden is the carved-top solid body is made entirely of mahogany; unlike the Standard model, it has no maple cap. This was not one of Les' specifications, and while he later claimed Gibson had "screwed it up," this does give the Custom a slightly warmer natural sound, which Gibson thought might appeal more to jazz artists. The appointments are high-end; the fretboard is ebony with pearl block inlay, and the elaborate split diamond motif on the headstock came from the Super 400, Gibson's most expensive guitar. There is multiple binding in the body and headstock and all hardware is gold-plated, including the high-end Kluson "waffleback" tuners.

The Custom was the first Gibson to feature the then-new fully adjustable Tune-O-Matic bridge, mated to the stud-mounted stop tailpiece unit that had previously served as the bridge on the Standard and Junior models. It was also the only solid-body to carry the new "Alnico V" staple-magnet pickup newly designed for the company's high-end instruments, again likely with input from Les himself. This unit is essentially Gibson's take on a DeArmond DynaSonic, which is what Les had mounted in the neck position of in his personal Standard in 1953-4. Combined with the more typical P-90 in the bridge position, this crisp and powerful pickup gives the Custom a wide tonal range unique among Gibson solid-bodies.

Another feature specific to the Les Paul Custom were very thin, low and flat frets, again Les' personal preference. Gibson called it the "Fretless Wonder" and while it did appeal to some players in the 1950s, since then most rock players have found this setup not conducive to their style. This Custom has never been refretted; the original wire is intact and very low. If the instrument is to be played extensively a refret to whatever spec. is desired can be arranged, but we prefer to leave these instruments original until that is determined.

In 1957 the Les Paul Custom was altered to feature three of the new Humbucking pickups, and the unique Alnico V/P-90 pickup mix was discontinued. Somewhere around 1,000 of these first generation Customs were sold between late 1954 and mid-1957. Several well-known players made extensive use of them at the time including R&B/Jazz specialist Mickey Baker and Bill Haley's Comets' guitarist Frannie Beecher. This model remains one of the classiest and sharpest looking solid-body guitars ever designed, and a unique sounding one as well.

This is a superbly all-original guitar and cleaner than most for its 65+ years on the planet, with only some light wear overall and no repairs or alterations. It appears in lightly played condition; The finish shows typical small dents and dings, but only a few tiny chips go down to the wood below. There is a bit more scuffing to the back of the body than the face, but no serious belt-buckle wear as is often encountered. The only notable areas of finish worn to the wood are on the bass side of the neck between the third and fifth frets with a few smaller spots on the treble side. The top shows very little checking, the headstock face has some check lines but none of the clear lacquer over the inlay has flaked off.

There is typical wear to the gold plating, notably on the ends of the bridge and most heavily on the stop tailpiece where much of it is worn away from the top from players' hands resting there. All electronics, wiring, and hardware remain original and untouched including the waxy "Grey Tiger" branded caps. The only notable oddity on the instrument is what looks like a small factory plug in the wood on the back just above the switch plate; this may have filled an errant screw hole or just a dink in the body during construction. It is under all finish coats; in fact the guitar shows no evidence of any later finish work ever performed and blacklights perfectly.

The original "fretless wonder" frets are still intact; many of these Customs have been refretted over the years so this is a fairly rare unaltered survivor. There has possibly been a grind and polish in the past, although these frets were set so low to begin with it can be hard to tell. The wire shows some minor wear and guitar plays fine as it is, within the constraints of the minimalist fret situation. As noted many modern players would prefer new frets and this can be arranged as needed.

On the whole is absolutely one of the nicest 1950s Les Paul Customs we have seen, only lightly used for its age. Both pickups have plenty of sing and the instrument has a very powerful sound both clean and cranked. This is a truly lovely example of Gibson's fanciest 1950s solid-body complete in the clean original yellow-lined black pebbled case. Excellent Condition.
×