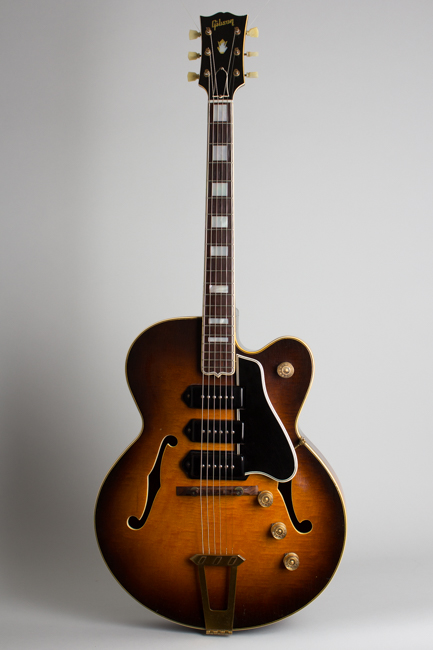 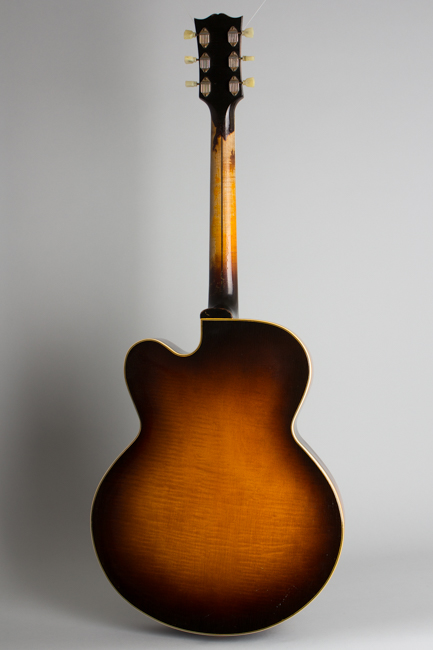 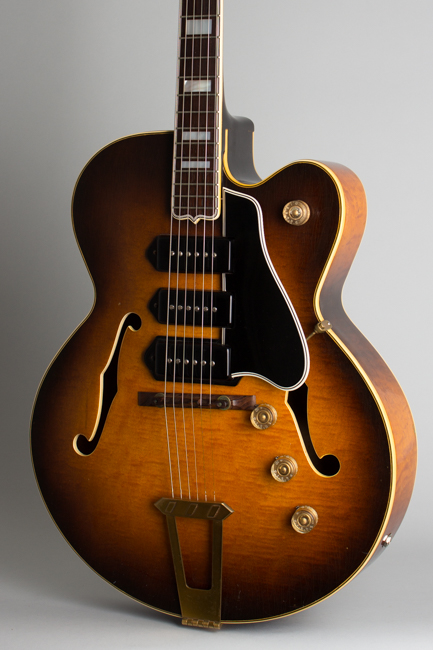 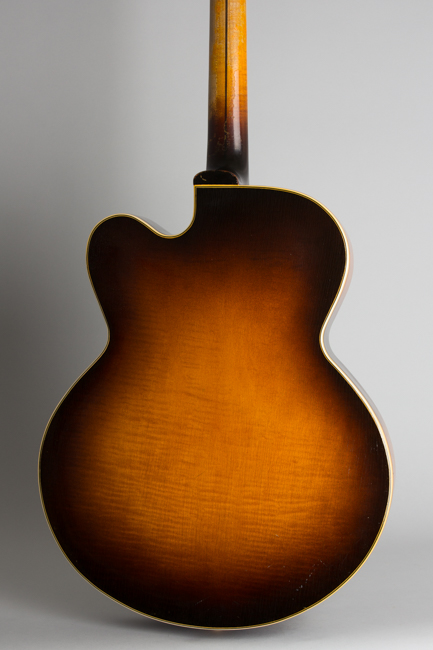 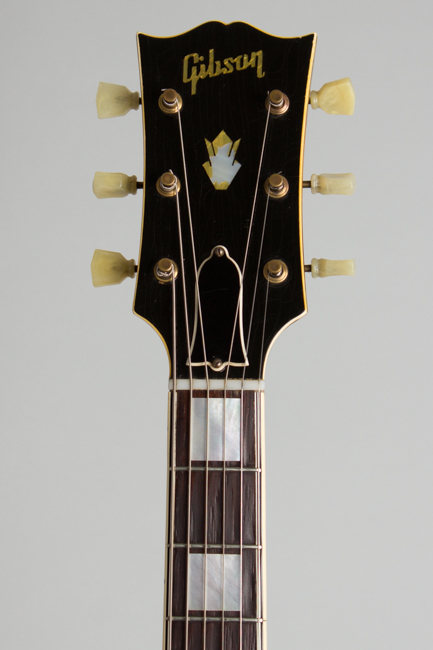 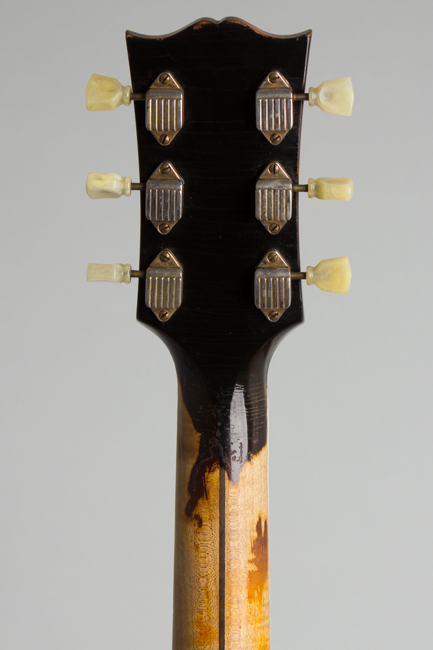 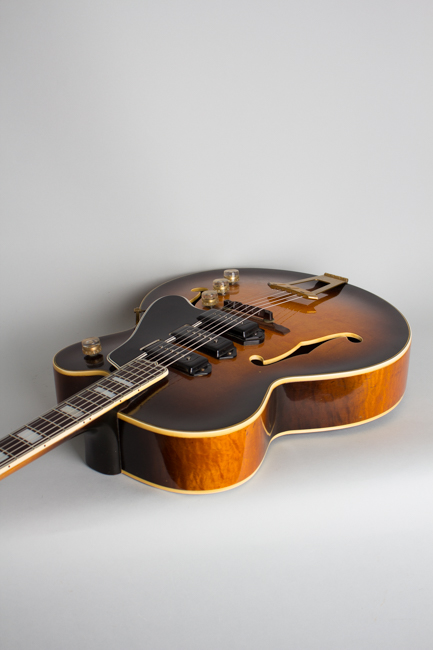 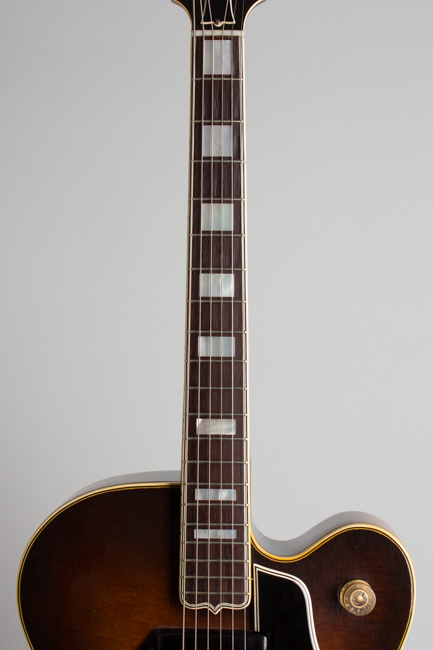 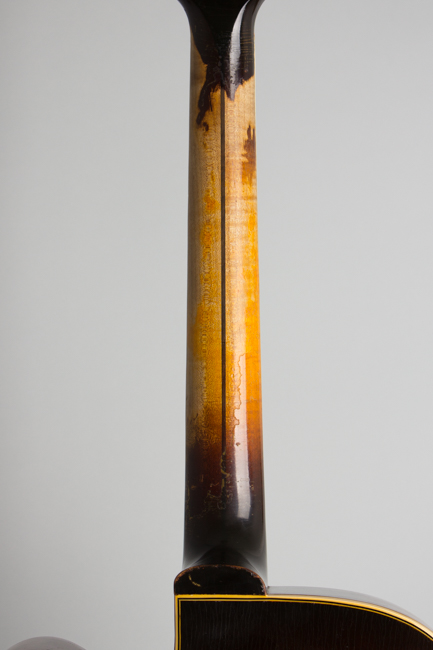 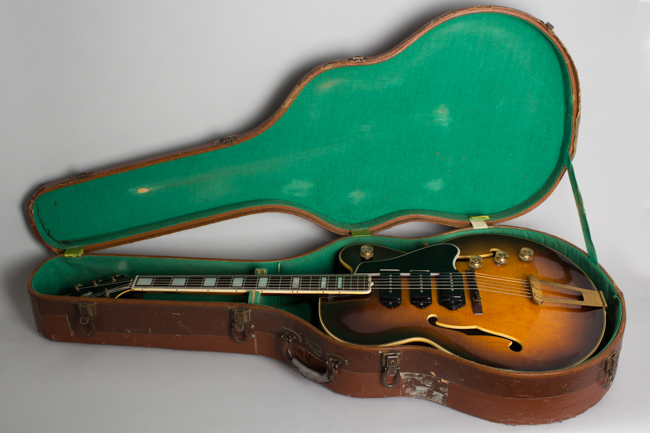 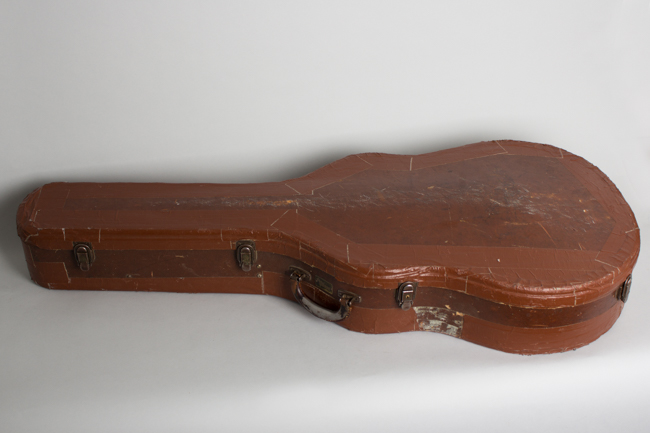 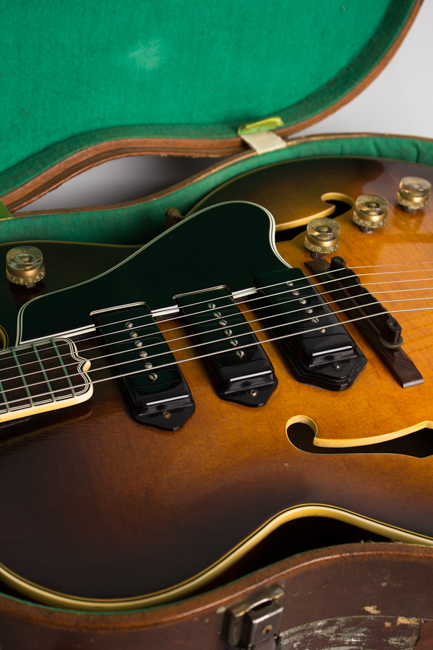 This is a well-played but super cool original example of an early 1950s ES-5, one of the all-time classic Gibson arch top electric guitars. This 17" fully hollow guitar was the most deluxe dedicated electric model Gibson offered when it was introduced in 1949. The *three* black covered P-90 pickups were a novel appointment at the time, something no other maker had yet tried. It was the direct inspiration for the even fancier Epiphone Zephyr Emperor Regent, and by extension the Fender Stratocaster.

The early ES-5 has no selector switch fitted; the pickups are controlled by three individual volume knobs on the lower treble bout and one master tone knob on the cutaway. These are topped with 5/8" high barrel knobs, clear with numbers as used by Gibson from 1949 through early 1953. All the hardware is gold-plated.

The laminated maple body has a single rounded cutaway and two bound f-holes, with a beautiful tiger grain on top and back. The pickguard is five-ply laminated plastic with a beveled edge; the trapeze tailpiece is the "L-7" style with pointed ends and three raised parallelograms. The maple neck is a three piece laminate, the center element being a narrow black stripe. The rosewood fretboard is five-ply bound and inlaid with pearl blocks.

The headstock is single-bound with a mother-of-pearl crown and Gibson logo inlaid in the peghead overlay. The back of the peghead is painted black, coming to a point just below the nut on the back of the neck. The Kluson Sealfast tuners (nicknamed "Wafflebacks") have plastic "tulip" single ring buttons.

This particular guitar has an early pre- letter-coded ink-stamped factory order number suggesting a late 1950 build date, with a serial number indicating shipment in April 1951. The ES-5 was redesigned in 1955 with a large selector switch on the cutaway and dubbed the "Switchmaster", that version lasted into the early 1960's. Despite a 5+ year production history ES-5's were expensive instruments and produced in fairly small numbers; only 88 sunburst examples were shipped in 1951.

Aside from its knockout looks, this ES-5 is a great-playing and sounding guitar, the most versatile of full-depth Gibson electrics due to the myriad extra tonal shadings offered by the center pickup. All three pickups can be blended in any combination and despite the lack of a switch it is easy to select a range of sounds by dialing in the individual volume controls. This model is most famous as the guitar of choice for T-Bone Walker in his heyday and remains well-suited to a variety of jazz, pop, blues, or early rock and roll styles, in addition to being a very imposing and collectible instrument.

This ES-5 has seen some serious play time but was well cared for and remains nicely original. While overall the guitar is relatively clean the back of the neck is heavily worn down, with a decent amount of bare wood exposed. It actually feels great, almost like an old Fender neck in spots; it is made of maple after all.

By comparison the finish on the body is relatively clean, with some checking and small dings, dents and marks but no major loss. All hardware and fittings remain original except for a few screws. The original frets and the fingerboard have some noticeable wear in the lower positions, but the guitar still plays nicely and sounds great.

This is a super vibey ES-5, we don't know who played it "back in the day' but it definitely has the feel of an old Blues or "Hillbilly' guitar. It does the T-Bone thing in spades! The original green-flannel lined brown hard shell case is externally rather battered but still intact, with a generous and carefully applied layer of brown duct tape on all the edges. This one has some stories to tell, for sure! Very Good + Condition.
×