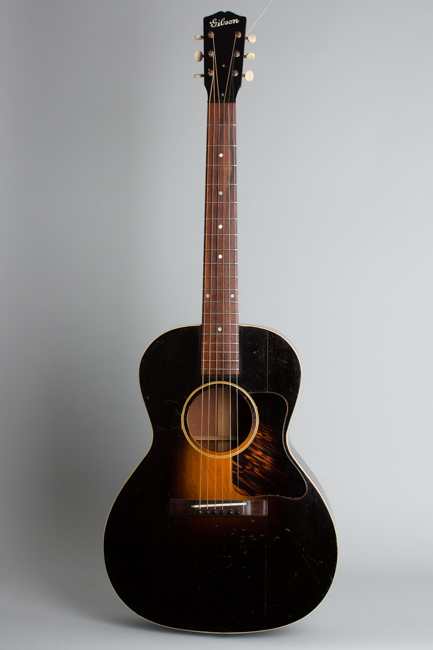 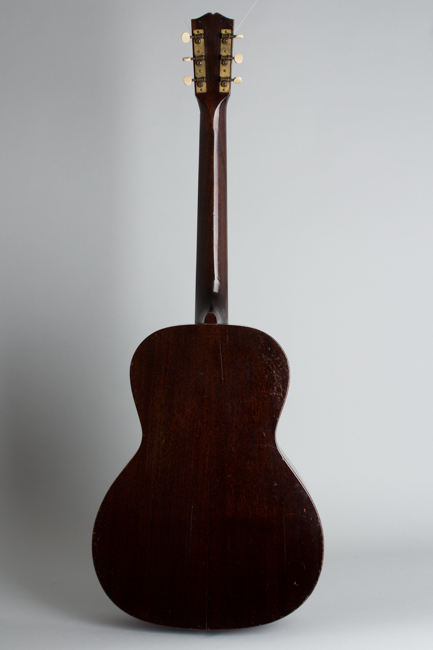 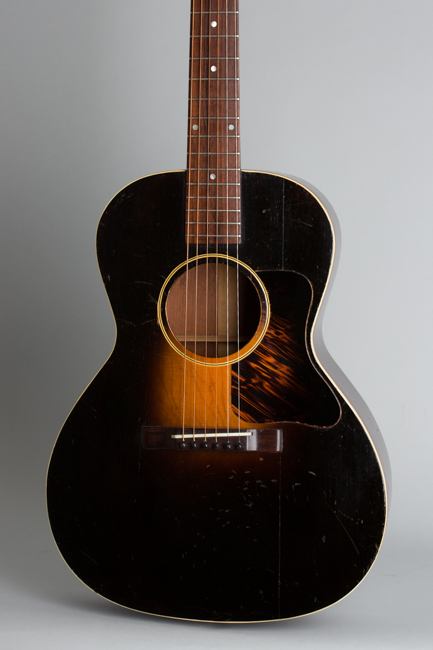 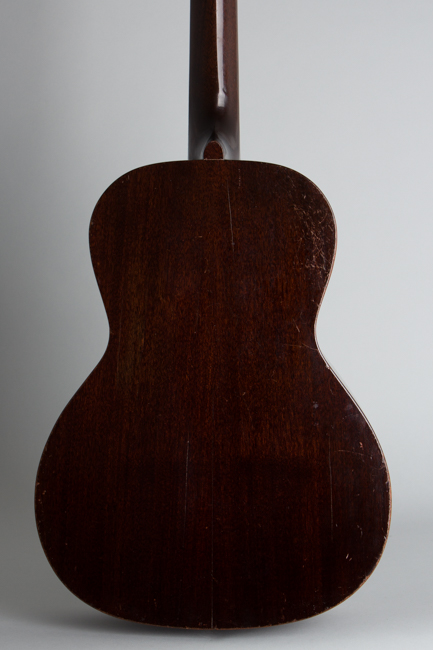 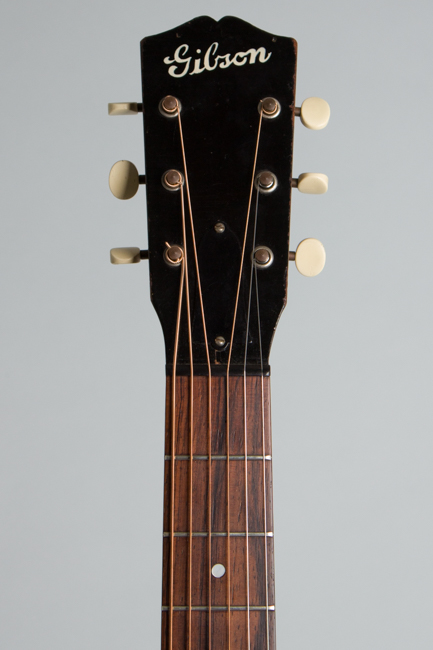 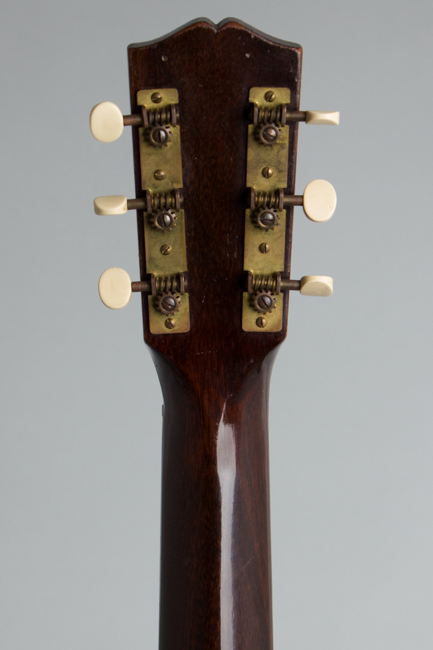 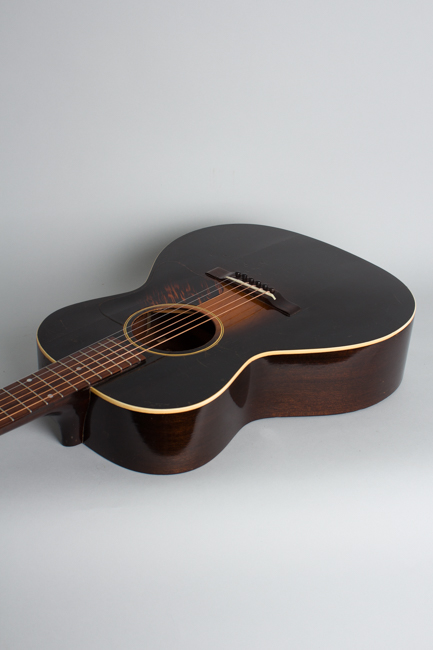 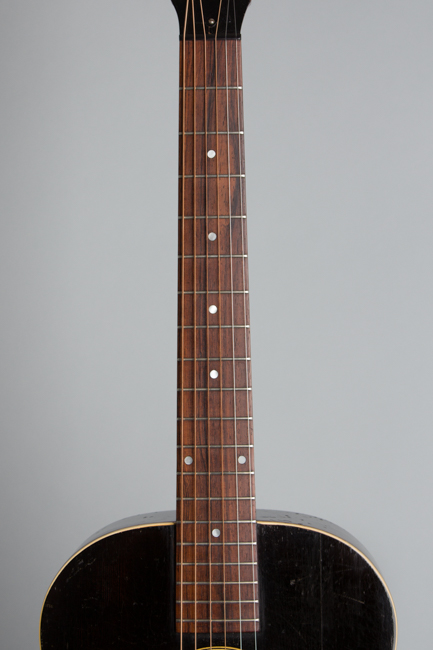 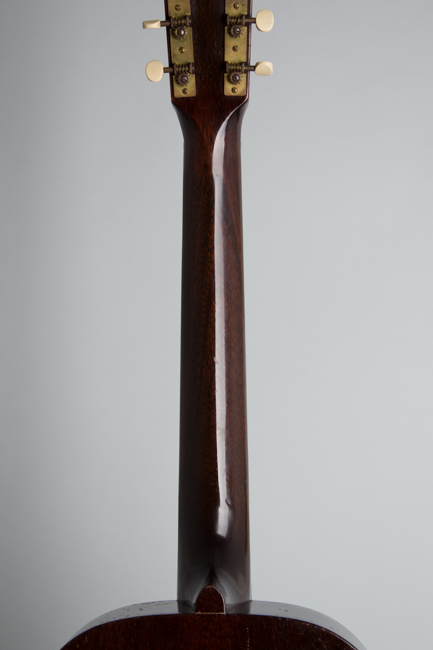 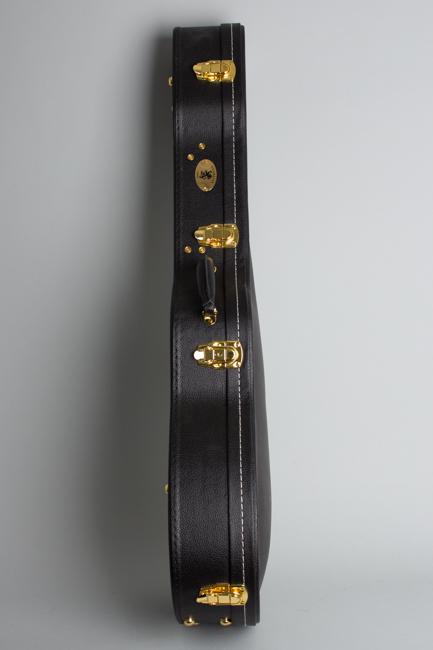 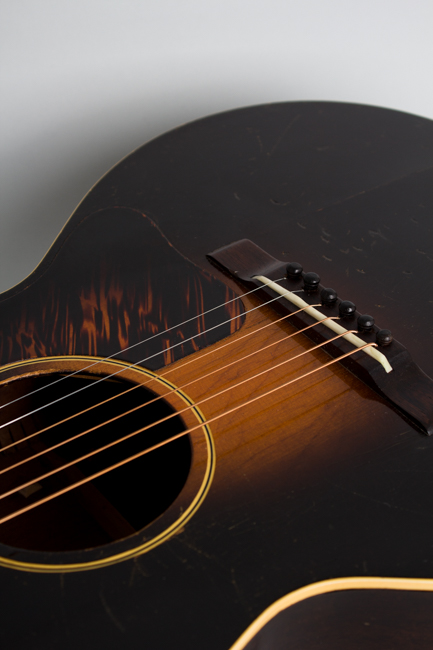 The L-00 has remained one of Gibson's most popular Depression-era guitars, then and now. While this model was at the bottom of the flat-top line in the early/mid-1930s, it offered great value in sound for a comparatively affordable package. This is a fairly early 14-fret example built in 1934 (when the list price was at an all-time low of $27.50, without the case) and has far less play wear than many, surviving in played but nicely original condition.

The finish on the spruce top is a dark sunburst with a small deep-hued center, typical of earlier-1930s guitars. There is single-ply white celluloid binding around the top edge while the back is unbound. The top is also ornamented with a "firestripe" tortoise celluloid pickguard and a three-ply sound hole ring. The top on this one exhibits an unusual depression-era expediency, as it is made of three pieces of neatly joined spruce instead of the usual two. The seams are visible on either side of the soundhole running the length of the top, the treble side join having been resealed cleanly. The wood itself is very fine tight-grain spruce; one can see how Gibson didn't want these nice but narrow pieces to go to waste!

The back and sides are finished in very dark mahogany, as is the "V" profile neck with an unbound rosewood fingerboard. This neck has less pronounced "V" contouring than some examples, just a bit more rounded without the sharp spine that some players find uncomfortable. The headstock carries a white stenciled "Gibson" logo on the face and simple openback unplated strip tuners. The original rosewood bridge does not have the reinforcing bolts with their pearl dot caps added soon after this one was made.

This model was a working-class standard of the day, a professional grade guitar affordable to blues players, Hillbilly string bands, and many other itinerant musicians as well as Gibson's intended student customers. Each one has its own character and this example is great-sounding both finger- and flat-picked, with a powerful ringing tone that never gets harsh. This is a very nice example; many of these pre-war Gibson flat-tops have been heavily worn and often amateurishly repaired, while this L-00 has seen some use and repair it maintains its original character and offers a very big sound.

Overall this is a relatively well preserved early L-00, showing wear and some light repair but cleaner than many of these working class wonders, especially the older ones which are becoming much harder to find. The finish is nicely original overall and shows very light typical checking to the lacquer but does have numerous small dings, dents and scrapes over the instrument. The edges of the soundhole rim are slightly worn through but the top shows less pickwear than most, with just a few additional scrapes above and below the soundhole.

There is some wear down to the wood along the edges of the back as is typical when this area is not bound, but again nothing excessive. The most notable wear spots are a number of fairly deep dings into the top behind the bridge and nearly identical marks to the treble side below the heel; the only possible explanation we can offer would be a player who wore pinky rings on both hands! The back of the neck is cleaner than most with only a few light dinks, no heavy capo wear or deep gouges.

There are several well sealed and cleated back cracks, neatly done with only topical touch up. The top seam on the treble side of the 3-piece top has been neatly resealed with a few very small cleats added; Gibson built it with no reinforcement to the seams at all. The area off the top edge of the pickguard has a small sealed grain split. All in all this is pretty minimal crack damage for such a lightly built instrument 85+ years along.

The original rosewood bridge maintains good height but may have been cut down just slightly forward of the pins. The saddle has been re-worked, with a slight compensation. The small maple bridge plate is original and unaltered. There has been a VERY neatly done neck re-set, evidence of which is only really noticeable under blacklight inspection. The original frets have had a light grind and polish with hardly any wear since. This is a lovely playing and great sounding guitar, a delightful example of this pre-war Gibson classic in a high-grade modern HSC. Excellent - Condition.
×