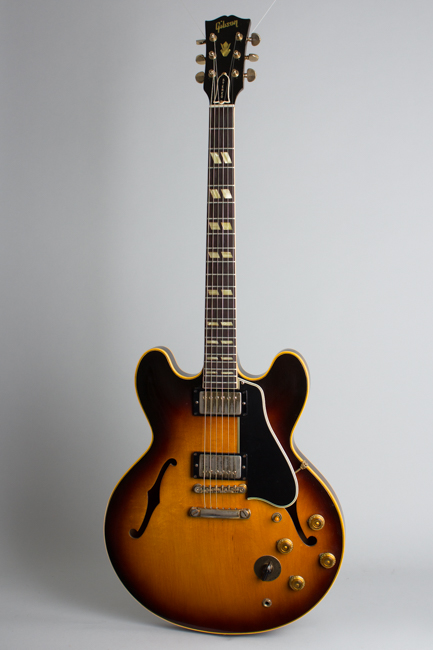 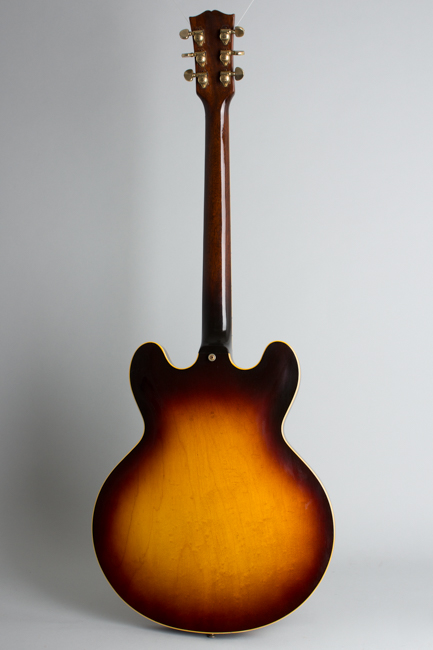 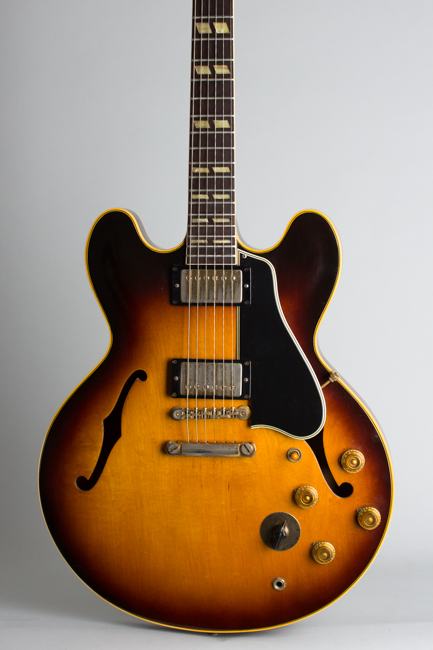 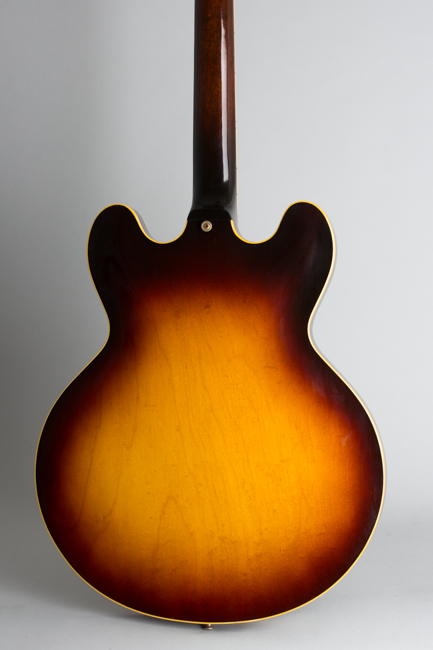 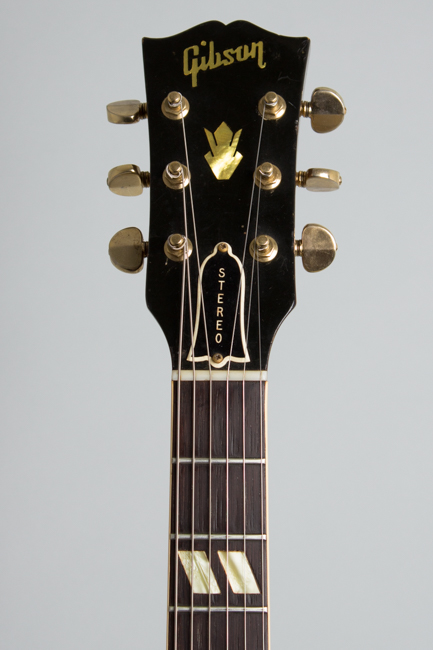 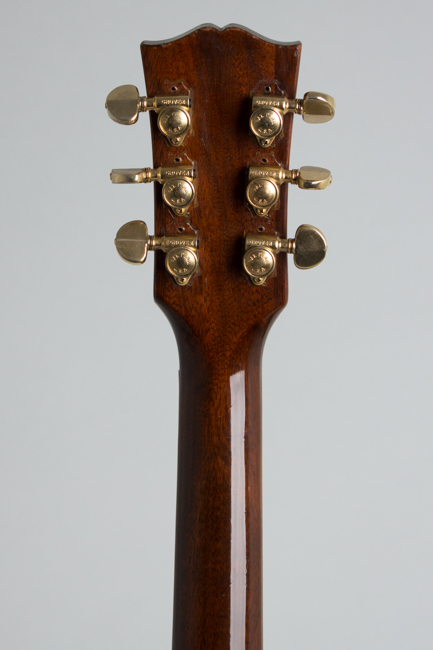 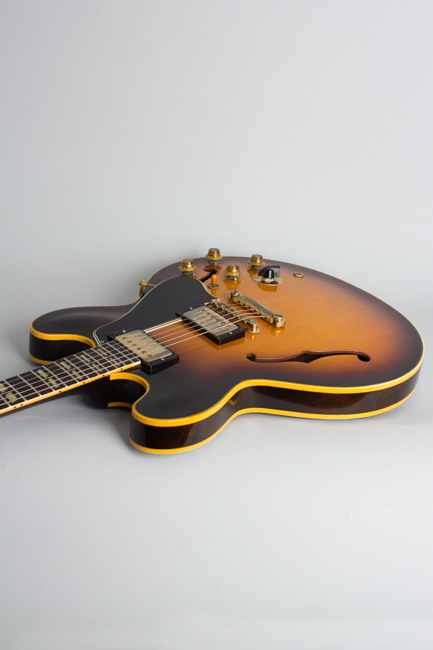 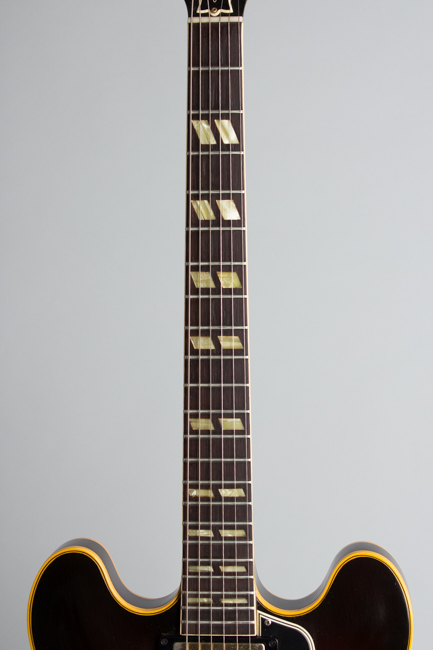 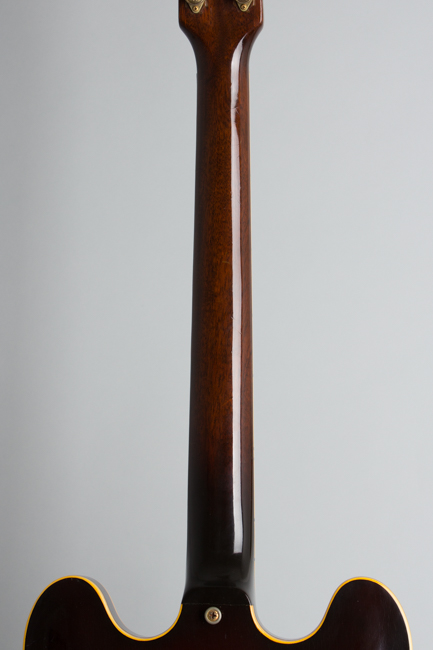 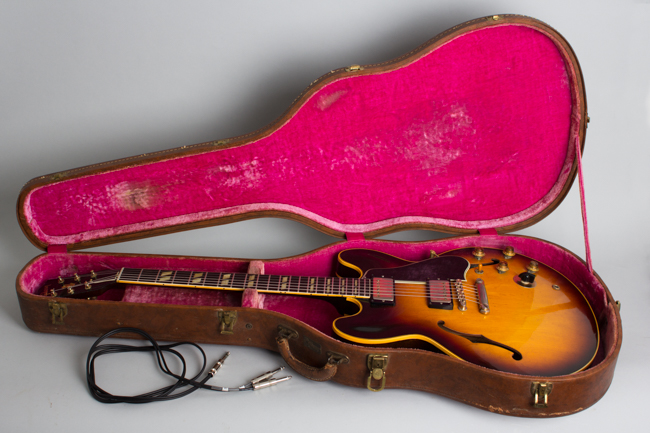 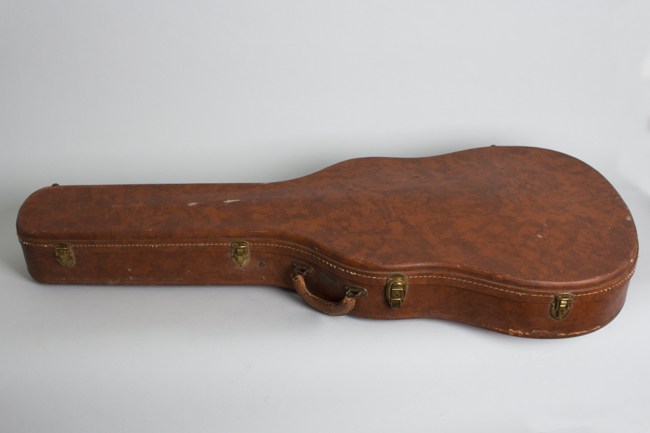 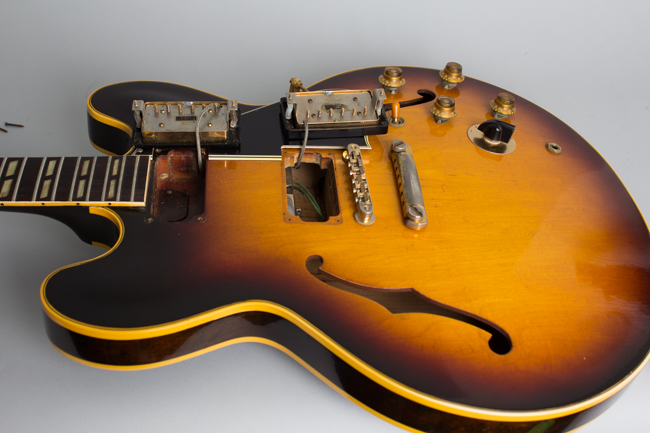 The ES-345, Gibson's original "Stereo" guitar, was a product of the late 1950s fascination with "better living through Electronics" that inspired several makers to "channel" their efforts into stereo instruments. Essentially a somewhat fancier version of the recently launched thinline semi-hollow ES-335, the 345 was added to the line in spring 1959. This mid-1960 example has two gold plated PAF pickups and the fairly thin, flatter neck profile characteristic of that year.

The model dressed up the 335 a bit, adding gold plating, a bit of extra binding and trapezoid pearloid fingerboard inlay to the design. Its real raison d'etre was the new stereo/Vari-Tone wiring rig, which was the hot trend at the time. Gibson's stereo wiring sent the signal from each pickup to a different amplifier (or different channel of the same amp) while the Vari-Tone was a 6-position notch filter which gradually brightened and thinned out the characteristically rich tone of the humbucking pickups. This model was originally designed to pair with Gibson's GA-79 stereo amplifier.

The ES-345 proved a fairly popular guitar in the 1960s, with signature users running the gamut from jazz to blues (most notably Freddie King) to several prominent British invasion players, including Pretty Thing Dick Taylor, Tony Hicks of the Hollies (who used one extensively), Eric Stewart of the Mindbenders and (briefly) Beatle George Harrison. Still, this was a fairly expensive guitar, and just 251 of these shipped in 1960 which is not a lot for Gibson in that period.

Additionally, this guitar is an original stop tailpiece model -- many ES-345s were ordered with vibratos in the 1960s. The "stoptail" design is generally held to enhance playability, giving an adjustable angle to the bridge off the tailpiece which can be steeper than the typical vibrato setup, increasing string break angle over the saddles. In 1965 a trapeze tailpiece was fitted as standard and the "stoptail" configuration was no longer an option. This is a simply splendid guitar; stunning to look at and a joy to play.

This ES-345 is a very nice example, showing only some light wear and a couple of parts changes but overall a very well preserved guitar. The sunburst lacquer finish still shines with only small marks on it, mostly dings to the headstock edges and a few tiny string-changing dinks to the top behind the tailpiece. There are a few small touch-ups on the headstock edges. The original frets and fingerboard show some play time, with minor wear to the board in the lower positions and evidence of light grind and polish work on the fretwire. The most notable wear overall is to the gold plating, which is heaviest on the pickup covers and tailpiece.

The hardware remains intact and original with two exceptions. The tuners were replaced (probably soon after the guitar was made) with an era-correct set of patent-pending gold Grover Rotomatics, as would have been found on an ES-355. Original style Kluson tuners could be re-fitted if desired with some minor work to the headstock. The early-style long pickguard is a recent repro from Gibson's custom shop, very well done of the correct material but the upper mounting hole in the guard was moved forward to avoid drilling a second hole in the top of the guitar. Apparently the template they are using is not accurate for 1960!

The original stereo-varitone wiring is intact and unaltered. The guitar plays and sounds exactly as it should, with the classic tones heard on literally hundreds of vintage recordings made with this model. The original brown case has some external wear but overall is quite solid and attractive. While it is not 100% original this is a great example, a superb survivor of the original stereo era of guitars and a true Gibson classic.
Overall Excellent Condition.
×