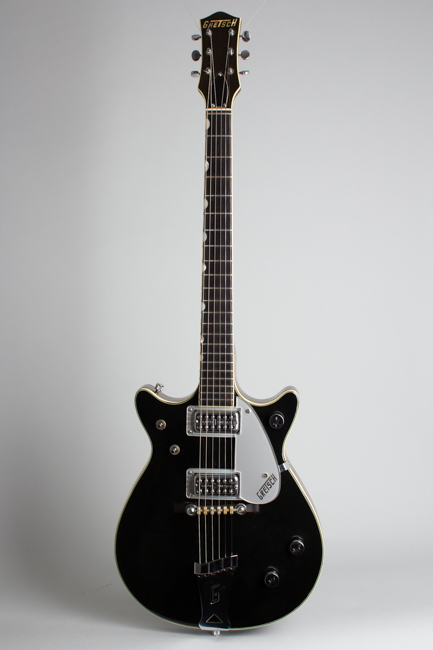 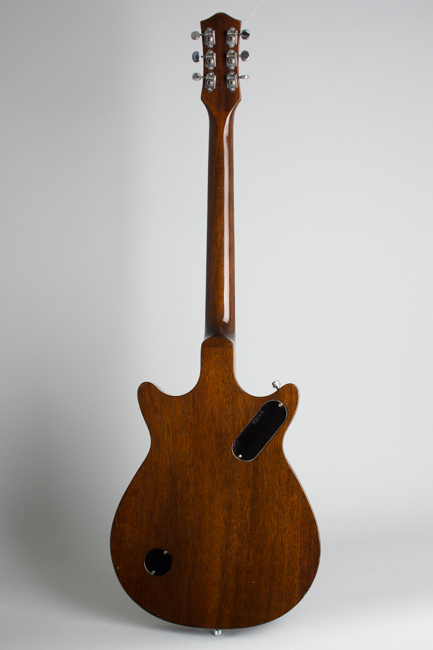 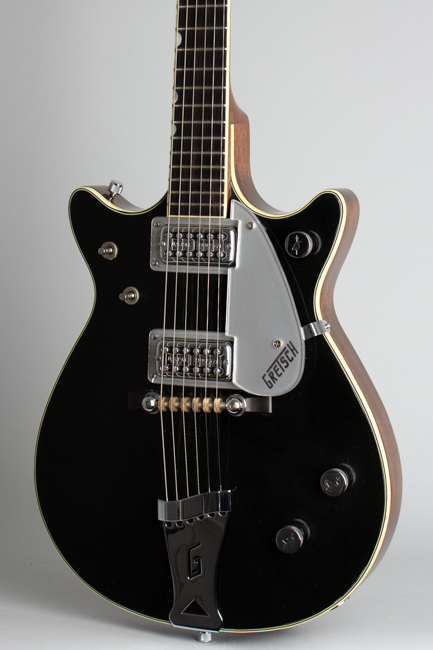 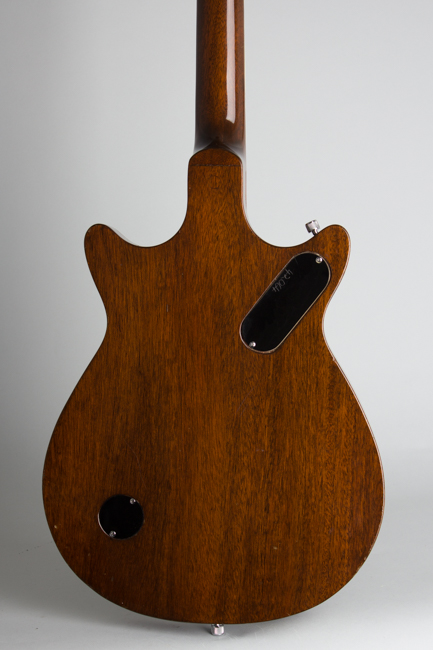 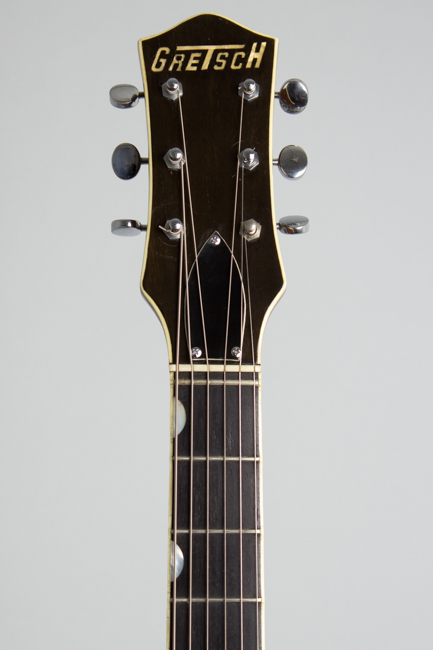 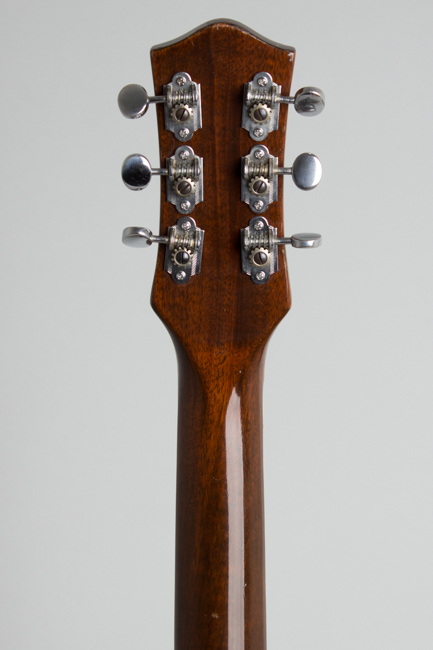 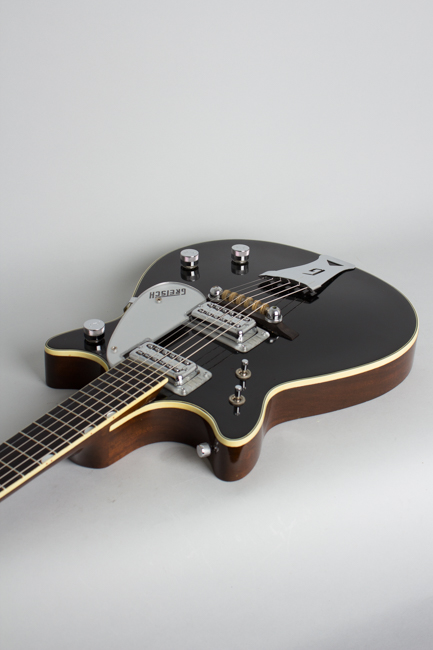 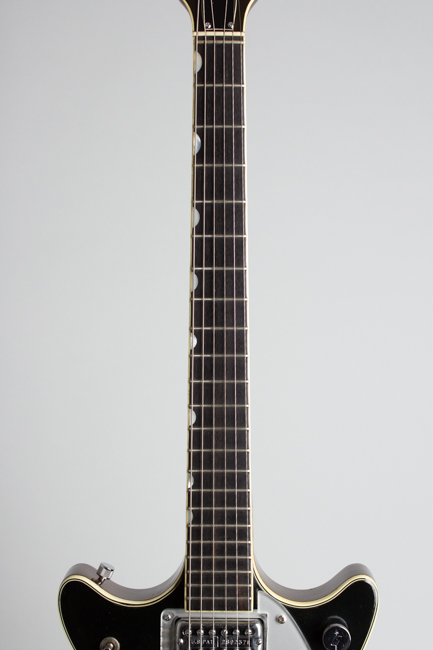 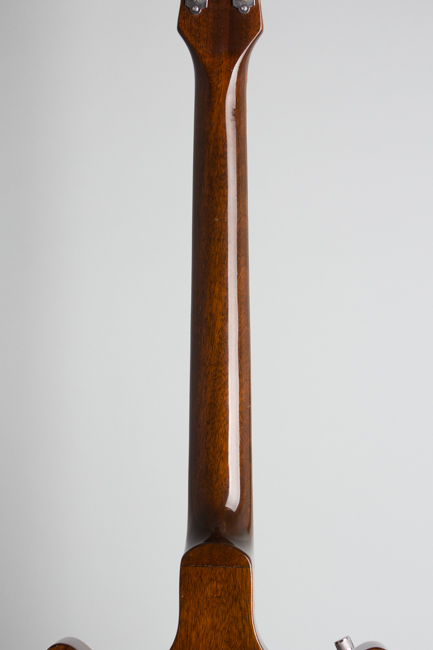 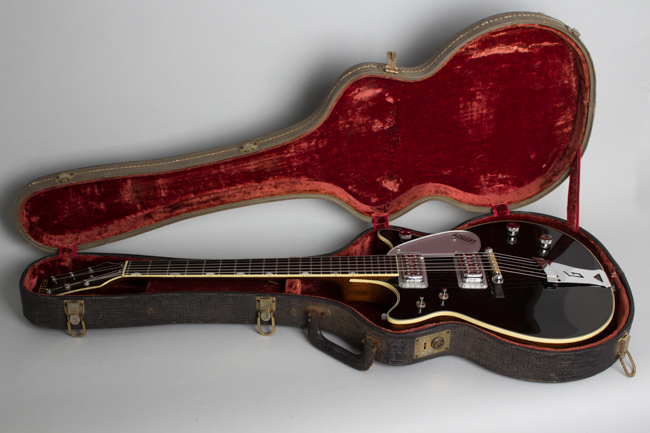 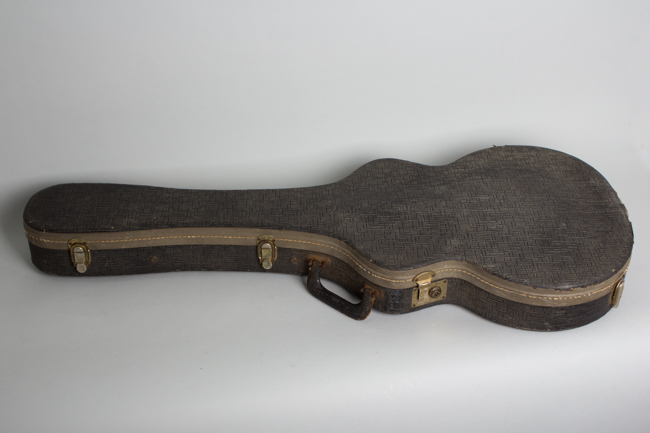 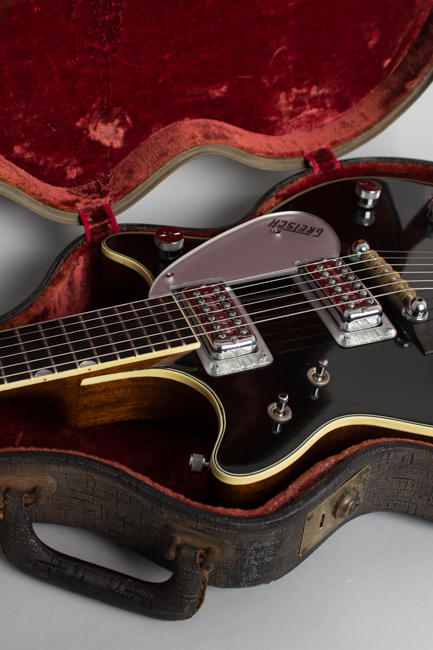 This is a truly superb original example of one of the earliest double-cutaway Gretsch Model 6128 Duo Jets, a true rarity and one of the "baddest" looking guitars ever. The shiny black lacquered top and chrome hardware combine for a striking, elegant visual impression, while chambered body and twin Filter 'Tron pickups provide plenty of musical muscle.

Through the 1950's the original single cutaway Jet models (Duo Jet, Jet Fire Bird and Silver Jet) had been quite successful for Gretsch, at one time even a serious competitor for Gibson's Les Paul. Although described as solidbodies, they are in fact semi-hollow, with extensive chambering in the bodies giving them a rather different sound and feel.

The year 1961 saw a flurry of design activity at the Brooklyn Gretsch factory. The original Jet models had then been in production for over 7 years and must have been seen as somewhat old fashioned. In mid/late 1961, Gretsch shifted the Jet body from a single to a double cutaway format, likely in emulation of Gibson's recent introduction of the sculpted SG's. Several hollowbody models underwent a similar evolution, including the Country Gentleman and White Falcon, and for the first time Gretsch produced actual solid guitars including the Corvette, Princess and truly oddball Bikini models.

This guitar is from the transitional batch of Jets, which bear serial numbers in the 420XX series. The earliest examples are single cutaway instruments, but by the middle of the batch double cutaway guitars like this appear. Examples just a few numbers earlier have a notable eccentricity: The twin selector switches were arrayed across the body in a straight line above the pickups. This must have proved impossibly awkward to players immediately, and by the time this guitar (#42064) was made, they had been moved forward closer to the cutaway horn.

This guitar sports some other odd or short lived features itself. The top on most Jets is thin laminate maple, sometimes finished in lacquer and sometimes covered in a layer of black nitron plastic. This guitar appears to feature a laminated spruce top, something we have never seen before on a Jet from any era. It also retains the 1950's style solid "G" tailpiece; soon after all Jets were equipped with a very eccentric vibrato unit licensed from Burns of London as a stock fitting. Although many Jets are found today with a Bigsby vibrato, this was not a stock fitting, it was either custom ordered or usually retrofitted.

This guitar retains the standard late 1950's Gretsch electronics rig with two Filter 'Tron pickups, a master volume on the lower cutaway, individual pickup volumes on the lower quarter with the pickup selector and tone switch (AKA "mud" switch) on the upper bass side. This wiring is simple and effective in operation bit has still baffled generations of guitar players. Soon after this guitar was built a "standby" switch was added; only the earliest double-cut Jets like this one lack that feature.

This Jet is a delight to play. Both pickups sound spectacular with the traditional Filter 'Tron mix of ring and crunch, accentuated by the light chambered body. The neck is slim and round backed with a bound ebony fretboard inlaid in the "Neo-classic" pattern particular to Gretsch. The bridge is the eccentric "Space Control" unit which allows for lateral adjustment but not individual string intonation. The neck angle and playability on this guitar is excellent (which is not always so for these Jets), and overall this is absolutely the nicest double-cutaway Jet model we have seen, as well as the earliest.

This very rare Duo Jet variant remains in superbly clean original condition. The finish is very nice overall with only some minor wear and dings, mostly along the unbound lower back edge. A couple of tiny dings on the face have been neatly touched up. The chrome is super shiny, the hardware is complete and original inside and out EXCEPT for a well done reproduction pickguard that looks to be from the 1980's. The most important thing to note here is there is NO binding rot anywhere on the instrument; this is the curse afflicting most older Gretsch guitars today which this Jet has entirely escaped.

The original frets show hardly any wear and the neck angle is good without ever having been reset, making for an excellent player as well. The double cutaway Gretsch Jets have been associated with Malcom Young of AC/DC since the 1970's; in more recent years Jack White revived the design as well for a line of personalized guitars. We feel this is still one of the great underappreciated of vintage Gretsch models, a relatively unsung gem.

This first-born double-cut Duo Jet is truly a stunner; it has been previously resting in the Randy Bachman/Fred Gretsch collection for decades and this is its first appearance to the outside world since then. This simply don't get much better than this, super early and as well preserved as one is likely to encounter in 2021, 60 years on. The original two-tone grey case is present as well, a bit more worn than the guitar but solid and fully functional. Here (for now) back home in Brooklyn, as badass elegant as they come. Excellent + Condition.
×