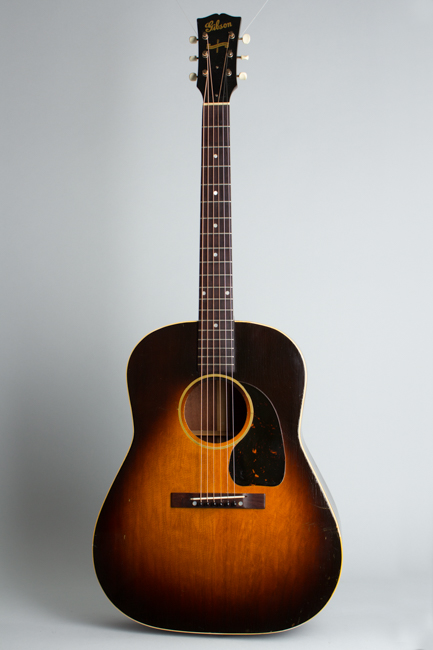 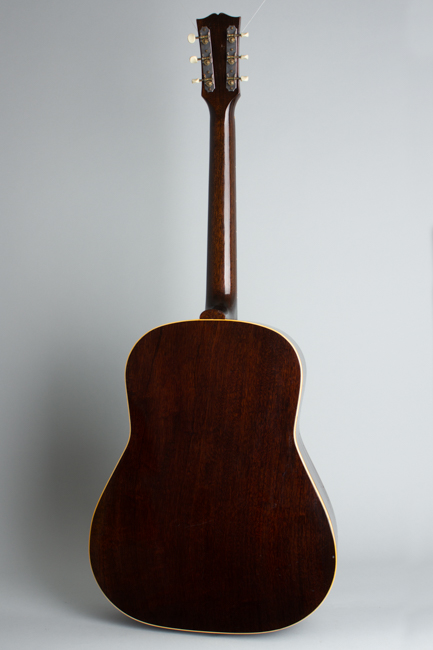 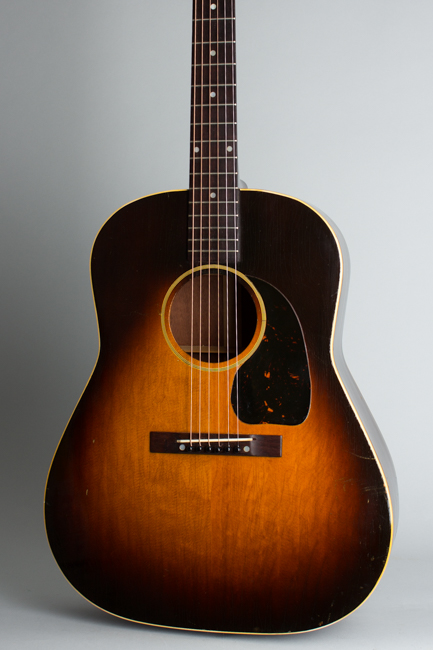 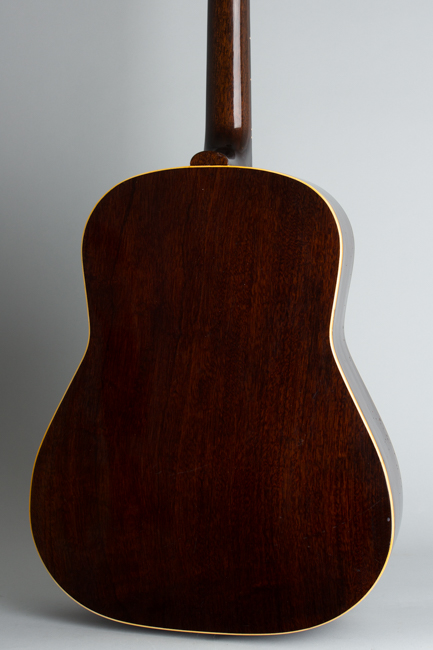 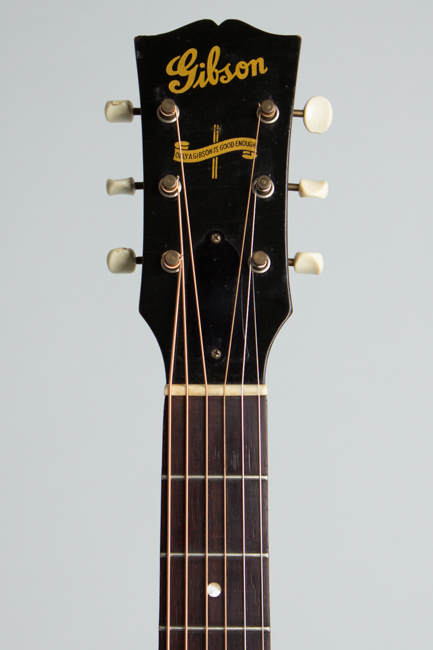 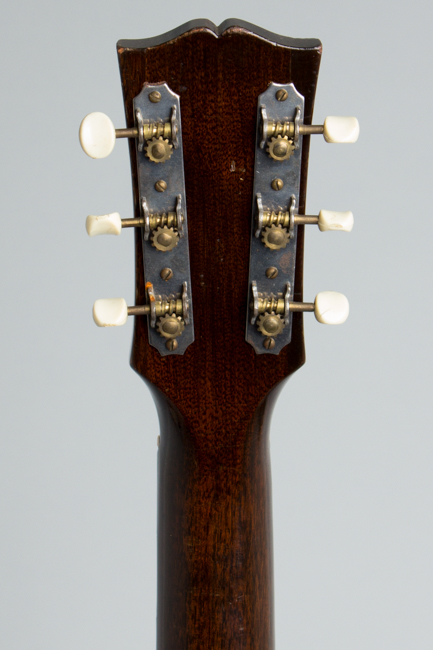 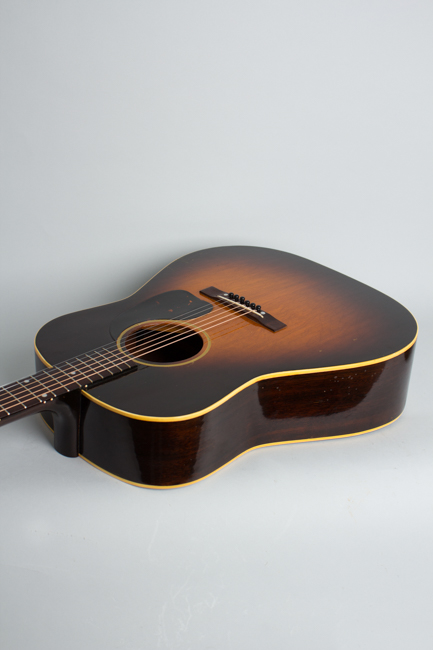 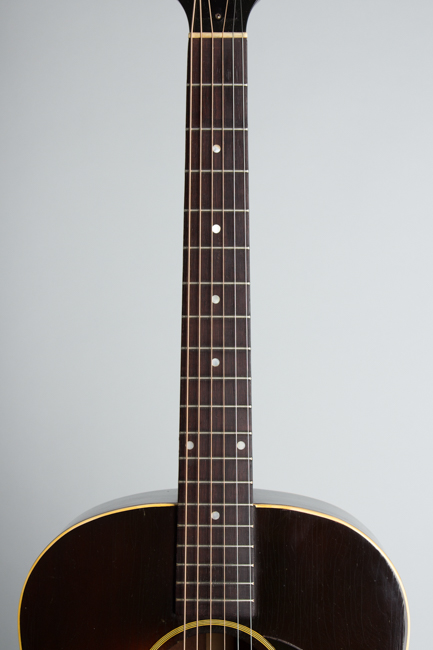 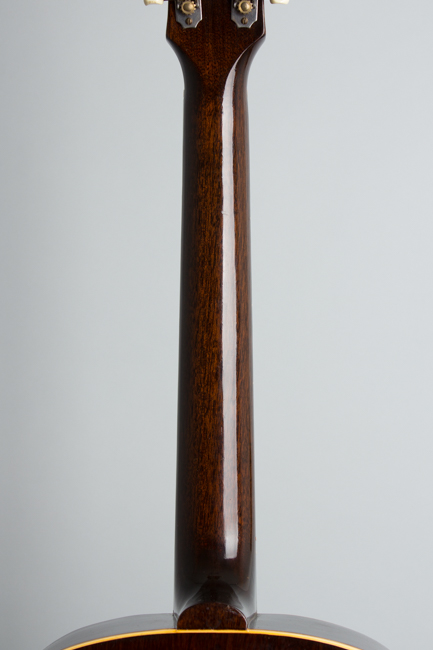 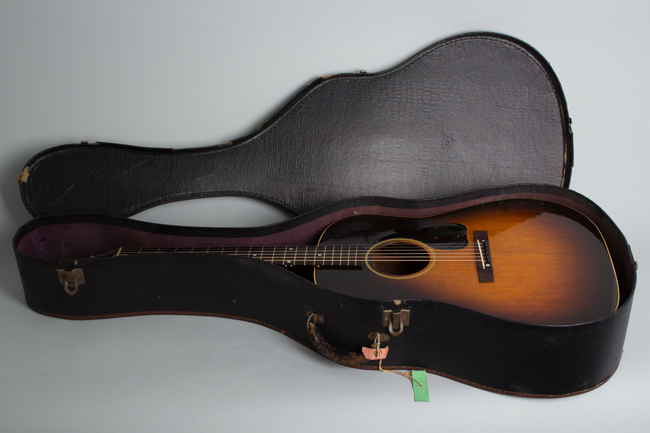 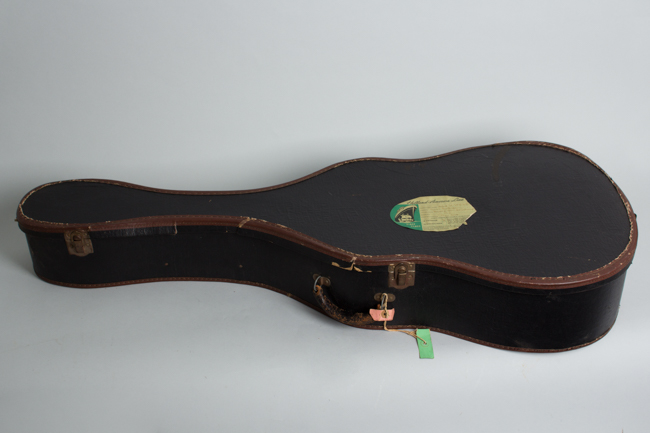 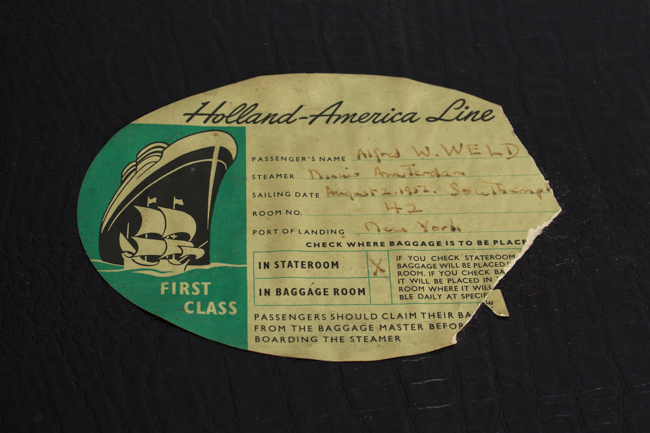 This beautifully preserved Gibson J-45 was built during the Second World War when the company's instrument production was severely limited. The specifications of individual instruments can vary greatly, dictated by the materials available. This particular guitar has the expected combination of a sunburst-finished spruce top over the mahogany back, sides and neck standard for the J-45. It also retains of the patented adjustable steel truss rod often missing from later wartime examples. The soundhole rosette is the earlier 7-ply style, while the top is single bound. The tuners are the wartime Kluson strips designed to use the minimum of metal. There is no Factory Order Number (FON) on the squared heelblock but the combination of features suggests this guitar is a late 1942 or early 1943 model based on recent research.

The neck has a deep round profile and is thicker than the preceding prewar J-35s, but not as bulky as many wartime guitars without a metal rod installed. The sunburst is deep and rich with a stately hue, darker in the center than some. The headstock bears the gold script Gibson logo introduced at this time over the "Only a Gibson is Good Enough" banner decal that gives this era's guitars their identifying name. This is a great playing, huge sounding instrument that has survived nearly 80 years in unusually fine condition, easily one of the nicest "Banners" we have ever had.

Overall this is a very clean early "Banner" J-45, an instrument is often difficult to find in this sort of condition. Structurally the instrument remains in excellent original condition with just some very minor repair. Cosmetically it shows general light wear, without much evidence of heavy playing. The finish, particularly on the top shows some fairly heavy checking but remains completely original. There are small dings, dents and scrapes but very little finish worn away from play. The bass side around the waist has some small circular marks that we usually associate with the instrument being exposed to an open fireplace at some point.

The guitar has not had a neck set or ever needed one. The original bridge looks to have been lowered slightly and possibly reglued, the bone saddle has been reworked a bit looks original as well. The pickguard has some marks around the edges from being glued back down after lifting slightly, and there is a tiny crack repaired off the top edge by the soundhole ring. The only other crack is a small impact check on the turn of the upper side waist that does not appear to have even gone all the way through the wood.

The back of the neck has only very light wear, the original frets likewise show only the lightest signs of use. The tuning pegs are original and still work as well as they ever did. The J-45 of this era is an extremely fine instrument, this superb example is in far better preserved condition than most wartime Gibson jumbo flattops. It plays extremely well and the sound is quite powerful with the midrange sweetness Gibsons are famous for but plenty of depth and top end to back it up.

The original chipboard case is included, with a steamship label on the lid indicating it returned from Southampton on the Holland-America line in 1952 with passenger Alfred W. Weld, who was the original owner. He passed away in 1957 and the guitar was willed to his son, Jonathan Weld who died in 2019. It is increasingly rare in the 21st century to find instruments of this vintage that have been retained in a single family since new; in this case the guitar was maintained in exceptional condition. The lovely original case is not fully functional, so a more recent hardshell can be provided as well when this heirloom instrument moves to a new home! Excellent Condition.
×