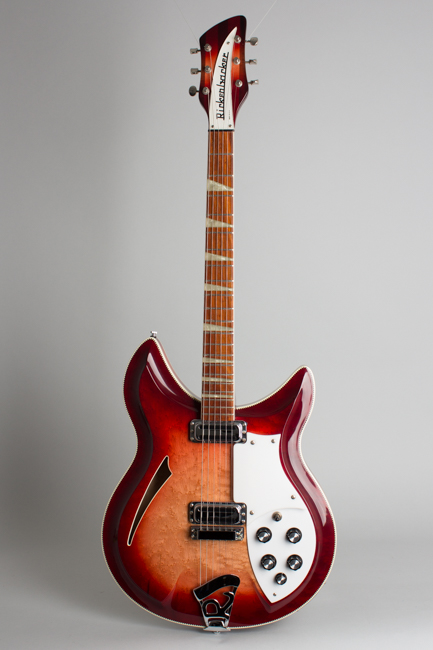 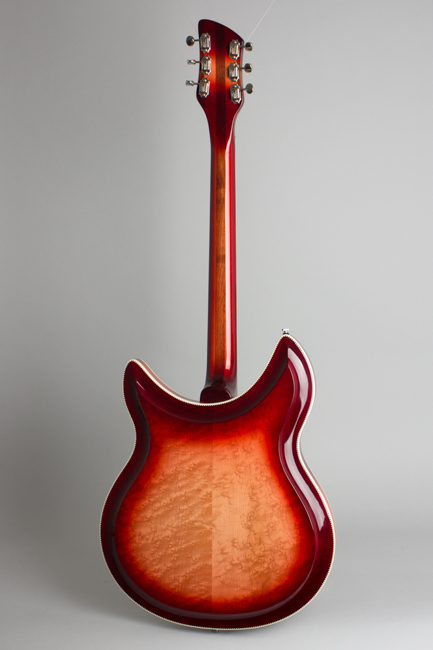 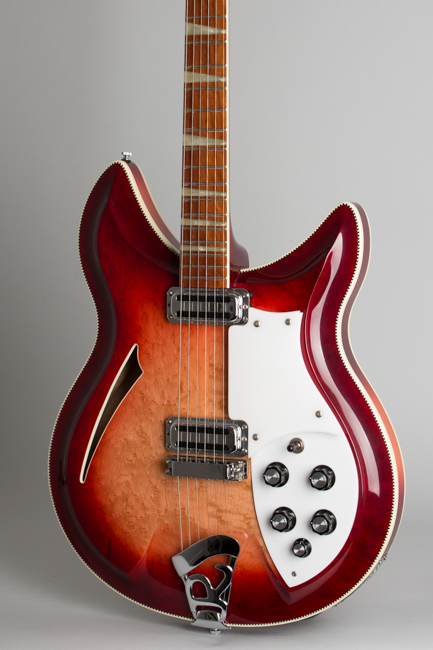 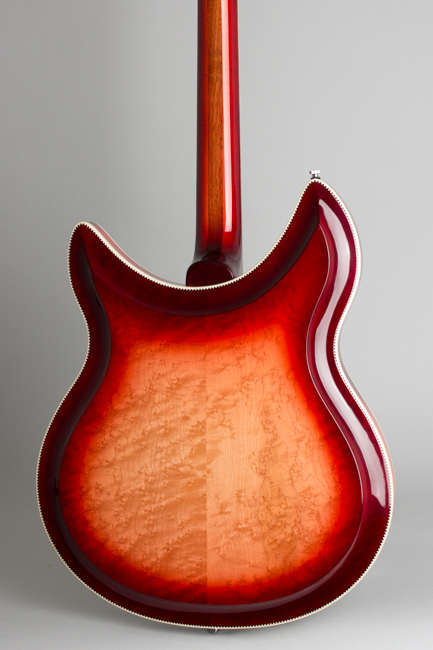 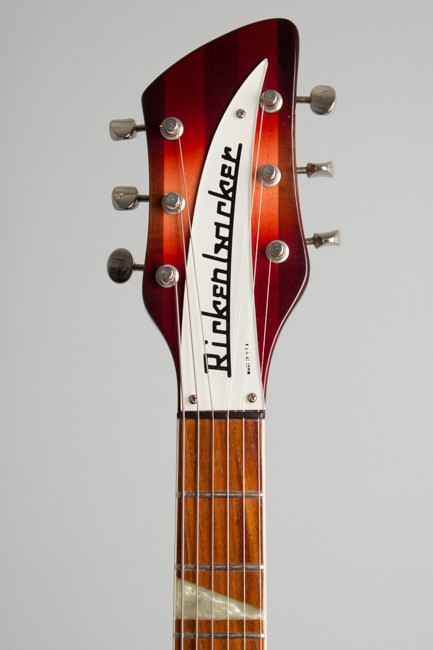 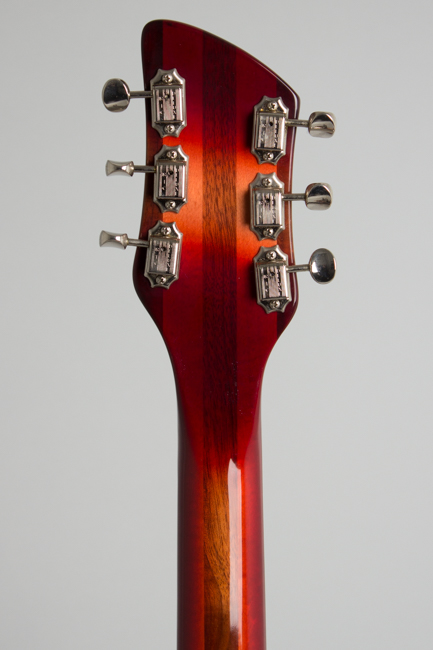 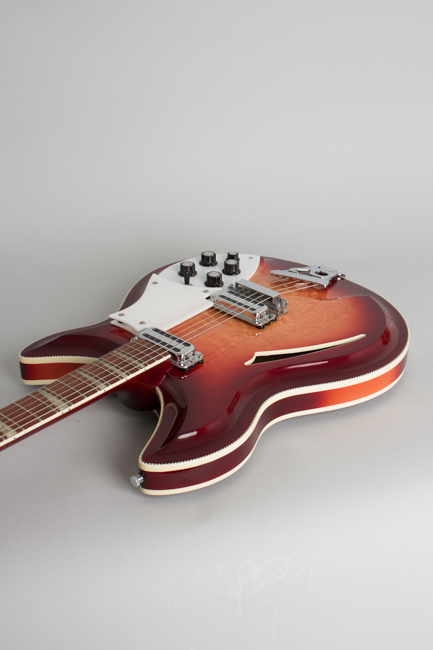 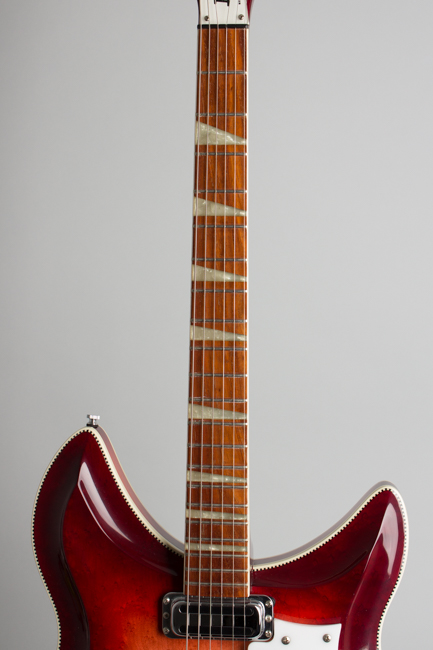 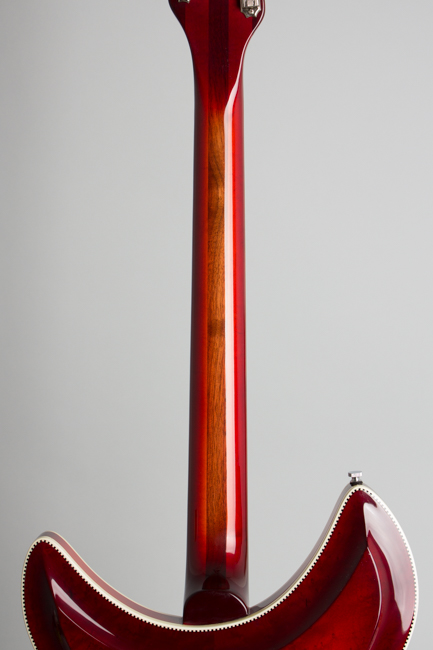 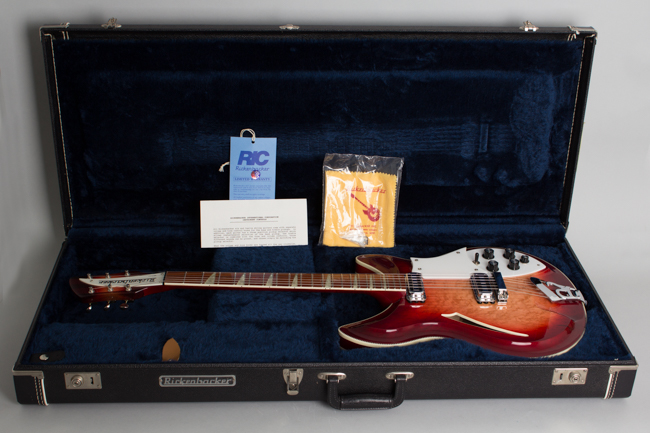 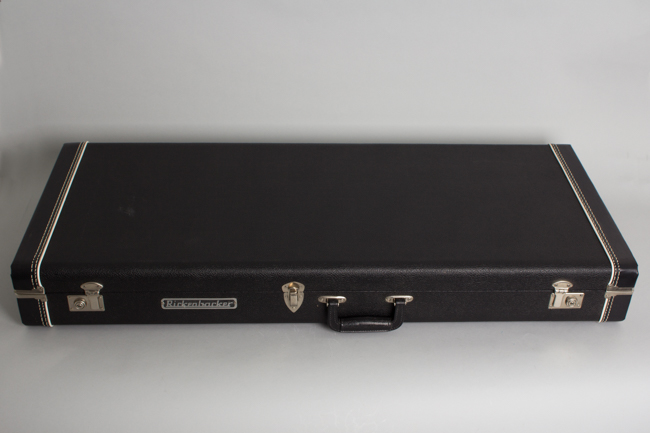 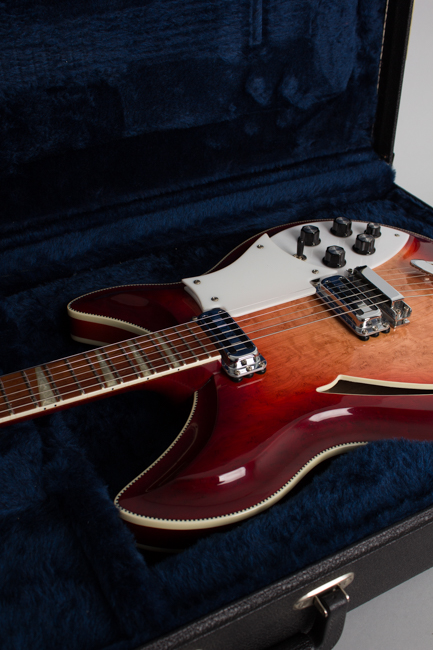 The Rickenbacker Model 381 is one of those great "lost" guitars, remembered more as a footnote in the company's history than for its own considerable merits. While the familiar electric models 315 - 375 have formed the core of Rickenbacker's guitar line for 60 years now, the 381 has never really caught on despite several reboots. This is no fault of the guitar itself, which is a uniquely fine instrument...just one of those quirks of fate.

The 381 is essentially a super deluxe version thick-body of the model 360, with most of the same fittings but an elaborately carved top and back of beautiful quilted maple. This makes the guitar somewhat heavier, but in general the instrument plays and sounds much the same as its lower-numbered siblings. The recessed-edge "German curve" around the rim of the top and back was a specialty of luthier Roger Rossmeisel, who designed the original 300 series for Rickenbacker in the 1950s. No doubt this model was his proudest creation at the time.

The 381 was first issued in the late 1950s, in miniscule numbers. In 1969 the company introduced an updated version, and did score one big if short-lived endorsement with Steppenwolf's John Kay. These guitars were again produced only in very small numbers, and the model faded away as the bass guitar became Rickenbacker's most successful product in the 1970s. In the late 1980s a direct re-issue appeared, called the Model 381V69, or "Vintage 1969". The 381 has been produced since but only in limited numbers, something of a specialty instrument compared to the ever-popular Models 330 and 360.

This 381V69 was made in January 1991 and is finished in a beautiful unfaded Fireglo finish, with all the Deluxe Rickenbacker trim features including checkerboard binding and pearloid "slash" inlay in the fingerboard. The top and back are carved from solid bookmatched burl maple with a spectacular burl figure. The electronics are the standard vintage Rickenbacker style with two "toaster top" pickups offering stereo or mono output and the 5-knob array with the small "blend" control that has confused generations of players. It offers the classic Rickenbacker sound with a bit more depth due to the thicker hollow body. We feel this is still a very under-appreciated model, and a unique Rickenbacker with plenty of unexplored potential.

This guitar appears very little used, with only tiny handling marks and no real wear or alterations. The guitar plays and sounds exactly as it should and is now nicely aged nearly 30 years, with a lovely slightly ambered patina. It comes in the original deluxe Rickenbacker case with the warranty, instruction sheet, and the classic Rickenbacker-logo polishing cloth and bridge wrench still in the unopened bag. Near Mint Condition.
×