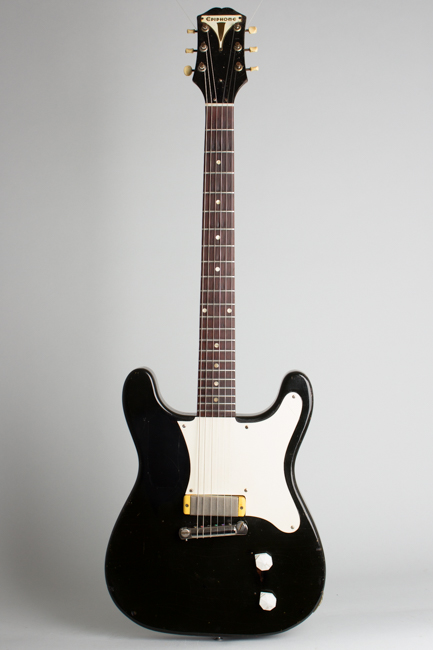 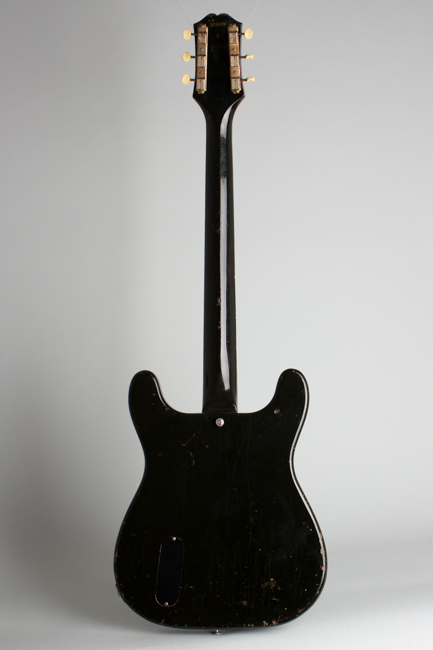 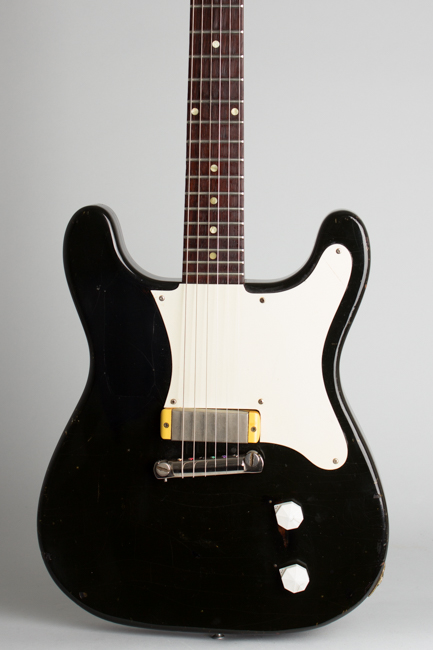 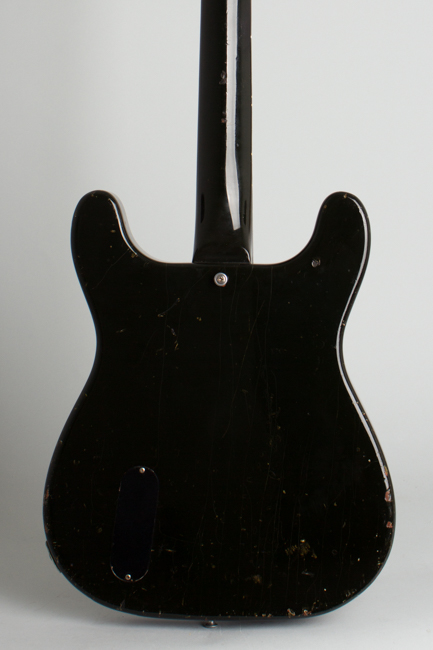 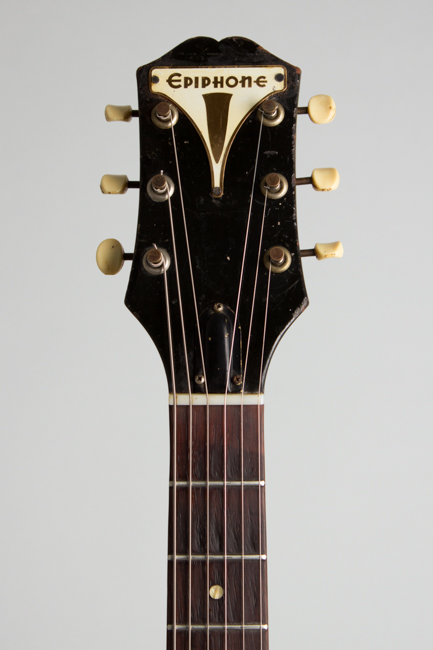 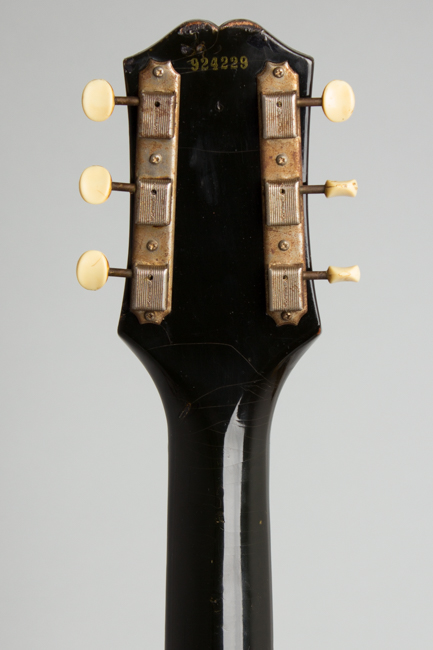 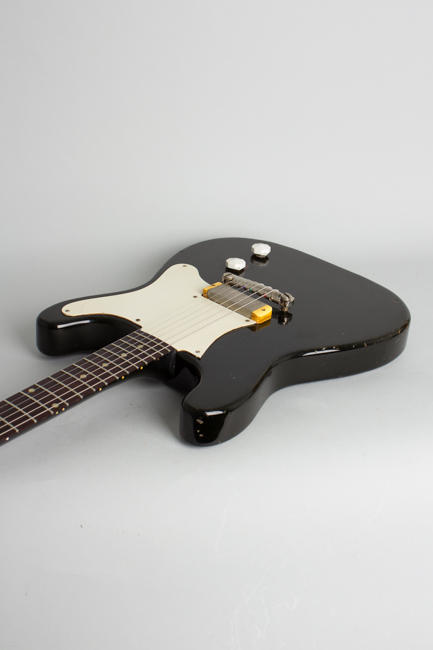 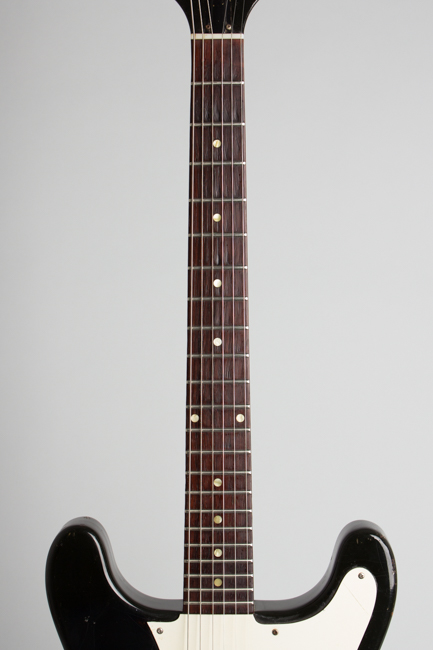 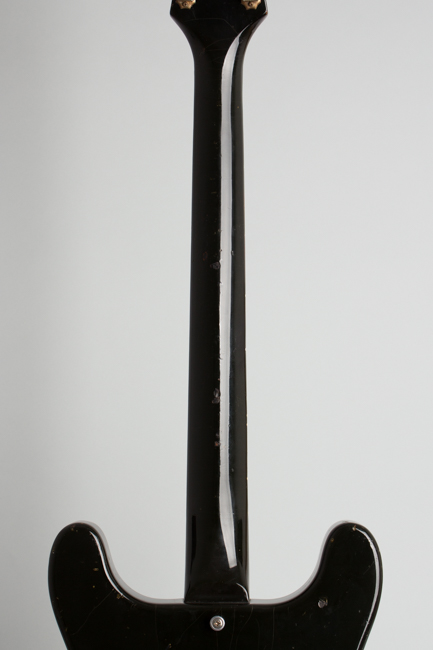 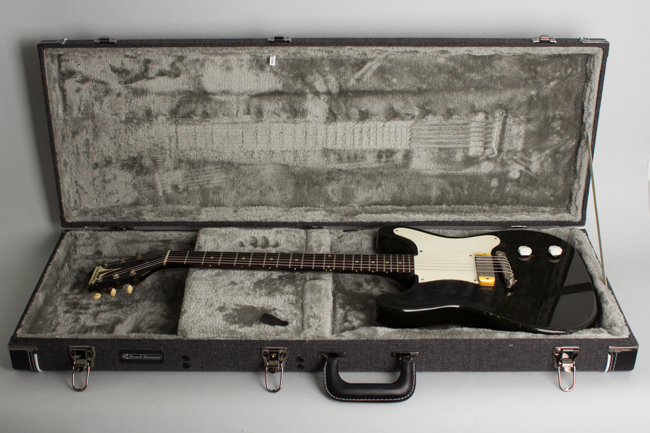 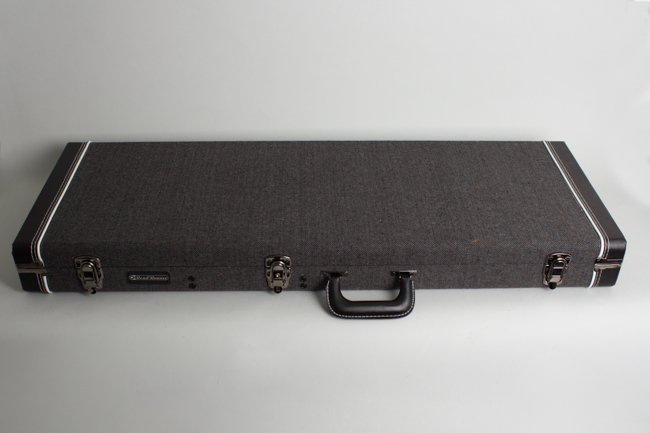 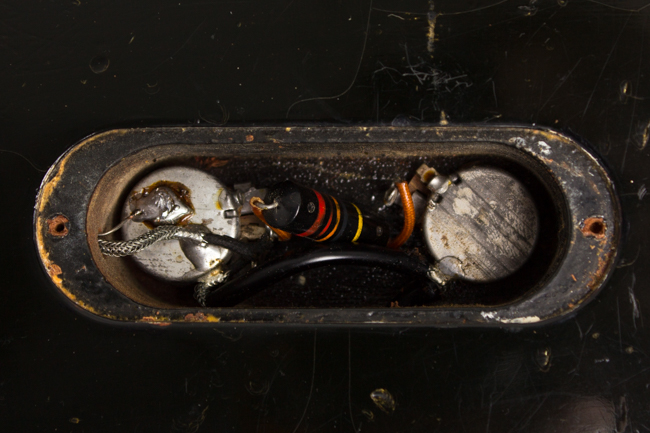 This unusual tuxedo-finished slab-sided solid body guitar is one of the very earliest Epiphone-branded instruments made in Kalamazoo, as Gibson was just re-starting the brand they had purchased in 1957. The first-generation Coronet is a rare instrument made only from the tail end of 1958 through late 1959 and one of the least known of all Gibson made solidbodies. Gibson seemed unsure exactly what to do with the Epiphone brand, and these initial solidbody offerings are quite distinctive, if largely unknown today (or even at the time!)

This single-pickup Coronet is one of the first two production solidbodies to bear the Epiphone name, introduced alongside the more deluxe (and exceptionally rare) two-pickup Crestwood. Available figures indicate none of these shipped in 1958, all of 237 in 1959 and a further 221 in 1960 which already showed a number of feature changes. Samples of the new Epiphone line were first shown at the July 1958 NAMM show, but orders were scarce and production was slow to get up to speed. Epiphone's solidbody designs were streamlined in 1960 with contoured bodies and more typically Gibsonesque features, leaving these initial first-year examples as mostly forgotten experimental orphans.

The Coronet was designed as a student instrument akin to the 1959 double-cutaway Les Paul Jr, which it resembles in some ways. The body is a 1 3/4 inch deep slab of mahogany with somewhat squared-off edges vaguely reminiscent of a Telecaster, albeit with a second full cutaway. It is interesting to note that Gibson appears to have been experimenting with Fender-like design elements with this second-line brand. The finish is ebony lacquer overall, something Gibson only offered as a custom finish on their namesake line. Combined with the single layer white pickguard (another Tele-like feature) this gives a dramatic "tuxedo" look unusual in a period Gibson.

The hardware is a mix of original New York Epiphone and stock Gibson fittings. The older Epiphone parts sent up to Kalamazoo were used as long as they lasted. The single "New York" pickup is the simpler version without adjustable poles. Particularly when mounted in the bridge position this unit has a unique sound, with less output but brighter than anything from Gibson with a snarly edge. As Epiphone in New York had never made any solid body instruments the only place they appear on one is with these first Kalamazoo Crestwoods and Coronets.

The electronics rig is a simple tone and volume set up, including the large 'bumblebee' tone cap much beloved of Les Paul aficionados. They are topped off with white pointer knobs, of a type used by Epiphone since the 1930's. The stop tailpiece/bridge is the same fitting found on the Les Paul Junior. The tuners are likewise the familiar Kluson strips. The neck is unusual for a Gibson-made instrument, fairly shallow with a noticeable "V" contour. The truss rod is adjustable, but is a NY Epiphone style piece, not the standard Gibson fitting; they did not waste ANYTHING at Kalamazoo!

The Coronet listed at $132 in 1960, roughly equivalent to a Les Paul Junior. The entire instrument has a sort of 'feeling your way' aspect about it and it is possible Gibson's management were unsure exactly what the market would be for this 'Non-Gibson' solidbody. In some ways this is as close as Gibson got to making a Telecaster, although of course with a rather different feel and sound. This is a super cool guitar in both looks and sound, brighter and cleaner sounding than the Junior with a lower output but a very snarly tone when pushed.

This guitar shows a decent amount of general wear and tear but remains mostly original and a very good playing example of this seldom-seen instrument. The finish overall has numerous scuffs, scratches and dings; some larger chips in the black lacquer have been filled in. There are numerous chips to the headstock edges but the back of the neck is comparatively clean with some dents and dings. The pickguard has some scuffs and nicks and one noticeable scratch on the lower horn.

The headstock logo plate looks to have fallen off several times; it was once glued back in place and is now pinned more heavily than it originally was. The face of the headstock shows some glue marks and scarring from this activity. There is a small touched up spot off the volume control that may indicate a minimal crack repair in that area, but if so nothing is visible. There are no other cracks or structural repairs, and the heel is perfect with no repairs in that oft-damaged spot. The tailpiece/bridge is a correct style re-issue; all other parts are original.

The original large '59 style frets have been neatly crowned, there is some divoting to the fingerboard but nothing excessive. This is an excellent playing if somewhat eccentric guitar with its own unique tone. It overdrives differently from the Les Pauls it was built alongside, with a snarl rather than a roar. It includes a modern HSC that fits well. Very Good + Condition.
×