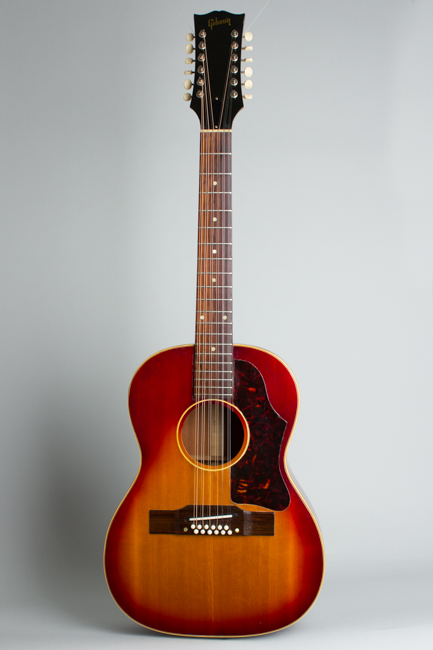 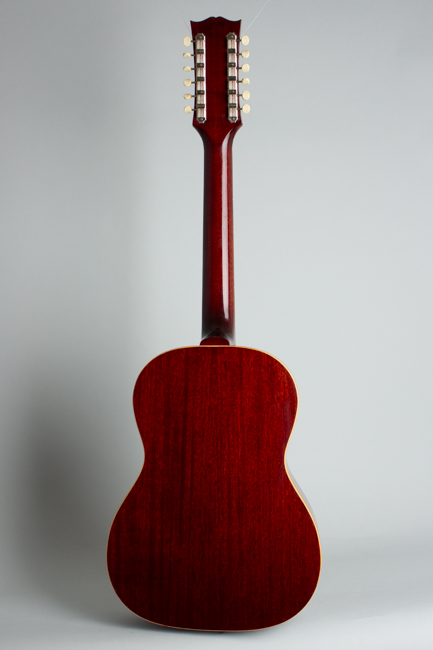 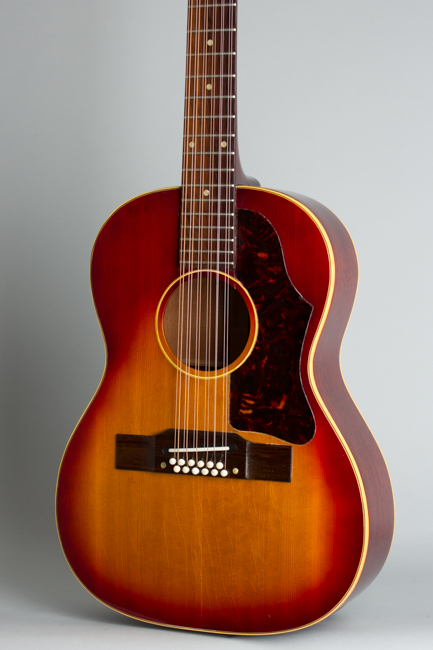 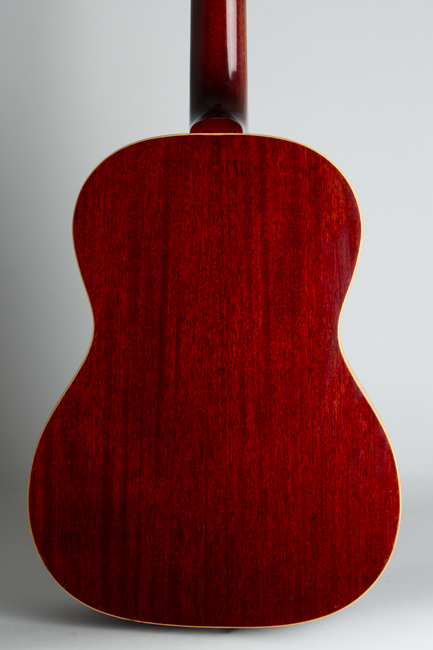 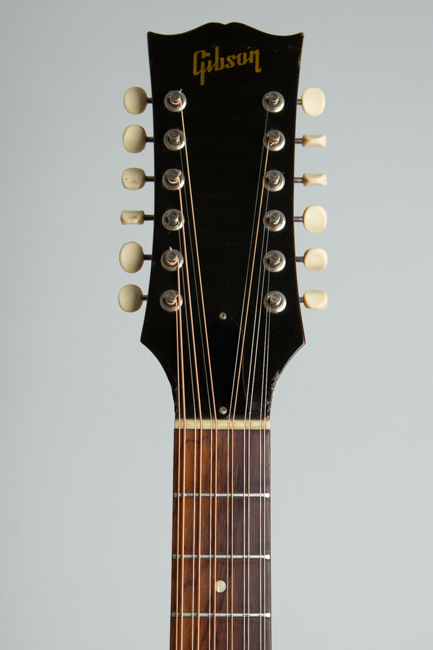 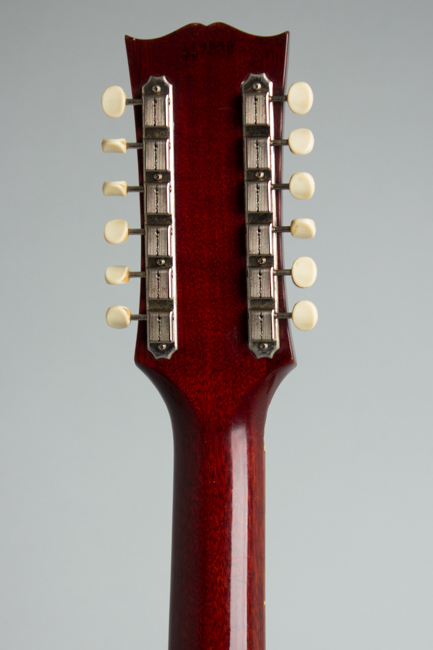 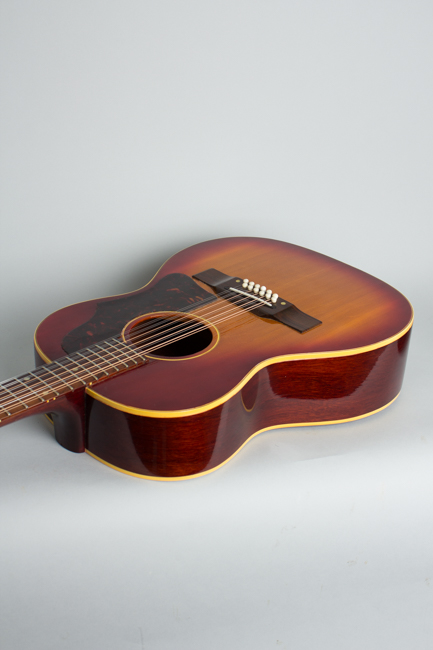 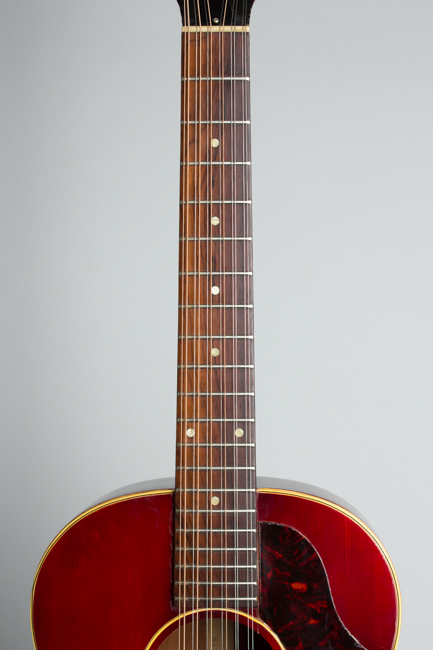 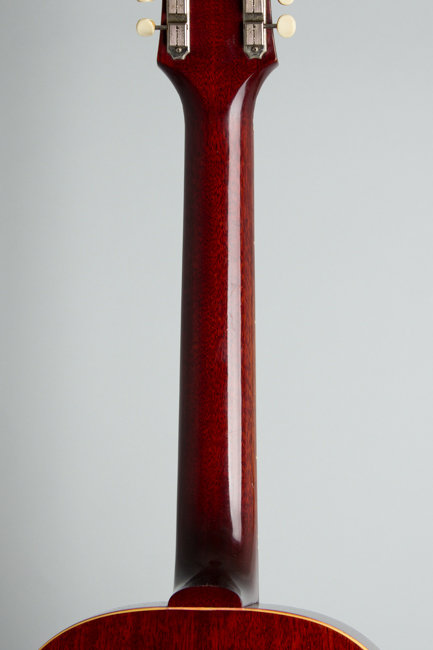 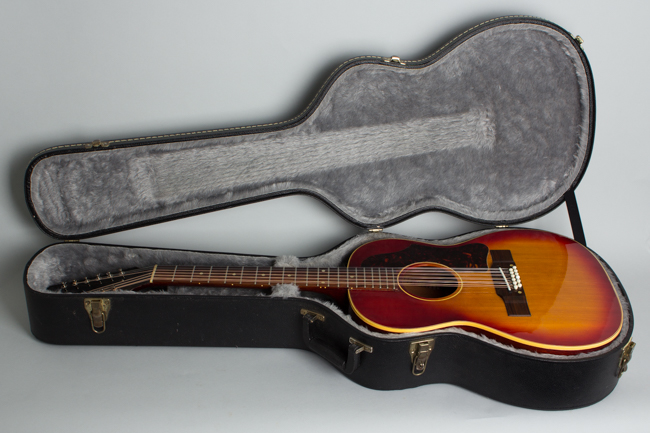 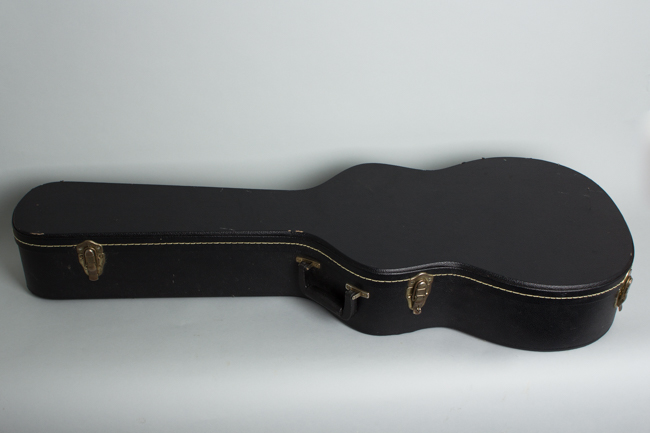 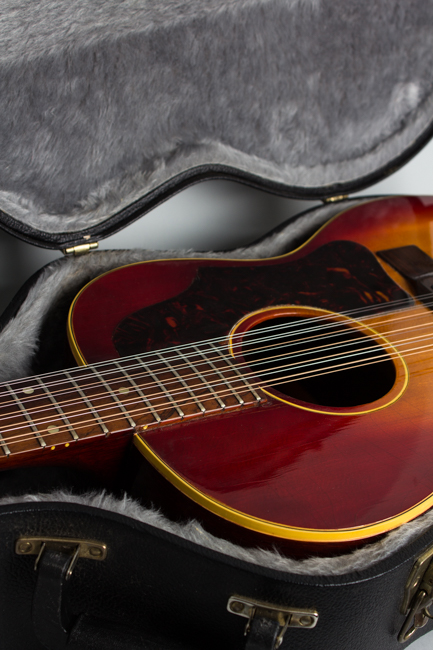 This is nice example of Gibson's 1960's small-body flat-top 12-string, the B-25-12. It guitar features a triple bound cherry sunburst spruce top with an rosewood belly pin bridge on a mahogany body. This example represents the earliest and best-sounding variant of the model, as Gibson quickly went to a pinless bridge and tailpiece design for these guitars, which reduced the stress on the top but also changed the tone. Other period features include the large tortoise celluloid pickguard and Kluson deluxe tuners strips with plastic buttons.

The B-25-12 has a big but comfortable round-backed mahogany neck with unbound dot-inlay rosewood fingerboard. The model was introduced in late 1962 but not produced in quantity until the next year when 301 sunburst examples were shipped, this one included! This is not a huge quantity for a time when the folk boom was still roaring making this first version with the original pin bridge fairly rare.

This guitar has had some typical repairs but remains a nice example and plays and sounds very well. These smaller-body Gibson 12-strings guitars have an lush open strummed sound that records very well and recalls 1960's pop-folk records by groups like the Seekers or the Silkie. Even Johnny Cash had one for awhile in the "folk" era!

Overall length is 42 in. (106.7 cm.), 14 3/8 in. (36.5 cm.) wide at lower bout, and 4 1/2 in. (11.4 cm.) in depth at side, taken at the end block. Scale length is 24 3/4 in. (629 mm.). Width of nut is 2 in. (51 mm.).
This guitar shows very little play wear, remaining for the most part original and well preserved. There is some light finish wear overall with small dings and scuffs but really it does not look much played. There are repaired spruce grain splits to the top off the treble side of the fingerboard and the top edge of the pickguard, solidly sealed and cleated underneath. The original finish has only some tiny touch up in these areas.

The neck has been reset, with some minor finish disturbance along the heel and bass side of the fingerboard. The original adjustable saddle has been removed and replaced with a set saddle unit which is generally felt to improve the tone. The parts are preserved in the case pocket and the bridge could be restored to its original configuration, although few would want do that! As is often the case with older 12-strings this one shows some slight top arching behind the bridge, albeit considerably less than we often see on this model. It plays very nicely and sounds like it should, with a warm jangle and sweet midrange sheen. A more modern HSC is included. Overall Very Good + Condition.
×