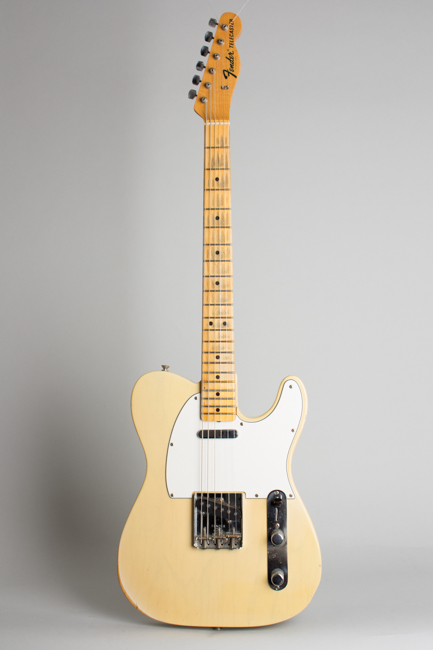 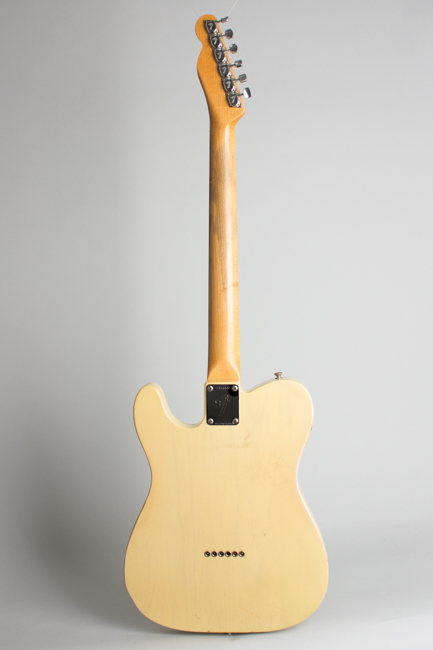 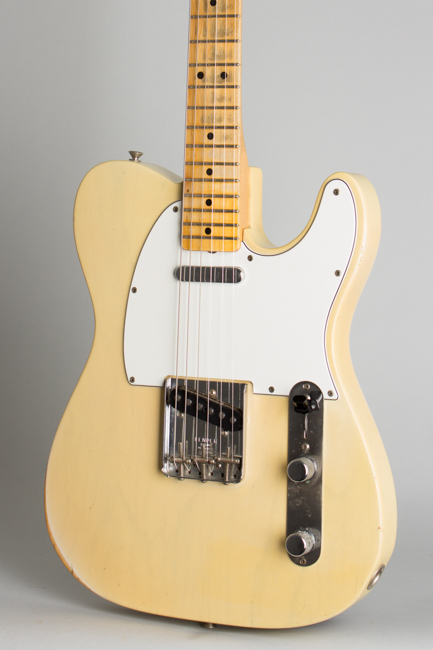 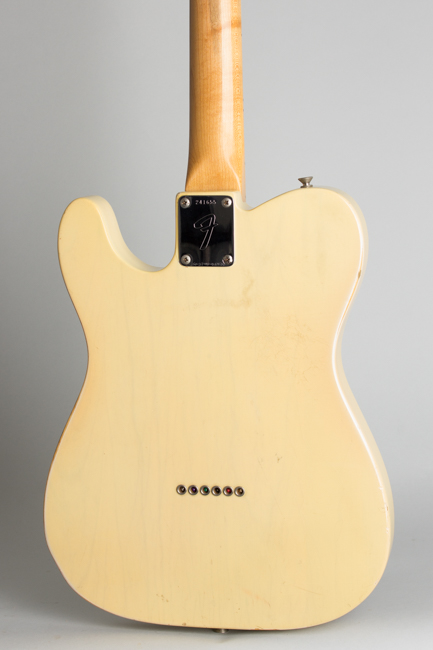 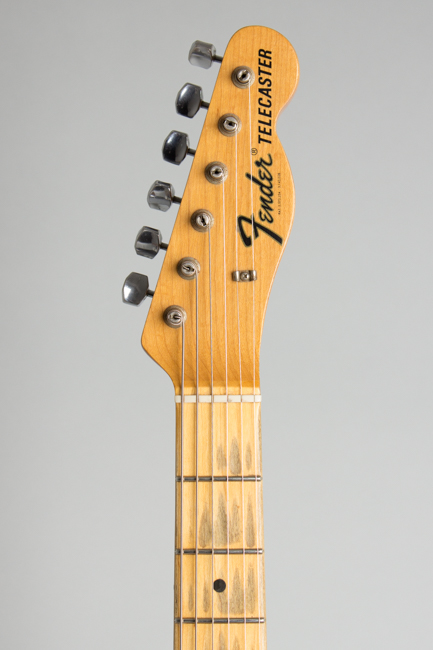 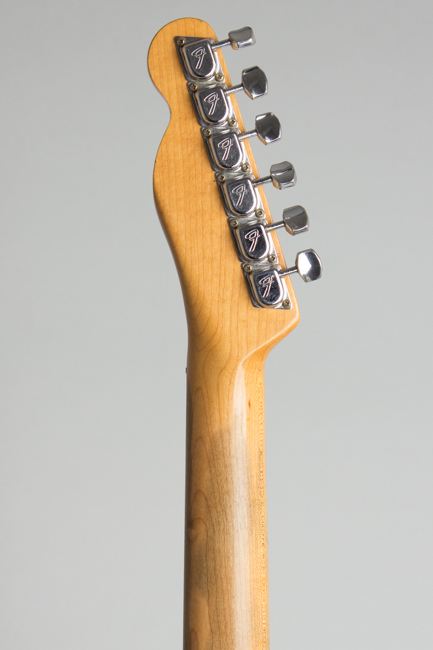 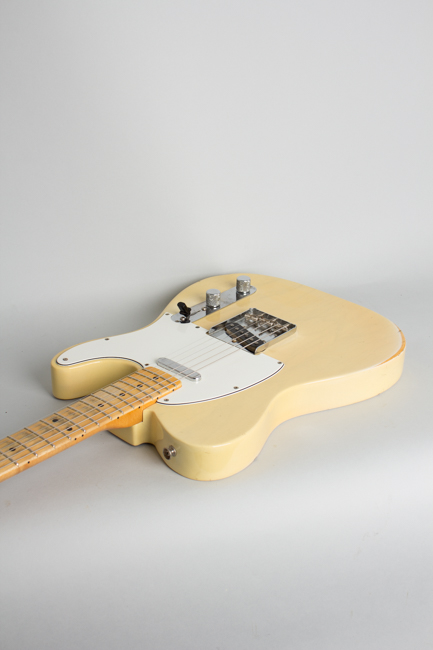 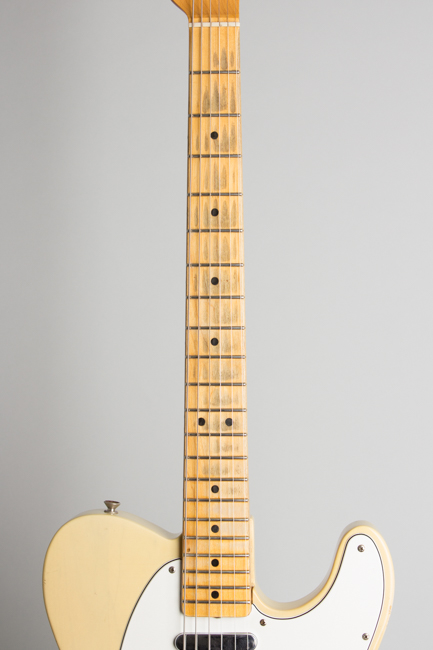 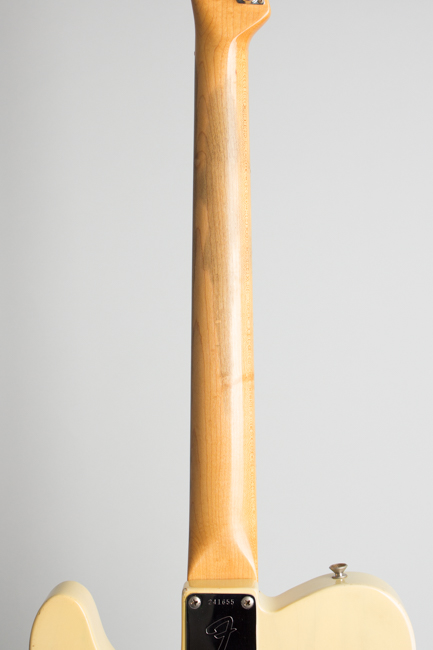 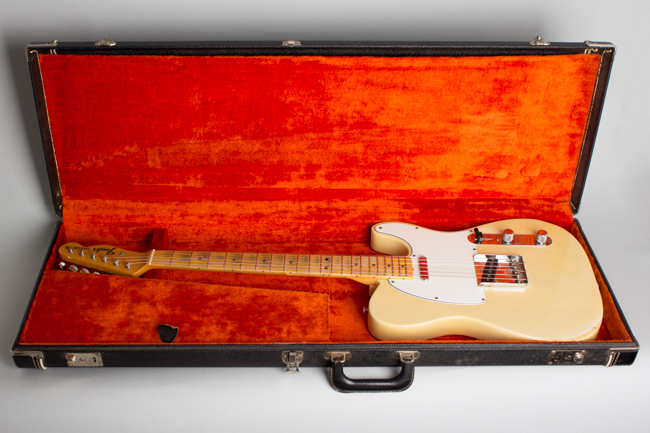 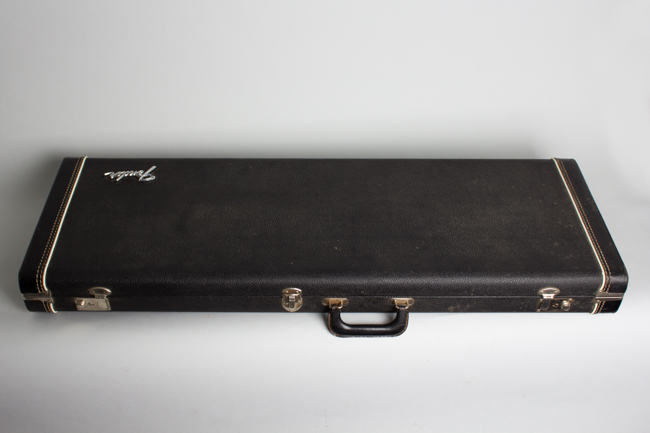 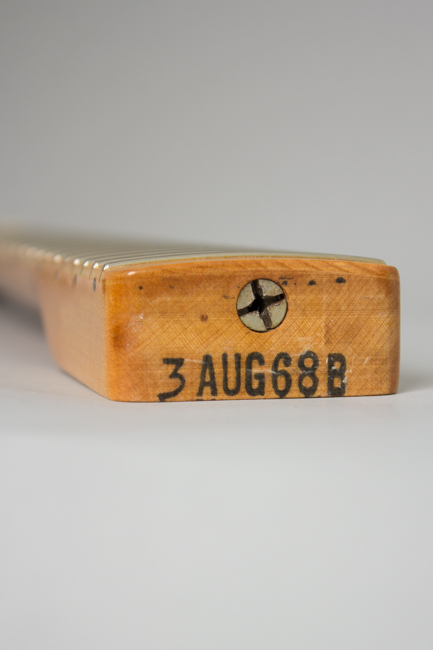 This is a fine example of a Fender Telecaster from the summer of 1968, with a mix of features particular to that early-CBS era. The neck is dated August 1968, built with a separate maple 'cap' fingerboard as they had been for several years at that point. The original 1950's style one piece maple neck would be re-introduced only months later but when this guitar was assembled the maple fingerboard was still a special-order option. The Fender logo on the headstock is in the newer style which had been introduced the year before, for better visibility on TV according to CBS theory. The tuners are the newer style Fender "F" logo style that replaced the venerable Klusons in 1966.

The neck is still finished in the older style lacquer, with the decal underneath the top clearcoat on the headstock. The body is in the transitional blonde finish with some modicum of ash grain visible. This particular guitar has stayed truer to the original hue and yellowed less than many over 50+ years. The bridge still has the traditional threaded steel saddles used since the 1950s.

The pickups are wired with the old-style cloth leads, in this period color coded for the assembler's convenience. The pots date to 17th week of 1966 when a huge quantity were bought in by the CBS purchasing department, which lasted into the 1970s. At 7.35 LBs this guitar is somewhat lighter than many late-60's examples and still has the '60's Tele sound and character in spades, unfortunately soon to be buried under layers of thick-skin CBS polyester.

This is a great sounding and perfect playing "early CBS" Telecaster with the crackling bright tone typical of the later 60's guitars. It shows some average play wear, most notably to the length of the fingerboard -- this was not a "cowboy chord" player's guitar! The back of the neck has some areas worn to the wood, but not as heavily as the fingerboard.

Some traditional Tele body edgewear is evident, but other than that it shows only small dings, dents and scrapes. The back is cleaner than many overall with no heavy belt buckle wear. The finish has yellowed less than many, with only some minor darkening visible compared to the area under the pickguard. All hardware is original, there is some minor corrosion to the control plate area and plating wear around the volume knob, which someone turned a lot. The neckplate has an old driver's license number etched discreetly into the bottom edge, one has to look pretty closely to notice it. There is a tiny chip off the top layer of the pickguard by the rear upper screw hole.

The only other alteration to the guitar is a refret with wire somewhat wider than the original, but not in massive jumbo fret territory. These are a bit taller than vintage Fender frets as well, but could be flattened if desired. From the amount of wear to the fingerboard the original frets were likely worn beyond use some time ago. The nut has been shimmed up slightly to compensate for the taller wire.

Other than the fretwork this is a very well preserved 'maple cap' guitar, something of a rarity in this condition if not extremely so. Many of these have been stripped or otherwise altered in the years since, when they were just considered "player's guitars" and not particularly valued. This Tele handles beautifully and has the snappy 60s sound in spades on the bridge pickup, mellowing down nicely when the neck unit is blended in. Telecasters enjoyed a spurt of popularity in the later 1960's and were built in some quantity, but the later one-piece maple neck instruments with the overall Poly finish are more commonly found today. It includes a nicely preserved OHSC. Excellent Condition.
×