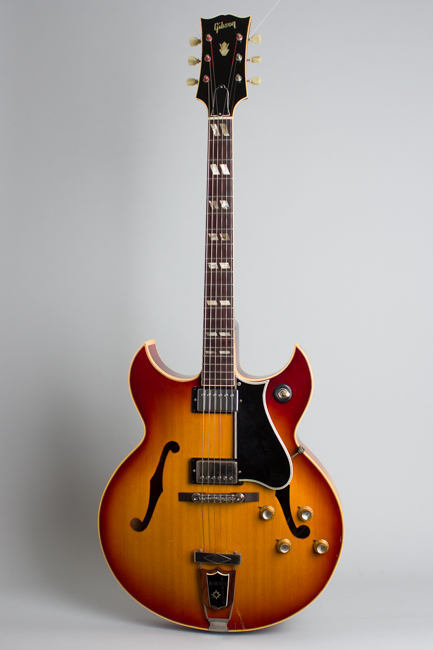 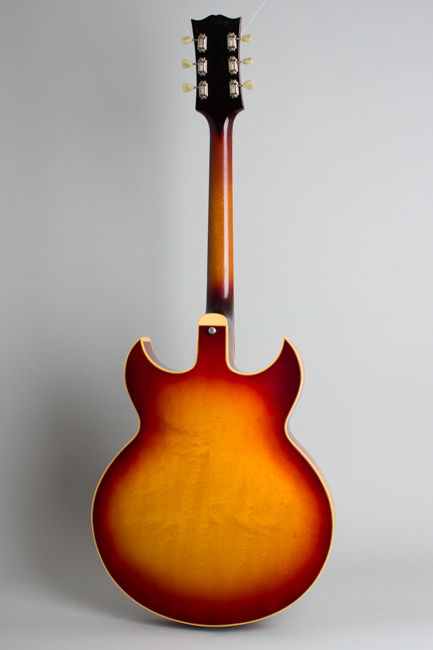 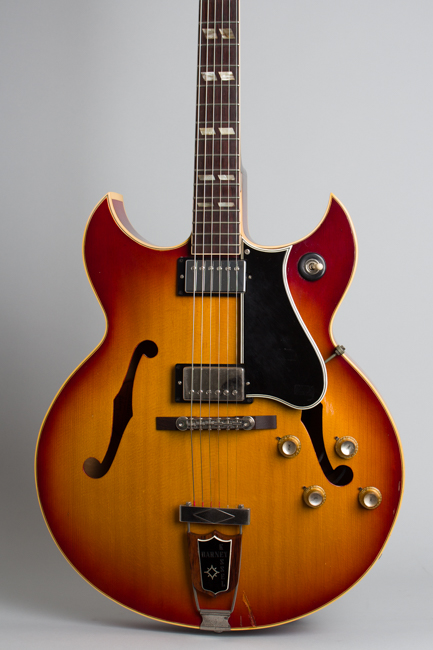 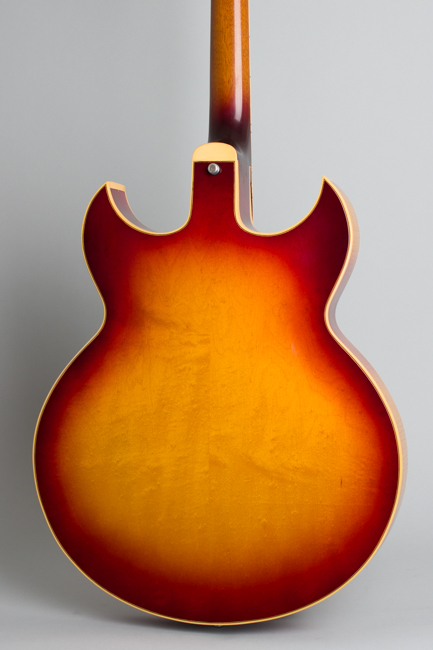 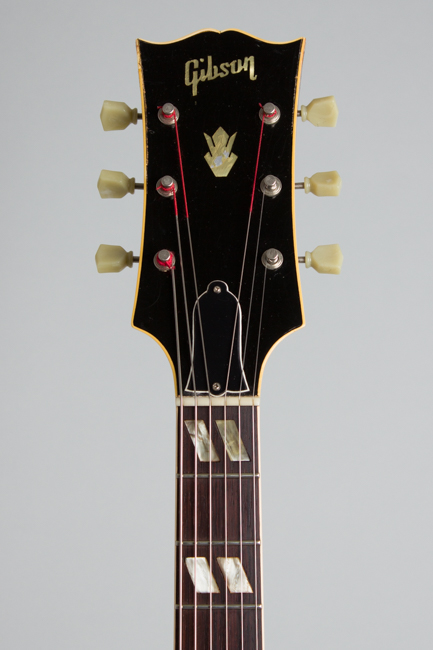 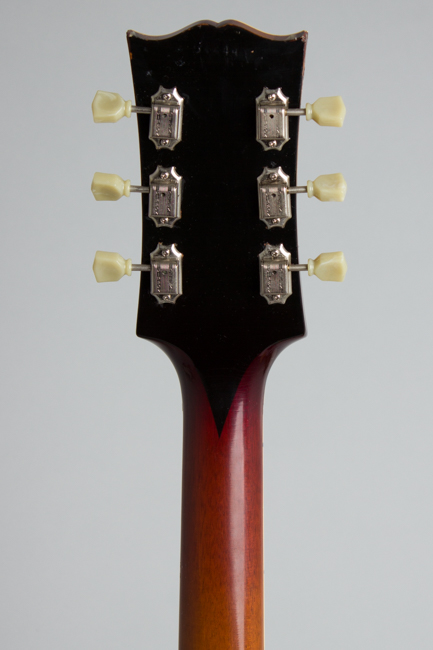 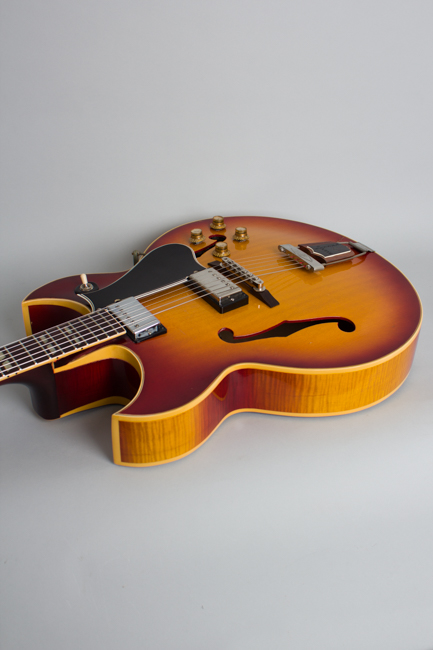 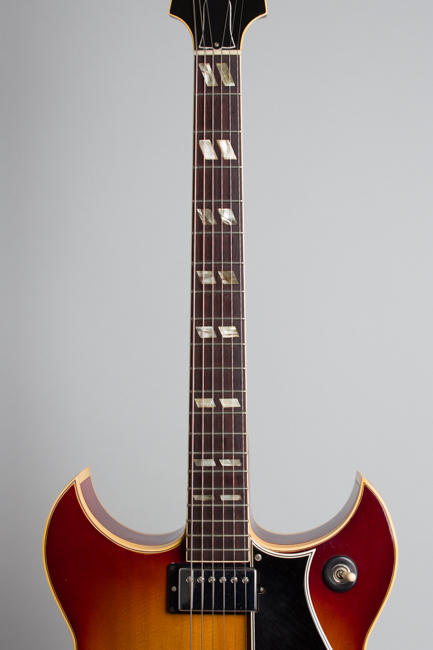 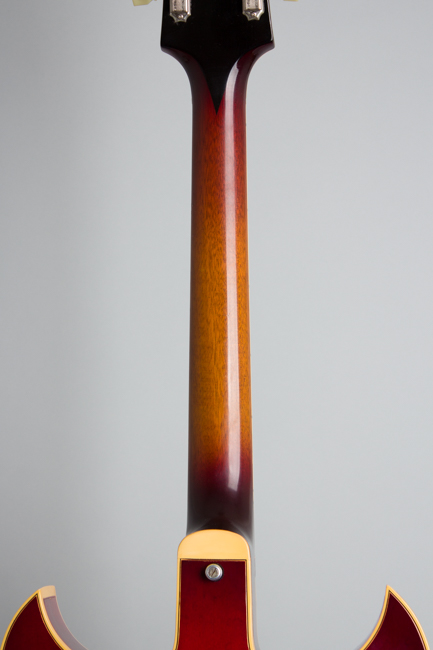 This is a fine player's example of one our favorite and more eccentric 1960's Gibsons, the Barney Kessel Regular. In the early '60s Kessel himself was on a hot streak, having just won the DOWN BEAT poll 3 years running. Around 1960 he was induced to switch his endorsement from Kay (whose guitars he called "terrible") to Gibson, whose guitars he played anyway. How much input Kessel himself had in the subsequent design can be debated, but it is certainly a distinctive instrument then and now.

The Kessel Signature model's most notable feature is a 17" wide body with a double sharp "Florentine' cutaway, a new idea at Gibson at the time. The model was offered in "Custom" or "Regular" form built on this same body, differing mostly in cosmetic details. This is an early example of the Regular model, with the laminated spruce top and longer heel joint that would both be changed in 1963.

This instrument is in good playing and cosmetic condition but the bulk of the hardware is reproduction, a not uncommon situation for the early 1960's Jazzier models in the age of Les Paul clone worship. This guitar would have originally had either PAF or very early Patent # pickups that have no doubt since found a solidbody home.

Even in this altered state this is a fairly rare guitar, with only 153 shipped in 1962. The Kessel model was not a huge hit when new but was featured by a few other notable 1960s players including Trini Lopez, who based his subsequent signature model on it, Bryan Maclean of Love and most notably Gene Cornish of the Rascals. Cornish was the model's most dedicated user, playing one through much of his career with the band and having several custom black-finished models made. Although no longer fully original this early BK is still a visually striking guitar as well as a fine playing instrument.

Overall length is 43 3/4 in. (111.1 cm.), 16 7/8 in. (42.9 cm.) wide at lower bout, and 2 7/8 in. (7.3 cm.) in depth, measured at side of rim. Scale length is 25 1/2 in. (648 mm.). Width of nut is 1 5/8 in. (41 mm.).
Cosmetically this guitar shows some light general wear but remains in fine condition overall. The finish has some fine checking and shows minor dings and dents. There is one deep gash in the top just below the tailpiece that has been roughly touched up, that is the only really notable spot of damage. The pointed tips of the headstock look to have caught a few hits over the years, and have a bit of touch up work visible. The back and back of the neck are very clean with hardly any wear.

The guitar has been very nicely refretted with period correct wire and is an excellent player. As noted much of the hardware has been replaced with correct style later reproductions including the pickups (Gibson Classic 57's), the entire wiring rig, the Tune-o-Matic bridge and base, strap buttons and the tuners, which appear to be 1970's Klusons with "Gibson Deluxe" stamped on the covers. The knobs and pickguard remain original, the tailpiece appears original although the mounting screws are not; the logo block between the tines definitely is. This is an excellent player's piece, no longer in fully "collectible" condition but a wonderful gigging or recording example of Barney's namesake nonetheless. Overall Excellent - Condition.
×