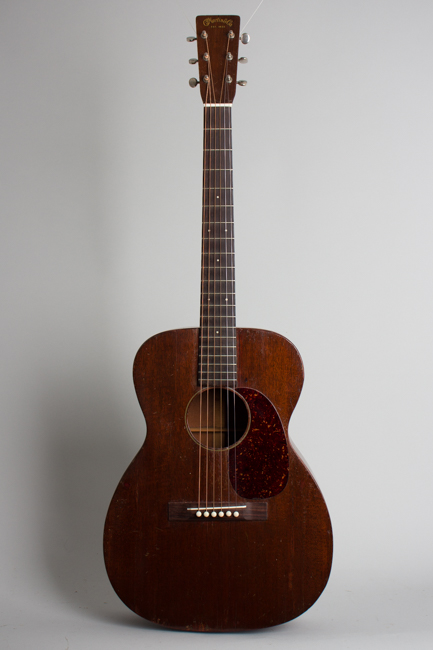 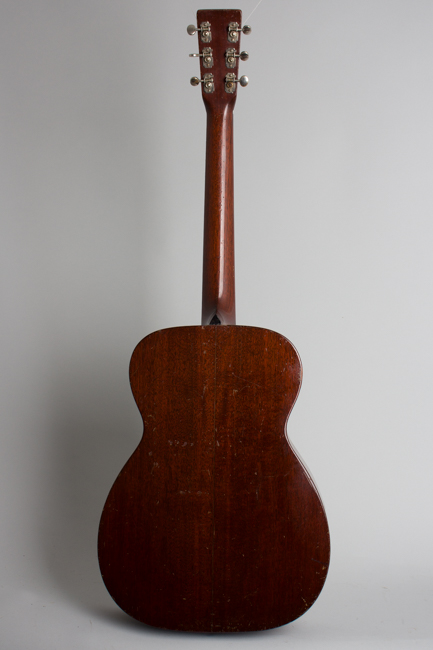 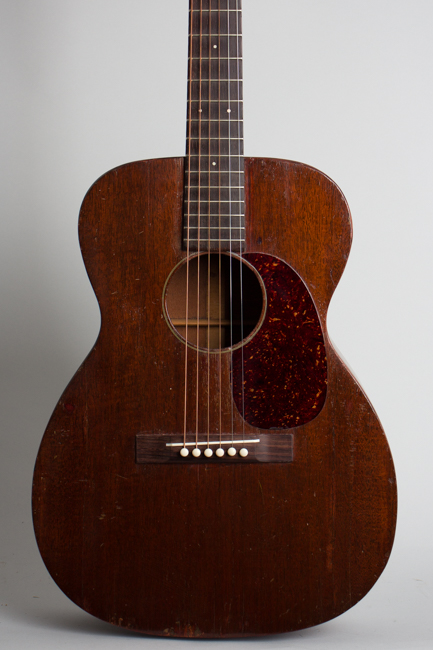 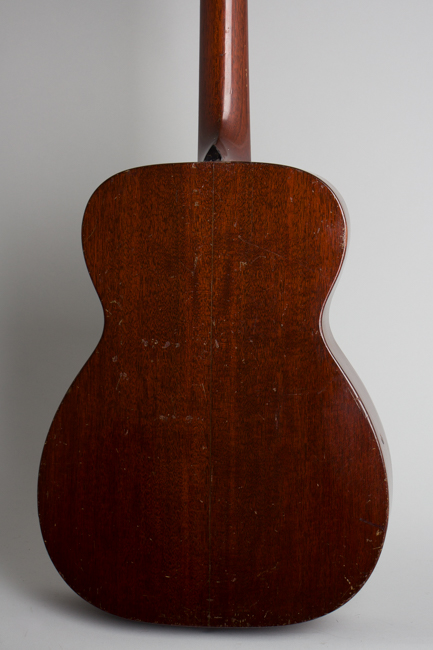 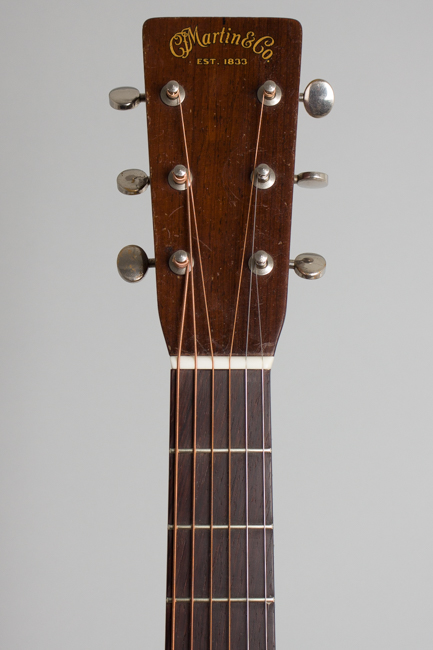 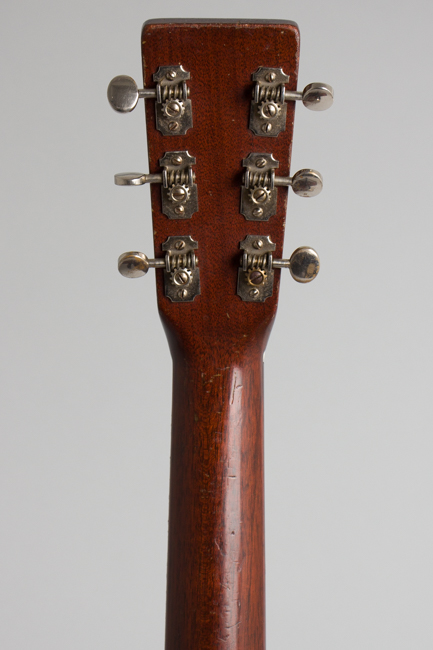 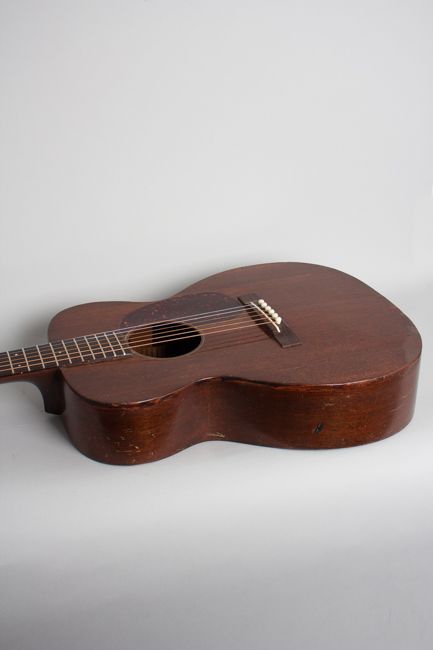 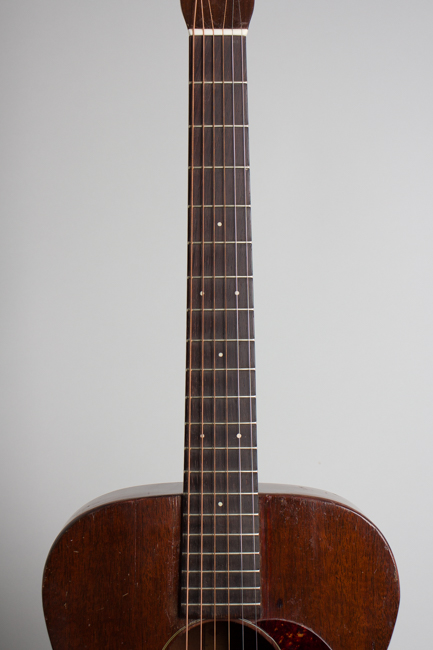 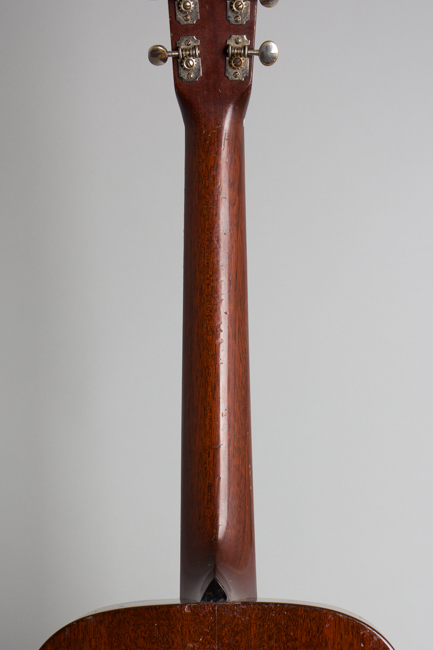 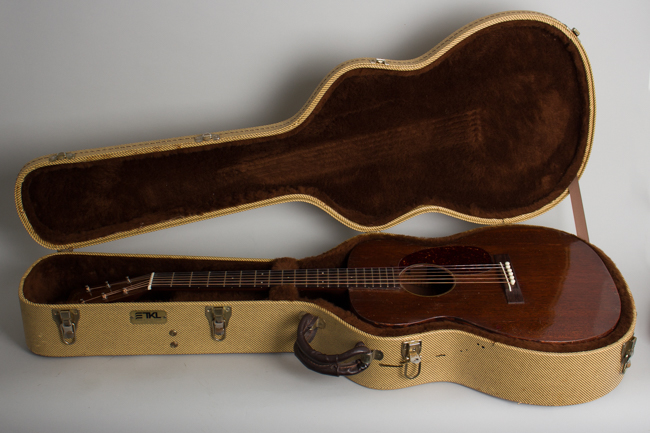 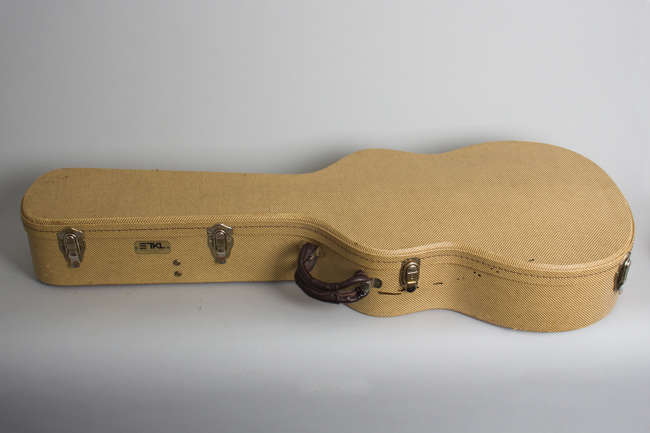 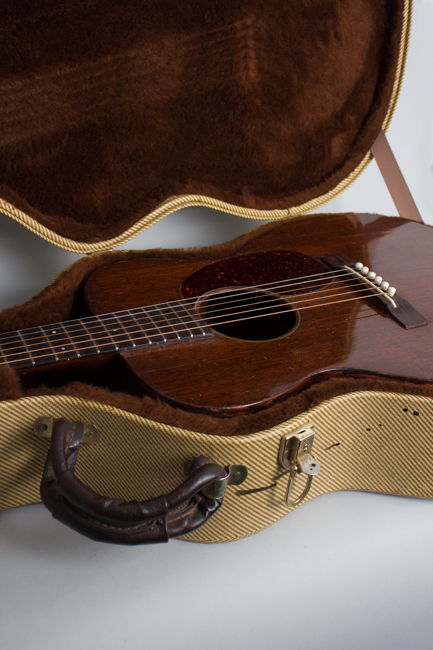 This pre-war Martin 00-17 is heavily worn with numerous old repairs, a player piece rather than a collector's instrument in condition we like to call (in honor of Riley Puckett) "Ragged but Right". The guitar dates to late 1936 and has obviously had some adventures since then but is still a fine player maintaining the crisply defined yet warm sound these all-mahogany Martins are well-known for. This is a pre-war Martin you can take out for bar gigs!

The 00-17 was the largest style Martin offered in the all-mahogany format. Even though the overriding idea was economy (this was still the depression) they were built to the same extremely high standard as all Martin instruments. There is no decoration and no frills -- just a plain and simple tone machine. Typical features for this late pre-war period include original individual Waverly openback tuners, a small straight rosewood bridge and a tortoise celluloid pickguard. These mahogany-top guitars have a distinctive ringing "dry" tone and are excellent fingerpickers as well as a great all-around choice in a vintage Martin that won't break the bank. The pre-war 00-17s with scalloped bracing offer an extra sweetness in the mids, sometimes less evident in the postwar models.

As noted this is a very well worn but structurally solid guitar. Some of the repairs are not the cleanest or most attractive but the instrument is still a fine player's instrument. Among the catalog of cosmetic defects are numerous repaired cracks, touch ups, areas of missing or sanded down finish, overspray in spots, checking to the finish, dings, dents and lots of play wear and a replaced pickguard. The guitar has recently been refretted with a new bone nut, and the bridge has been replaced with a slightly larger replica than original spec. with an correct style through saddle.

The top cracks start at noon and go all the way around the clock. There is a small repaired split right where the soundhole rosette meets the fingerboard extension. A crack next to the fingerboard extension on the treble side has shifted a bit and distorted the soundhole rosette slightly. A finger-brace has been added inside to stabilize this. Another short crack lies next to the pickguard near the waist on the upper bout. There are two long cracks in the treble side lower bout running from near the treble side waist to the bottom edge and a third short crack nearby.

To complete the tour of the top, there are two dime-sized patches of missing-and-then-touched-up finish, one on the bass side near the waist and another in the same position on the treble side. There are also several small touched up chips around the bridge and the pickguard is a correct but obviously more recent replacement. Everything is completely solid, but a lot of it is not pretty.

The sides are comparatively well preserved, with a long area of fill, touch up and finish loss running around most of the area where the top meets the bass side rim and a six inch long crack on the treble side rim at the apex of the lower bout. The upper edge shows a deep dig into the wood filled with some sort of black wood putty.

The back has deep scrapes, dings and dents, but only one small inconspicuous crack off the bass side of the heel. Internally in addition to the added finger brace, all of the top cracks are neatly cleated. Amazingly enough the original scalloped bracing and small maple bridge plate are all intact and unaltered. There are two short stress cracks in the heel, though they don't extend to the neck-body joint. The neck is comparatively clean otherwise with dings, scrapes and edge wear around the headstock. The original tuners have somehow survived intact; the low E machine has a slightly later Waverly gear.

While the above catalog of defects may seem daunting, with new frets and a neck set this guitar's playability is excellent and it virtually exudes tonal delight, with the expected crisp highs and a liberal dose of full-range response beneath. Cosmetically challenged and bearing many scars of hard use, in terms of sound and playability this 00 is still a stellar example. Very Good Condition.
×