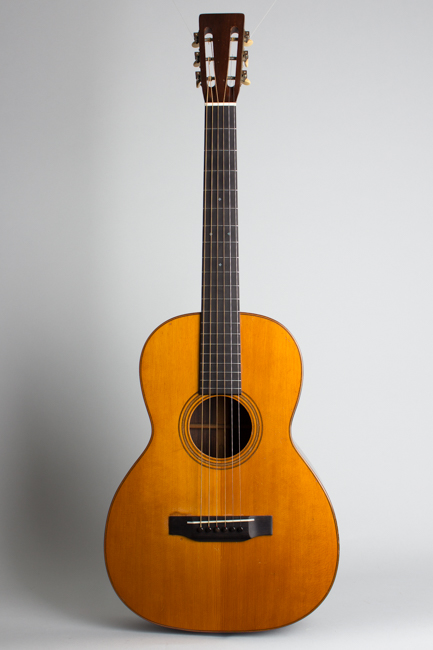 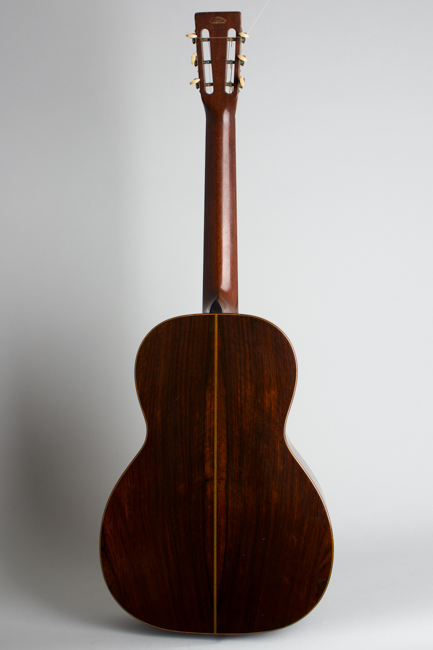 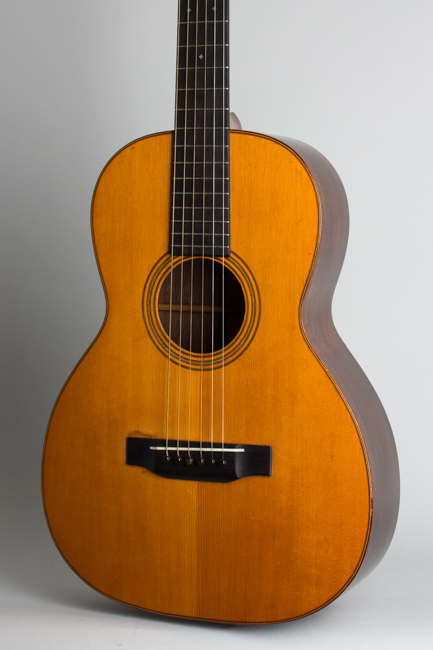 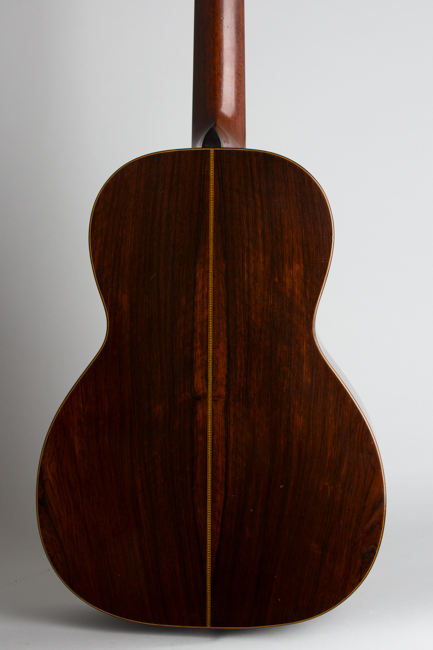 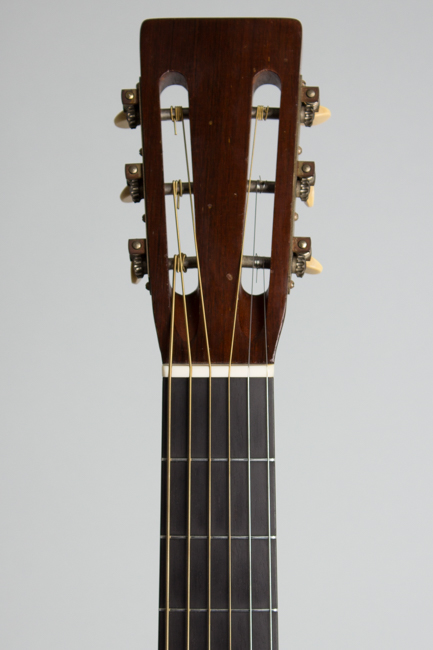 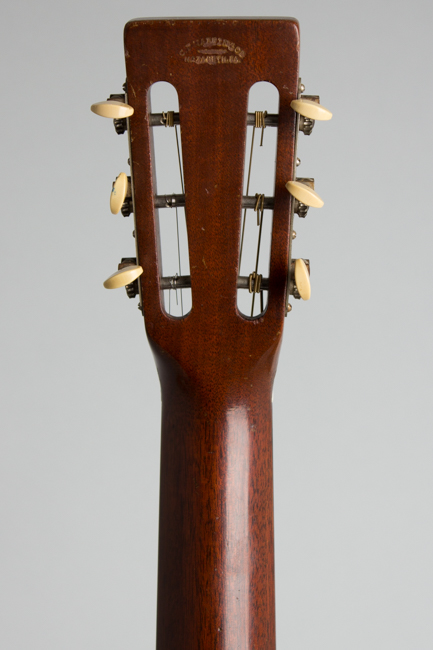 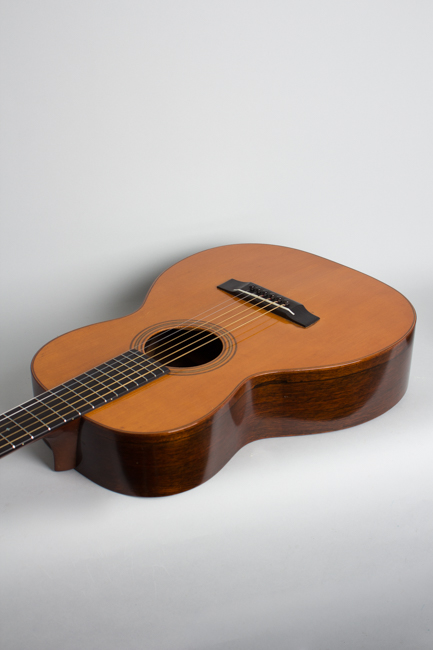 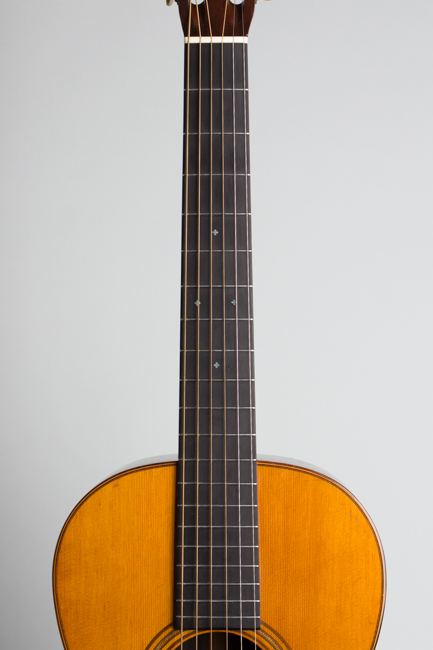 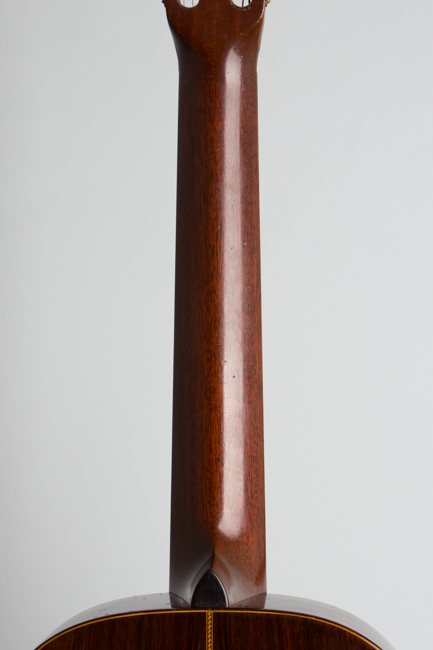 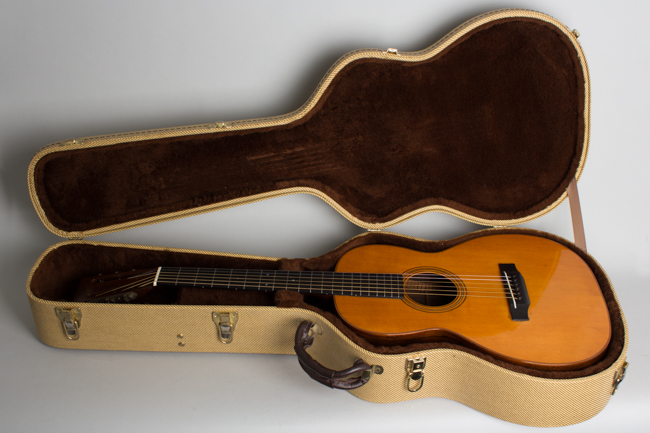 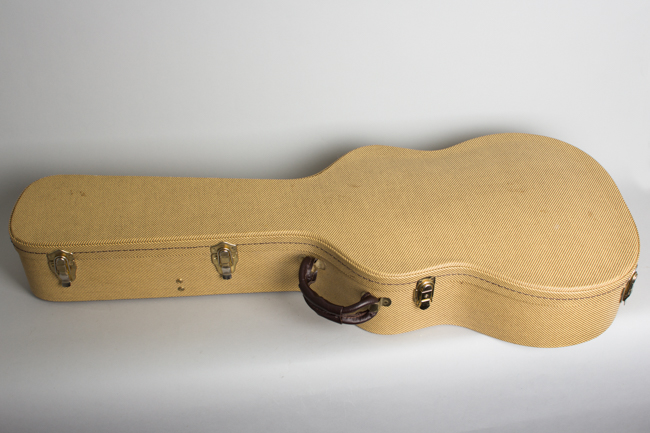 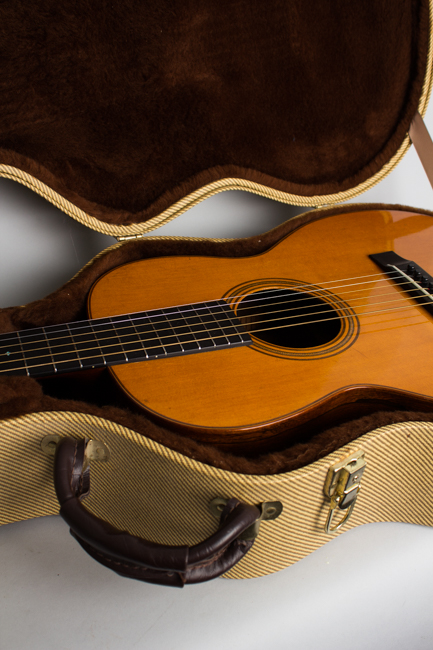 The 12-fret, steel string Martins of the late 1920s and early 1930s are some of our favorite guitars. For just a few years before altering nearly all their designs to the 14-fret neck "Orchestra Model" pattern in the early '30s, Martin crafted (in relatively small numbers) 12-fret Brazilian rosewood flat-tops braced for steel strings instead of the gut used previously. The other features remained pretty much as they had been since the last century, with a slotted headstock and wide fingerboard on the neck which joins the body at the 12th fret. These guitars were the final evolution of the original 19th century Martin patterns before the "modern" 14-fret design became standard a few years later. The 00-21 was one of the few guitars that was not altered to the "Orchestra Model" template in the 1930's and was still built in this form for decades hence, albeit with some modernized features.

This early 1930 00-21 is a nice example from this early steel-string period, with some old repair but surprisingly little wear. The Style 21 designation signifies a midline instrument, the 00-21 being the second smallest rosewood guitar in the company's line, over the 0-21. Models beneath this were built with mahogany back and sides instead of the even-at-the-time costly rosewood. It still maintains the same standards of workmanship as the highest-grade instruments, which is a Martin trademark.

The tight grained spruce top is braced in a delicate scalloped "X" pattern which would be beefed up later in the decade as Martin gained experience with steel strings. This guitar would have been a very early recipient of Martin's new "belly' bridge, introduced in late 1929. The older style straight pyramid bridge had proved to be easily dislodged by steel string tension; the new bridge offered more gluing area with a flange off the back edge that helped re-inforce the top at that critical spot.

The bookmatched Brazilian rosewood on the back has an interesting lighter pattern in the center on either side of the backstrip that would be considered a premium grain today. At the time Martin considered this "flawed" compared to absolutely straight grained wood, so they used pieces like this on a Style 21 instead of a higher priced guitar. The famous "herringbone" trim ornaments the sound hole ring and backstrip instead of around the top edge as with a Style 28; the outer binding is rosewood and the ornamental position markers in the ebony fingerboard are tiny slotted diamonds.

This 00-21 was built fairly early in 1929 -- the serial number is less than a thousand beyond the last registered for 1929. The stock market crash was a recent event, and the Great Depression just starting to loom at this time. This is one of 85 00-21s shipped that year. It would have been priced at $60.00, which seems like a bargain even in period money. Although produced in a larger quantity than some of the higher grade models, this is still a rare guitar today. All prewar Brazilian rosewood Martins were made in small numbers by later standards, and if the original price seems laughable now they were considered relatively expensive guitars in their time.

This guitar has had a slightly oversized belly bridge and a larger-than-original maple bridgeplate fitted but remains in better preserved and more original condition than many 1930-era survivors. Even when braced for steel strings, the Martins from this period are much more lightly constructed than later models and many have suffered structural damage from the heavier strings common in the 1930s and 40s. Even in this slightly altered state this is a wonderful-playing and sounding instrument, a continuing testament to its builder's skill and reputation and at least as fine a 12-fret 00-sized model as anyone has ever made -- then or since.

This is a very fine-playing example of this 1920s Martin classic, with some minor wear and older repairs but no playing issues. The most notable repair is the slightly oversize bridge replacement, in the original belly bridge style but extending a bit farther back on the top than the original. The bridgeplate is made of maple like the original, but is also slightly wider and thicker than that would have been. There is some finish touch up visible around the bridge, mostly on the bass side. It is likely that the top had suffered some distortion from overstringing and this repair has corrected that; the top has an excellent profile now.

There has been a very neat neckset resulting in a very playable instrument. The original bar frets are intact and in excellent condition. The Waverly strip tuners are original; the bone nut appears replaced. The finish has small dings, dents and chips overall but no major loss; this guitar notably has very little picking wear compared to most Martins of this vintage.

Crack damage is also minimal considering the age of the instrument. There is one repaired short grain split to the spruce top, just behind the bridge by the low E pin. There are some grain check lines in the lower section of the rosewood back that look like possible cracks, but internal inspection reveals they never went through the wood. Except for a few small touch ups the finish remains original, with no overspray.

This is a very fine player's instrument and even considering the not-exactly accurate bridge repairs a well preserved one as well. The sound is excellent, robust and quite powerful. The altered bridgeplate may have made the guitar a bit less delicate and responsive as a fingerpicker's instrument but it retains plenty of volume in that mode nonetheless, and makes an excellent flatpicking guitar as well which can be driven fairly hard. Not a perfect survivor of the last 90 years but a fine instrument nonetheless, this 00-21 is in ready-to-gig condition complete in a high quality modern tweed HSC. Excellent - Condition.
×