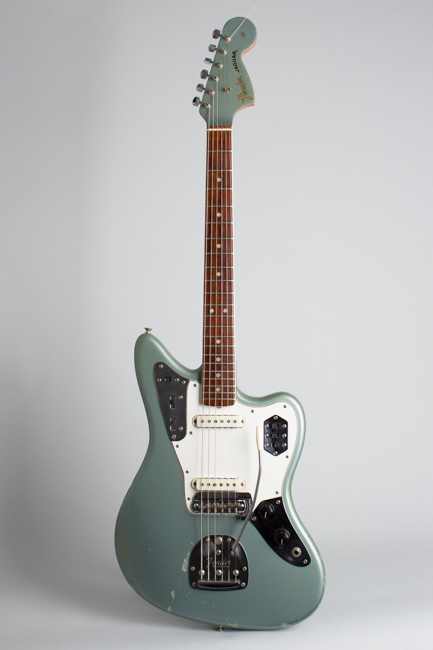 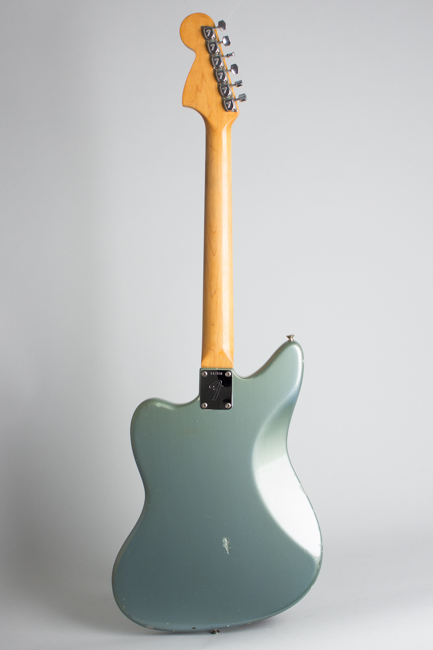 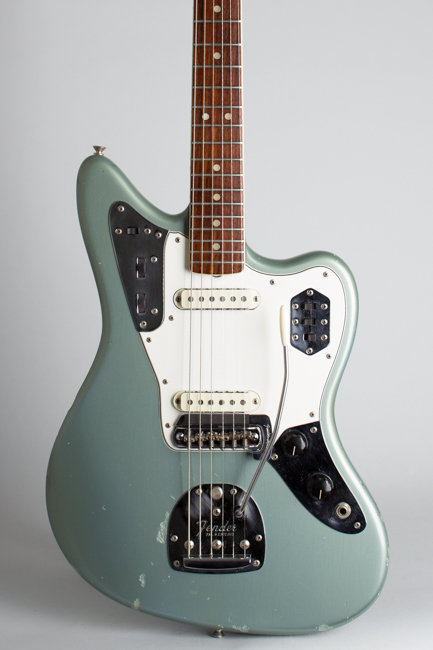 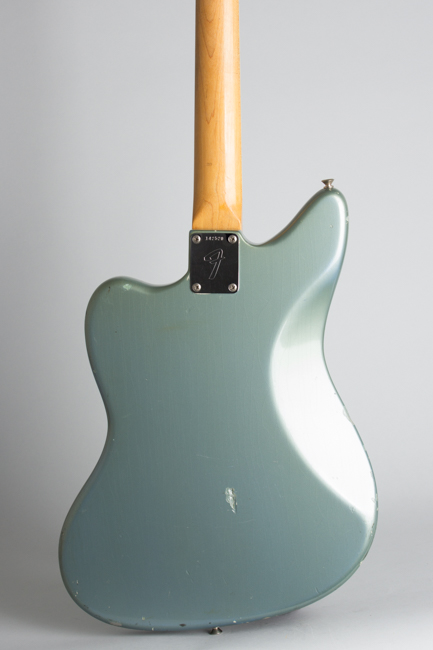 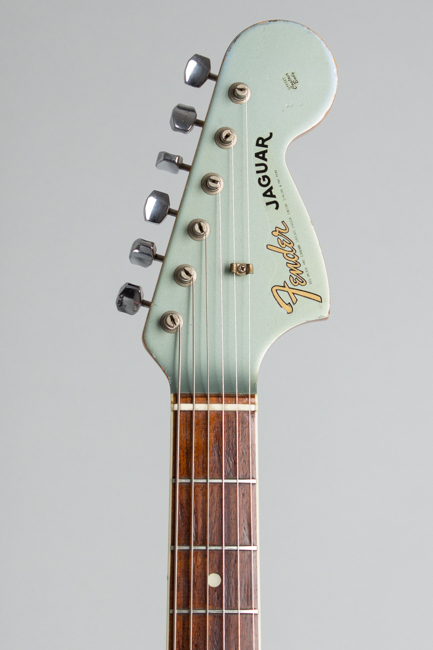 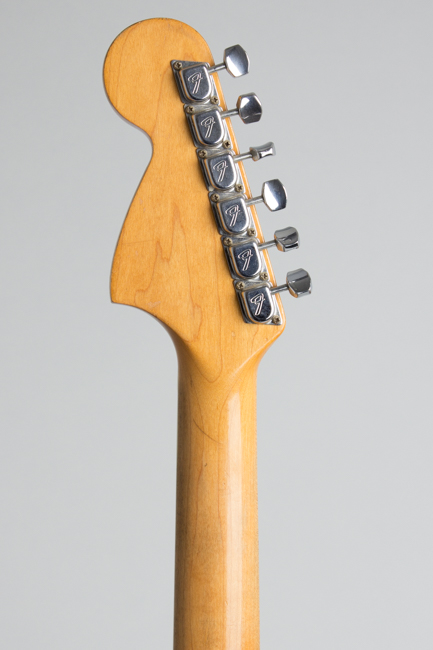 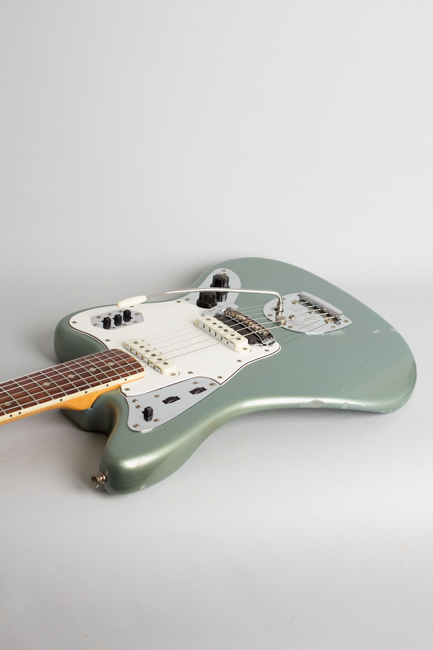 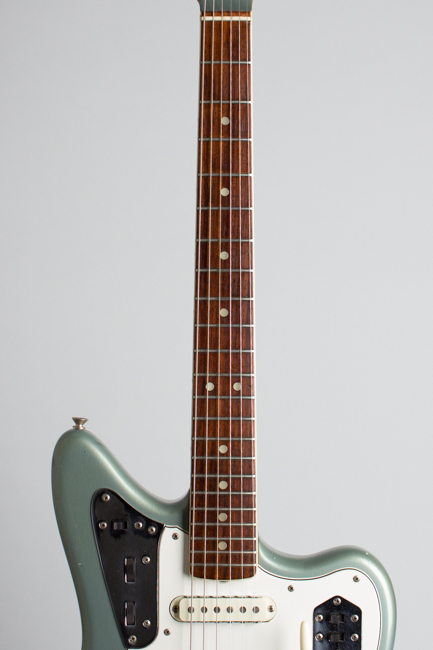 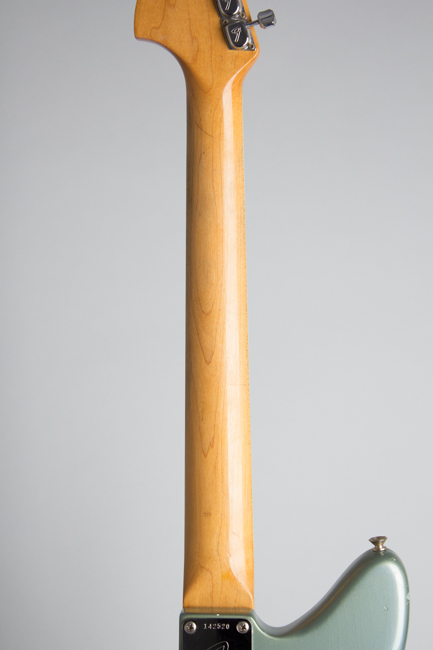 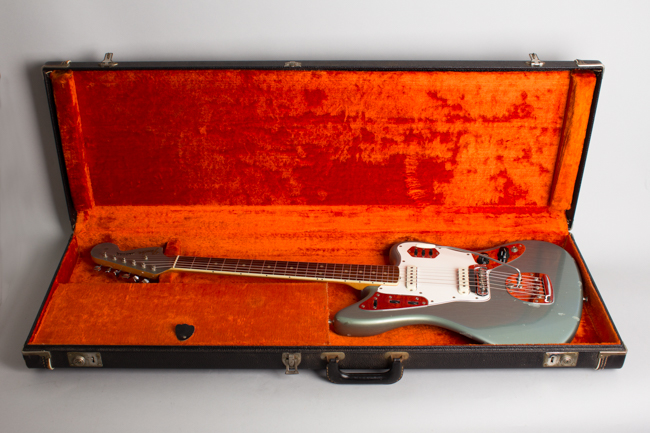 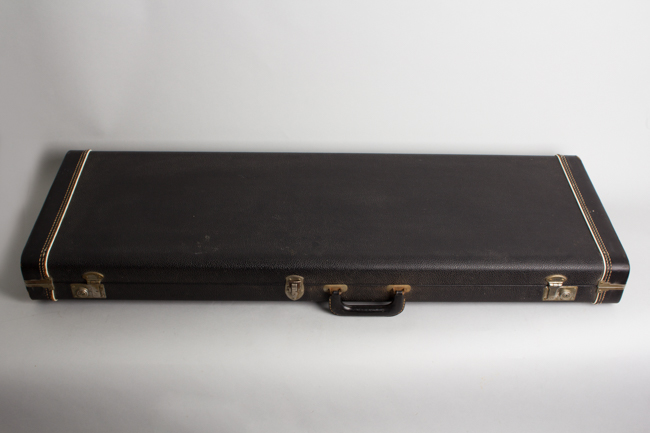 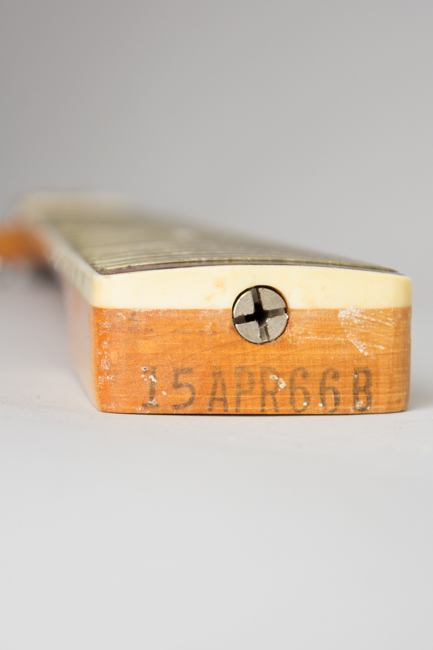 This beautiful early-CBS-era Custom Color Jaguar shows some wear for its 55 years on the planet but remains in superb playing condition, and visually is a stunner. The instrument was the top-of-the-line Fender guitar available in 1965-6; a Jaguar finished in Blue Ice Metallic, one of the rarest of the company's 1960s Custom Colors. "Ice Blue" is pretty much a CBS-era color, introduced on the 1965 custom color chart replacing the subtler non-metallic Daphne Blue. It is a light, almost silvery shade; this one has hardly any greenish cast from the yellowing of the overcoat and retains a truer color than many.

This guitar was built just over a year after the Fender sell-out to CBS in January 1965, only subtly changed from a Pre-CBS example. The stamped neck code is 15 APR 66B and the pots date to the 12th week of that year. Typical late '65-early '66 features include a bound fingerboard with pearloid dot inlay (recently changed from the unbound "clay" dot style) but still the old style thin lacquer finish on the body and matching headstock face. Other features include the gold transition logo decal, newer in-house "F" tuners replacing the earlier Klusons and a pickguard made of ABS plastic instead of the nitrocellulose used earlier.

Even having undergone a revival of sorts in recent years, the Jaguar remains a somewhat under-appreciated guitar with several interesting features. A custom-color Jaguar was a fretted status symbol in the early/mid 60's, but by 1968 the Stratocaster and Telecaster had re-emerged as the dominant Fender instruments. One reason is the Jaguar's scale length, shorter than other professional-grade Fender guitars at 24". This was designed to enhance playability, but especially combined with the Fender floating vibrato works better with heavier gauge strings. The twin-circuit wiring is also shared with the Jaguar's ancestor the Jazzmaster, but the guitar actually feels and sounds quite different.

The unique Jaguar pickups with the metal "claw" baseplate are optimized for clarity and crispness, another factor that led to the model losing popularity in the late '60s as twang went out and distortion and crunch came in! The flip-up Fender mute is actually quite functional as these systems go, but few players had any use for it. Nevertheless, this was the top-of-the line '60s Fender and a very high quality guitar. With its silvery blue metallic finish and chrome accents, this is a real California hot rod for the ages -- one of the coolest Jaguars we have had.

This is a relatively clean guitar overall, and remains original except for some small bridge components. The finish has light checking overall and a number of dings and chips, some of which have been touched up over time. The most notable are a fairly deep gouge on the back and several spots just above the vibrato on the face. There are also a number of filled chips along the body edges. Like most such attempts these touchups do not match the body finish exactly, but do help give the guitar a neater look overall. The painted headstock face remains comparatively clean with just a few tiny dings and chips.

The clear lacquer finish on the back of the neck has light wear and some minor dings and dents. The rosewood fingerboard also has some very light wear in the lower positions, the original frets have been crowned down lightly but still play well. The mute foam has been neatly replaced and works well (if you want it to!) while the foam pads under the pickups have also been renewed allowing proper height adjustment. All parts appear to be original except for the length adjustment screws on the bridge and possible some other saddle components (these tend to get replaced if corroded, which can make them hard to adjust). The snap-on bridge cover is missing.

While this beautiful Jag shows signs of use, whoever played it took good care of it. These 1960s Fender Custom-Color finishes are prone to discoloration over time as well as chipping and flaking with use and many were worn and refinished decades ago. While not a perfect survivor this is still a super cool Jaguar, from the last really classic year one of the harder-to-find colors. Besides its sharp looks this is a great-sounding guitar, a lovely and rare Jaguar still resplendent in the correct 1966 no-logo, red-lined black Tolex case. Overall Excellent - Condition.
×