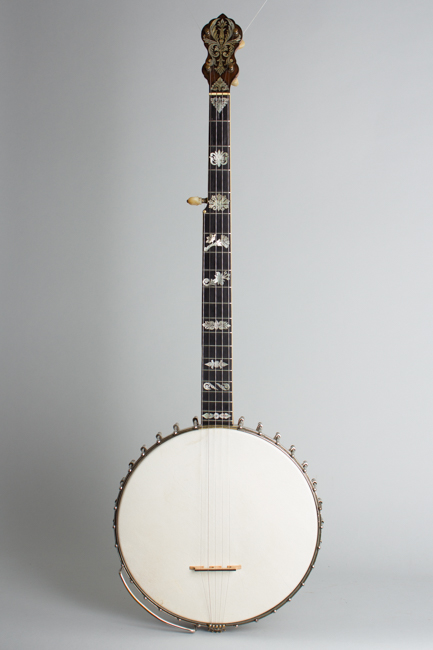 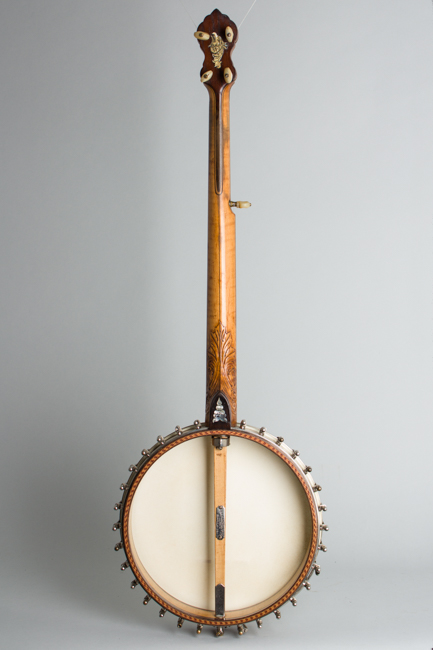 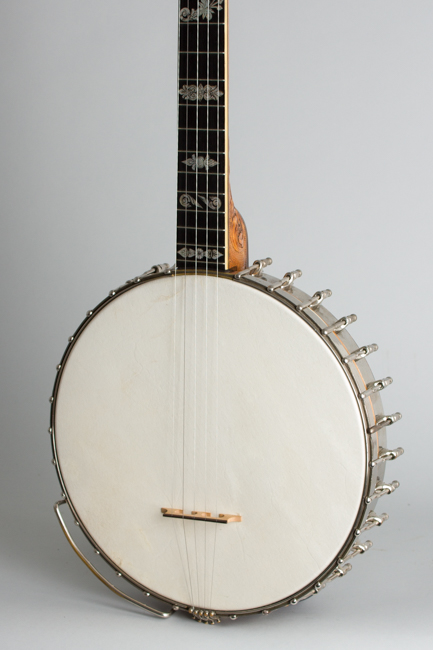 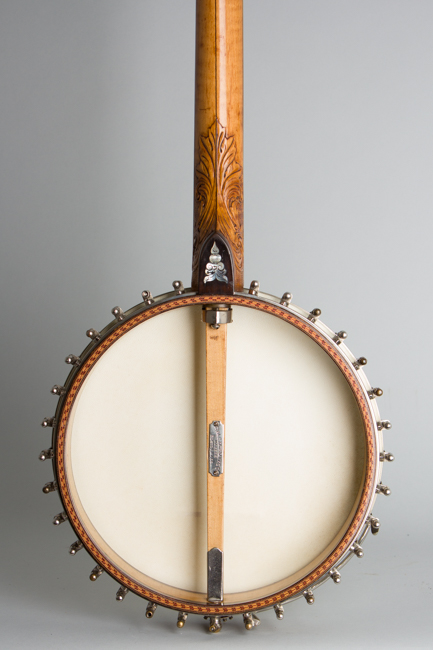 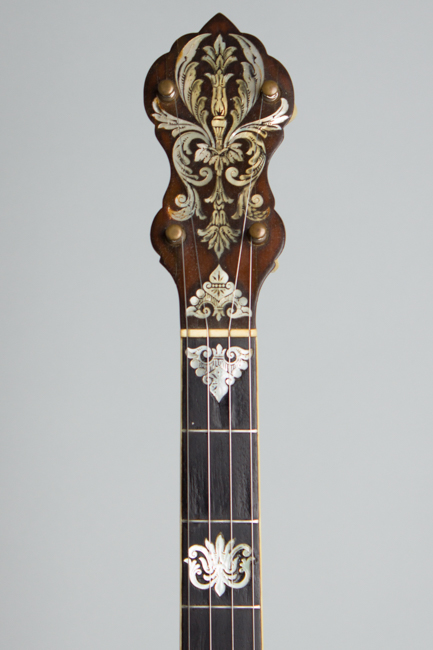 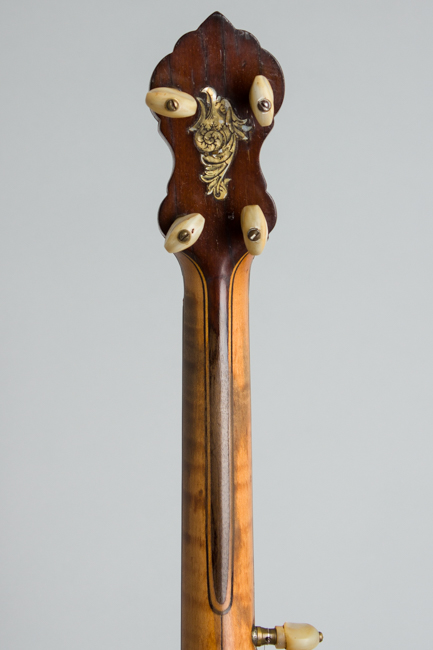 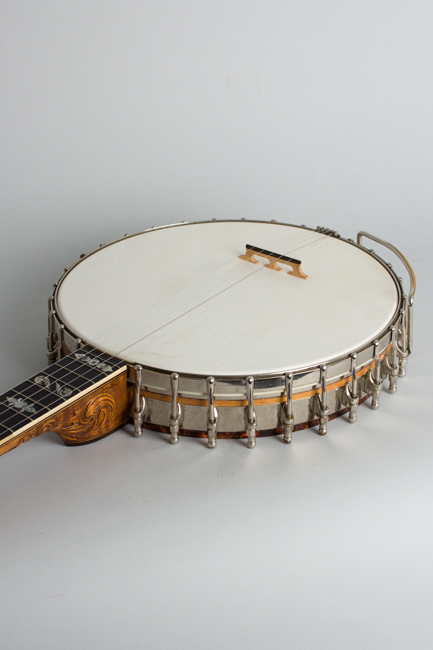 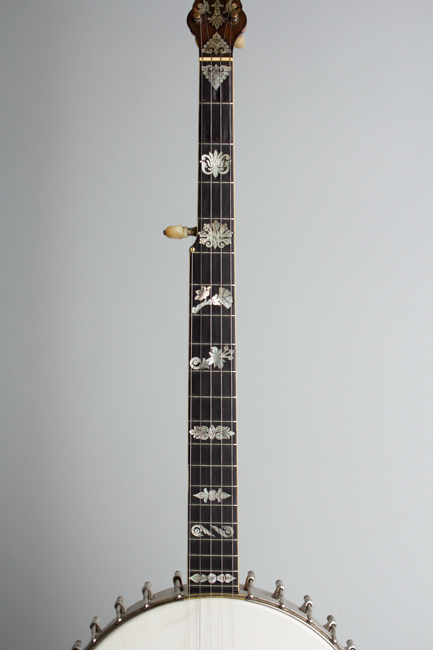 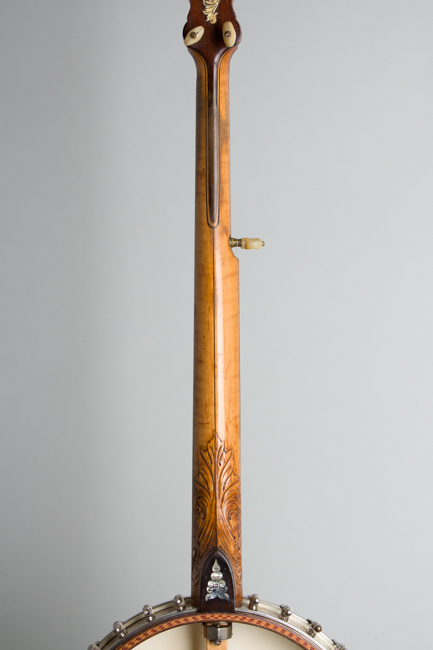 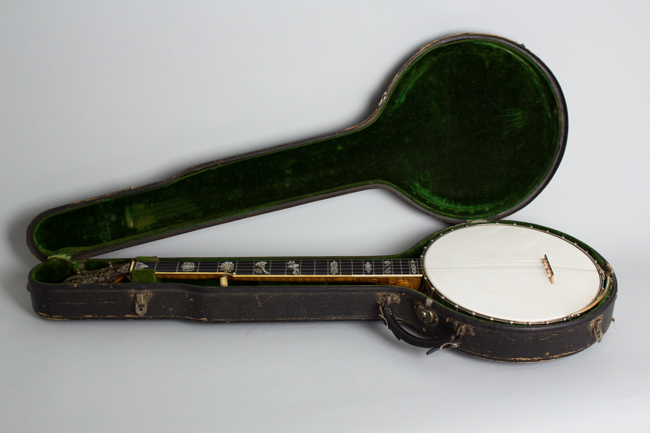 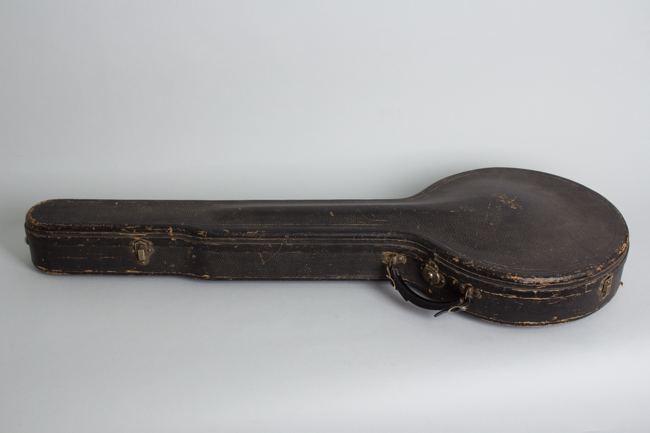 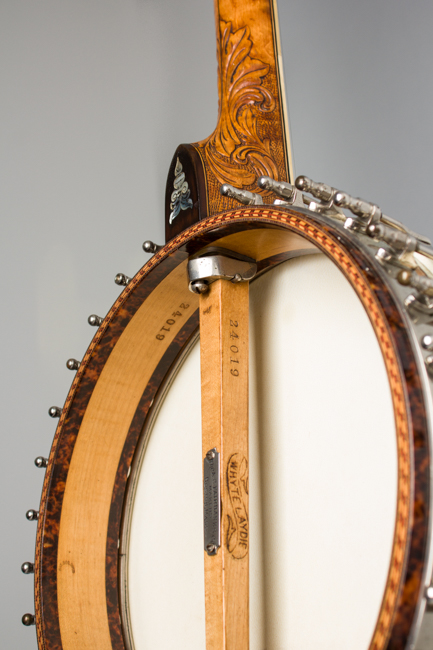 This banjo is a splendid example of one of the most desired of all openback 5-strings-the Fairbanks Whyte Laydie #7. With its large (almost 12" diameter) rim and long 28" scale this instrument produces a sound that few other banjos, new or old, can match. It is also a feast for the eyes as well as the ears! The #7 is an exceptionally beautiful banjo, with the elaborate early style hand-engraved pearl inlay on the headstock and fingerboard including the famous "gryphon" design on the headstock rear. The heel is elaborately carved in a floral pattern with a pearl-inlaid ebony heelcap.

The rim is equipped with Fairbanks' patented bracket band with the shoes are mounted to that, not drilled through the rim. The rim itself is fitted with the "Electric" tone ring that was the finest of its time and still a standard today. It is capped with tortoise celluloid on both edges and has elaborate herringbone marquetry along the bottom. This model was mostly the brainchild of David Day, chief engineer at Fairbanks and arguably the most important if unsung banjo designer of all time. His instrument innovations have been widely copied for decades, yet few banjo players even know his name. Still 100+ years on the Whyte Laydie #7 remains one vintage instrument that instantly justifies its stellar reputation as one of the finest of "old school" banjos ever made.

This banjo remains in splendid original condition with some average wear and some light repair, but is very fine for being over 110 years old. There is a filled hole for a resonator mounting pin under the "Fairbanks" nameplate on the dowel stick, that is the only notable repair. The original varnish finish on the neck shows some wear down to the wood in the first position area, and the fretboard has some light divoting in the first position. A small piece of binding has been replaced on the bass side of the neck near the rim. The frets appear original with some light wear, some small chipping is evident on the fingerboard. The plating is relatively well preserved overall with the most loss on the wire armrest.

The hardware is mostly original and correct; just under half of the original and superbly elegant cobra hooks have been replaced with slightly later period Fairbanks/Vega hooks. The tailpiece is a period No-Knot and the hoop has been lightly notched where it is mounted. The original pearl-button friction pegs are fully intact and functioning. Set up with a genuine calf skin head and newer bridge, this banjo is an excellent player with the absolutely fantastic sound these are known for. Includes a very fine original "bump" HSC, which is somewhat rarer than the instrument itself! Overall Excellent - Condition.
×